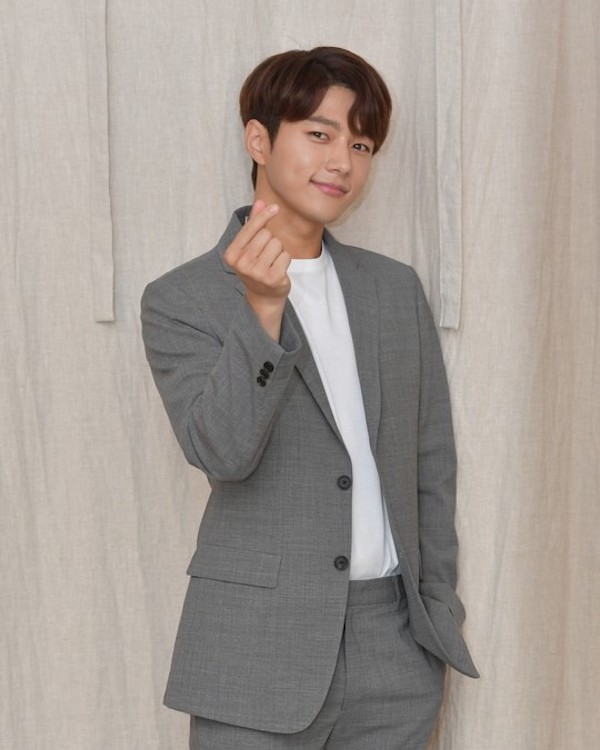 Infinite’s L (Angel’s Last Mission: Love), also known as Kim Myung-soo, will be returning to dramaland with KBS’s upcoming 2020 project, Welcome. Based on a 2010 web comic by the same name, Welcome is a fantasy rom-com about a cat who turns into a man and a woman who resembles a puppy. In Korea, having a “puppy face” usually means you look sweet and kind (rather than looking like an actual shih tzu or poodle).

L will be playing the male lead, a character named Hong-jo. The female lead Sol-ah (who’s yet to be cast) takes in what she thinks is a regular cat, only for her to see that he can transform into a handsome man. He’s a warm character who wants to heal Sol-ah’s emotional scars. As they cohabitate, he makes efforts to help lift some of the weight of her daily emotional struggles.

I’m excited because L has shown steady growth as an actor so far, and I enjoyed his take on a lovable angel in Angel’s Last Mission. After the bomb that was She’s So Lovable, I didn’t think he could ever recover, but my opinions have changed after his most recent drama so I’m looking forward to his cat-human acting. All they need to do now, to make me really happy, is change the female role into a male role, and cast Yoo Seung-ho so that we can have a cat-bromance fest.

KBS Monday-Tuesday drama Welcome, directed by Ji Byung-hun (House of Bluebird, Big) and written by Joo Hwa-mi (Introverted Boss), is scheduled to begin airing in March 2020. For now, the plan is to finish lining up the main cast and begin filming by the end of this year.

I look forward to L failing to act in another drama.

Agree. He is better than before... Doesn't mean he's become good.

LOL at your suggestion who plays the puppy. XD

I can't imagine having a cat (even a normal one) who wants to heal you. My cat's language of love is 0.00001 seconds of belly-rubs followed by blood and pain.

OMG Is your cat my cat? Every time I pet Kimchi, he expresses his love by digging his claws deeply into my nearest body part.

He also hides behind the toilet to swat my bare butt. Kimchi is kind of a jerk (in other words, he's a cat).

I will give him this though - the belly is not a trap, and it has a black exclamation point on it so it's very tempting to touch! And he loves Pippin. And he's still technically a kitten, so...

Isn't the exclamation point a universal sign for danger though? LOL

Oh. You may have just nailed down my problem.

It sounds like the same cat. LOL mine also follows me everywhere. I'm not sure if it's due to affection or the lure of free-flowing blood.

I have one like that, too, Bbobbo. Once he gave me a serious infection that required antibiotics 😾

The thing is we always, ALWAYS without fail, go for that 0.00001-sec belly rubs
lmao

... My cat died a year ago but every time I was upset he would know and sit closer to me or on me.
His mother, who is still alive, and I have become sort of closer over the last year and a few weeks ago I had a melt down. Four times within half an hr, she came up to me and put a paw on my chest, particularly when I started crying harder... She never does this and isn't that kind of cat normally so I can only assume she was doing it out of some kind of comfort.
Patting a cat is also good for both parties blood pressure and I always sleep better with a cat on my bed, so hilariously for me, cats do heal.

I agree that he's really growing and improving as an actor! This show sounds really cute. This though?

"change the female role into a male role, and cast Yoo Seung-ho so that we can have a cat-bromance fest."

I wouldn't mind that casting choice but keeping the romance :)

Isn't this the drama that was supposed to be Yook Sungjae's (which he accepted then had to back out of)?

Yes I think so! And supposedly Park Eun Bin was attached as the female lead, but it seems like that's all changed (since she's been announced to be in a drama with Nam Goong Min). I was hoping she'd still be on board, since she was so charming (and puppy like!) in Age of Youth

I'm glad. PEB is much more in NGM's caliber than L's.

Oh, as in you think she's a better or worse actress? I haven't seen any of L's dramas so I have no reference point. I will say based off of drama premise alone, though, I would have wanted to see her in this one because I think she has this natural vibrancy that seems to vibe well with this female character's description. Whereas in the other drama, I'm struggling to find out where the female character fits into the plot.

She is a much better actor than L. She and NGM can both be considered veterans.

Haha I totally thought the same thing about YSH. He should at least make a cameo!

I never had a cat that wasn't neutered so mind immediately went there.

Hahaha. This reminded me of Rim's face when he realized the implications of being dressed as an eunuch in front of Hae Ryung.

Will this probably be not the best but am i still gonna watch it and be disappointed despite knowing it won't be the best? Yes. Kim Myung Soo has improved a lot though, and I like him without reason. There, you have it. Also, a cat.

What I like about L is that he takes on different roles every time instead of just sticking to the same pricky chaebol type of roles. And he is different in each of these roles, be it mannerism or look that makes me forget he is L but truly the character he plays. That being said, he is better in some roles that others. I absolutely did not like his acting in Ruler Master of the Mask but was totally smitten by his angel in Angel's Last Mission. My favorite persona of him though, ironically, is Siu in She's So Lovable (haha, why is that a bomb, tineybeanie?). Nevertheless, looking forward to this because it sounds all kinds of cute. Also agree that Yoo Seung Ho should make an appearance.

I hope this will be more like Marriage, Not Dating than Introverted Boss.

I think in its earlier iterations this was called Man Who Toasts Bread and was supposed to air on TVN. I don't know what that means for the story, though.

INTROVERTED BOSS had a great concept but poor execution. I still think of that drama every time I see Yeon Woo Jin in a dark hoodie. I loved him in that role.

Hmmm, so the Man Who Toasts Bread is really a Cat? It almost sounds like a Ghibli movie. XD

I agree about SHY BOSS. The basic concept was good but the backstory was a gigantic mistake which destroyed the comedy.

MARRIAGE NOT DATING is still one of my favorite rom-coms. That the two shows had the same writer is almost incomprehensible.

Here's hoping that the writer can avoid the mistakes made in SHY BOSS and give us another romcom comparable to MARRIAGE, NOT DATING.

I had no idea he is this famous an idol.. i thought infinite didn't do well.. because in whateveri have seen him in, his acting surely isn't..

guess.. got a good agency now.. nonstop work..
and to think chae soo bin got so much hate last year, just because she appeared in 3 projects in the same year

L didn't sign with any agency now after leaving Woollim. He's on his own.. That's what i read about him..

Infinite is B-tier at best, and this is from a hardcore Inspirit. They could have blown up but their company got greedy and/or sloppy and they lost their chance at gold. Then again, most idol fans say that about their idols, so take this all with a grain of salt. I love them to bits though and Myungsoo is my second bias...but the whole lot of them are better suited to musicals, supporting roles, or their usual singing and dancing. Everyone has their wheelhouse. For Infinite, it is NOT acting.

i just knew about the guy who appeared on genius.. i think he was the leader of the group

But that guy is insanely intelligent

Infinite might be B-tier right now but in their hey day, in the gap between 2nd and 3rd gen, they most certainly were not just B-tier.

But his voice is really not bad: https://www.youtube.com/watch?v=iSrzbnUTaNQ

I just realized the timetable now. I thought after SBS and MBC's decision to discontinue Monday-Tuesday dramas KBS also announced that Tale of Nokdu would be their last Monday-Tuesday drama. I am glad to see that they are more giving a break rather than giving up altogether.

The couple are a man who turns into a cat and a woman who is a puppy? Why does that sound so familiar? I'm sure I've seen that somewhere before...

Also, if I got myself a new cat and he randomly turned into a man, I would be very annoyed. Even if he looked like L.

Yeah, me too.
More litter to scoop out of the box.
#unexpectedbudgetaryproblems

But then you don't have to deal with hairballs...

Question: Isn't this a japanese movie or drama? Or maybe it was chinese.

guys! he's cute and sometimes imma just need some cute in my dramas! i like the guy and i will watch cause it sounds interesting?

I hope to see same love team again the DanYeon couple.I cant get over for their best team up perfomance and i love them both.Je-bal..

It seems that L is becoming a bit typecast- this character sound somewhat similar to Angel Dan.

But to the naysayers I just want to say this- he did some seriously good acting in ANGEL'S LAST MISSION. He is not my very favorite actor but I think he deserves a little more respect.

I don't know where drama people get cuddly cat tbh.. The plot is just meh.

I actually like if an actor/actor-dol is not type-casted but in Myungsoo case, he should be typecast until he gets better (skills) as an actor....