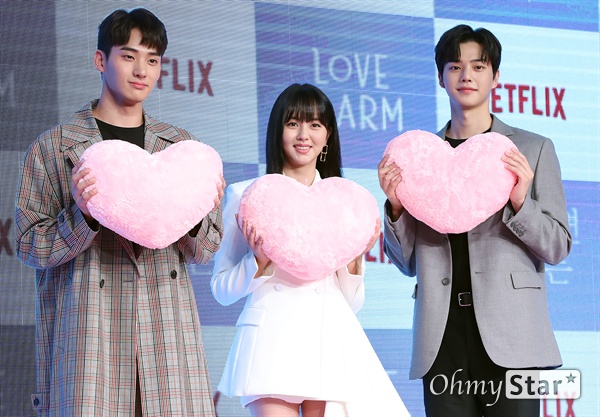 It’s been a long wait, but Love Alarm is finally about to hit our screens. Adapted from a popular webtoon, the drama centers around romance, unrequited love, and the huge–sometimes disruptive–role technology plays in modern life. The story’s catalyst is a popular dating app that sends notifications to the person (or people) you like whenever you’re within 10 meters of them. Kim So-hyun stars as a young woman who does her best to show the world her bright, happy side. She lost her parents as a child but she keeps her pain and emotional scars wrapped up. When she encounters Song Kang, her app pings and it looks like the start of a romance. But their potential relationship is complicated by the fact that Song Kang’s best friend, Jung Ga-ram has had an unrequited crush on Kim So-hyun for years. Despite having been friends since they were kids, or perhaps because they’ve known each other for so long, Jung has never told Kim about his feelings for her. But when he learns that his best friend and is interested in Kim too, he tries to step back and respect their feelings. However, it’s difficult to predict where your heart may take you, so I’m expecting a lot of sweetness and heartache.

Kim So-hyun is back, sound the alarms!
I've watched the first three episodes, and I will totally be sticking around until the end, but I don't like a lot of the characters so far. Jojo is complete gold, so I'm genuinely sad that she has no legitimate support network. Also, the hero is... a very pretty giant baby.

There is just soooooo much content. When am I going to sleep, or you know, go outside.

Outside? Is that a thing these days? When did they invent it?

I'm excited to see my favourite actress once again. No sleep for me today!

Lolz can totally relate. Went out of town to rejuvenate, but of course what better way to “rejuvenate” but binge on some more dramas! #nosociallife #stillnotenoughtime #whoarerealpeople

May be I should be thankful for viki slow subs because I have free days :))

I tell myself, ugh it's just too hot to go outside anyway!

The high school arc they are just 18 so him being a big baby for now is justified. This drama is a lot darker than I was anticipating. Jojo is making me cry buckets of tears why are their lives so sad? T.T

I know! I have to say, I'm finding the latter half far more compelling.

Omg, I just saw the first episode, and this was precisely my reaction, why is it so dark.

Watch it slowly and try to absorb everything the drama offers. It’s totally worth it

I found my weekend binge! Since I have had minimal luck committing to anything 16 episodes this summer, let's hope I can focus for 8.

I've cried so much while watching this 😭😭😭😭

You never add MBN dramas, one is also premiering this week: Graceful family!

It is available English subbed at OnDemandKorea under the title ELEGANT FAMILY.

The response on twitter has been absolutely explosive. I'm myself surprised by how much I like it! Can't wait to hear beanies thoughts. Will we get recaps?

I was surprised to see it in Netflix, and to see, out of a sudden, 8 episodes!
Now I understand. Well, it is interesting, it is like a mini drama....
Maybe I will check it out....

Be prepared to cry A LOT 😭

Ahh, I want to jump on board, but I’m already watching a high school drama right now. I should probably wait a bit.

Is the eight episodes its entirety, or is this a multiple seasons thing?

I hope the will make the second season because this one is not completed yet. The ending is hanging up there in the air with all the questions unanswered. It's still a good show to watch though if you have time to spare. But I'm so turned off with this kind of ending and no news about Season 2 yet for us to know if it'll still continue to answer our questions.

It feels like forever, I miss my baby dongsaeng so much on my screen. Glad she is back and looking like a dream. 😘😘😘

A disclaimer should have been added. Love Alarm was always meant to be a multi season format like Kingdom so don't expect a proper conclusion either this season or the next. They've only covered 3 of the 7 volumes of the webtoon and there will be more volumes as the writer is now recovered from her illness. She's already started to write again and the director said she has every intention of covering the entire webtoon. Be prepared to invest 2-3 years into this drama if you start it. This won't be like First First Love with 16 episodes split into two halfs. They haven't even scheduled a filming date for season 2 yet. They can't start filming before next year because the actors are not free.

whut?! This will span for more than two seasons? I don’t think my heart can take anymore of the angst though. I really can’t stand seeing Sun Oh in pain for so long and this going back and forth between two best friends isn’t going to fly with me. @fleecestorm @alasecond tagging as we’ve been discussing about the show’s seasons...

I saw the first episode and this drama is not fluffy or lighthearted at all, but Damn, lol

my heart is already breaking for these kids. 💔

I CANNOT WAIT to watch this! Kim So-hyun is my favourite!

I have seen the first two episodes and so far so good. My wife and I really enjoyed Kim So-hyun's performance in BRING IT ON, GHOST. This looks like it will be fun.

I binge watch the whole 8 episodes because of the 3 amazing leads. And the more I swoon about the romances, the more I cringe about the so-called ending. No spoiler but it's not even an open ending. Things demand for a 2nd second which is not even planned yet. I hate being kept hanging like this. Has anyone read the webtoon and do you know if it's finished yet or still going on?

The whole damn reason I watch kdrama is because they have an ending. Good, bad, reeeally bad, they all END. Color me annoyed about this trend towards multiple seasons. ITS THE WHOLE POINT OF THE FORMAT. ok, maybe more than annoyed. I watched the first ep and was totally invested, but I just can't get behind this cliffhanger thing. blegh.

And this is one of the main reasons I don’t watch my local shows. They can go on forever with multi-seasons! Last I invested in a local show was Smallville and that had 10 seasons. 10 long years to finish this show and Clark-Lana and Clark-Lois thing eventually tired me out. When I discovered K-dramas, I dreaded coming back to Smallville whenever a new season came out, but wanted to finish it just because I used to love the show.

I can already tell I’m not gonna last long we’re gonna go on with this juggling between Sun Oh and Hye Yeong.

Delurking to say: I left American TV because of the dragginess of multi-season shows, where producers would milk as much as they could from characters even when there was no more story.

I really hate this Netflixing of Kcontent. I hear the other teen show too, My First First Love, with Jisoo, is also similarly afflicted. Leave Asian TV alone Netflix!!!

I watched it in almost one shot! This was not my original intent. Haha