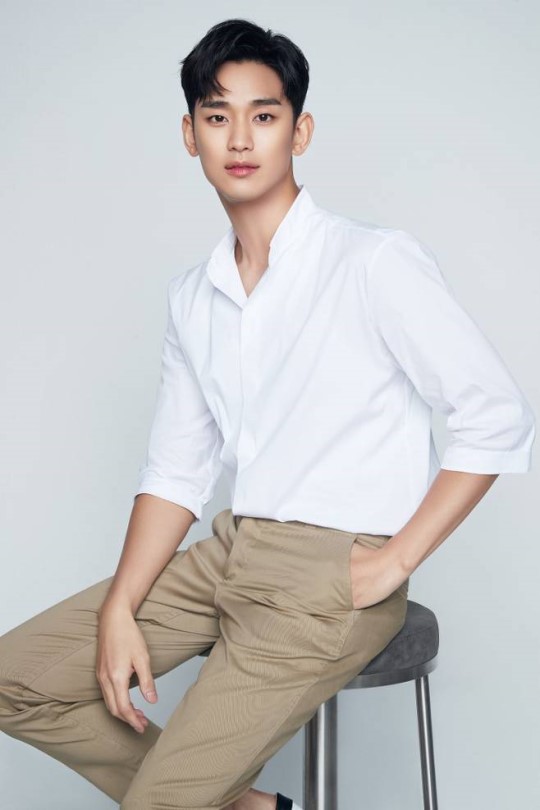 Since completing his army service this past July, one of the dramas that Kim Soo-hyun (The Producers) has been considering is tvN’s Psycho, but That’s Okay. Nothing has been officially confirmed, but according to a source at tvN, Kim’s casting is pretty much a done deal.

The part that has been offered to the actor is Moon Kang-tae. Good-looking, smart and capable, the character works as a psychiatric ward caregiver and lives with an older brother who has autistic symptoms. The story sets off when Kim meets a children’s book writer suffering from antisocial personality disorder and the two develop a connection. As they learn to embrace each other’s challenges with love, they heal and grow from past emotional scars, and rediscover their own souls and identities in the process.

Aside from a cameo appearance in tvN’s Hotel del Luna, this will be Kim Soo-hyun’s first project after his army discharge and his first drama since KBS’s The Producers in 2015.

tvN drama Psycho, but That’s Okay is currently being planned for next year, and PD Park Shin-woo (Boyfriend, Jealousy Incarnate) is attached to direct, with writer Jo Yong (Jugglers) to pen the scripts.

Tags: It's Okay to Not Be Okay, Kim Soo-hyun

Hmm, I hope they change the English title. It seems misleading and inappropriate, especially if this is about acceptance and healing, and showing people with autism and mental or personality disorders.

It is indeed very mistleading,i for one once reading the title i actually believed he would play a murderer and actually imagining him playing a dual role like that...Hope they will find a more suitable title...(also a bit far fetched as i can't talk as the standard but somehow hints how SK sees/thinks of those who have special needs)based on how they named the title inselved....

It's probably just a play on the very popular Korean film I'm a Cyborg, But That's Okay. It's a movie with Rain that is also set in a psychiatric ward.

Sounds vaguely like "It's Okay, That's Love". Who's going to be the female lead in this?

Park Shin hye has been offered the role

No she didn't. Her agency put out a statement saying she was never offered the role.

That would be awful actually.

I absolutely loved Boyfriend, I hope this is good!^^

The king is back!! *happy tears*

KIM SOO HYUN! ahh i missed you. I'm a huge fan of Jugglers so I'm pretty much sold on this drama. I really hope he takes it, his cameo made me realise how much i miss him on my screen. i heard PSH might be the female lead but i don't think it's possible as she has already been casted for another drama, oh well maybe next time!

The biggest comeback news is KTH. Where is the news about that?

This may also be KSH's first drama in 5 years. Male actors have a larger drama audience so I wouldn't say KTH comeback news is the biggest, she's not even known for her acting.

Funniest thing ever is that I know who Kim Tae hee is. The only drama I've watched of her is Yong pal and I didn't even finish it. Male actors dominates Korea thats why their comeback is always a big news

I’VE DONE MY WAITING!! 12 YEARS OF IT!! IN AZKABAN!! My King of Kings is BACK and I am over the moon ♥️ I’ve been waiting for news since he first got discharged (looking gorgeous in his uniform, might I add), but I’m not sure how I feel about this project or the fact that Park Shinhye has reportedly been offered female lead. I’m not her biggest fan, and I’ve only ever successfully finished 3 of her dramas, so I would be lying if I said I wasn’t hoping for someone else :(

I’m also not overly fond of medical stuff, especially in the context of a drama, because I’m always extremely sceptical of the actual science behind all of this and of the way the writing will handle medical conditions—especially psychiatric ones.

Some of the information is a little concerning for me. The inclusion of autism, for example, makes me a little wary because, while I think it’s very important to destigmatise it, I worry that the drama will treat it as something that ought to be “cured”, when it isn’t. Same thing with the antisocial personality disorder. APD isn’t something that should be romanticised for a show. It can be quite a serious condition and I just worry about the drama’s treatment of it.

If KSH’s casting is confirmed and the drama pushes ahead, I’ll probably still tune in because I love him so much. I have to admit, I was really hoping for something else though.

Oh, oops, just read that Park Shinhye wasn’t actually offered the role! My bad—should’ve been more careful about that. I wish her the best for whatever project she works on next!

I jumped with excitement when I found out she wasn't offered the role. I've tried to like her acting since YAB but I just don't. She's too wooden. I hope this goes to an experienced actress like KTR.

This is fantasy romance. I think the medical stuff is just the backdrop and not the focus of the show. Also curious who the female would be if he signs on.

And welcome back KSH! His one minute cameo was just fabulous and shows what a charismatic actor he is. Such insane screen presence.

Some of the names being floated for the female lead are Kang Sora, Yoona, Nam Jihyun, Park Boyoung, and Go Ara. I am very much ok with any of them. Kim Jiwon and Lee Sungkyung would also be great.

I would love to see Kang Sora as female lead.
Hasn't seen her in a good drama since Misaeng a long time ago..

It's not going to be Lee Sung Kyung. She's confirmed for Romantic Dr. Kim season 2 with Ahn Hyo Seop.

Park Bo Young would be great but she's never co-starred in a drama with someone as prominent as Kim Soo Hyun. All of her three prior male costars were all in their first lead drama roles (Jo Jung Suk, Park Hyung Sik, Ahn Hyo Seop).

and Werewolf Boy movie with Song Joong Ki... why does everything have to be done according to 'status' anyway?

I stand corrected about Jungle Fish but she hasn't starred with someone as prominent since in a drama. Werewolf Boy was a movie, not a drama. She also starred with Lee Jong Suk in Hot Young Bloods.

@fogcity Also Its about the money as well. I remember someone said something here only, that usually a dramas budget doesn't allow them to pay two prominent, well established actors so they choose one established actors like Park Bo Young and the other who is a rising star I guess, like Park Hyung Shik in SWDBS and Ahn Hyeo Seop in Abyss.

Out of this list, Kim Jiwon is probably my top choice. I'm not big on Yoona or Go Ara's acting sadly, and I feel like he might overshadow them :(

In an ideal world, I'd have Seo Hyunjin or maybe even Jung Somin.

Kim ji won sounds good but I really like Go Ara as well because I thing she was amazing in reply'94. I loved her portrayal of Sung Na Jung. Haven't watched her in anything else sadly so can't say much about her acting in other dramas.

BECOME BIG HITSSS ... 9+M korean people watching ... SO I DONT THINK SHE HAVE ANY PROBLEM WITH ACTING ... JUST She love weak character in Drama !! Dunno Whyy ..

to each their own I guess? being a box office hit/having lots of people watch something doesn’t really mean much about the quality of someone’s acting imo

personally I feel like she’s not particularly good and that there are other actresses with less fame who are better but that’s just me!

"Some of the information is a little concerning for me. The inclusion of autism, for example, makes me a little wary because, while I think it’s very important to destigmatise it, I worry that the drama will treat it as something that ought to be “cured”, when it isn’t. Same thing with the antisocial personality disorder. APD isn’t something that should be romanticised for a show. It can be quite a serious condition and I just worry about the drama’s treatment of it".

Uhmm..i hope they clarify about antisocial personality disorder. This does NOT EQUATE to being an INTROVERT. It does not mean you're just not socially inept or too shy to make friends or something. It is a serious disorder..verging on criminal. Please please let us be more aware of or mental health problems..and avoid misconceptions about it. To quote from medlineplus.gov "Antisocial personality disorder is a mental condition in which a person has a long-term pattern of manipulating, exploiting, or violating the rights of others without any remorse. This behavior may cause problems in relationships or at work and is often criminal".

This was my exact thought when I read the description!! APD is NOT the same as being shy/introverted/UNSOCIABLE. When will writers learn 🤦‍♀️

I'll watch anything as long as you make your drama comeback. Its been more than five years for me as I didn't like producer. I'd like the female lead to either be Gianna jun,Kim ji won or park min young. Or even IU

IU would be a dream come true, but I think she'll sadly be much too busy with her album promotions and Asian tour to commit :(

The first thing that comes to mind when the words tvN&fantasy&romance&Kim Soo-Hyun are in the same sentence = Hotel Blue Moon. And I was like OH NO please don't.

Omg, finally an AvPD representation, and that too, with my hubby Kim Soo Hyun as the main lead? YES PLEASE <3 haha

Oh, wait, I misread antisocial PD as avpd, nvm... I guess antisocial female lead would be more interesting if it's a fantasy romance, but how is it going to be "fantasy"...?

Reading this , I feel there’s a lot that can go wrong . However, I trust Kim Soo Hyun to choose a clever script with nuance and emotion. Mental illness is a delicate conversation but also super important and socially relevant. I’m sure it will be okay especially if he his in it . If it was say, Lee Min Ho, who can’t choose a script for his life : then I would be very worried.

Im hearing rumours about Park Shin Hye being the female lead . I hope to the divine order that they are not true .

I thought her next project was with Cho Seung Woo.