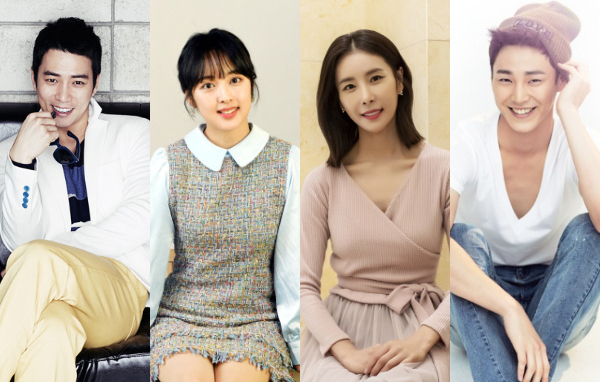 A new drama has been announced, starring Joo Sang-wook (Welcome to Waikiki 2) and Kim Bora (Her Private Life). Han Da-gam (formerly known as Han Eun-jung from Let Me Introduce Her, Golden Cross) and Lee Tae-hwan (Farming Academy, My Golden Life) have also confirmed that they will be joining the show.

Marketed as a rom-com beauty show, this drama will feature the story between an unemployed makeup artist who is constantly hounded by his creditors and a failed idol trainee who embarks upon another dream.

Joo Sang-wook plays the professional makeup artist who is a perfectionist and workaholic when it comes to his art. On the other hand, Kim Bora plays a makeup artist assistant, who is a former idol trainee who was kicked out of her company for an unknown reason after training for ten arduous years.

Han Da-gam plays an ambitious top-class actress who oozes elegance and charisma. She eventually has a romance line with Joo Sang-wook’s character. Meanwhile, Lee Tae-hwan plays a world star who has seemingly has it all—appearance, body, and humor. But when in love, he turns into a cute, awkward boy.

So, age-appropriate romance? OK, in this case, I might check it...

Kim Bora is the female lead so her character is the one that will end up with Joo Sang Wook's character (in all likelihood). She's 24 and he's 41. That's a pretty huge age gap.

Yeah, I wasn’t sure how old JSW is but I was thinking he’s too old for her.

From the article: "Han Da-gam plays an ambitious top-class actress who oozes elegance and charisma. She eventually has a romance line with Joo Sang-wook’s character. " Hopefully that will be the romantic partner for him.

I've never seen a K-drama rom-com where the male lead and female lead didn't end up together. I think the ML will probably initially date Han's character but will end up with Kim Bora's character.

Well, she literally can be his daughter, they could be mentor and mentee, friends, similar to "My Ajussi", they don't have to be lovers....

My Ahjussi isn't a rom-com though. I've never seen a K-drama that was billed as a rom-com have the male and female leads not end up together. If she was his daughter, I think they would say that in the synopsis.

I think this may be one of the weirdest quartets I've ever seen?

Joo Sang-wook was in Waikiki 2? Lol, I had no idea

Me neither! I re-read that sentence 3 times

He did a cameo in episode 2 I think. He acted as a veteran actor to Jun Ki for a sageuk.

The only rom com dramas i liked were JSW's dramas i hope this gonna be good one too.

Going to check this out for Lee Tae Hwan. He has an effortless charm that I find endearing.
I hope this is good.

My, Kim Bora likes to play the assisstant/under-ranked person to the male lead, huh? Her Private Life (high responsibility job, but male lead still is boss), What's Wrong With Secretary Kin? (her being a secretary is in the title) and Seven Day Queen (being female in Joseon in general). Not that I am complaining, it just stuck me that her three roles are working/living for the male lead.

I cannot get past romances when I know there is a huge age gap; I know happy people with age gaps, but usually I can't get past them in dramas. Plus, I realize I am less and less interested in dramas about a male lead, or "about" a female lead but where the male lead ends up becoming more interesting, dynamic and important, so I might write this off even though I love Kim Bora from Seven Days Queen.

I think you're talking about Park Min-Young, not Kim Bora...

I know Kim Bora is a raising actress but I would like to see Han Da Gam's romance with Jo Sang Wook and also see her in a lead role for a change.

I thought Kim Bo-ra will play the titular Jane in Jane the Virgin. So it's cancelled?

I will probably tune in to this since I really like all the actors respectively. I just hope the chemistry works with Joo Sang Wook and Kim Bora because the age gap is slightly concerning. Didn't realize Han Eung Jung changed her stage name. I haven't watched one of her dramas in such a long time but back in the day, it seemed like she was in everything I was watching.

Kim Bora is 24? I wouldn't be surprised if she's cast as 32-year-old because that's what the industry does. So fresh and youthful!