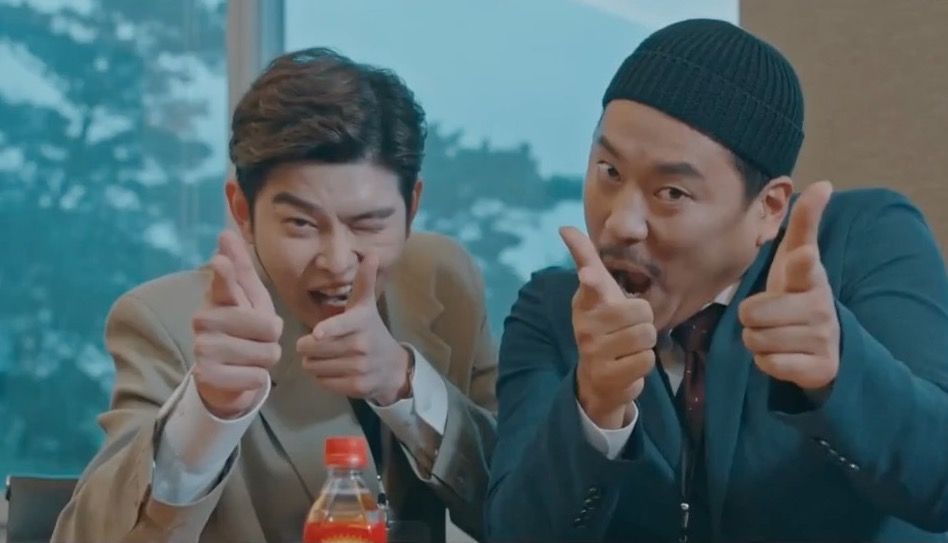 It’s that time where we catch up on the PPL that’s been lurking, living, and flashing neons lights in dramaland. Last time we checked in, we had a lot of almond milk, full-contact phone charging, and the essential instant coffee. What kind of PPL did we run into over the last few months?

I’ve always got my PPL sensor on, but it’s funny — the product placement I’ve noticed this past summer has been surprisingly suave. Outside of a few loud moments, the dramas I watched didn’t have a whole lot of hard-to-miss PPL. In fact, sometimes I had to watch pretty carefully to catch all the product placement moments (and it’s a personal rule that if you have to scour the end credits to identify the PPL in the drama you just watched, well then it’s not really PPL, is it?). This summer’s product placement was also unique in that the bulk of it focused on a whole lot of one thing: drinking.

Tea from the South American Sun (or something)

In Class of Lies, everyone from disgraced attorneys, to goody-two-shoes teachers, to Satan’s spawn students, spent their summer drinking a refreshing tea-like beverage. It took a bit of time to suss out what this tea actually was and what it was being marketed as. It’s actually been a lot of fun researching the teas and drinks that are frequently featured in dramas, and the common denominator, regardless of brand, brand family, or type of tea? Health. They’re all marketed and sold as healthy for the body, whether that means detoxifying, slimming, or just plain low calorie goodness. 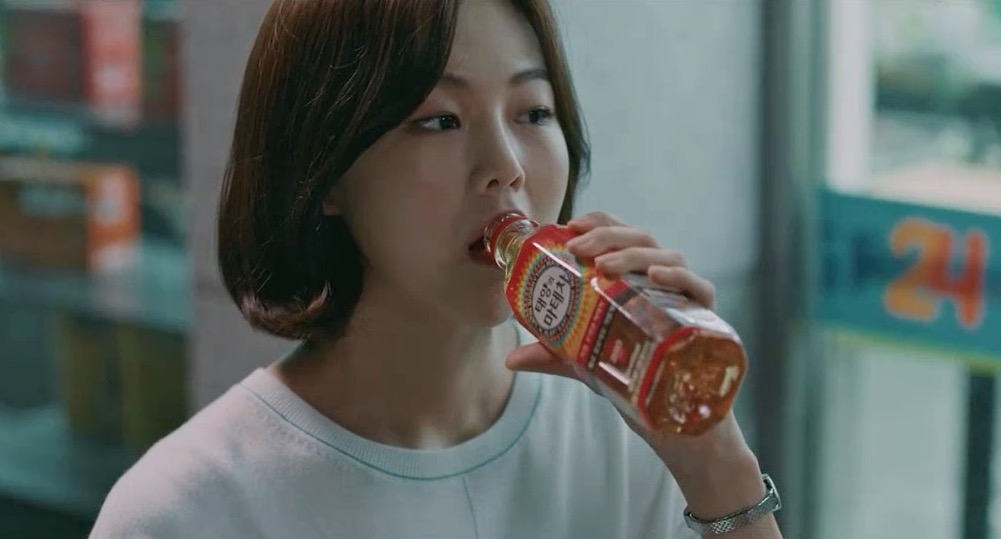 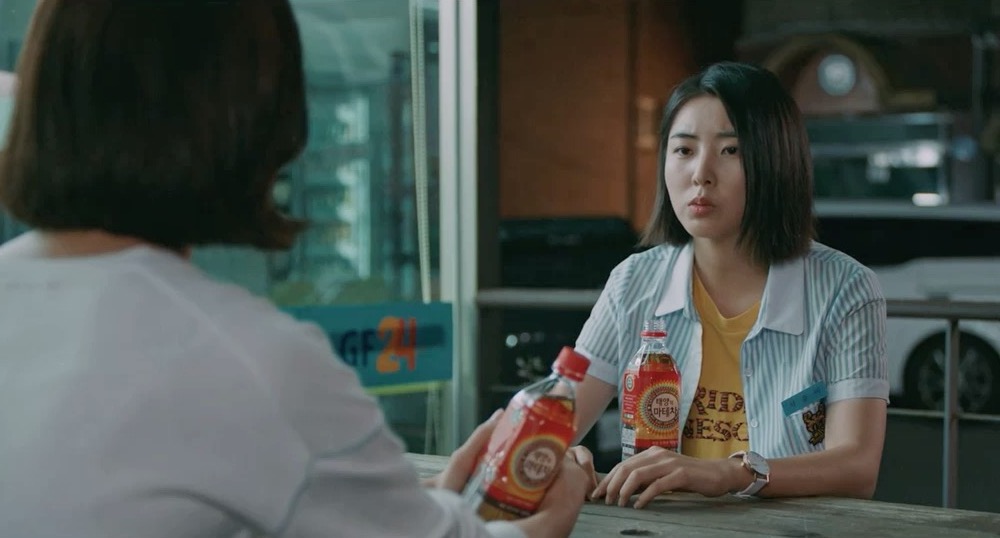 The tea of choice in Class of Lies was tricky to decode because it’s actually a yerba mate beverage. Yerba mate is a natural stimulant with a caffeine level between that of coffee and tea, and it’s sourced in South America and marketed (everywhere) as an ancient super beverage. Where it gets tricky is that LG’s name for their yerba mate drink is something along the lines of “Sun’s Mate Tea.” My brain can’t help but read “mate,” like a pal, or a pair (whereas it’s actually pronounced ma-teh). To make it even worse, the slogan and label for this tea reads (in English): “Latin Biorhythm Mate. Play! Eat! Drink Mate.” See, now you’re confused too, right? 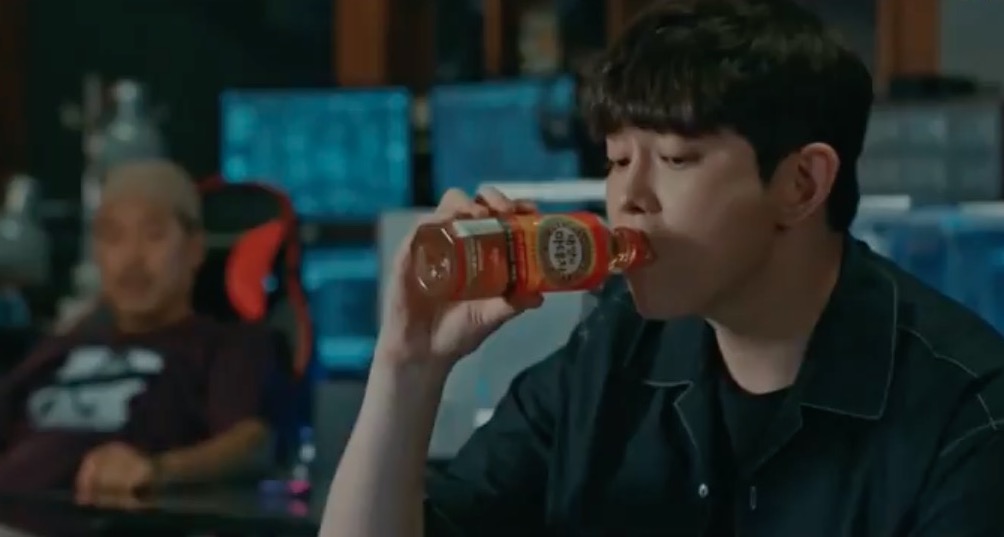 Sometimes, you run into a drama that’s rather poorly stitched together, and instead of a solid plot, it sometimes feels like scenes of characters talking to each other over drinks, one after the other. Hello, Let Me Hear Your Song. The good thing about this kind of drama is that it offers a lot of opportunities for characters to be refreshed by a beverage, given a beverage, or even forced to open a beverage for an injured love interest. 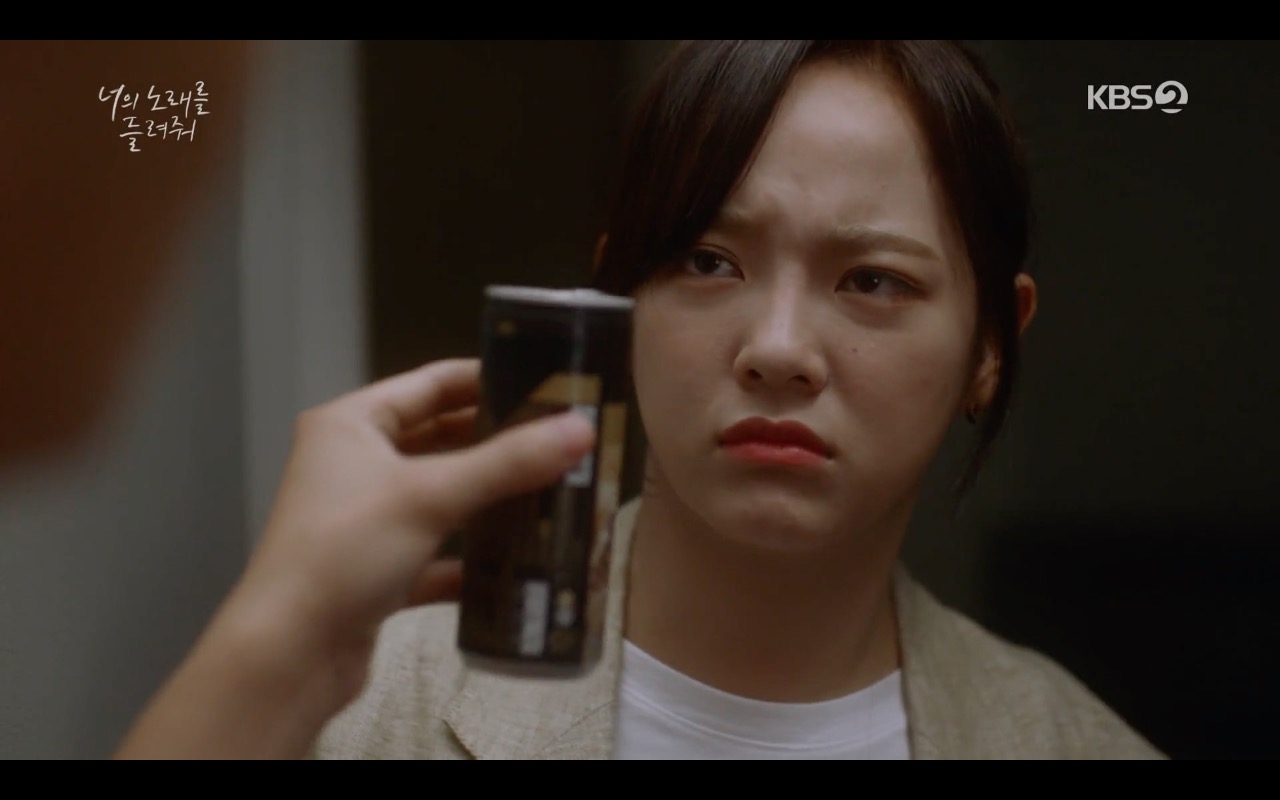 In Let Me Hear Your Song we discovered some of the most exhaustive drink PPL I’ve witnessed in a while — and with very little product repetition, which we don’t usually see (a direct contrast to the omnipresence of the Sun’s Mate Tea in Class of Lies). In Let Me Hear Your Song, we had Seagram’s sparkling flavored water, several energy drinks, and even some good old-fashioned beer PPL. If dramaland has taught us anything this summer, it’s that a cold beverage is always a good idea. Whether you’re terrorizing a suspected murdered, sussing out a stalker, or enjoying a cold one with your on-again/off-again crush — always have a beverage on hand. 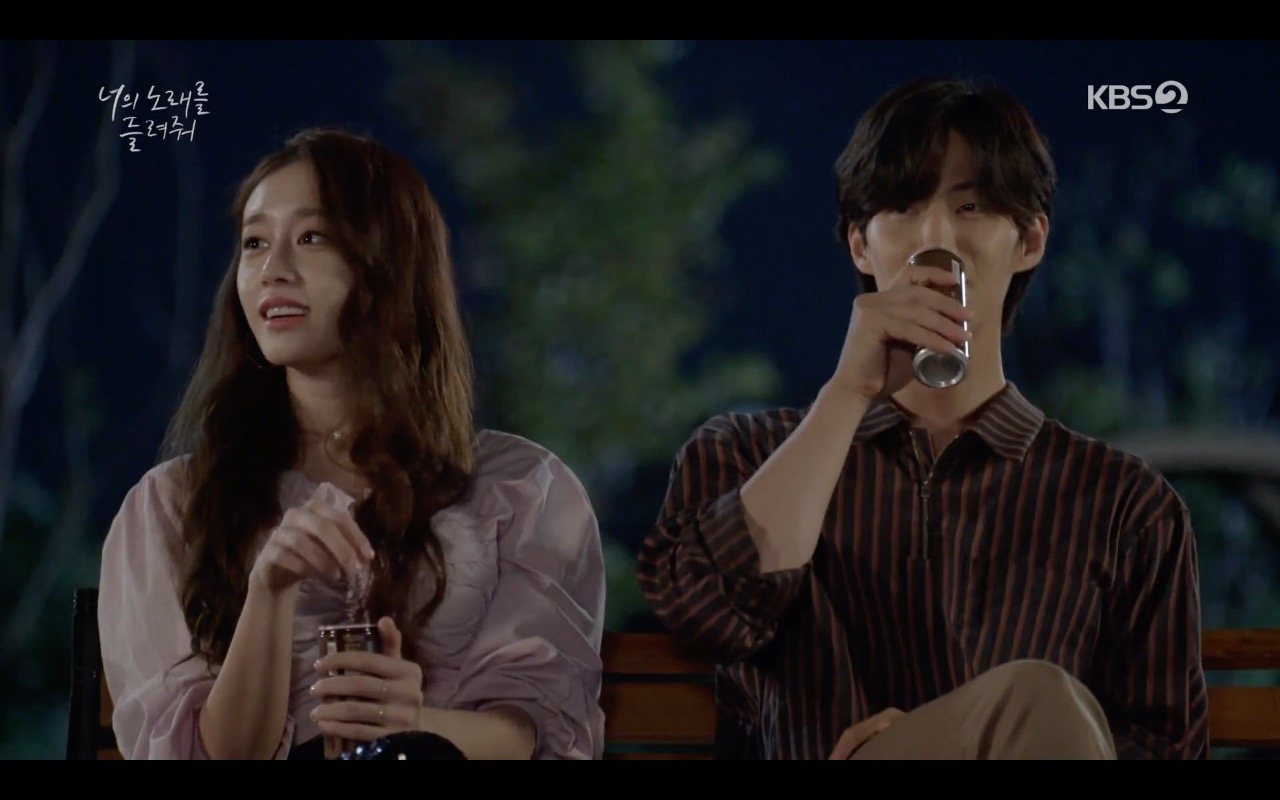 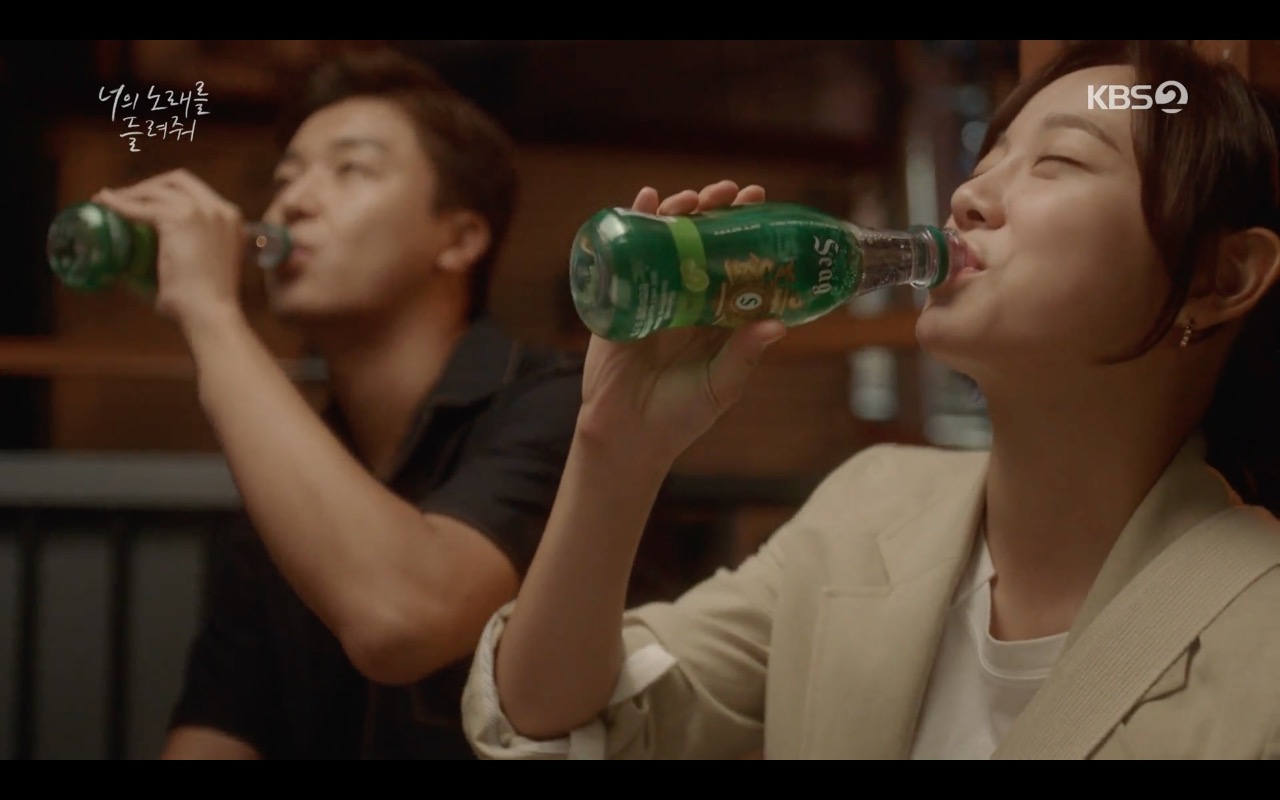 Where has all the coffee gone?

Maybe I watched the wrong dramas the last few months, but there was a staggering lack of instant coffee product placement this summer. Maybe the season is the reason, and that’s why we saw so much more cold, refreshing, tea-like drinks instead of hot coffee PPL? Either way, I learned this: you don’t know how much you love the mix coffee PPL till it’s gone. May the coffee return full force in dramaland this fall — unless the reason it hasn’t been around is because it’s in all of the Beanie Boxes instead? *teeheehee* 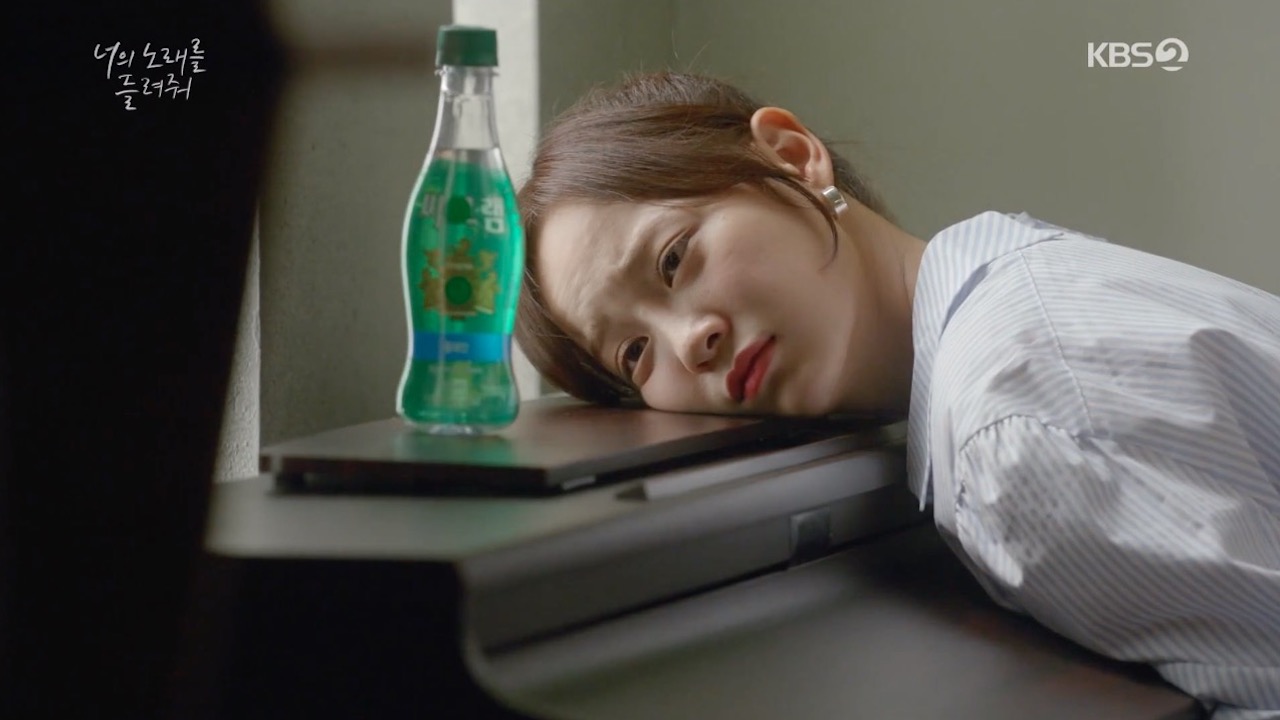 In this round-up, we might not have a lot of diversity, but we do have some rather good PPL meta. This time it’s a tie between the cheeky PPL mic drop (so to speak) at the end of Class of Lies, and the Jellypo incident in Be Melodramatic.

Class of Lies ended its stroll through Hell School with some hilarious tongue-in-cheek meta, referencing the Sun’s Mate Tea that had been seen throughout the show. Though doubtful it would happen, the show teased a second season, or “continued adventures” of Yoon Kyun-sang and his hacker pal. They appeared for a job interview where they were clearly going undercover for other case-related reasons. Before answering the questions of his interviewers, Yoon Kyun-sang pauses and says first he’ll have a sip of tea, which he opens and guzzles with gusto. It was hands-down hilarious, and having our heroes break the fourth wall (and the tension in the drama) with this kind of humor was a fun way to end a pretty dark drama. 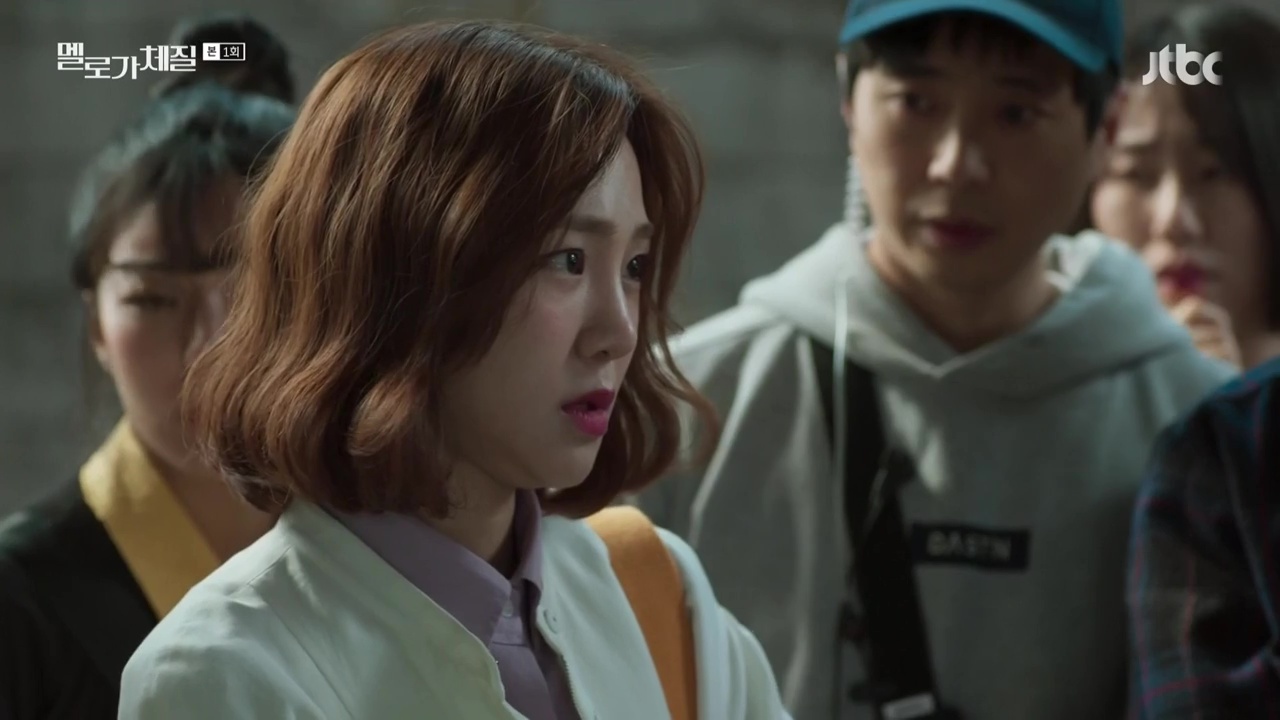 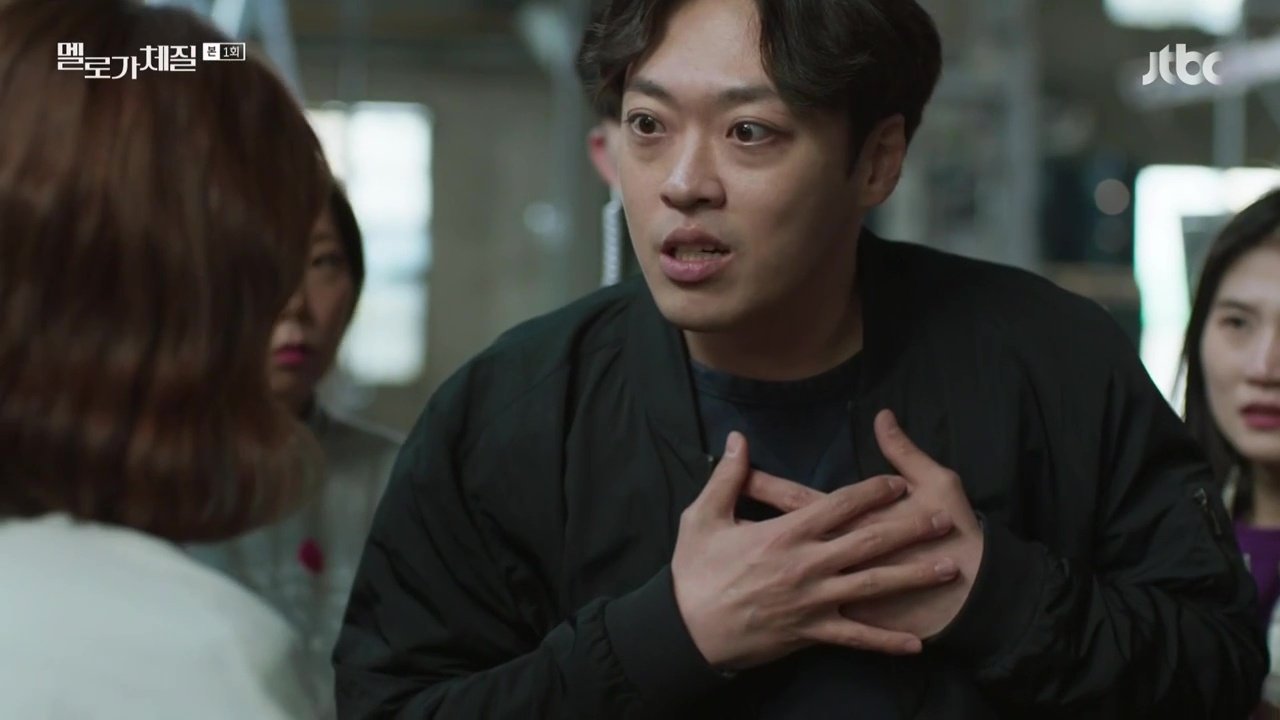 The other great bit of PPL meta was in Be Melodramatic where Han Ji-eun’s actual job is product placement. To the fury of the director, she places the product (Jellypo) right in the shot of a crucial scene. The camera is following the trail of blood leaving the hero, who has just been shot… and BOOM there’s the Jellypo. Han Ji-eun defends her decision, but in the end winds up running away from the set.

I love when dramas draw attention to the PPL elephant in the room, whether they’re being obvious and exaggerated about it, or just opening up conversation around the fact that it’s a real thing, a lucrative advertising avenue, and someone’s actual job. Which, really, can I try doing that?

These were the product placement moments that struck me over the last few months in dramaland. While I was grateful I didn’t run into any Subway, I feel wary of the PPL that lies ahead as we get deeper into our fall dramas. But don’t worry, winter parka PPL is coming soon, and I can’t wait. 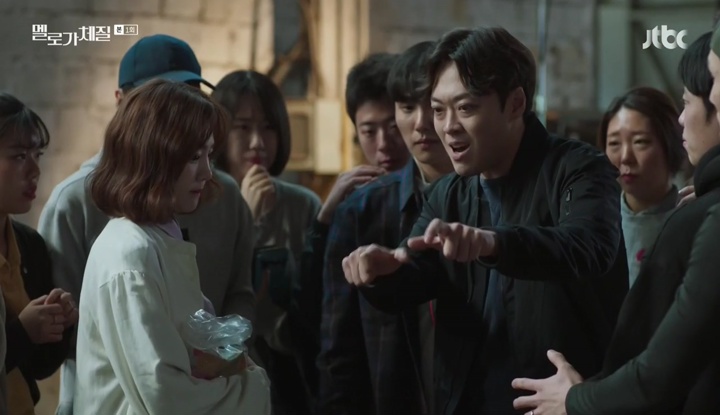 Tags: Be Melodramatic, Class of Lies, Let Me Hear Your Song

omg this is great! i never noticed these before cos my brain is always at a 0, but thanks for these posts. hm capitalism...i didn't know LG had tea? unless this isn't the LG i'm thinking of...but..

i always found those waters they used to use on tvn all the time really interesting. i was just really confused about it lmao.

poor han ji eun...if i was working with her i'd abhor her too tbh but i love when they make fun and point fingers at themselves because really it's a ridiculous ask that gets in the way of art but we all need funding right

That final scene in Class of Lies had me cringing like anything... until I realised it was a totally tongue-in-cheek spot of meta PPL. Also I'd totally watch the Adventures of the Gentle Giant and his Tea-Guzzling Sidekick as they mete out justice across Hell Joseon. I'd watch the hell out of the show, whether it was selling me tea or not.

I loved the Jellypo PPL from Be Melodramatic. LOVED IT! It was brilliant, funny, and so meta (this is also a description of the show itself lol).

I see characters in dramas drinking a LOT more scotch these days.

The massage chair and bottled water that followed were brilliant:
"How are we going to use this PPL?"
"We just did it."
Boom.

The best PPL in recent history...All of Be Melodramatic PPL metas were very good.
People should watch that drama....

Also the "Why do we always eating in this restaurant when you have an apartment?" fdsjsfdjf i love the way they can effortlessly and casually put PPL in their scenes.

That was gold. Also the"i told you i have no idea" after that. Be Melo had the best meta PPLs that were funny rather than cringey.

Stirrups? I had to re-read that because the first thing I thought of was a pelvic exam table ... Bwah!

If we are strictly speaking of the PPL that we see in Kdramas and Kvariety, then I got nothin', because I have not approached a Kdrama (in terms of actually sitting down and watching one---but I still do follow the recaps on here) in months #Kdramaslump.
If we are speaking in general terms from all across the board of East Asian dramas and variety shows in general, then for me, the PPL that I've noticed the most is for cooking oil, yogurt drinks made for our poor tummies that cannot process regular dairy, and an app that teaches English-- all of which is thanks to watching C-variety show "Chinese Restaurant" season 3 since mid-July 😅😅😅😅

@kudoran knows what I mean ;)

Aren't you watching Little Forest? I wonder if they're more subtle with the PPL, like snack drinks and toys, etc.

Oh yes, I am haha 😅😅
I honestly have not seen any explicit PPL from this one, if any 🤔🤔

Thanks for that brief on yerba mate :D. This is the first time I hear about it.

I hadn't read this series before but it is just my cup of PPL tea (hehe)! I'm always on the lookout for PPL and how they're using it in dramas and keep wondering if I'm one of the few people to do this. Thanks for the company @missvictrix!

"Either way, I learned this: you don’t know how much you love the mix coffee PPL till it’s gone." Yes!! I was just thinking about this the other day. I haven't seen a mix coffee PPL since Touch Your Heart!

Like the others mentioned, really enjoyed the meta PPL stuff in Be Melodramatic. It was one of the highlights of the show for me (among the other many great things.)

What I do wonder is - how do Sageuks make up that extra money since they can't use modern PPL? Have we seen any PPL in Sageuks before? :?

Didn't watch any in Goryeo or Joseon era sageuks except for Mr Sunshine. Lol they were pretty creative with PPL. They named a coffee shop after a brand.

I don't know but I believe they had coffee PPL in Game of Thrones...

Hahaha yes :D It was accidental PPL but Starbucks' profits rose up by a LOT because of it o_o

This isn't beverage related, but I'm totally buying a Maserati after watching Search:WWW. At least a toy one.....

Oh yes the maseratis.... Must buy a toy one even if its just for the sake of smashing it... Ah good times.

Well I watched Web dramas & I saw ppl of drinks - the yogurt ones, & then online teaching service ones.
I think Oh Je's family's resturant in Moments at 18 is a ppl too, not totally sure tho.
Love Alarm had some water or drink ppl too not sure.
In other news I was watching Cdramas & untamed had such realistic inserts of ramen & olay, they almost got me! 😁 😂

It hasn't been that long since mixed coffee PPL. Touch Your heart had them...
One spring night had a detox or hangover drink PPL.
Didn't IU in HDL buy a lot of stuff? I reckon at least one of those would be PPL. If not some cosmetics?

In Class of Lies, everyone from disgraced attorneys, to goody-two-shoes teachers, to Satan’s spawn students, spent their summer drinking a refreshing tea-like beverage.

The brand definitely doesn't discriminate, that' for sure :D

That bubbly water something bottle that they ALL drank from in Del Luna until the final ep.