Premiere Watch: The Lies Within, Leverage 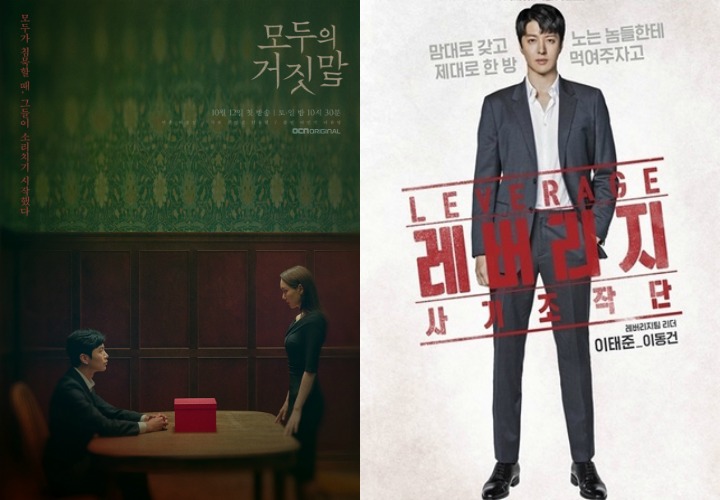 Secrets, lies, and scams are central to week’s new dramas. It’s a good week to be a fan of thrillers. 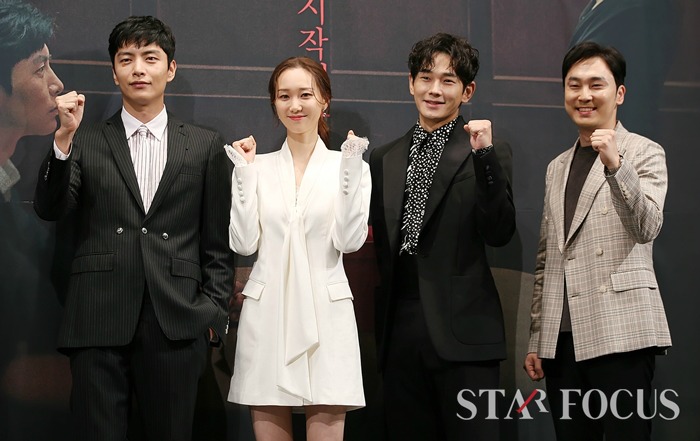 Reasons to watch: Lee Yoo-young has had a privileged, yet relatively grounded upbringing considering she’s lived her life in the spotlight. As the daughter of a popular politician, she’s used to attention but doesn’t crave it and has settled into a relatively happy life with her husband. One day, her world is turned upside down when her father dies in a car crash, and her husband suddenly disappears the same day. Stranger still, a message is delivered to her with the instruction to run for political office and win if she ever wants to see her husband again. On a search for the truth, she partners with small town cop Lee Min-ki. Lee was once a city cop, but he transferred to a small town to get some peace and quiet. But as the officer in charge of investigating the death of Lee Yoo-young’s father, it seems a quiet life won’t be possible as he finds clear signs that the “accident” was no accident. 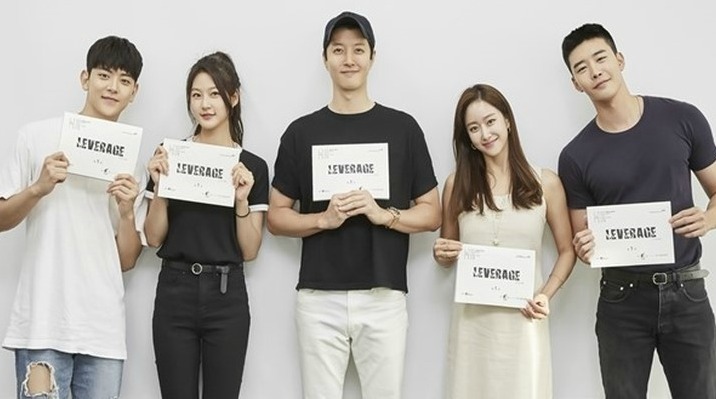 Reasons to watch: A remake of an American TV show by the same name, Leverage centers around Lee Dong-gun, a one-time insurance fraud investigator. After working for years to catch the “bad guys,” he has a revelation that causes him to turn in his resignation letter. Lee hasn’t gone into early retirement however, he has a new calling–finding the real bad guys. To achieve his aim, he puts together a team of the best thieves and scam artists around. It turns out Lee Dong-gun has quite the knack for being a criminal mastermind and his crack team of fraudsters will include Jeon Hye-bin, Kim Sae-ron and Kim Kwon. If you like Robin Hood stories, you might enjoy this modern twist on a story where the bad guys get their due.

This weekend may be busy - have to at least check out Lee Yoo-young's first appearance after My Fellow Citizens; and Kim Sae-ron has been so good so many times I have to try anything she does.

I want to watch The Lies Within because it's a OCN thriller and they're so good to do it and I like the actors!

I will test Leverage too. The casting is good and I like the US version.

Leverage's plot seems quite like my cup of tea. Plus, recognize the two guys on the left & right as the enemies-turn-brothers from Marry Me Now, it'll be cute if they teamed up here. And when did Kim Sae-ron get to be so tall..?

I dropped Marry Me Now but it's nice to see them reunite so soon. Kim Sae Ron is growing so fast! Before Leverage, she acted in the webdrama Love Playlist season 4.

Their reluctant bromance was one of the highlight of the drama for me, hehe.
Watched Kim Sae-ron quite a while back in Mirror of The Witch, she looked so grown up in Love Playlist's poster. Will it be ok to jump straight to season 4 or should I watch from the first?

You won't have every detail for past relationships but I don't think it will stop from enjoying season 4 alone.

I will just continue watching every drama that Lee Yoo-young is in.

First of all, I've seen several VIP teaser, and Lee Sang-yoon's looking super handsome... (He and Jang Nara look so good together).

But, another character with an infidelity issue - like one in OTWTTA :(

Excited for leverage. I can never get sick of Vigilante caper dramas especially one with a great cast

@inkcityxx
Have you ever wondered why KDrama has so many Vigilante dramas?

Jang Nara, Lee Sang Yoon, Lee Min Ki, Lee Dong-Gun
All these star actors! must I pick one?! Story-wise, THE LIES WITHIN sounds so much like MY FELLOW CITIZENS (the being forced to run part)
VIP, I don't particularly like to watch shows where the husband has an affair.... but its Jang Nara....!
Leverage, sounds interesting! Premise reminds me of Squad 38 and Bad Guys merge.
I'm gonna need more beanies reviews before I choose which ones to dive in!

Wait wait wait, Lee Dong-gun is starring in a show this week, and I knew NOTHING about it? Wow, I'm a fake fan.

This one flew under the radar for me too. I was too excited for LMK (@mindy keeps reminding me on the beanie wall).

You act like I’ve been keeping a countdown or something

I would be more surprised if you hadn't.

Why can't Jang Nara be happily married in a drama for once!?

I petition a happy romcom for SSR and Jang Nara. Hwangu and hwangjae reunite!!! Hahahaha 😆

Lmao that's exactly what I thought 😆

yep hahahah btw for any fans of the OG show, the black actor (dont remember his name...i know i should) is going to be in this new movie about the death penalty and apparently he did phenomenally!!!

Excited for VIP since I miss Jang Nara on my screen! But it says melo hhhhmmmm

Omo I see the Hyung from He is Psychometric. Dont die & heal my hurting heart please 😌

Um is it Saturday yet

Did SBS change its schedule? The official site for VIP still has the premiere date as Oct. 28.

After reading this: 'a message is delivered to her with the instruction to run for political office and win if she ever wants to see her husband again.'
I'm slightly concerned that my first thought was to pass it to the police and move on with her life....
Anyway looking forward to checking this out :)

it's not concerning ur RIGHT!!!! phahahha

Will check out The Lies Within.

Not crazy about the politics part of The Lies Within, but I knew I was going to watch it anyway because: A. Lee Min Ki and B. OCN Crime Thriller. XD

Want to watch Jang Nara’s VIP later this month too… October has so many interesting dramas.

Those are my exact thoughts on The Lies Within.

All I can say is the wifi in my Airbnb this weekend better be good. However, I have no expectations. None. If I anticipate a drama it turns out to be dreadful, so these will likely be bad. Doesn't matter. I don't care. I haven't been waiting for Lee Min-ki to do anything. Nope.

I'm sorry I'm using you as an emotional barometer. Let me know on a scale of Beauty Inside to BTLIOF where you eventually fall.

HOW ABOUT YOU JOIN US ON SATURDAY OCTOBER 12TH AT 3:30PM US CENTRAL TIME ON DISCORD TO WATCH IT provided subs are available at that time

Alsooo that is a good idea since I'll be doing INAR afterwards and it means I won't forget and also I can maybe transition you all to INAR.

@leetennant Then we will experience the suckage together. As is good and proper.

I already saved you from Traumatic Brain Injury. I’ve done my duty.

@mindy So much for my "no post-chuseok shows" vow... oh well, we can bond over shared trauma. Or perhaps not! Maybe it'll be awesome and we can fangirl instead.

Lies Within. Lee Min Ki in a serious role 110% yes.
Leverage. Ooh, I like these caper dramas. If done well, it could be very watchable.

uhhhhhh who is that guy far right in the second pic? asking 4 a friend...where have i seen him

didn't know the remake of leverage was happening. both sound ok, i'll give them a shot (maybe)

Kim Kwon, he acted the hyung in He Is Psychometric.

he was in voice, witch's court, and grapevine! never watched psychometric. that's how i know his beautiful face.. :P

Want to watch Leverage, but it's not on Netflix or Viki. Any info?

I was thinking the same thing. I tried to request on Viki but it says "this form is no longer available". Just what does that mean, or imply?

leverage was my favorite show cant wait to see what they do with it!!

Why so many comments about Jang Nara and VIP? I thought that show was postponed until October 28.

This post originally included VIP as a mistake. I assume it was edited to correct it.

The first version of the post included info for VIP. It's been removed after VIP pushed back its premiere. :)

I loved the US version of Leverage. I didn't even know about this drama until last week and I am super thrilled! Hopefully it will be as much fun as the original.

i wonder if LDG would be an alcoholic in this?

He looks very clean-cut in the posters so we'll have to see.

Nate was a pretty clean cut guy when he wasn't spiraling, but I kind of doubt the show will go with the whole "functional alcoholic" part of the mastermind's character. I think they may have also cut out his son's death, which would was the trigger for Nate's alcoholism to begin with so... *shrugs*

god i totally forgot about that :(

Not only did I love the US version of Leverage but it's one of the few shows I feel will be well suited to a kdrama adaptation. A lot of the underlying themes about social justice, vigilantism and lives destroyed by a brutal privatised health care system translate perfectly to a Korean context.

Re LEVERAGE. Availability angst. In early 2018 TV Chosun gave us the fine sageuk GRAND PRINCE which was available subbed on Viki.
It would be very nice if Viki licensed LEVERAGE. I just put in a request at Viki. It seems the Viki request form has changed. You can put in a request to Viki here:
https://support.viki.com/hc/en-us/articles/360034633713-Request-a-TV-Show-or-Movie

I'm a huge Leverage (US) fan. I own all five seasons and watch them repeatedly. For that reason alone, I have been planning on checking out Leverage the kdrama. The trailers only made me more excited, can't wait to check them out.

28 YY Chats with Toast Between Bites

Lying, cheating husbands should be castrated, and their you-know-whats fed to the neighbourhood cats. I love reading books where the wife of the lying cheating scum of a husband gets her revenge. I read this book where that no-good lying cheat is forgiven by the nice wife, and reconciles with him, AFTER cheating on her for one year, and telling her she's boring to her face, and his girlfriend is tonnes hotter and understands him so well. I was so mad at the ending I wanted to strangle the writer. RL is a different ball game, you've got finances, kids to think about, but in an unreal world, at least let that scum get what he deserves!

Where can we watch Leverage?