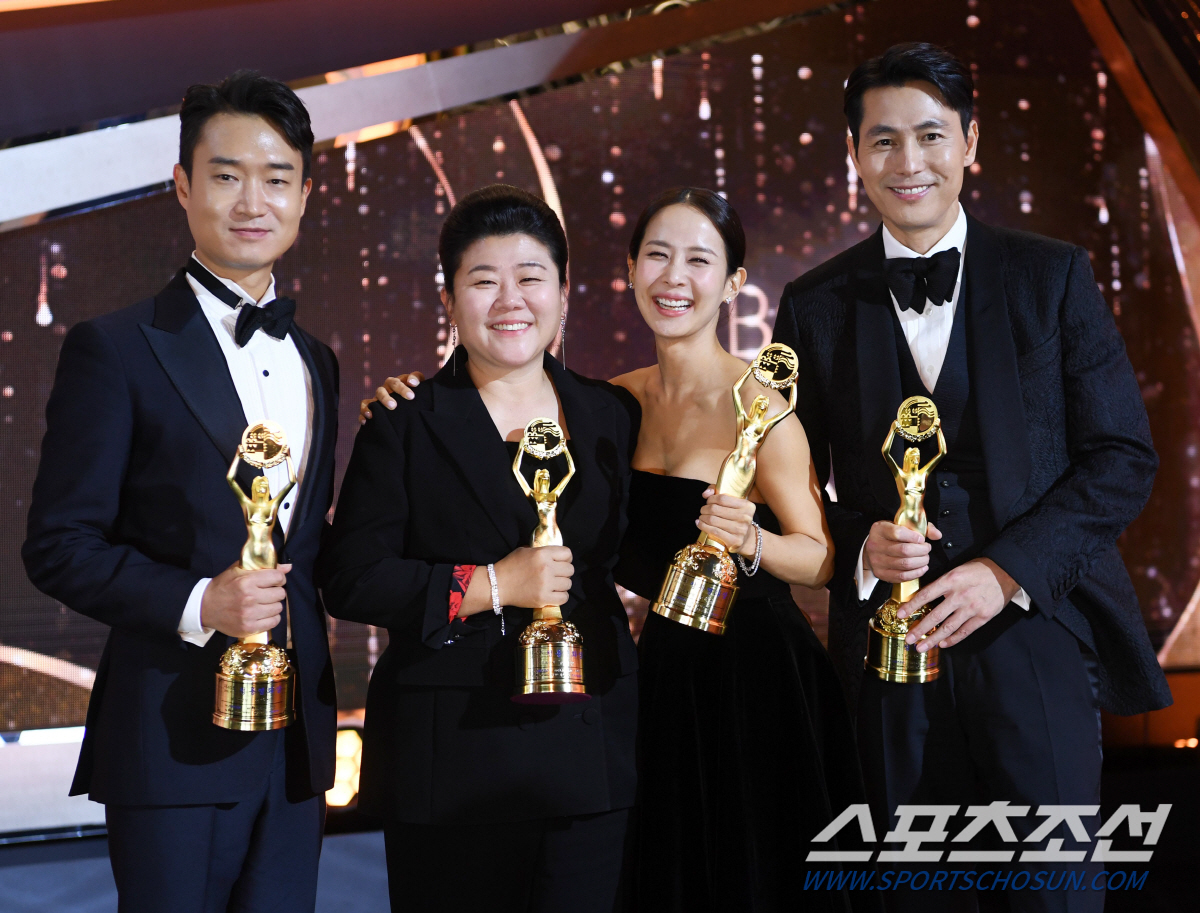 Awards season has officially begun, with the 40th Blue Dragon Awards taking place in Seoul on November 21. Last year’s MC duo Kim Hye-soo and Yoo Yeon-seok returned to host for a third year in a row.

Surprising no one, Bong Joon-ho’s Parasite was the big winner of the night, sweeping up five awards across the board. For the most part, no one film managed to carry off many awards though Swing Kids, a period piece set during the Korean War, picked up two awards in technical categories, as did the Jo Jung-seok-Yoon-ah comedy EXIT.

The dark comedy-thriller Parasite has been getting rave reviews internationally and domestically, and it seemed like such a clear favorite that it’s not shocking to see that it picked up wins in the biggest categories of the night. The film won Best Picture, Best Director, and Art Direction. Its other two wins were for acting, as Jo Yeo-jung’s portrayal of a wealthy matriarch won Best Actress and Lee Jung-eun beat out a strong field of competitors (including her costar Park So-dam) to nab Best Supporting Actress for her portrayal of a mysterious housekeeper. 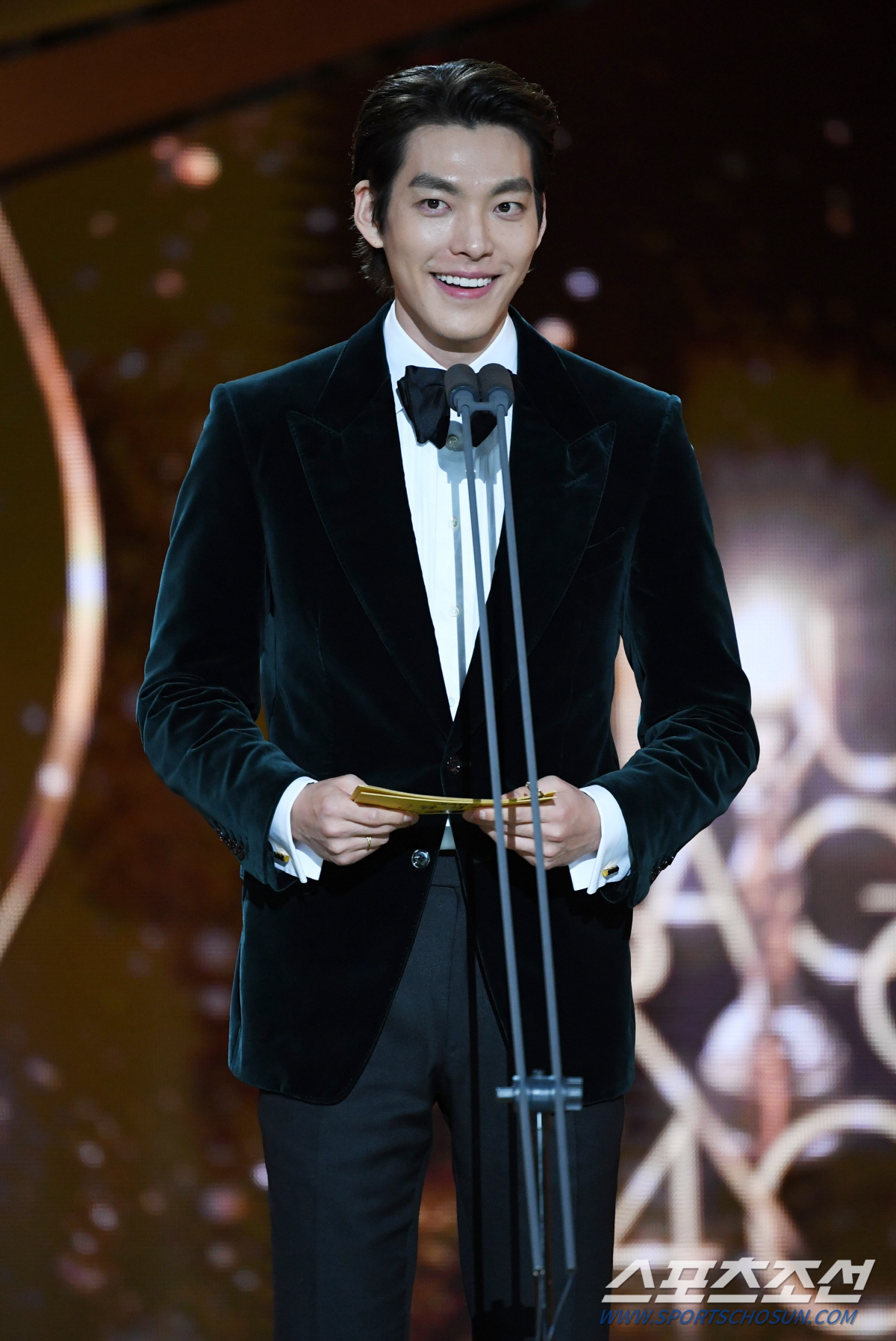 Jung Woo-sung won Best Actor for his turn as a morally conflicted lawyer in Innocent Witness and Jo Woo-jin scooped Best Supporting Actor for his role in Default, which is set during the 1997 Asian Financial Crisis.

In the New Actress and Actor category, the winners were Kim Hye-joon and Park Hae-soo respectively. I haven’t seen her winning work, but she turned in a strong performance as the young queen in Netflix’s zombie sageuk Kingdom, so I’m looking forward to seeing her in Another Child. Park Hae-soo won for his role in the gritty crime film By Quantum Physics: A Nightlife Venture. It’s an interesting choice as previous winners tended to skew a bit younger, but the nominations in the category were a bit odd as they included actors I wouldn’t consider “new” like Gong Myung, Park Hyung-shik, and Jung Hae-in as well as rookie Kim Sung-chul.

I was very pleasantly surprised by one of the presenters–Kim Woo-bin! Looking happy and healthy, this is his first public appearance since he announced in 2017 that he’d been diagnosed with cancer and would be halting all activities. For the full list of winners, see below. 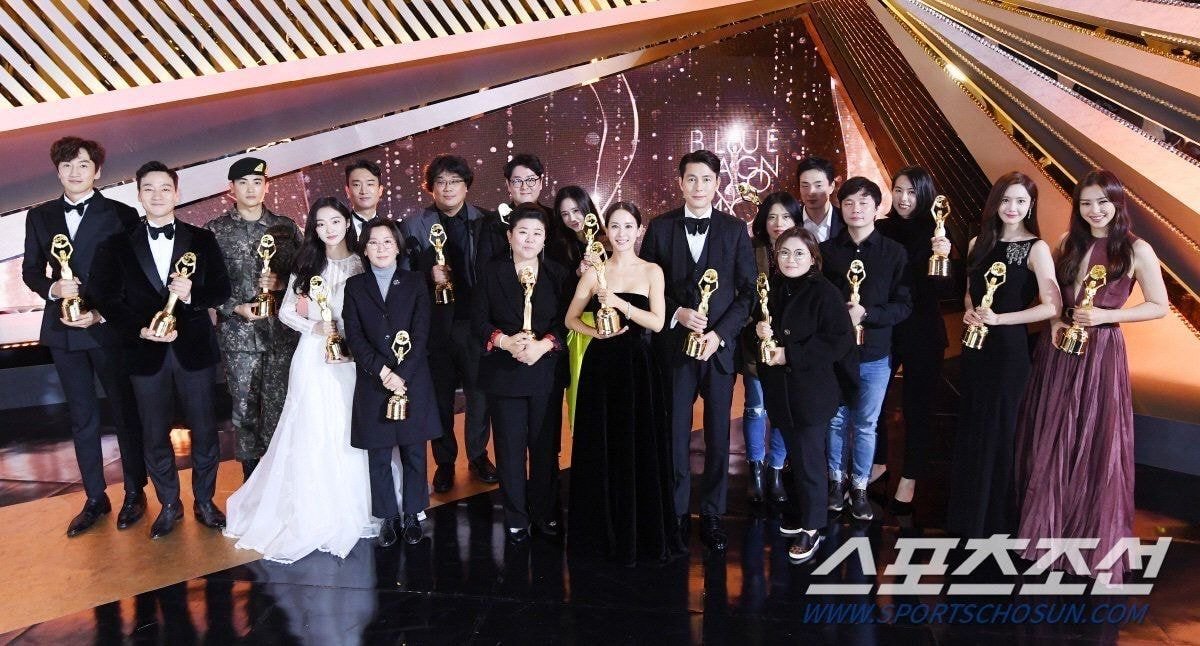 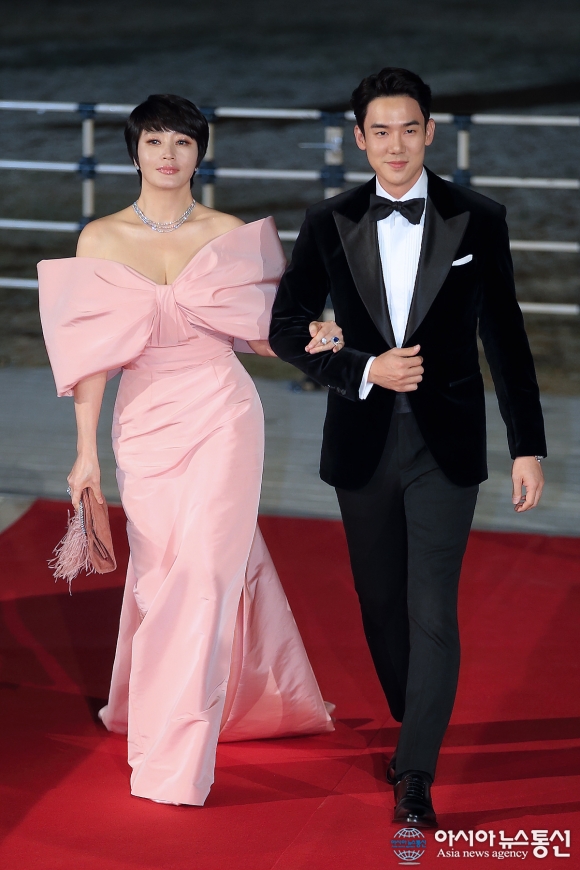 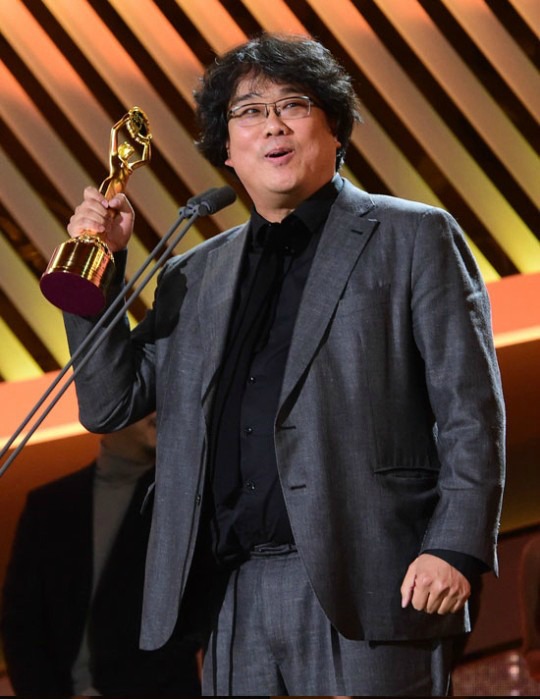 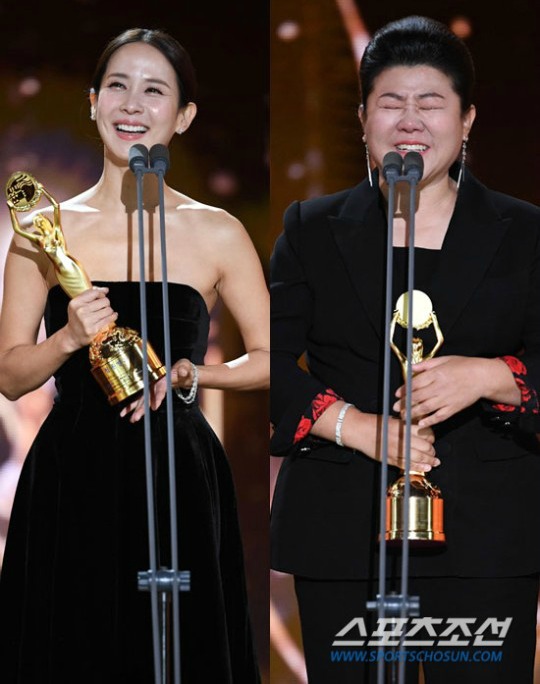 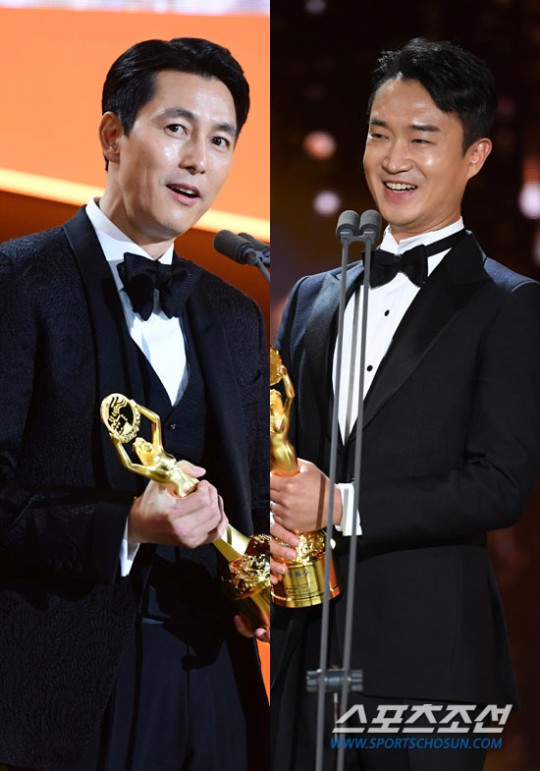 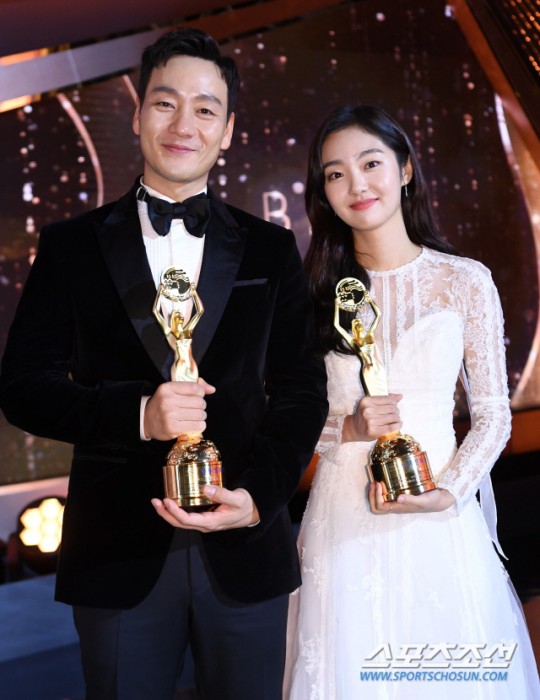 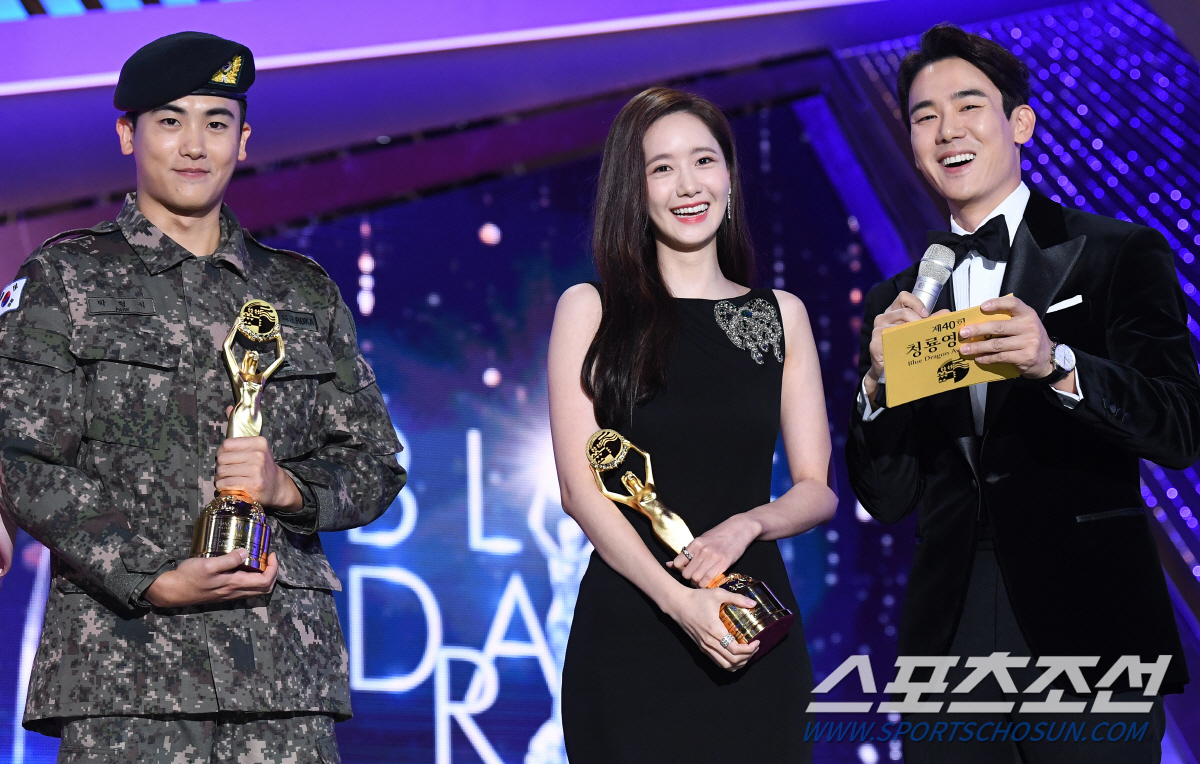 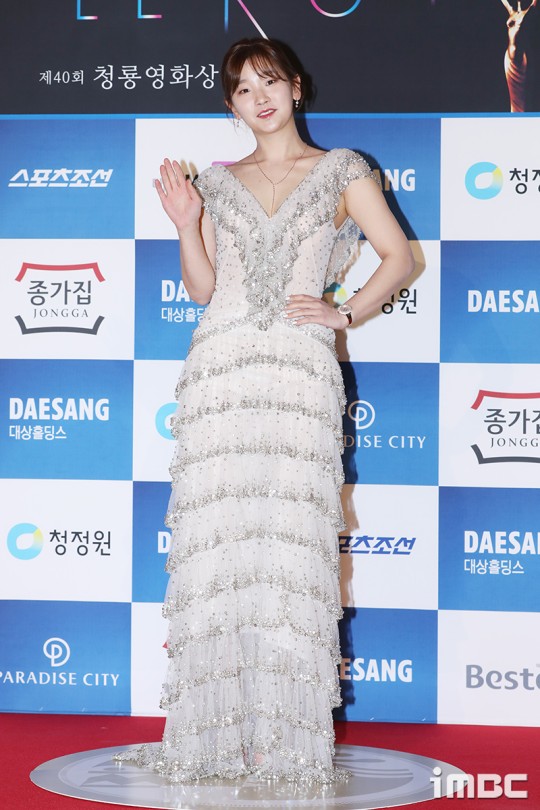 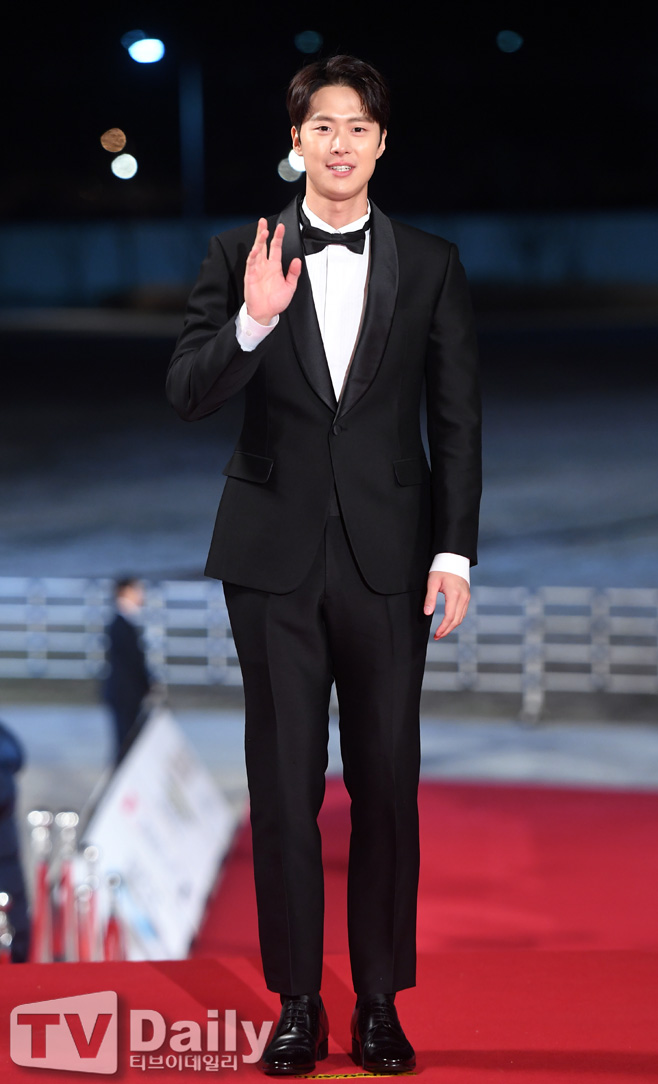 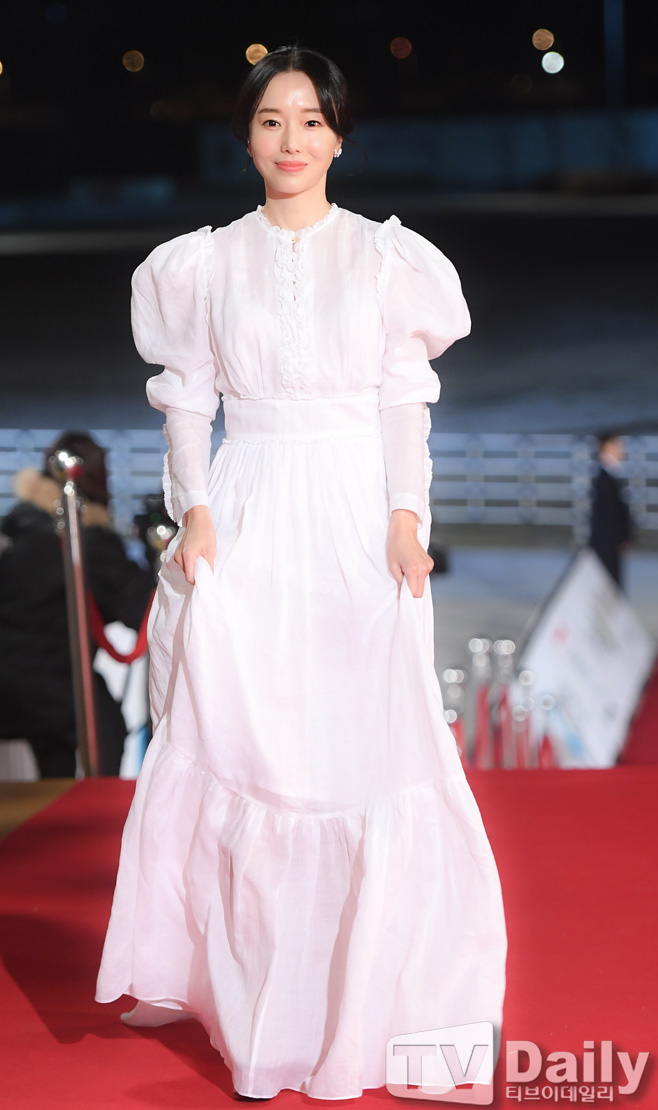 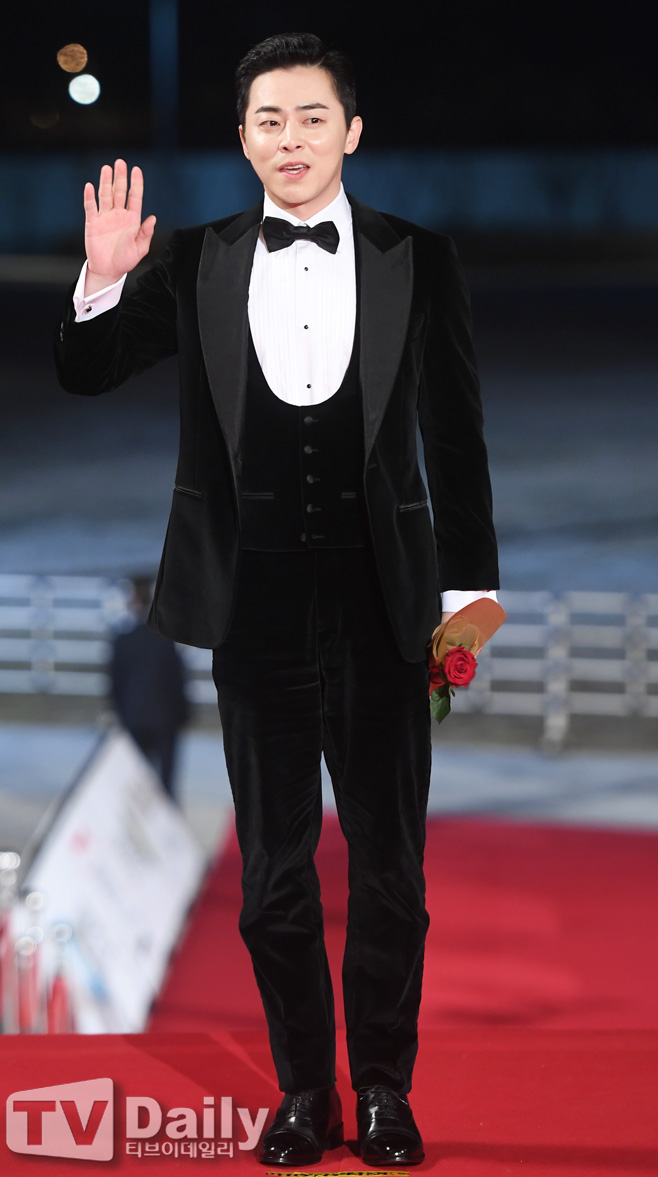 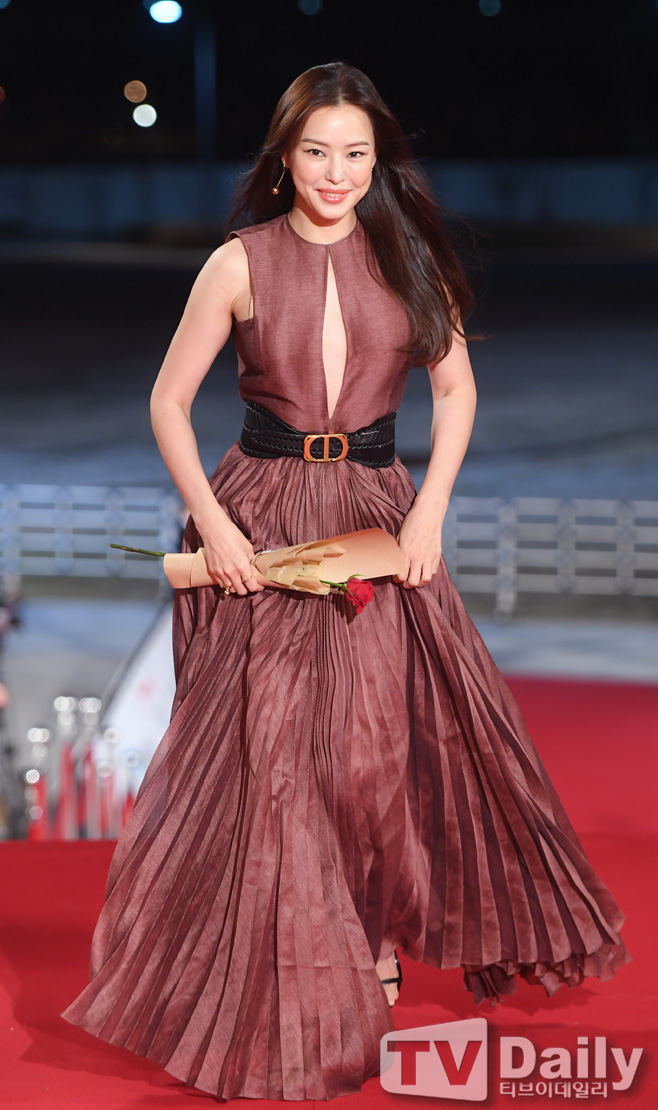 Award ceremonies are ridiculous, but Swing Kids, Innocent Witness and Exit all won at least one award, so I'm happy with that.

Swing Kids should have been nomiinated and won in other categories. It was a good movie.

It's one of my favourite movies now - I definitely think it deserved a music or an art award, but I'm happy with editing. That film was technical perfection~

I wonder when the SK entertainment finally warm up to idea of evening event's make up and fashion, sigh.

I didn't even noticed, but you right Korean actresses rarely wear jewelry to functions.

I used to design jewelry so it really jumps out at me.

It's kinda like ?? I mean I'm not asking for couture but I feel like their street style is more interesting/cooler than their red carpet wear. Ahem, I see a lot of really cool/innovative fashion from regular Korean people than I do with their celebs for the most part.

Eyebrows is back looking healthy and well! ♥

And yay for Lee Jung-eun! Her acceptance speech was so T___T. I’m so happy for her. And everyone, too. Except the stylists who insist on plain ol’ white dresses. Boo!

Kim Woobin! Nice to see him well and looking healthy!
Also nice to some splash of color besides the usual black and white (seriously).
Congrats to all the winners!

SO glad to see the ladies from PARASITE get an award!

This year's k-films was so so. Thanks to PARASITE for making it a historical year for Korean cinema.

Blockbuster wise, it may be so so, but quality wise, there are more films this year that stood out compared last year. House of Hummingbird, Another Child, House of Us, even Juror 8 are good pieces. Sad thing is they were not given the same attention as Parasite (which is a masterpiece).
Also, female directors/ screenwriters are slowly rising/ bejng recognized so it is a win for me this year in Chungmuro.

I didn't watch as many films this year unlike 2016.

I love Bora's HOUSE OF HUMMINGBIRD and I think it got a lot of attention overseas (film festivals) like most Indie films.
I haven't seen ANOTHER CHILD from Kim Yoon-seok but it's on my watch list. I'm curious to see how he's doing as a first time director and writer.
Thanks for mentioning it.

I personally love House of Hummingbird, and while it was given recognition abroad, sadly it did not generate blockbuster success in Korea. But of course, it is a celebration when female talents are slowly on the rise and given recognition.
Another child and House of us are heartwarming movies about family. They should be included in the BEST Picture nomination. Kim Yoon Seok did well in his debut and Yoon Ga Eun showed she is a superb writer and director. Juror8 is a good comedy and has good directing. I personally like it than Extreme Job. The ensemble is good and Park Hyungsik deserves the nomination for best new actor.

I wonder if Ha Jung-woo is going to direct another movie any time soon. I hope he'll keep at it even though he said it's way more challenging than acting.

Thanks for recommending JUROR 8. It wasn't on my radar but I'll look for it.

I didn't even know that THE HOUSE OF US was her 2019 movie because of the title. I thought it was a translation mixed up.
Now I have 3 movies to watch.

Kim Ji young and moonlit Winter too are outstanding, but will be included in next year’s BDA. A lot of good movies this year actually and I feel I am spoiled this year.

And yay for the wins of the ladies of Parasite! Looks like the Parasite team has a pretty good chance of being recognized at the Oscars. Win or no win it would be nice to see Asian cast members in the red carpet photos.

yes! so happy to see Kim Woo Bin so happy and healthy!

New Director : Lee Sang Geun !!!! EXIT he so good, hope next u have big project .

Honey Lee's strategically placed at the bottom so we could go all; "Ahhhhhhhhhhh!!!!! Finally at least one lady knows her fashion!😍😍😍😍".

I guess I'm in the minority. Hated the dress- no to the belt. Then again I so dislike Maria Grazia's dior.

Yup, the belt has to go.
But I really liked the color, fitting and the skirt.

I loved the color and fabric of her dress, the simple bodice and delicate neckline. I wanted to reach out and touch the fabric of her dress, it wasn't the standard satin or sequin shiny. I'm an unrepentant fabricoholic, so am usually more interested in the dresses than in the awards.

Quite frankly, the highlight of the awards was lee young ae's appearance looking like a goddess.

So happy for him! I'm always so glad to see him in a new drama.

I'm surprised that Park Hyung Sik was allowed to attend the ceremony. Hope his career will continue smoothly after he discharges.

Maybe he doesn’t want to miss out his first time attending the Blue Dragon? He is the only legit new actor nominee, as it is his first movie. Afaik, those who are serving in the military can attend public events if with permission (they will use their vacation leave) and should wear their military uniform.

if not mistaken, i read he was on leave & that's why he could attend it.

Now beloved KES, goblin's script writer.. needs to write her next drama and cast KWB as the lead..

actually me very curious to see KWB and goblin's lead actress chemistry.. or with kim taeri..

actually KWB and kim taeri would be scorching hot together

Year of The Parasite!

Why is that lady wearing her grandmother's nightgown from the 19th century?

**Fingers Crossed** PARASITE wins Best Picture at the Academy Awards here in the U.S. Now that would be something!!

I really liked Honey Lee's dress. The color, the style, not cookie cutter, but she took a risk and I think succeeded. (Obviously not everyone liked it--but fashion is subjective.)

22 parkchuna is still an Errant 🫘

I LOVED Kim Hye Soo's and Honey Lee's dresses. Lovely colors and lovely cuts. Both of these ladies know how to carry themselves magestically and sweetly at the same time.
And of course, Lee Young Ae who isn't featured here.

Happy for everyone ! Would be nice to see Won Bin attending next year *finger cross*