[Movie Review] Despite its nationalism, Ode to My Father captures the pain of a generation 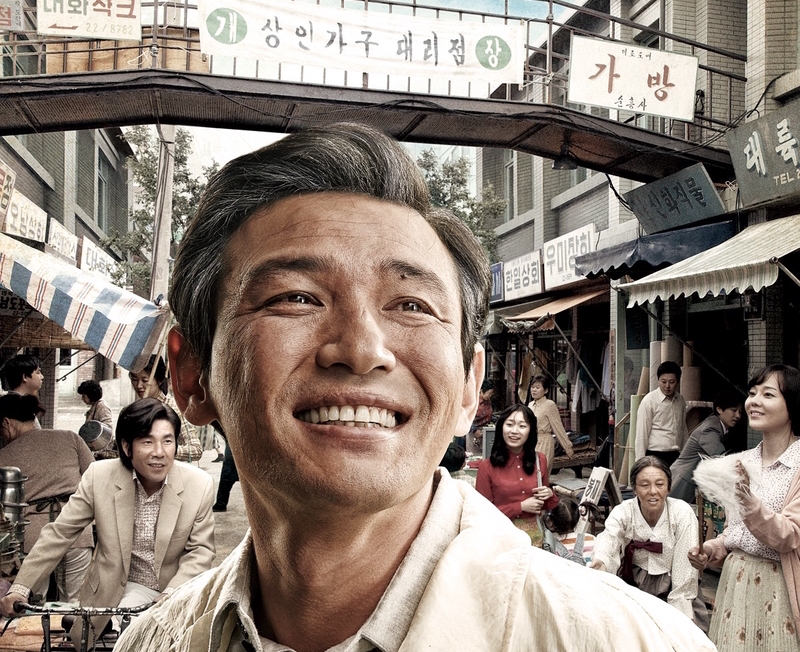 Ode to My Father (literal Korean title Gukje [International] Market) is a sweeping epic that starts at the Hungnam Evacuation during the Korean War, and spans the life of its main character, Duk-soo. He starts as a young boy who feels responsible for his family being torn in two, and he is weighed down by that burden his entire life, in an obvious but fitting symbol for the Korean peninsula itself, torn in two with family members on each side.

The film is well-made and entertaining, moving smoothly from the present to the past and back again. Lead actors Hwang Jung-min and Kim Yun-jin do a wonderful job in their roles as Duk-soo and Yeong-ja. In a Forrest-Gump-esque series of coincidences, Duk-soo participates in iconic historic moments of the last seventy years, crossing paths with famous figures well before they made it big, such as the founder of Hyundai and the singer Nam Jin.

All of this makes for a very engaging watch, balancing pathos with humor, but the emotion is so very heavy handed, and at times the film can be overtly nationalistic and somewhat jarringly politically uncritical. For example, when Duk-soo and Young-ja are arguing they suddenly stop and salute the national anthem; Duk-soo manages to pass his interview to work in West Germany solely due to strong patriotism. American soldiers only appear as benevolent, or at least harmless, figures. 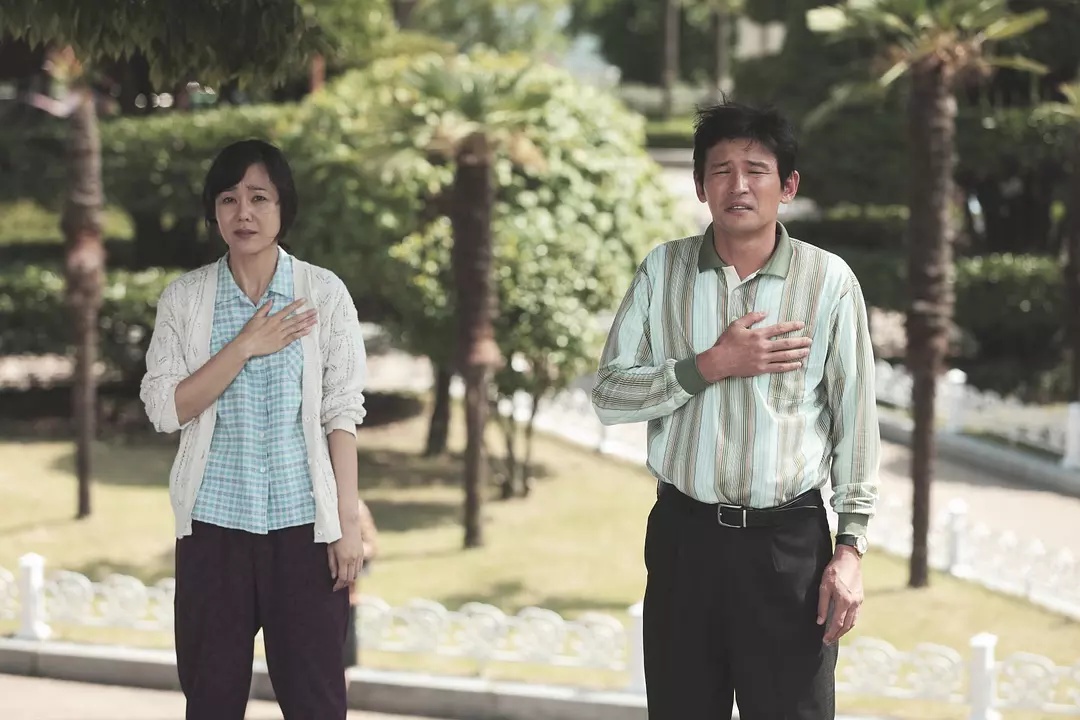 These are small details, but it was a choice to include them. Director Yoon Je-kyoon, in response to criticism that the film was right-wing, said that he “purposely took out political events that could be sensitive and create an uncomfortable atmosphere.” I normally wouldn’t mention an interview in a review, but it relates to the fact that we’re given all these moments where people are saluting the flag and singing the national anthem, and yet viewers are to believe that the film is somehow apolitical. Not to mention that the film’s flashbacks skip entirely over the democratization movement in the 1980s—it doesn’t escape me that the only times either Korean or American soldiers are shown, it’s when the hero (and the audience) is entirely in sympathy with them.

I think what bothered me most was the contrast between two scenes. In one, Duk-soo’s mother tells him not to blame himself for losing his sister Mak-soon. As their mother, she has to stay alive for the sake of the rest of her children even if that means leaving her other child to die. But in West Germany, Young-ja pleads to be allowed to go back into the mines to rescue Duk-soo and his best friend, even if that means all the Korean miners might die in a gas explosion. You could see it as a gesture of love and friendship, except that it’s framed as a patriotic act: even if they die, they must die in the arms of their countrymen, in this cold foreign land. Uncomfortably, this seems to place nationalism over parental love, as though the love for country is somehow nobler and more powerful than a mother’s love for her children.

Still, I found one particular episode incredibly powerful. Duk-soo goes to Seoul in 1983 to try to find his father and sister, surrounded by crowds of people searching desperately for loved ones lost to them during the war. They come to different cities around the country and ask each other on live TV for details about their families and lives together, confirming whether or not they’ve found the family members that have been missing for so long. That scene alone made the movie worth watching.

I feel the rest of the film would have been even more moving if the director had a lighter touch with the music, slow motion, and patriotic motifs. At its core, this is real pain that is still felt by living people; it needs no added melodrama to move an already sympathetic audience. And yet, there is an element of catharsis, and since Director Yoon has also said that this movie is quite literally an ode to his father’s sacrifices—he even gave the lead couple his parents’ names—perhaps that is the best spirit to watch the movie in. It’s a nostalgic and idealized look back at difficult times gone by and sacrifices made by those who are no longer with us, but it also has quiet moments of poignancy and humor that remind us that often pain and joy coexist. And we continue to live on, carrying both with us. 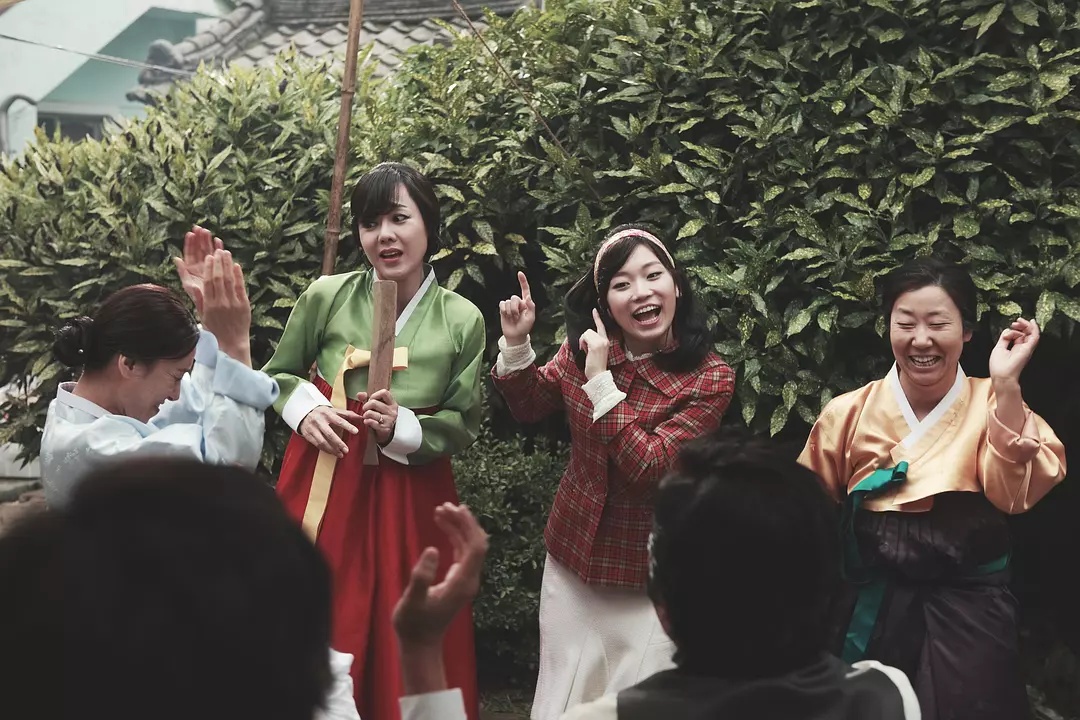 Thanks for the review, this looks like an interesting movie to watch, even if it just tells some parts of the history! There would be other movies which tell the other side of history as well!

I remember crying buckets of tears during this film. A Korean film that I was able to watch with my whole family.
Hwang Jung-min is one incredible actor. He is believable at any age and had wonderful chemistry with Oh and his leading lady.

That was a goof on my part - I had completely forgotten about his review! 😅

(I definitely cried a lot too. Hwang Jung-min really is amazing.)

Aw, thank you! I've meant to write more, but grad school is a beast. Just a few months to go!

Always nice to see another perspective on the same movie nonetheless!

Always in good company with you, my friend!

I also cried a lot of tears while watching this movie, and I loved it. It was sort of the essence of why I watch Korean content, because it makes me feel so much.

this is a pretty common problem with media. and the more that i watch of korean media, the more it can be recognized. while i'm empathetic to the story, i'm not sure if 'despite' is, imo, something that would hinder it from capturing pain. it would capture the life, and it's hard to swallow and watch, but there's also a responsibility to understand the context and not have this happen again. i find it extra jarring that the director would say that it's apolitical when it's literally a political backdrop.

but i object to the notion that it would be apolitical in any sense, particularly with this subject matter. it's probably something he is thinking of after the fact given the criticism. as an artist, a filmmaker, it's damn near impossible, and we all know it deep down, to make something removed from 'politics.' but the political is personal and history is politics and therefore personal.

i try to remove my thoughts of US intervention to other countries while stripping their agency but the reliance and leeway countries have given to us (via force or otherwise) is disheartening as an american. as well, taking and skewing what happened in vietnam because of the [perceived] perception of the US.

i think we're reticent to place movies as conservative or right-leaning. this film came out in 2014, think about the criticisms from then to now. i never got a chance to finish it, and i'm older and much different than i was but this is a pattern that's very much a turn-off to me in cinema. it's esp glaring when there's such a painful backdrop (occupation) that turns things into nationalist propaganda (the occupation leading to over-the-top platitudes about a nation.)

for me, now, this is such a roadblock in films. and it's ahistorical and i think irresponsible. very interesting review, thank you for sharing! also read the other review linked her which linked to more reviews that i read. it's fascinating to see how things have changed in a matter of 4-5 years tbh. not sure if i would even be writing this response were i in my early 20s reading something like this. but if anything this shows us just how amazing and imperative art is which is why i tend to demand more from artists

I also remember watching this movie on local cable channel few years ago. Wonderful movie and loved the acting all around. Forgotten mostly what I saw and maybe should rewatch it again to understand the recap written.

Some American soldiers were harmless or benevolent. I am an American citizen and I have a great love for the people and country of Korea. I am pleased that they have pride in their country and who they are. There is a difference between "jingoism" and nationalist pride.