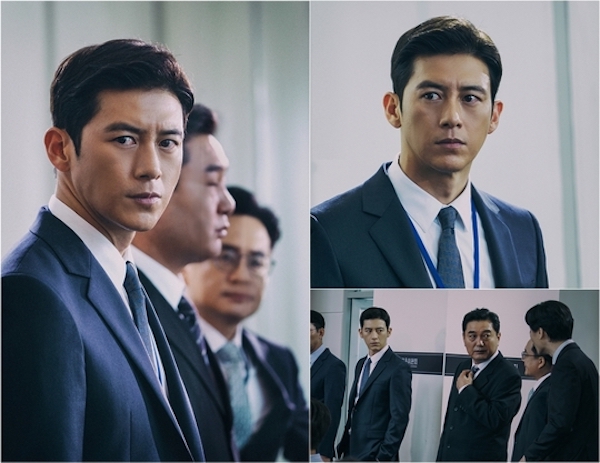 This man definitely ages like fine wine. The first still cuts of Go Soo (Heart Surgeons) in Money Game have been released. This drama promises to be a thrilling story with nation-toppling stakes about a financial scandal that threatens to cripple the economy. It will feature the people who fight intensely with every breath in their body to prevent this tragedy from occurring.

Go Soo plays the son of the most well-renowned economist in Korea. He hides his identity and steadily works as an economics bureau worker in order to be recognized for his own talents. Lee Sung-min (Entourage, Memory) plays Go Soo’s boss, the ambitious head of the economics bureau who is disillusioned with the country’s financial infrastructure. Shim Eun-kyung (Blue Hour, The Princess and the Matchmaker) plays the newbie worker who represents the ideals and convictions of the younger millennial generation.

Regarding the drama and his character, Go Soo said the following: “The content of the drama is really good, and filming is gets more fun everyday. So, I’ve been thinking about how to make my scenes more interesting and meaningful as I film…I’ve been trying to make my character Chae Yi-heon feel not like a fictional character, but like someone who we could easily have met in real life. I will try my best to show Chae Yi-heon as a principled bureaucrat with a strong sense of patriotism, responsibility, and having determined beliefs.”

Go Soo....yeah, I am feeling things with him.

Wow Shim Eun Kyung is coming back to dramaland! The plot sounds interesting.

But you know they gotta squeeze in the secret life of being from a wealthy family.

I mean, how many wealthy people are in S. Korea's dramaland. It is all of them? ;)

I just came to accept that Kdramas love their chaebol/wealthy and successful people.

I may be in the minority who is actually waiting for that plotline. Hidden identity to prove your worth? Sign me in haha Of course, the writing needs to be good like for any other work.

Lee Sung-min and Shim Eun-kyung <3.
I'm glad it's next year because I need a break from K-drama for a bit.

Good, good, good. Just what I need. Go Soo is great in stuff like this. Who could ever forget Empire of Gold? Looking kinda skinny there, isn't he?

Yoo Teo will return in this drama!!! I hope he doesn't get locked in a money vault and experience another kdrama death. Hua3

So that is his new drama! Please, don't kill him here.

Didn't know Shim Eun kyung was coming back to dramaland! I'm going to at least give this a try. And Go Soo! Lee sung min!

Go Soo, I still remember watching him in a movie where he plays firefighter. Whew, no wonder he was mentioned as female celebrity's ideal namja <3 <3

He looks so fine in suit, I'm not really into office drama but I might give this a try for the great casts, and Teo Yoo! I hope he's not dying in this one pleaseee