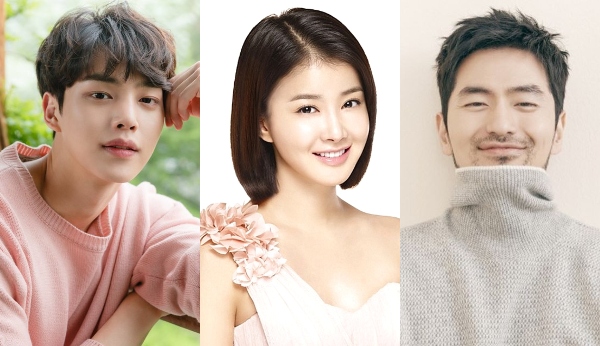 PD Lee Eung-bok, who directed hits like Mr. Sunshine, Descended From the Sun, and The Lonely Shining Goblin, will be returning with a new project for Netflix called Sweet Home. Based on a Naver webtoon by the same name, this drama will be about the psychological changes that occur when isolation turns people into monsters, and the desperate struggle they face against their inner demons.

Song Kang (Love Alarm) plays a loner high school kid who has just lost his family. He moves to a new, different apartment and begins to experience a number of shocking and bizarre events that prompt him to leave behind his hermit-like existence and jump back into the world in order to save people. Lee Shi-young (What’s Wrong Mr. Poong-sang) and Lee Jin-wook (Voice 3) have signed on to co-star as well. Lee Jin-wook plays a mysterious character who’s strong and tough; more details have yet to be released. Lee Shi-young will be taking on a character that was not in the original webtoon, but it promises to have a big role in the drama.

The rest of the cast seems to have been filled out and there’s a good combination of veterans and rising stars. Some of the actors joining the drama are Go Min-shi (Love Alarm), Kim Gab-soo (Chief of Staff 2), and Kim Sang-ho (Nokdu Flower).

Sweet Home will be released as a Netflix original series sometime in 2020.

I got excited for a hot second until noticed Lee Jin Wook name on it. Hard Pass.

It is your personal choice not watching his drama because of that news. But please be clear on the fact. It is not alleged rape any more. He was proven innocent. The girl tried to pull a fast one on him and failed. No, I am not a fan. I just think it is unfair to give partial information.

No one is proven innocent by court. He was found not guilty because there wasn't enough evidence in the eyes of the judge. I can have different take on this especially knowing SoKor laws on sexual assault and their definition of consent.

Another "Netflix original" – the part that is making me pause.

The bit of plot info does sound interesting though and I would like Lee Jin Wook to get a better drama than his previous one.

Oh, I've been waiting for more news on this. I was surprised to see it labeled as a psychological thriller seeing as the webtoon is horror, but maybe they're taking it in a different direction? I'm not sure how I feel about that...

right? Definitely a horror webtoon. And the description "a number of shocking and bizarre events that prompt him to jump back into the world and save people"? Definitely wonder if they're taking it in a new direction, don't want to spoil the webtoon but things get real pretty quick in the original. So good!!^^

Oh man, horror? *shudders*
I tried to look up the webtoon. It seems to be ongoing?

The plot also reminded me of OCN's Strangers from Hell a little.

Yes, it is ongoing.

Although the plot of the webtoon isn't anything like Strangers from Hell, I got the same vibe from the description, so maybe that's the direction they're taking it.

Quite curious as well with their direction as the source material is indeed horror...Now i kinda wanted OCN to produce Bastard,just to see Jin's Father teleport like no other dramaland character!

YES! Who would you cast as Scary Dad??

@frabbycrabsis loves KBS Drama Specials Hmmm,i don't have someone special right now but the ones who come to mind would be Kim Byung Chul or
Choi Won Young....Anyway i think someone who would blend easy i guess and not someone flashy,someone subtle(and fragile looking)...If it was a movie i would do a no name actor even...

NO WAY It's actually happening!! I've read the source webtoon on naver for a while, it's So. Good. I'm so excited, definitely tuning in.

As someone who is reading this horrifying, HORRIFYING webtoon, I do not get in the slightest how this will be adapted. There are some good names there too, but I don't have a clue who's playing who.

Tell you what, the pair that put Sweet Home together wrote Bastard first, and that webtoon is a masterpiece. I've been saying for years that it needs to be a drama!

I just connected that this is that webtoon! I have no idea how they will adapt it for TV!! Bastard would be way easier.

Precisely! And I also kind of think Bastard was better, because Sweet Home isn't quite as focused on building the characters...
Actually, that's not true, because the psychology of the characters is the most important part, but Bastard had LESS characters and they were all so rich! I feel like only Hyun is getting much development.

With good actors and good script Bastard would be a smash hit, imho. With that material and those actors I'm not so sure, but I wonder how they approach source material.

And made by OCN a must!

Right?? Are they just going to have a massive special effects budget? Because this could go south SO fast if not done well.

I don't know if you watched Hwayugi, but the CGI dragon at the end was NOT pretty. I don't have high hopes in that respect, but maybe they can twist the concept to make it easier on themselves?

Since it is with Netflix I have hopes with the CGI, Kingdom wasn't bad...

I'm not a fan of horror show and I think Kim Sang Ho was the weakest acto in Love Alarm and When the Devil Calls Your Name, so I can't see him as a lead.

It's sad because I wanted to see Go Min-Si in a new drama. She was so great in Secret Boutique! I don't know if I will watch Love Alarm 2 because I didn't like the first season and I'm afraid they will follow fans opinion instead of the webtoon, and anyway her character was not interesting...

If the cinematography is gonna be as beautiful as Mr Sunshine, then I’m all in ❤️

this reminds me of hollywood movie (if i was right) name quarantine in 2008..
i dont' actually like drama with more than 3 episode with this kind of genre.. but i starting to notice song kang.. so i think i'm gonna watch this drama.. plus this is from mr.sunshine (and other good drama) PD-nim... gonna watch it for sure!