Park Seo-joon runs through the colorful streets in Itaewon Class 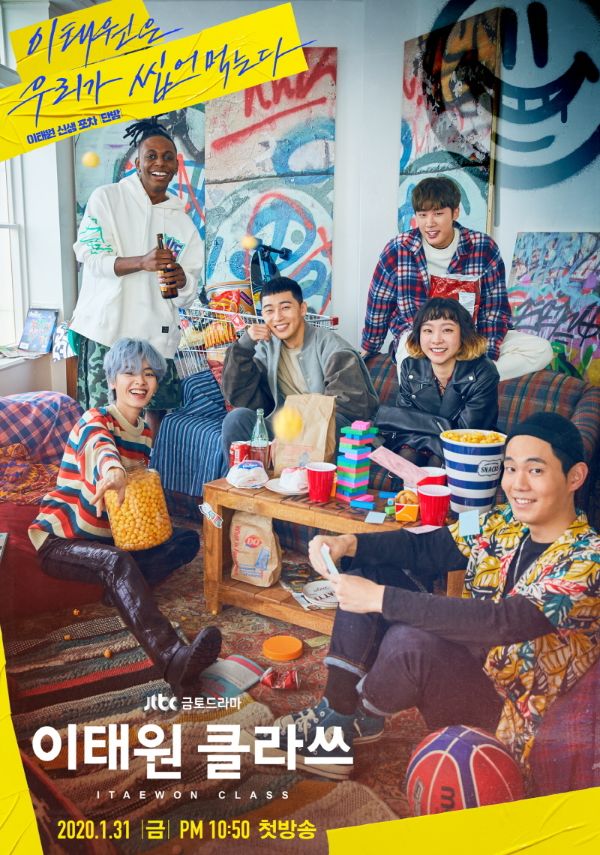 A new teaser clip and promotional posters have dropped for the upcoming JTBC drama Itaewon Class. Based on an original web comic by the same name, the story is about how stubbornness and individuality create a youthful revolution in an unjust world. Dreaming of freedom, several young people chase their dynamic and unique goals for success in this corner of Seoul, but there’s a mighty corporation that is aiming to stop them.

The drama is set in Itaewon, which is a neighborhood in Seoul that’s known for its expat communities. Park Seo-joon (What’s Wrong with Secretary Kim) stars as the direct and unstoppable Park Se-ro-yi who decides to come to Itaewon on one conviction: He wants to fight against a giant corporation in the food service industry called Jang Ga. Kwon Nara (Doctor Prisoner) will costar as Oh Soo-ah, a honest and confident woman who also happens to be Park Se-ro-yi’s first love. Kim Da-mi (Witch) completes the main trio as Jo Yi-seo, a highly intelligent sociopath who develops feelings for Park Seo-joon’s character. 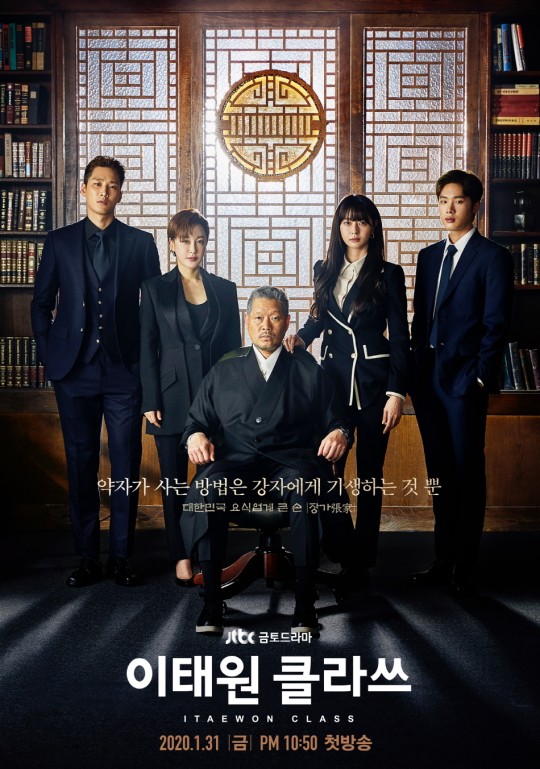 Yoo Jae-myung plays the CEO and patriarch of the Jang Ga family. Yoo Jae-myung and his family have history with Park Seo-joon’s family so their upcoming conflict is about much more than business. In the first promotional poster, we get a look at Park Seo-joon and his Itaewon friends. It’s a bright and colorful, with the tagline showing off a lot of youthful confidence, “We will chew through Itaewon.”

In the second promotional poster, we see Yoo Jae-myung flanked by his family, Ahn Bo-hyun (Her Private Life), Kim Hye-eun (Doctor John), Lee Joo-young (The Ghost Detective) and Kim Dong-hee (SKY Castle). The tagline on the poster gives us an ominous look at his world view, “The weak can only survive by living off of the strong.”

In the teaser video, Park Seo-joon runs with hot-blooded passion through the brightly lit streets of Itaewon at night with Kwon Nara (Doctor Prisoner) and Kim Da-mi (Witch) at his side.

The video begins with Kwon Nara narrating that Park Seo-joon shined too brightly for her as she runs next to him. Running on his other side, Kim Da-mi promises to make him a great man, unlike any others. Then the camera zooms to Park Seo-joon, who says that he doesn’t care what situations come his way, because he’s determined to achieve everything he wants to do. As the trio run, both women steal glances at Park. 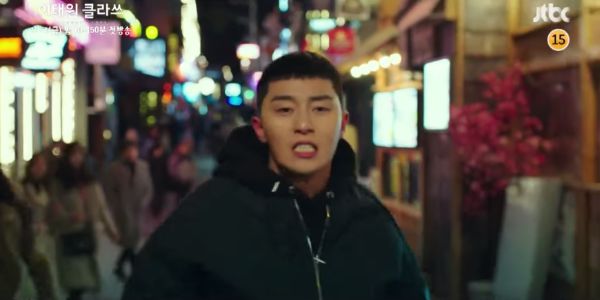 Wow, the promo posters look like they are for completely different dramas. Either way, I'm definitely tuning in for Park Seo-SWOON. I've really missed him.

I missed his eye smiles 😄

horrible haircut but still swoony. The promo reminds me of him being a dork in midnight runners with Kang Ha Neul.

oh definitely! i was so distracted by that hair, almost drove me mad as much as the plot.

Thanks goodness I dropped it after few terrible episodes, otherwiseI wouldn’t be able to keep my sanity.

haha i skipped A LOT and marathoned in two days

I actually got into Park Seo Joon in Hwarang even though the drama was mediocre at best and Park Seo Joon's hair was terrible in that one (made worse by the folks who changed it several times through the series, which was very distracting). His shoulders looked really good in that sageuk-wear.

Hooray, Park Seo Joon will be back!

I'm looking forward to this one. Hope it's good!

That sounds like description for BBC Sherlock and John 😉

OMG! Lee Joo Young is in this?! She's such a girl crush, and I really want to see her again in an enjoyable drama that I could actually finish.
Hoping this is it.

Usually, I find suits and formal/business wear for actors up their hotness, but for Park Seo Joon, it lowers it. Put Park Seo Joon in casualwear, and I'm drooling.

The man knows how to rock a tracksuit.

Yes!!!! He looks so good in casual wear!

This drama looks so stylish but also seems to have underlying warmth in its characters. Im also one to never miss out on a good squad and this one is definitely on different level that is piquing my interest. Also Park Seo Joon in casual clothes is just 😍

I just found out about this cast and wow everyone seems charming in their respective characters!

I just hope there won’t be too many English speaking scenes that makes me cringe every time.

I thought, that dramabeans have something against this drama or actors, because they didn’t even put news about script reading lol
Teasers so good. I have good feelings about this drama^__^

I thought dramabeans have something against this drama or actors, because they didn’t even put news about script reading lol
Teasers look so good, that I have same good feeling about the drama itself ^___^

This cast is everything, especially Park Seo-joon and Kim Da-mi. I’ve always been a huge fan of PSJ and the drama’s he chooses and KDM’s performance in The Witch blew me away. So glad to see her in dramaland and I’m looking foward to her future projects as well.

I’ve been excited for Itaewon Class for a while now and I can’t believe it’s finally going to air this month. Every character seems interesting and complex, I have a good feeling about this drama!

It looks like some good old-fashioned Makjang may be headed our way.

Am I the only one wondering about the black guy in the poster? What's his story

That works only in Hollywood lol Korea 98% contains only Koreans, they don’t need please any minority groups, to create “token diversity characters”, rather they trying to represent the fact, that Itaewon in Seoul contains a lot of different type of people and they all accepted here and youngsters here pretty progressive. I knew a lot of Western people would try to judge them for adding black guy because of their own perspective based on what’s happening in the West, but for country that don’t have diversity (or minimal one) even putting someone different on the poster means a lot. And all workers in Park Sae Roi’s bar have their own story.

I bet you he can speak Korean 😂

It would nearly impossible to have a life in Korea without speaking Korean but this is true for almost any country...

I have a life in Korea and am not fluent (though I am working toward it). I live very, very comfortably. It's possible to live here and thrive without speaking Korean.

You can if you don't have to read or talk to people who can not speak English. For example most of the food labels would be in Korean.

is it me or is kim dong-hee in both posters?

His character is the second son of the rich family, but because something happening he join Park seo joon restaurant :)

Kyaaaaaaaaaaaaaaaaa
Can I scream?
My Ryoo Kyung Soo in Itaewon Class? OMG! Discover him in confession, And I just watched that that for him, as soon as he less focus, I start to less caring with the drama, and I haven't finish it. AH AH AH AH... Sorry my fangirling heart. Hope he is become one of the main cast....

Omo, is that THE Yoo Jae-myung? I can hardly recognize him.

Wow I really like the colourful poster! Looking forward to Itaewon Class. I think Park Seo-joon looks really good in this haircut. :P

Yay, I’m not the only one, who thinks so^...^ Seriously I’m also into the fact, that his whole style not something mainstream in dramaland^..^

Why couldn't they have enough patience to allow his military hair grow a little???

Park Seo-joon finished his military service before he even debuted as an actor.

It’s not military hair lol PSJ entered military in 2008 and was discharged in 2010, then made his debut in 2011. For this role he specifically cut his hair to match character from the original webtoon.