Premiere Watch: Forest, Itaewon Class, Tell Me What You Saw 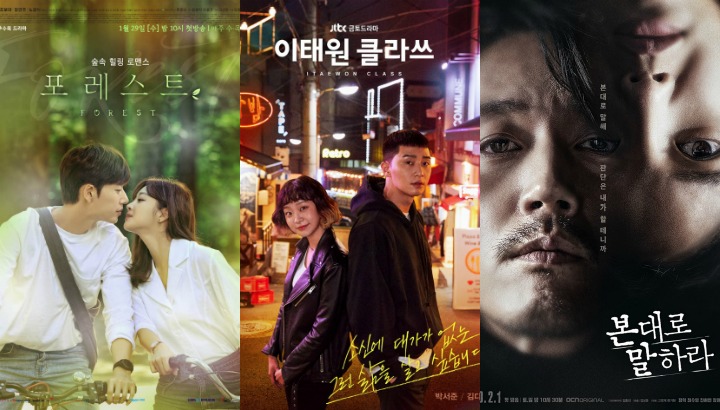 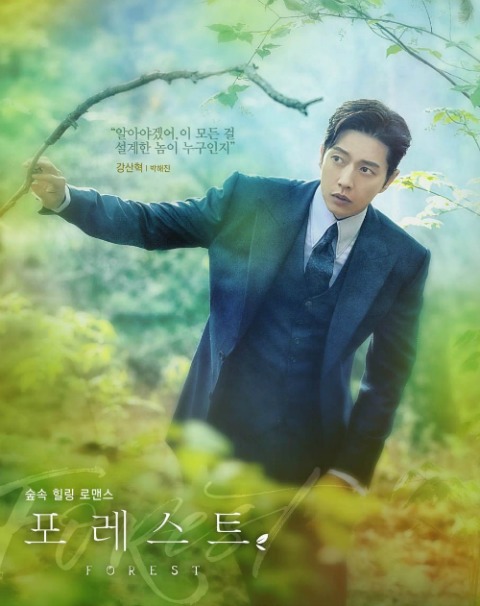 Reasons to watch: Secrets and romance are in the air in Forest, starring Park Hae-jin and Jo Boa. Park Hae-jin seems to have it all: wealth, good looks, and brains, but he’s haunted by a memory loss that leaves him unable to remember his past. Though successful in the corporate world, he leaves it all behind to become a firefighter in the rural countryside and this brings him one step closer to Jo Boa. Jo is a rising star surgeon at her hospital, and despite the brave face she puts on, her own childhood trauma leaves her unable to focus fully on her future. Though the pair inhabit different worlds, they’re both drawn to a mystical forest. In order to sort out their personal traumas and uncover the forest’s mysteries, they must cohabitate among the trees (reason as yet unknown). While they learn more about themselves and the forest, a special romance develops between them. 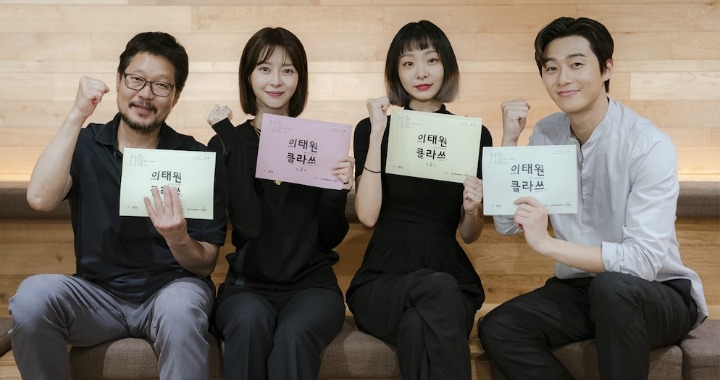 Reasons to watch: Adapted from a popular webtoon, Park Seo-joon headlines as a young restaurateur who’s unyielding in the face of injustice and part of a youthful “rebellion” in the streets of Seoul. The show takes place in the Itaewon neighborhood, and when we meet our protagonist, he’s determined to stop a major food corporation that’s set to create a large presence in that corner of Seoul. For Park, it’s more than just a resistance to gentrification that’s motivating him. The family who own the corporation, Yoo Jae-myung and Ahn Bo-hyun in particular, have had an outsized influence in shaping Park’s youth–for the worse. But after a rocky youth, including time spent in jail, Park Seo-joon is ready to face Goliath and the world. He has a loyal crew of friends to rely on, including genius sociopath Kim Da-mi and a possible new love in Kwon Nara. 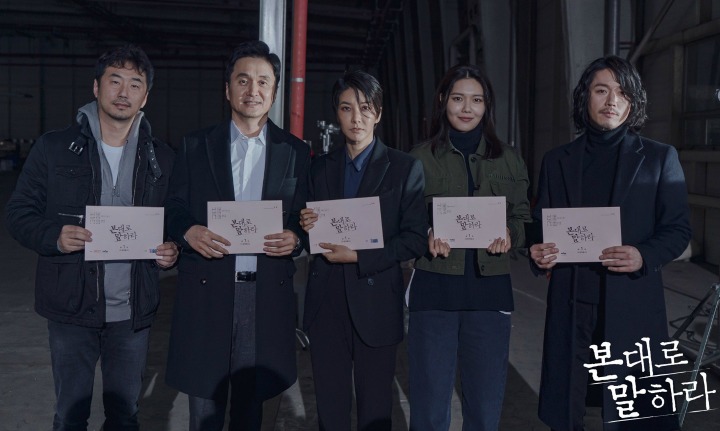 Reasons to watch: Jang Hyuk is back (still holding onto his glorious mane) with Sooyoung and Jin Se-yeon in this dark tale about tracking down a serial killer who was once thought dead. Jang Hyuk plays a genius profiler whose life is irrevocably changed after his fiancee is murdered in a bombing orchestrated by the serial killer. After her death, he shuts himself off to the world and lives as a recluse. Though the killer had been assumed dead, years after the bombing, the killer seems to be active once more and Jin Seo-yeon seeks out Jang Hyuk for his help with the case. Jin has an ace up her sleeve–Sooyoung, a rookie detective with an eidetic memory; it’s a meeting of infallible eyes and an unparalleled mind. The team will need to rely on every available hand and resource to track down the culprit behind so many deaths and shattered lives.

Even I who didn’t really understand the jokes Beanies made about Park Hae-Jin in other posts, I find the synopsis of Forest so funny that I loled.

The synopsis is so funny. How could I not watch this drama?

It’s intriguing. “ cohabitate among the trees (reason as yet unknown)”. Like, am so curious about this reason. And how they will go about cohabitating among the trees. Are they going to build tree houses? Or would they just camp in the forest.
Am here for this mystery!!

Little close to home, this one

I like the idea of Tarzan and Jane that another Beanie mentioned! haha, this show is so unpredictable, literally.

I'm picking up Itaewon Class this weekend. The premise sounds like a bittersweet coming-of-age story.

Yayyy you'll are recapping Itaewon Class! Thanks!
Tell Me What Yoi Saw seems interesting too!

"In order to sort out their personal traumas and uncover the forest’s mysteries, they must cohabitate among the trees (reason as yet unknown)."

I am laughing so hard.

Guys, at least now we know he became a firefighter after. It wasn't a hobby.

Lol. Up to this point, I still don't know what that drama is about. All the best to you, oppa!

Easy, all they have to do is follow the Yellow Brick Road.

🎶 The road is long
With many a winding turn
That leads us to who... knows where
Who knows where 🎶

Separate question: can countryside be anything other than rural?

Another question: Is happy Oppa cycling with closed eyes in the poster Teen Oppa before he lost his memories? Like he knew her before back when he was 15? 15 year old Oppa doesn't wear a suit. Fifteen year old Oppa keeps bangs. 15 year old Oppa looks 20 years younger than Heartless Fireman Oppa...*snorts* *snickers*

Cycling oppa doesn't look 15. Nope. That's oppa after he found his heart and found love. He becomes 20 yrs younger. Or maybe he found the elixir of youth (that's the SECRET)...

Oppa came out on the other side of the memory loss with his forehead out in the open... Yay for not hidden forehead ig 🤷🏻‍♀️

This sounds like it will be all kinds of awesome. The suspense - "reason as yet unknown" - is killing.

I think a key moment in this show will be the construction of a treehouse - to facilitate said cohabitation. Soon after it is built, it will be set ablaze, and the firefighting will kick in, when "Brave-faced" JB will be saved by "good-looking" PHJ.

What happens if the tree gets struck by lightning and burst into flames? How could you jeopardise poor Oppa's safety? Oppa will be burnt alive in his treehouse!

This story is all about death and rebirth - since it's a mystical forest, the lightning strike will lead to Oppa being mystically reborn, phoenix like, and the circle of life will continue endlessly.

Alternately (if you prefer the superhuman trope), the surgical virtuoso that JB is, she will piece together Oppa's good looks. and resurrect him to the corporate firefighting genius he was (including restoring his lost memory - that's how good a surgeon she is).

So you are telling me we're watching a show about how to build and burn a tree house or alternatively a show about plastic surgery? 😱

I bet there is a cottage in the woods. And the bones are buried under the planks.

More consistent. Forest, trauma, mystery, cohabitate. I just don't know how to come up with a theme using all these words together that is clear.

If it's bad, I hope it's hilariously bad. Jo Bo Ah has picked some great roles lately though, so fingers crossed.

Did you watch her pregnancy drama? The name escapes me atm

@maybemaknae I haven't seen Goodbye to Goodbye yet, but it's on my ever growing list.

It feels like I've been waiting forever for Itaewon Class to premiere but it's finally here! I'm so ready for Park Seo-joon and Kim Da-mi to take over my weekends, both are such amazing actors.

Can't wait to watch Forest as well, I have no expectations, just watching it for the cute but hopefully it surprises me!

I'm kinda disapointed that the love story is not between Park Seo-joon and Kim Da-mi's characters.

It seems like Kwon Nara's character is his first love so maybe the main romance will be between Park Seo-joon and Kim Da-mi's characters.

No, I think they will go with the typical love story with childhood love, the pretty and rich girl and not the smart sidekick.

Oh, I thought Kim Da Mi was a female lead. I somehow doubt a a rising star like her would accept being a second lead.

Or the writer will go A Poem A Day route and wait who the audience will choose LOL.

No. They will not. Kim Da Mi is playing leading role and Kwon Nara is not "rich girl", she is a career woman.

@cherryinbloom I think she's the second lead but in the relationship chart, the arrow goes only one way with a little heart and not in the both ways.

Kim Da-mi is the female lead, i’m pretty sure he will end up with her, besides in the teasers they showed a lot of scenes hinting at it

I was not completely crazy! He will be a firefighter in Forest! But more I'm reading about this drama, less the story seems clear...

Ahhhhh all these shows creeping up on me!

I’m definitely watching Itaewon Class & Tell Me What You Saw. But I kinda, sorta, maybe want to check out Forest (ahem Beanies' influence).

Forest is gonna be a secret....trainwreck.

And I am ready for this. I am so ready.

A mystical forest...So is there going to be a fantasy element to this drama? Will the forest be a character in its own right?

I don't know what to make of the vague plot description.

Definitely going to check out Itaewon Class and Tell Me What You Saw.

But Beanies, can Forest beat out Melting Me Softly?

At being tragically uneven?

The word you're looking for is tragicomic

Let's not jinx it!But if it happenes it does says much and deserves it's own win because it takes a lot to beat that one!

If Forest turns out to be solid programming, imma be upset.

Me too, although I don't see how it possibly can be, but i will flip my tables if it makes any sense, lol!

Right ??!!! My expectations are hella low.

I don't think anything can beat out Melting Me Softly. It was so tragic it wasn't even funny.

In Canada - FYI
Viki: Tell Me What You Saw, Forest
Netflix: Itaewon Class

Thank you! I wonder why Forest is on Viki and not Kocowa?

This mysterious forest reminds me of the mysterious tree in That Man Oh-soo (aka Evergreen), which mess.

Oh dear! I had forgotten about it till you reminded of that mess... It was even worse than probably melting me.

Quite excited for Itaewon Class & Tell Me What You Saw even if i confess i wanted in Itaewon Class for romance for him to make a combo with Da Mi,more fun! Till now OCN rarely disappointed me so hope this time will be a hit as well! Forest doens't ring to me yet but i'm gonna watch it as well and maybe i'm gonna adore it!

Lo behold, here i come to watch the forest!!! I will be so dissatisfied if it turns out to make any sense whatsoever, I just want to have my laugh and watch the recap section, atleast I think it will be the best of the currently airing dramas recaps, please bring the sarcasm along, i need it.

The only one I feel I really want to watch is "Forest"... I think it's about time for Park Hae-jin to make a true romantic and sensitive love story. I hope the drama is good. I root for him since My love from another star!

I am excited about Itaewon Class. It has slice of life vibe + PSJ.
Tell Me What You Saw looks like any other common by the number crime drama.
Genius, tortured male lead with tragic backstory+ rookie female lead.
Since it has Jang Hyuk, I will wait for reviews.
Forest is just confusing. It has potential to be utterly ridiculous train wreck from which I will not be able take my eyes off. It will be guaranteed entertainment through beanie wall.

Jang Hyuk is back... ALSO his beautiful, long and dark hair. He looks so sexy, that I don't even care about the plot anymore.

Looking forward to Itaewon Class...funny how in a drama they fight corporations while in real life some of these actors are the public face of said corporations.

Loved Tell Me What You Saw