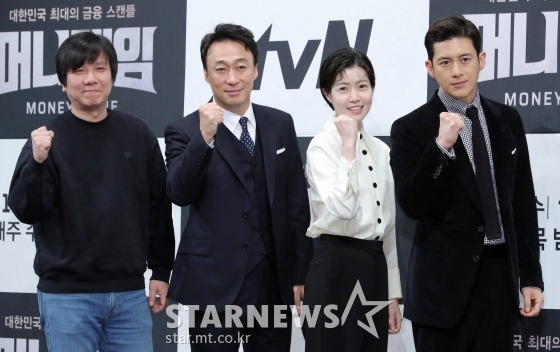 Numbers don’t define a person’s worth, but numbers still have a huge impact on a person’s life and can seem to create very real limits. The very structure of society seems to be proof of this contradiction. How else do you explain a society where a person can work backbreaking hours everyday, yet still not have enough to afford a home? The three protagonists of the show, played by Go Soo, Shim Eun-kyung, and Lee Sung-min, are well aware of this contradiction and have hopes for a better world. But how to bring about a more just society is a matter of debate. Having faced the 1997 Asian Financial Crisis (which was called the IMF Crisis in Korea), Lee Sung-min believes true structural change can only happen by breaking the system. When a bank that the government holds a large stake in seems to be close to bankruptcy, Lee sees an opportunity where others see crisis. Go Soo is a talented economics mind and bureaucrat, and unlike Lee, he sees disaster in the bank’s possible collapse. While he works to forestall an event that could upend the nation, he may have an ally in Shim Eun-kyung. Though she’s from a humble background, she’s willing to bet a safe job in order to battle against Wall Street. The stakes are high and the fate of an entire nation hangs in the balance.

Seems it will be an interesting drama. Happy to see finance profession being portrayed in K-Drama

The last finance-related drama I watched was Midas. This is next!

I want to watch Midas but its access restricted for my region :(

Enjoyed the first episode. Very interesting to see the asian financial crisis from a Korean perspective.

Lee Sung Min having faced IMF? This is a direct nod to Miss Korea! How I loved his character arc there!

The first episode was fantastic till the last 1-2 minutes when it descended into melodrama. Lee Sung-min sold the fury and anguish, but bearing in mind what his character Heo Jae stands for, I really didn't appreciate the writer burdening him with that kind of thing. Like LSM, Shim Eun-kyung rises above a rather cliched sob story background with a tightly controlled performance. Go Soo is definitely the weak link of the main trio, but so far he is pretty convincing as a harassed bureaucrat.

Sigh. If the Chaebol and bankers and politicians of South Korea would only try to be as virtuous as the small restaurant owners, the nation would so much better off. The noodle-shop owners of Seoul have the combined wisdom of the Elves of Lorien and the Half-elfs of Rivendell combined.

It must be true. I've seen it in so may Kdramas.