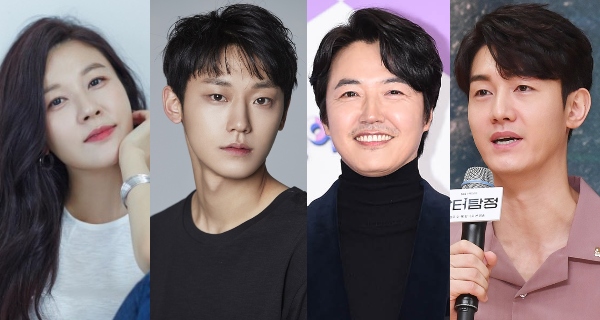 JTBC has confirmed the lineup for its upcoming drama 18 Again, which is a body switch drama adapted from the American movie 17 Again. The drama will highlight the relationship of a middle-aged married couple. One day, a 37-year-old man is served divorce papers from his wife, he’s ignored by his children, and he’s fired from his job. Miraculously, the next day, he wakes up in the body of his 18-year-old self and gets a second chance at life. How will this change his relationship with his wife?

Kim Haneul (The Wind Blows) will be playing the main character’s wife, a working mom who has twin children, a boy and girl. She started her career late, and is currently working as a rookie news announcer. She approaches her work and family with a professional efficiency, but also with a very warm human touch.

Yoon Sang-hyun (Let’s Watch the Sunset) plays the 37-year-old version of Kim Haneul’s husband, who is a very ordinary ajusshi. However, back in his high school heyday, he was a hotshot basketball player with a great body and lots of popularity amongst his peers. Lee Do-hyun (Sweet Home) will play his eighteen-year-old version, and he ends up taking on a new name to blend in during the present-day.

Lee Ki-woo (Doctor Detective) will play a local high school basketball coach. I can already imagine the hijinks of trying to chase down Yoon Sang-hyun, the ajusshi-in-a-basketball-star-body, and make him play for his team.

Directed by Ha Byung-hoon (Go Back Spouses) and written by a team composed of Kim Do-yeon, Ahn Eun-bin, and Choi Yi-ryun, 18 Again will begin airing on JTBC in the latter half of this year.

Oh! I like the sound of this. Also like the cast. Yay! Should be a fun watch.

Kim haneul is back.. can’t wait!

Really loved the original movie. Sound like they keeping the part about him going back to high school where he interact with their two kids. Was very funn part of the movie as he was playing cupid for his son and learn some things about his kids. Gonna be interesting to see how they adapt this into kdrama format. At least it have some universal message about lost dreams, family, children and love.

Is the world ready for yet another body switch drama?

It's not a body switch drama though, that wasn't a good way to describe it. He just turns young overnight. This is based on the US movie where Matthew Perry wakes up one morning as his young self, played by Zack Efron.

Choi Bomin of Golden Child (ATEEN 2 and Melting Me Softly) was also rumored to join the lineup! Exciting! <3

Maybe he'll play as the son. 😊

omg it's based on 17 again! my interest has peaked! i kind of ignored the casting news when it initially came out because i thought i wouldn't be interested in the story but 17 again is one my favourite movies so i'm 100% going to check this out when it comes out