First script reading for tvN’s A Piece of Your Mind with Jung Hae-in, Chae Soo-bin 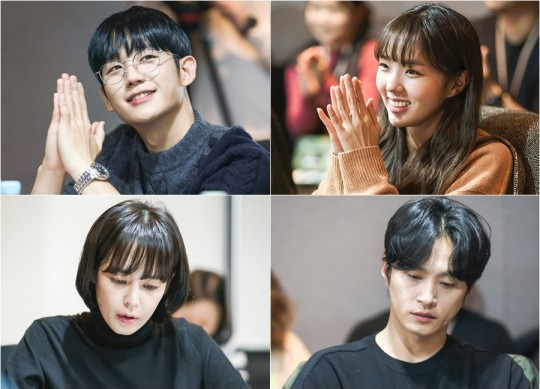 The first script reading was recently held for tvN’s upcoming Monday-Tuesday drama A Piece of Your Mind (a.k.a. Half of a Half) and new stills have now been released.

At its core, the story is about unrequited love and the drama explores how it starts, how it grows, and also how it ends. The focus will be on romantic love that’s both given and returned, and how its warmth is like the coming spring that melts away the winter cold.

Jung Hae-in plays one of the main roles, the character of Ha Won. A programmer in the field of artificial intelligence, he spent his youth living in Norway where his only friend at the time was a girl named Ji-soo. She meant the world to him when they were growing up and his crush on her is still going strong 10 years on from their time together.

Chae Soo-bin plays the character Han Seo-woo, a recording engineer in the classical music industry. Rather than over-complicating matters, she prefers to see things from a simpler lens and likes to live a simple life. She may not live in the nicest apartment and she has yet to secure a steady job, but she is ever the optimistic and has faith that things will work out in the end.

Through the course of the story, Jung Hae-in and Chae Soo-bin’s characters somehow cross paths and despite Jung’s longstanding feelings for his first love, he finds his resolve is shaken when Chae enters his life.

Written by Lee Sook-yeon (On the Way to the Airport) and directed by PD Lee Sang-yub (Familiar Wife, Shopping King Louis), tvN’s upcoming A Piece of Your Mind is currently set to premiere next month on March 23.

Another drama where the lead is involved in AI.

I'm telling y'all, Skynet is coming for us all.

May be it is here and silently planning to take over the world. Increasing number of shows with people working in AI - it is his way to make favorable impression of AI.

This is my cup of tea! Also, I love Jung Hae in, and I also like very very much Chae So bin!!! I think this one can be one of my favorites of 2020

Actors I like?
PD and Writer I don't want to fight in hand to hand combat?
Premise I am not altogether against and character descriptions I find interesting in spite of cliches?
...
It's gonna burn me isn't it.

Yes, it definitely will. But we'll watch anyway.

I'm curious about the story, I read quite some translation post. So chae soobin will help jung haein to get jisoo, but jisoo is said to be married with kim sungkyu charater. I wonder if they married in the middle drama or not. Both jung haein and kim sungkyu fight for jisoo. I'm interested how chae soobin helps jung haein and their relationship with kim sungkyu since she is a classical recording engineer and he is a pianist. Also lee hana character is a gardener, so how she will progress in the story. Anyway I'm excited! I like their acting

I love the casting. Chael Soo Bin seems to be going the sci fi route and I am here for it.

Even the supporting cast looks quite young. I guess there will be no parents or older co-workers in this.

Jung Hae-in gets me. Every. Freaking. Time. The face. The eyes. The emoting.

Truth!! I'm right there with you...every time. He has killer 'puppy dog' eyes.

Yes! But he's got the emotional range to turn them dark and cloudy in an instant - like every time he was having a conversation with the annoying boyfriend in One Spring Night. *swooon*

Exactlyyyyyyyyy! Those were the best moments!

Not to mention that smile 🥰
Oh, and remember those abs in WYWS and SitR? 🤭

I went down the rabbit hole that is YouTube to go watch these scenes again >.<

rewatching swoony scenes on Youtube is one of my favourite rabbit hole pass-times. it's like a timeless vortex and oops! You just spent the last 3hours watching videos that will probably not advance you in life...
* helpless sigh *

But they will advance you in other things.

@kethysk I'll leave it up to interpretation. I'd hate to scandalize the youngsters.

Jung Hae-in, I could be in.
Chae Soo-bin, I only watched her in Fox Bride Star and I don't want to remember that drama.
I don't really understand the plot.
Beanies will tell me if it's worth it, I guess.

I hope it is

Watch “I’m Not A Robot”.... it will help ease the pain of “Fox Bride Star” if not completely get it out of your system

It was such a mess, and the worst "one year later" epilogue I've seen.

I hate those lazy-writing time skips!!!

@eazal,
Chae Soo-bin was terrific in REBEL: THIEF WHO STOLE THE PEOPLE. And I enjoyed her performance in HOUSE OF BLUEBIRD, too.

@oppafangirl didn't you miss him 😅😅
@shindy

My guy is not a fan of my drama watching habits. But every time something to do with AI comes in (he is an AI Scientist) I drag him down to watch. After a few minutes he rolls his eyes and goes away. I guess this one will be the same...

Even if the ML works in AI technology, it doesn't sound like SF drama.

For Chae Soo-bin and Jung Hae-in I would watch anything,, so glad to see them paired up together, marking my calendar for this one!

I have concerns over a plot that's this vague. It could really go in a bunch of directions. And most of them bad. I hope this drama proves me wrong because I approve strongly of the casting.

Thank you for the update on A PIECE OF YOUR MIND, @tccolb. It sounds as if there may be a love polygon of some kind, but I'll tune in to see how the show deals with unrequited love, etc., etc. Over the course of 108 episodes, I thoroughly enjoyed PD Lee Sang-yeob's approach in THE KING'S DAUGHTER, SOO BAEK HYANG, and am betting that A PIECE OF YOUR MIND will be done just as well.