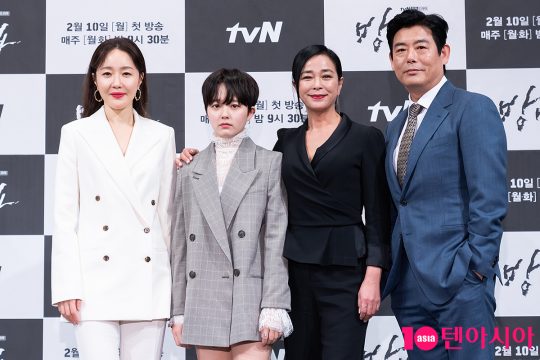 There’s another forest at the center of an upcoming drama, but this one takes on a super creepy edge. In The Cursed, Forest is Korea’s top IT company. It’s led by a chairman played by Sung Dong-il — but he’s being shadowed by an evil spirit, which makes me think the IT company is up to no good in its dealings. A reporter played by Eom Ji-won is determined to uncover the dark secrets that lurk at Forest, and she teams up with a teen played by Jung Ji-so (who has a sixth sense of sorts) to fight the evil, and bring it to light. Jo Min-soo rounds out the cast as a spiritual consultant and shaman, but it’s actually the literal translation of the drama’s title (“Method”) that piques my interest the most. The Cursed was written by Yeon Sang-ho, the director of Train to Busan, so this drama already has a ton of credibility out of the gate. Add in the fact that the drama also has a refreshing 12-episode count, and I’m expecting a pretty tight story. And also one that’s a little more creepy than I will probably be able to handle.

This is the first pure horror k-drama I'm hearing of. I hope its scary. I'll surely be checking it out but towards its end so that the episodes can be marathoned.
Must watch Train to Busan before that!

he’s being shadowed by an evil spirit, which makes me think the IT company is up to no good in its dealings.

The snark-post practically writes itself. You think an evil spirit is required for an IT company to be up to no good?

Evil spirit gets blame for everything. Although I wonder how it plan to do evil through an IT company? Send out bots and spams?

As much as I admire Sung Dong-il I don't think I can watch it.
I really don't like horror movies or series (besides the X-Files).

X-Files is not a horror series though. It's sci-fi. :)

I know, although has some eps that are on the edge of horror (I'm thinking about Tooms...). And that's all the horror I can handle. I'm a bit chicken, you know (in fact, a lot).

Someone stole Jung Ji-so's skirt (or trousers) and she had to wear Sung Dong-il's spare jacket to cover up. She's clearly well annoyed about that.

Or she was cursed by the wardrobe department

I never actually look at those photos but will always do so now. That's hilarious.

I want this drama tbh

The Year of Secret Forests.

The literal translation of the title is actually “Curse” or “Cursing”, as the Hanja they use for it is “謗法”, instead of “方法” (which would mean “method”).

I didn't even know horror was a genre in k-drama!

Let's just be glad this is not a romcom horror.

So true! But why oh why. Horror is such a difficult genre to pull off well. Anyway, I know what I will not be watching this season...

Hehe. The most recent horror I like was The Guest. I think we did sorta have a horror rom com before in Master's Sun. But the horror dropped off after episode 4, for which I am thankful.

Watched the first episode and so far appears better than I expected. But then far too many dramas seem to go downhill after about 1/3 of the way in. I am a sucker for strong lady revenge shows though, so it will probably suck me in.

If this is pure horror or reallllllllly dark comedy/horror then I’ll watch it. But if the premise falls apart for romance then I’m bailing.

Where is this streaming? I checked Viki, Netflix and Kocowa - I'm in Canada - and can't find it. Sometimes things do show up with a different title.

I'm not a fan of horror genre but this supernatural thriller is watchable 😂 The first thing captured my attention was the child shaman who can kill! The villains who killed her mom: the female shaman and the corporate boss she served were another mysterious, interesting characters. Not to mention the rituals shown were creepy but kind of real and interesting to watch. A lot of twists and turns in each episode, enough to make me glued to this drama till the end. Bad guys will get creepily bad ending and the good will always win in the end, also in a creepy way . Great cast especially the child actor. Over all its a good, enjoyable watch.