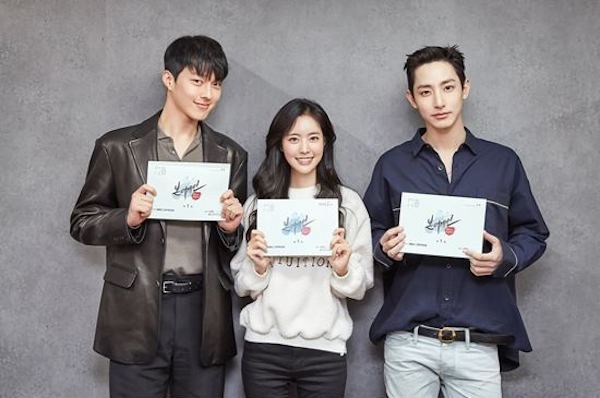 Less than a month after the finish of Gantaek: War Between Women, Jin Se-yeon (Item) was photographed at the first script read for her next drama, Born Again, along with her co-leads Jang Ki-yong (Search Query: WWW) and Lee Soo-hyuk (The Man Living in Our House). Born Again tells the story of three reincarnated souls that have been intertwined together by fate.

In the 1980s storyline, Jin Se-yeon plays the owner of a used bookstore who treats her customers warmly, like old friends. Unfortunately, she has congenital cardiomyopathy and could die at any moment. In the present-day storyline, Jin Se-yeon plays an archaeologist who uncovers the skeletal remains of the nameless, and restores their stories to them.

Jang Ki-yong plays the dual role of a lone wolf who defies his evil father in the 1980s, and an elite medical student in the present. Lee Soo-hyuk plays a pure-hearted detective in the 1980s, and a prosecutor who believes in a “criminal gene” in the present. The three become involved in a passionate love triangle that endures beyond death and time. 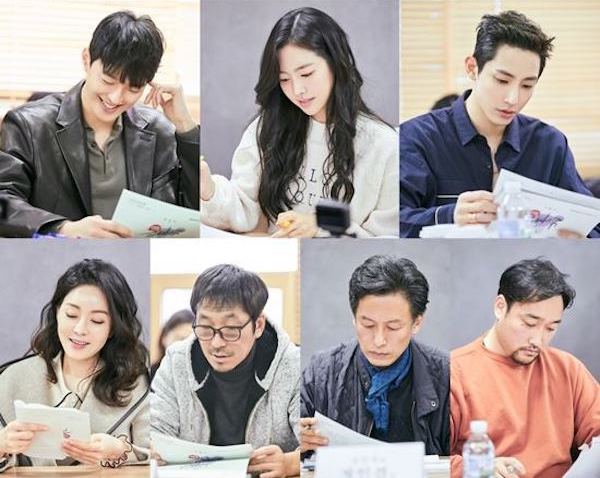 The head of KBS Drama, Moon Bo-hyun said the following to start off the script read: “After a four-month break from airing Monday-Tuesday dramas, we are ready to energetically begin this project. Because so many talented actors have been gathered for the show, I have high hopes. I hope that everyone can build good memories around this project.”

The supporting actors were also present at the script read. Kim Jung-nan (Crash Landing on You) plays a provocative, dangerous woman with strong charisma. Choi Kwang-il (Forest) adds a weightiness to the drama with his serious presence. Jung In-gyeom (Doctor Prisoner) plays the face of absolute evil. Jang Won-young (Rescue Me 2) plays a shameless, crafty character who provides comic relief.

I don't have a lot of hopes from this drama but at least there isn't any big age gaps and the visuals are a good match.

I dont know what to expect from the story but it'd been a while i see any memorable love triangle. Those time i have second lead syndrome and such, kinda miss it kkk cause i feel like LSH is gonna be 2nd lead again..
Anyway, just finished Queen: war and love, excited to see Jin Seyeon in modern drama.

Oh please, is there a female lead in any k-drama that is NOT "warm hearted"? (at least according to the official descriptions).

Writing flawed , no so sugary sweet, likable FML takes efforts,time and that is reserved for ML only.

Lee Ji An from My Mister!! (or was this a rhetorical question? lol)

Yes. There have been a good many selfish spoiled salty and/or prickly heroines in K dramas.

In the actual characters yes, I am just referring to the official descriptions. I looked over about 15 that had women leads, and 8 of them had that "warm hearted" or something similar line in the official announcement.

@Tabitha, could you please say the titles of the dramas you mentioned?
Sadly, I can't find dramas with a heroine who isn't warm-hearted and all that.

Couple or Trouble AKA Fantasy Couple.
The FL gets kinder but she never becomes especially warm or cheerful.

Arang and the Magistrate has a stubborn practical ghost girl who is basically good enough but complicated and tough by circumstances.

Any well written realistic Prosecutor or Cop Drama should give you tough not really sweet natured heroines.

More nuanced FL's are available in K web dramas that aren't "pure" in their love triangles.

Hmm yes - the FL in single cunning lady (sly & single again) is not warm hearted according to the drama description.
There are plenty of other dramas where the FL are described with words that exclude Warm & pure.

It's a different matter that most of them turn out to be candy.

None of my previous guesses were correct. FML was bookstore owner in previous life and now she is archaeologist. I wanted her to be mafia boss who seduced both ML and SML for her gain and destroyed them. She was just plain vanilla candy sprinkled with heart disease.

uncovers the skeletal remains of the nameless

Sorry, but to me "nameless" conjures nameless evil, he-who-must-not-be-named, etc. But pretty sure show isn't going there.

a passionate love triangle that endures beyond death and time

Ok, as long as it doesn't endure into a season 2.

What if season 2 includes third reincarnation? They can born again in future. We can have love triangle between cyborg, zombie/vampire and humanoid alien.

This comment made my day. Thanks for making me laugh!

Soo Hyuk has to be the vampire zombie. Then I would gladly watch.
And then the JKY and Kingdom Universes would be one and I would be a happy shitposter.

That will be drama heaven

All these intertwined characters already sound messy. Hope the writer can get who’s who straight. KBS tends to have flops over flops. I think a third reincarnation with puppies and kittens may seem more appealing.

... the next installment in the Jang Ki Yong Cinematic Universe is LITERALLY called Born Again. You're making the jokes too easy for me guys.

I would be more excited for this messy sounding show if I didn't utterly dislike the female lead's complete blandness.

What is provocative, dangerous woman with charisma supposed to even mean? It's like they just took a bunch of fancy words and meshed it together.

Born in the 1980s and reincarnated now? Really? I was born in the 80s and as far as I know I haven't been reincarnated yet. Is the gap really that long between now and the 80s that people born those years are getting reincarnated already?

LMAO now you’ve pointed it out it... it sounds weird. I think what they wanted to say was they were adults in 1980s when they died.

They should at least let one of two leads sport mullet hairstyle.

As much as I like Jang Ki Yong I don’t thing I can go with three premise that the 80’s are past enough to have a reincarnation.

Is it just me or Lee Soo-hyuk looks really unnatural?

If it wasn’t for Jang Ki-yong, I wouldn’t consider it 😍. However, I’m not so blinded by him to stick around a drama that sucks, so it better be good. Terribly jealous of Jin Se-yeon, who gets to act with all my favorites. Yoon Shi-yoon, Kim Min-kyu, and now Jang Ki-yong.

Right, the moment I saw her name as the female lead, its a pass for me!
Lol is no other better actress in k-entertainment?

What baffles me is how she keeps on getting project after project! It's never ending!

And they all get good ratings!

She has no range. Her acting is always the same.

I'll watch! It definitely seems this is more like a "next life" than a reincarnation. I think the English word may have a different interpretation; anyone know the Korean title and the meaning?

But yeah, I think someone pointed out last time, but it definitely sounds like the trio dies young (thus tragically) in the 80s and then it seems like the Powers That Be hit the reset button almost immediately to course correct.

Either way, I'm looking forward to it. I recently watched all of Scholar Who walks the Night just for Lee Soo Hyuk lmao (who was fabulous) and am looking forward to what kind of character this will be. I've always liked Jang Ki Young. I haven't seen Jin Se Yeon in anything but Gaksital and a drama special, so we'll see, but if her character is an active part of the story I'll be happy.

How are reincarnation and next life different things? You get reincarnated into your next life.

I was asking because people were talking about how dying in the 80s is too soon to warrant reincarnation.
Popular depiction can vary which means that their may be different interpretations. Born into the same body but with a different personality, born in a different body with the same personality, different personality different body etc. But this all happens years and years later (often times a couple decades or so).
I was really thinking about when person dies, another is born and how that can be a possible next life (as opposed to say an afterlife). So a next life is simply what comes after death (immediately) while I feel like reincarnation is (oftentimes depicted as) more belated.
I asked for the Korean title because I wanted to know if there is a Korean word for reincarnation and if it was used or if, while translating, people selected a word they thought fit the Korean title best. If maybe the Korean title doesn't really translate to "reincarnation" exactly and it has another meaning specific to the culture then maybe it can give more insight into the speedy born again process.

Yeah, if you read the other comments, you would see the first question you ask isn't my own—it's that of the other commenters. All I'm doing is thinking about it because it's fun to think about this stuff and the range of possibilities. Not sure why you feel the need to debate but I don't.

I know I am going to watch this, but that still doesn't stop me from laughing at this:

passionate love triangle that endures beyond death and time.