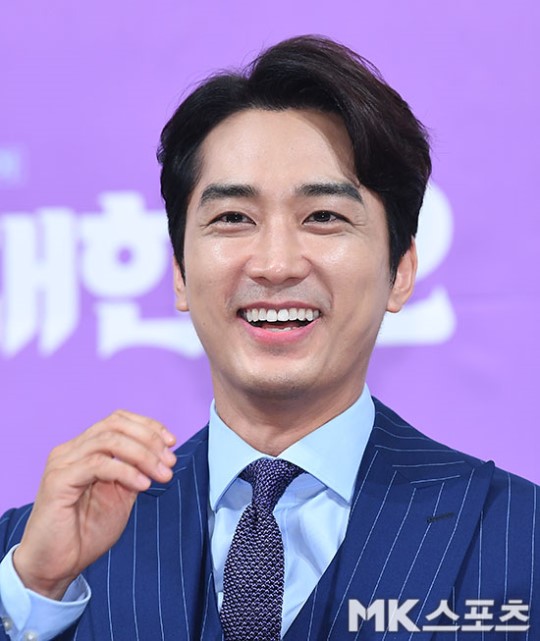 It has been announced that Song Seung-heon (The Great Show) will be starring in MBC’s upcoming Will You Have Dinner With Me. The drama centers around overcoming the scars of breakups. Due in part to Korea’s “solo” culture (a trend where single people do everything alone), the two protagonists found that that their feelings had atrophied, but love slowly grows between them as they share meals together.

Song Seung-heon will be playing the part of an expert food psychologist who helps people with food-related therapy. During therapy sessions, he has a gentle manner, but when it comes to rating food, his criticisms can be venomous.

Based on a popular webtoon by the same name, Will You Have Dinner With Me will be produced by Victory Contents, written by Kim Joo, and directed by PD Go Jae-hyun who has worked with Song Seung-heon previously in Player and Black. Fiery Priest’s Park Jae-bum has also joined the team as a creator.

There were several times when rumors of this webtoon getting a drama adaptation were bandied about. In 2015, Shin Mina was offered the part of the leading lady, but two years went by, and in 2017, Park Bo-young was offered the role same role. Then, there was no news about the project for a while, but hopefully 2020 will be a lucky year for this project.

Monday-Tuesday MBC drama Will You Have Dinner With Me is scheduled to air starting this May.

Tags: Song Seung-heon, Will You Have Dinner With Me

ML heals people through food as a psychologist and kills people's career who are making food as a food critic.
So this is Kill me heal me -food edition?

More like Money Game? He scarred them by his harsh critic, so they'll come to his clinic for consultation. That sounds like an excellent money making scheme.

That's quite possible. But ML can not be morally dubious /totally dark character right? He will distribute money to needy people. We can call it Robin Food.

But I think Kill me Heal me will work out too. He already has two personalities- psychologist and critic. On side note I am hoping FML will have at least one personality.

We haven't heard anything about FL. Hope you're right.

Food psychologist. Yeah, that sounds like something I would stay up until 3 AM to watch. Or maybe not.

The networks must be desperate for new plots, but I don't see this one as going far.

I've read the webtoon, it's lovely, but I never would have visualised him for the hero! I'm interested to see where this casting goes now.

I read that his leading lady will be Seo Ji Hye who’s currently starring in Crash Landing On You as Seo Dan. She’s so beautiful that I can’t take my eyes off her whenever she’s onscreen! Throw in SSH and the visual level will be insane.

@cherryinbloom,
That's exactly what I was thinking. We'll have to wear welding masks to avoid being blinded. ;-)

I was surprised to realize that I've already seen Seo Ji-hye as the villainess in 49 DAYS; HYANGDAN; JEALOUSY INCARNATE (with Kim Jung-hyun, so CLOY is a rematch); TV movie SNOW LOTUS / LUCID DREAM [Netflix title]; and in RAMPANT with Hyun Bin. I didn't even recognize her.

I don’t know why but her make up in CLOY for the past few episodes really bother me. It thought it might be a screen issue but no one else seemed off. She’s still gorgeous though!

I hope Seo Ji Hye gets the part. It's about time she gets more lead roles. She's gorgeous and she makes me like her characters despite always playing the 2nd lead.

Thanks for your report on WILL YOU HAVE DINNER WITH ME, @tineybeanie. I'm getting vibes of LET'S EAT crossed with the vitriolic reviews of misanthropic film critics. Sounds as if uri food psychologist needs to see Dr. Lee Kang and Chef Moon Cha-young for a CHOCOLATy attitude adjustment. And maybe a standing date at Quiznos with Yun Min-yong, Ji-yong's hyung. ;-)

I'm interested to read that PD Go Jae-hyun will again be directing Song Seung-heon. I thoroughly enjoyed SSH's performance in BLACK, and his turn in PLAYER was also very good. Although the premise of the show sounds a bit weird, it's not giving me agita. So long as grim reapers refrain from barging in on dinner therapy sessions, I'm game to tune in.

Lol I’m just mean and like to make fun of everything Song Seung Hun does... For some reason, I can’t take him seriously 😅😅😅 It’s mean, I know

Oh, were you being mean? I didn't get that at all. 😅 I used to be indifferent to him, but started paying attention after Black. He is actually funny in comedic roles.

Lol Sarcastically mean 😂
I’ve watched him in a few things but could never take him seriously after “Dr. Jin”

*nods*
Yes, he's best in roles where he's not supposed to be taken seriously. He was hilarious in Black.

Lol. I dodged Dr. Jin. Read recaps though. Those are SUPER fun!

He can't act and he admit it. I like a person who is honest. He really find his niche in comedy, imho.

I wouldn't want Park Boyoung to do this drama, simply cause she is too young for him, but the plot is interesting. I would watch it.

This sounds interesting! Food dramas are hit or miss for me, but the premise of this one seems fresh.

If SSH brings the funny AND his haircut from Black AND a closet full of bespoke suits, I will give this show a taste.

Excellent post. I certainly love this site. Keep it up!

I've read this webtoon and I really like its story and the pacing but SSH feels a little too old for me in the male lead role.

Superb, what a website it is! This weblog gives helpful data to us, keep it up.