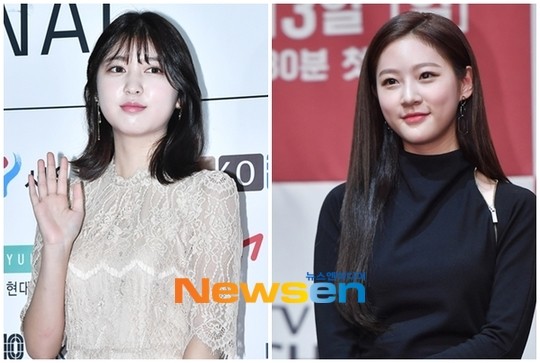 KBS is preparing another drama for its long-running School series (since 1999!), called School 2020. An offer has been made to actor Kim Sae-ron (Leverage, Mirror of the Witch) to play a leading role, following Ahn Seo-hyun‘s (Okja, Revenge Note 2) departure from the show.

X1’s Kim Yo-han previously confirmed casting and this will be his debut role as an actor.

If Kim Sae-ron accepts, she will be playing the lead role of Nam Geum-young. Her dream is to become a successful Youtuber, specializing in beauty and cosmetics, and to save enough money to buy her own building. She would then live comfortably for the rest of her life, living off the income from renting out her building units.

The story of School 2020 is based on a popular book published in 2011, called Oh My Boys by Lee Hyun, and follows the same theme of KBS’s past School dramas. Taking an intimate look at the life of high school students, the drama will highlight the worries and struggles young people face, as well as their passions and dreams.

Directing will be done by PD Han Sang-woo and scripts will be penned by writers, Kim Ji-young and Ryu Sol-ah.

KBS youth drama School 2020 is currently being planned to start filming in March and will be broadcasting in August.

Damnit, I love Kim Sae-ron. I'm just annoyed that KBS have broken the streak of odd-numbered Schools, they had something great going.

Man, this mismanagement of casting isn't going to be great for the drama's publicity... how could the producers be this careless with changing the female lead now? Both the girls must be upset and uncomfortable. Messed up for the adults to screw seo hyun over.

I honestly hope Kim Sae-ron doesn't accept because she would get so much unwarranted hate.

The father and the production don't have the same version. The ones who will suffer from that it's the both actresses.

Her dream is to become a successful Youtuber
Oh...

then to become a landlord....ok ms antoinette!

Does anyone know why Ahn Seo Hyun left the show? Clicking the article I thought the both of them were gonna be in the drama, was a little sad when I saw ASH wasn't gonna be

The two sides of the story don't match up, but what I can gather is ASH was reviewing the work without ever signing a contract. Once contract negotiations started, the production team claim the father made too high of demands and so they went looking for someone else. It sounds like the director was not as much in the loop since he was working with ASH pretty closely just until recently. It sounds like she aced the interview and her father failed the salary negotiation basically. Morale of the story: sign a reasonable contract before putting a year's work into something...
(The above is just how I'm interpreting the news I've seen. No matter I definitely don't blame the two actresses and am super excited for Sae-ron)

I googled it and the one is so young and maybe not handling it the best way on social media.
Maybe she needs an actual agent or lawyer to help with these negotiations and her personal pr and not a parent.

Yeah for sure. There are so much politics in the entertainment industry and if you don't know what you are doing, you end up losing out and feeling horrible that you did. Hopefully, they'll use this as a learning opportunity for next time and as you said get an agent/manager who truly knows the business.

anseohyun7 is an impostor Instagram account (it has 7,438 followers), so Ahn Seo-hyun never posted those comments on social media.

Oh wow O_O that's horrible. I hadn't thought about her fansites/fans. I hope they don't add fuel to the fire (wishful thinking I know).

I wouldn't call an impostor a "fan."

This is horrible. Hopefully she makes a public announcement if she hasnt already so places stop quoting this.

@panshel her post are mostly in Korean with some simple English sentences, I think maybe trying to interact with her international fans? I do not know for sure, but websites like Wikipedia, Naver, Daum all listed anseohyun7 as her account. And there's a casting email on her insta bio.

I don't know who to believe in this situation but I will say this - her father is doing her career no favours by complaining about it publicly. We all know who loses in these situations and it's not the production companies, it's the talent.

Definitely. The company is already ready to sue (for defamation I think) with alleged evidence that his demands were too much. No production company will want to work with them if they know he'll turn on them if he doesn't get his way.

“Something even more upsetting than COVID-19 just happened."

I hope she'd get a good agent to deal publicly with things like this.
This is not reflecting well on her.

even if she did say that, she's a literal teen. this industry is basically evil and facilitates no good will. i doubt she had any true control. and if she really did put all that work in...i hope these people are ashamed of themselves. we'll never know, but i'll never ever trust acquisitions over actors.

I don’t mean to be argumentative or to start a debate, but just for the sake of food for thought:

If she did say that, even if she is just a literal teen, it doesn’t mean that she should be let go of what she puts out to the public, especially if she’s a public figure who has chosen to make her SNS account public, but should be made all the more accountable for what she puts out. She’s a teen, which means she is old enough to know the importance and gravity of a LOT of thngs...
I agree that the industry is evil and doesn’t facilitate good will most of the time (there’s still some good will to an extent— look at IU ♥️), but it doesn’t mean that she, nor the people in her camp— no matter if it’s her agency or PR company—needs to facilitate more meanness into society and make such a comment, especially with the real life situation that’s crippling the entire world right now.
There needs to be more awareness as to what should and shouldn’t be said and done, considering that she’s a public figure and how the whole of the S.Korea society basically sees and treats their public figures as gods and idols (yea.... the idol culture is a whole other thing that can be analyzed, but that’s for another day, another time, not here)

Ahn Seo-hyun was asked to step down, so the poor girl was pretty much fired.

Before casting and the taekwondo premise was ever announced, I was really hoping my favorite child actors Nam Da-reum (2002) and Yoon Chan-young (2001) would star (and blow up) in the next School series. Imagine Nam Da-reum with Kim Sae-ron (2000)!

School 2017, which coincidentally also starred a Produce 101 winner in her debut acting role, was a toil to finish, so I'll pass on School 2020.

I feel so bad for Ahn Seo Hyun. She went from Bong Joon Ho's Okja to this current situation.

Hmm. I will keep my mind open, but damn. Desiring to be a landlord is the literal worst.

Kids, be a YouTuber all you want, sure, but here's a PSA: landlords are gonna be the first under the guillotine.

by far one of my most favorite comments ive seen here. it's so beautiful

I don't like the behind-the-scene drama! Nobody wins when things happen like this. But I am sooo excited to see Kim Sae Ron again, especially in a drama that's fitting for her age and I know she'll rock. She's such a good actress!

I love both Kim Sae Ron and Kim Yohan... I wish Sae Ron will accept the casting. I’m the happiest if this happens 😍😍😍

if they dont get that girl a better makeup artist. she didnt rescue pigs and go vegan for .5 weeks for this.

Well, reading the comments just cemented my opinion. I hope Kim Sae Ron don't take up this role. Mostly because I want her to move away from high school roles so she can naturally transition to more mature roles. Mirror of the Witch could be so much more.