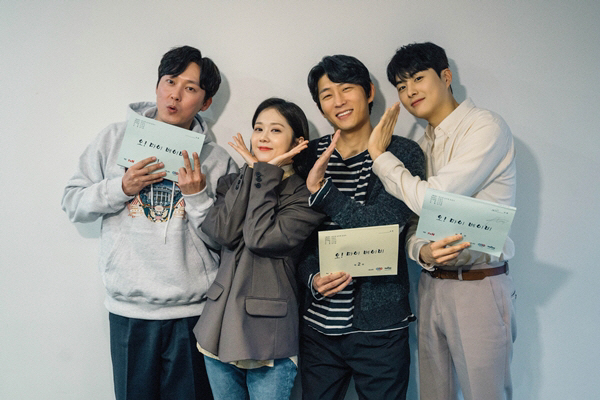 The script reading for drama Oh My Baby, starring Jang Nara (VIP) was held recently. She plays an honest and straightforward journalist who works for a magazine that specializes in infant care. Her character is 39 years old, single, and has no desire to get married–but would like to become a mother.

She may not be interested in marriage, but, she does have three men who could to step up to the plate if she ever gave them the chance. Go Joon (Fiery Priest, Misty) plays the older man, Park Byung-eun (Kingdom 2) plays her male friend, and Jung Geon-joo (Extraordinary You) plays the younger man who may be vying for her affections.

Go Joon plays a photographer who’s like an impregnable fortress when it comes to his will to be single. He’s a prickly macho man, but he does have his clumsy moments. Park Byung-eun plays a laidback single man, who wakes up one day to learn that he’s single parent. He has a bickering, yet caring relationship with Jang Nara’s character. Jung Geon-joo plays an innocent and impulsive noona-killer who meets Jang Nara when he joins her company as a rookie employee.

PD Nam Ki-hoon (Voice 3, The Beauty Inside) said that he wanted to show the as yet unseen side of women’s realities and problems, and create a relatable show. The writer Noh Sun-jae (Mirror of the Witch) says the drama is about finding one’s own happiness, and not living by the world’s standards.

The premise of this drama reminds me of another from 2008 called Three Dads, One Mom, and it was hilarious. Hopefully, the Oh My Baby team will also be able to capture the rich comedy and meaningful moments available in child-rearing scenarios.

tvN Wednesday-Thursday drama Oh My Baby, directed by Nam Ki-hoon and written by Noh Sun-jae, will begin airing in May. 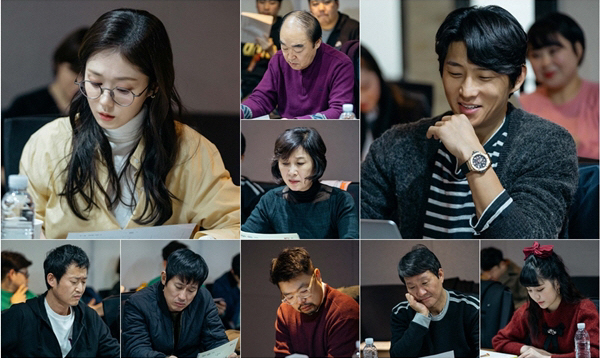 Oh! I didn’t know Jang Nara would return this fast after VIP. Interesting male leads~ unsure about the writer. We’ll see when it airs

Jang Nara makes this interesting!
Is it about her picking the best sperm ; ) and not the best man. Then am in!

Omo,.. I just realised Park Byung-eun was in Kingdom 2. I kept wondering that his character looked so familiar when watching the show!

1. The rough alpha
2. The best friend
3. The sweet younger guy

Looking at the way the photos are arranged, I guess Jang Nara's character will end up with Go Joon's character, although the second male lead (Park) sounds like he would be the better fit since they're already friends and he's a father already.

So we have Hwang Jung-eum about to play a single-by-choice woman pursued by three men and now we're going to have Jang Nara determined to become a single mom, while being pursued by three men. Maybe I didn't just dream up the Story Element Bar. (
See http://www.dramabeans.com/2020/03/memorist-episode-2/#comment-3629782) Maybe determined single woman nevertheless finds love with one of three men was the element of the month recently, with different flavor options. Just sayin'....

Theres also the Song Ji-hyo drama where she chooses from 4 men coming up.

Jang Nara, if she is in it, I will watch. I just love her.

Jang Nara is love! I don’t know why I adore this artist so much!

I am so going to watch this show. I love Jang Nara. She deserves a happy ending after VIP. I'm already rooting for her with the no.1 older guy, he sounds like my favourite kind of male lead, gruff and hard, who'll cave in slowly to her charms.

the cutest boy in the world!

I'm also not sure about the writer, but Jang Nara doesn't need a good script to shine. Nevertheless still hoping the script is good enough.

Another thing: couldn't writernim think of a better title than this？? I've been wanting ask to Hi Bye Mama's writer the same thing.

I hope the show is good too! But i’ll watch anything with Jang Nara! If I survive Empress Dignity and VIP, i’ll sure will with this. I prefer her more in fun dramas...I think i will Love this. The other actors are good as well...Oh...My...Baby...!

So Extraordinary You's actors are sold by pair? Lee Jae Wook and Kim Young Dae in I'll Find You on a Beautiful Day and now Jung Geon Joo and Kim Jae Hwa in Oh My Baby. Kim Hye Yoon will film a movie, who will be her half? :p

I'm happy to see Go Joon, I really liked him in Misty.

Wah? I like all the guys. If I have to choose one, I'll pick Park Byung-eun though.

But if this show is really "about finding one’s own happiness, and not living by the world’s standards" then will she end up with all of them? LOL

That would probably lead to the best comment section ever.

@mary you made me lol

Ok I thought the actor on the far right was Cha Eun Woo for a second!

Thank you Jang Nara for this RomCom as your last two dramas were not. I'm not to sure about the 3rd male lead. The younger one. If he's the one who acted the ⅓ of A3 in extraordinary you, I don't really much like his acting

I am excited to see Jang Nara on screen this early! I fear the script won't be strong because I am unsure about the writer, and the plot seems to be something the kdrama world is delving a lot into recently. However, I trust Jang Nara to hold her own. And it appears Go Joon has an eye for good scripts - what with Misty and The Fiery Priest - so I will trust his presence to be an indicator that this will be good. I'm praying this drama is a success and we will finally see a happier Jang Nara! :p