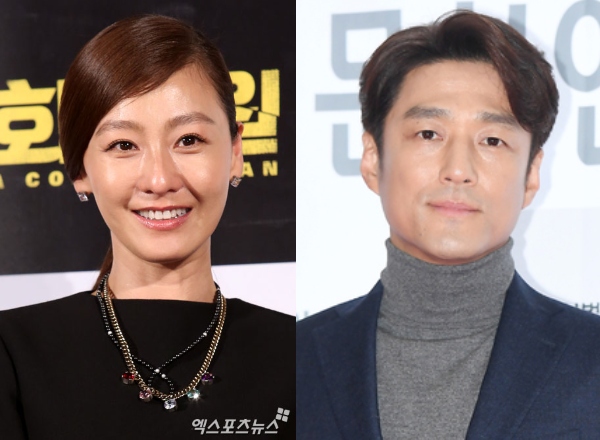 Upcoming drama Undercover, based on a 2016 BBC show by the same name, has announced its top candidates for lead actors. Ji Jin-hee (Designated Survivor: 60 Days) and Lee Mi-yeon (Answer 1988) have both confirmed that they have received the script and are reviewing it favorably, although nothing is set in stone.

In the original BBC Show, a criminal justice lawyer begins to doubt and suspect her cop husband when her personal life undergoes scrutiny for a highly coveted new position as Director of Public Prosecutions. As more and more evidence comes to light, his past comes back to haunt them both.

There’s quite a bit of interest regarding Lee Mi-yeon’s possible comeback because aside from her special appearance in Answer Me 1988 in 2015, her last real drama was ten years ago in Merchant Kim Man-deok. Despite their similar ages, debut periods, and timeline to rise in popularity, it looks like Lee Mi-yeon and Ji Jin-hee have not collaborated on a significant project together so it’ll be interesting to see if they pair up this time.

Currently, there’s no information regarding a possible air date for Undercover, but it will tentatively be broadcast on JTBC.

I'm happy to say "welcome back" to another fantastic veteran leading lady. I love Lee Mi-yeong just as much as I love Kim Hee-ae, Lee Young-ae, Choi Myung-gil etc.
I fell in love with her acting in one of my fave sageuks "Empress Myeongseong" aka "The Last Empress" (2001). Moon Geun-young played the teenage empress and they were equally mesmerizing.
https://www.youtube.com/watch?v=_pVuhKFp-io
(theme song "If I leave" by Jo Su-mi)
Another version by Eun-Ji https://www.youtube.com/watch?v=se6iCPanGkU

It's too bad this is not a sageuk because these two would be so perfect together.
I'd also love to see Yoo Ah-in in a sageuk with Lee Mi-yeon, his dream girl.

Amazing cast, will keep this on the list to watch. What is up with all these remakes?!

I really enjoyed the BBC drama which cast Sophie Okonedo and Adrian Lester in the lead roles. I remember binging this show in a weekend and thinking it's taken until 2016 to have a drama with an amazing black cast and centred around a real, complex family who happen to be black, and issues that are still relevant today.

Am excited to see what case the remake will focus on and hopefully the 16/18/24 episode format will develop the characters and storyline even further than the BBC version.

oh boy do i have so many things to say about this from the original to the remake but i'll spare you all. ji jin hee is hot though so i might fuck around with it. MIGHT. but LOL, i do not think ...

anyone is equipped to handle this story but i'm glad there's not gonna be black actors in this. at the same time, again, lol

*anyone and damn sure not south korea from the source material lmao but it might be a messy as hell watch and twists and turns are fun if theyre evocative and well written!! still gonna critique it though!!!

Yes that is the fun! I hope it is better than the original :)