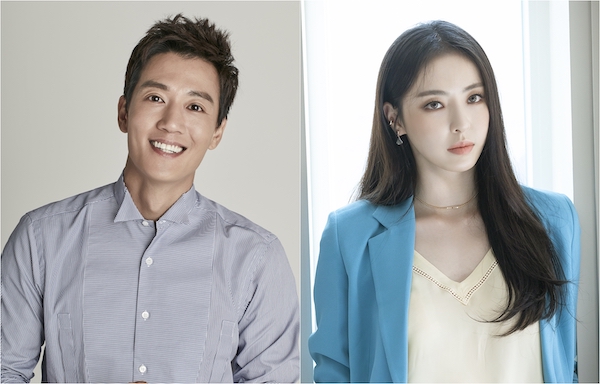 Kim Rae-won (Black Knight) and Lee Da-hee (Search Query: WWW) have been confirmed as the leads in a new drama about genetic engineering called Luca. With Charles Darwin’s Origin of Species as a starting point, this drama tells the story of a man, played by Kim Rae-won, who was born extraordinarily strong and is thrown into a lonely existence as unknown entities pursue him endlessly.

Kim Rae-won’s character, Ji-oh, somehow finds himself thrown into existence. He has no idea who he is, but he possesses a strength unlike any ordinary person. As sudden as his presence in the world is, he’s just as suddenly on the run, as he’s being hunted by people he doesn’t know. While on the run for his life, he uncovers the truth of his identity.

Lee Da-hee is set to play tough police investigator Gu-reum. After finding evidence of her supervisor’s corruption, she’s relocated from the high crimes unit to the violent crimes unit. With a somewhat reckless personality, she’s unstoppable once she puts her mind to something.

Her parents disappeared when she was younger, and she’s obsessed with finding the truth behind their disappearance. Somehow along her journey, she meets Ji-oh, and their combined energy and skills allows them to uncover some of the answers they seek.

Luca will be directed by Kim Hong-seon (The Guest) and written by Chun Sung-il (Your Honor, Level 7 Civil Servant). Personally, I’m a huge fan of Lee Da-hee and the director’s last drama The Guest, but PD Kim has an uneven track record. He was also behind the drama Level 7 Civil Servant, which was a disaster. I also think Kim Rae-won is more suited to sweet comedies. So I’m just keeping my fingers crossed that Luca will take the best of everyone’s talents and turn out amazing.

tvN’s upcoming Luca will begin airing in the latter half of 2020.

I'm not sure about other works by the PD-nim and writer-him, but I can confirm that Level 7 Civil Servant was a total disaster. I sat through watching the drama just because of the male lead. (*facepalm*)

It was an absolute mess, I don't know how I finished it.

The queen is back!

Unnie, fighting! Will we see her with less make-up as she's playing police investigator? Lol.

i know.. am on cloud 9 unnie...this would be one of the most fantastic with some explosive chemistry... i cant wait to see KRW again....

I really like Lee Da-hee but the writer doesn’t exactly inspire confidence, and I seem to dislike all of Kim Rae-won’s dramas.

I don't know about this one... all the alarm bells are ringing but I have to support Lee Dahee, right?

That's so me. I did hear good things about The Guest so maybe just maybe this won't be terrible?

Lee Da Hee! Her progression from being the mean second lead and then Search:WWW/Beauty Inside really helped her break free from that.

It's like she became anew again, that being said this drama sounds like a snooze fest. Last I heard, this was a 12 episode drama. I hope they keep it that way.

Also the male lead is someone who is a veteran but I read that after he didn't get the Daesang for Punch, he's been kind of missing with his drama picks.

Lee Da-hee is great but I am on the fence for this one.

i absolutely love Lee Da Hee and these kind of roles suit her the most. also a fan of the PD's works on OCN so i can only hope for the best

I dont know Kim Rae-won, but Lee Da-hee is awesome. Finally she is the main first character alone! And I kind of like the plot here... let's see how it goes.

Lee Da Hee as a tough cookie. I'd check this out for her. She was perfect in WWW. But the premise sounds familiar to that drama about a boy who has special powers but lost his memories when he was a kid. He's busy right now tracking down a serial killer. And he has a tough partner too, a very good profiler. Lol

May not have watched Kim Rae Won in "sweet comedies" since the only drama I watched with him inside was Punch, but he was so good in it.

Hmmm. I liked him in Doctors and I liked her in www. I dunno sha

I'm just happy Lee Da Hee gets to be the lead in a drama and that they paired her up with a veteran, older actor (although I think she and Lee Jae Wook made a nice pair in Search WWW despite the age difference). I liked Kim Rae Won in Punch so I'm hoping it's more like that and less like Black Knight LOL.

Kim Rae-won always brings a particular intensity to his roles. It'll be interesting to see what he does here.

Lee Da Hae in a leading role!!! OMG!!!
I'm not a fan of genre but I will definitely check this one out.

I love her but this Ahjussi why? I hope there's no love line!