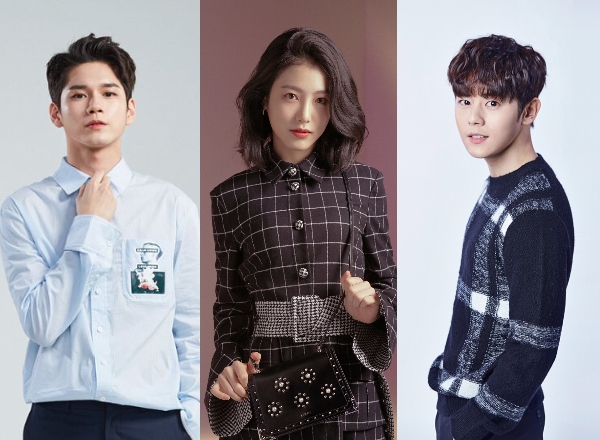 The main cast lineup has been decided for upcoming JTBC rom-com, Number of Cases. Wanna One’s Ong Seung-woo (A Moment at Eighteen) and ZE:A’s Kim Dong-joon (Chief of Staff 2) will be playing the male leads. Shin Ye-eun, who is currently starring in the fantasy cat drama Welcome, rounds out the trio as the female lead. Number of Cases is a sweet take on the fluttering feelings of first love, one-sided crushes, and imperfect timing.

Shin Ye-eun’s character, Kyung Woo-yeon, is inexperienced in love. She’s the type of person who once her mind is set, sticks to it no matter what. For instance, she bravely decides to quit her steady job and become a calligrapher with an all-in, singleminded determination. Similarly, she began to have crush on her friend Yi Soo, played by Ong Sung-woo, ten years ago but for some reason she had to hide her feelings. Due to her all-in nature, she was unable to forget her first love, and so she’s only been in short relationships since. When he appears before her again, things become complicated as she is also courted by a man who seems to have a fateful connection with her.

Yi Soo is a capable, handsome photographer who is selfish in love. Self-centered and arrogant, he’s the embodiment of self-love. Kyung Woo-yeon enters his peaceful existence and begins to move his heart.

Kim Dong-joon plays Ohn Joon-soo who appears to Kyung Woo-yeon as if by fate. The CEO of a publishing company, Ohn Joon-soo is wealthy with a prestigious academic background, good looks and a great personality to match. He’s the archetype of the man who has it all. However, he has lasting scars from a first love that didn’t work out, and he’s shut his heart to anyone who comes near. In Kyung Woo-yeon, he finds a kindred spirit in failed first loves, and his heart begins to open again.

Friday-Saturday JTBC youth drama Number of Cases, directed by Choi Sung-beom (My ID is Gangnam Beauty) and written by Jo Seung-hee, will air in the latter half of 2020.

Ack, I must be getting old, because Kim Dong-joon looks way too young to be CEO of anything.

Hey, take a look at ages and looks of Kdrama CEOs and then look at the CEOs in real life. Even those in their 30s would rarely make it in real life.

Having said that my husband's nephew has been a CEO of a quite large company since his mid-30s and he is very good looking so he would be one of the few who made it.

Shin Ye-eun is popular to cast right now, huh? I can't say I watched either of her things, is she talented?

I'm watching Welcome now and she is actually pretty great there. I really like her.

She's no monster rookie but I think considering her inexperience she holds her own well enough. I mean, she's much more charming than L in Welcome despite having much less experience (and not having a particularly likable character). I liked her in what little I saw of He is Psychometric.

She's been choosing roles appropriate for her age and level of skill. I'll be interested to see how she grows as an actress.

I liked her in the web series A-teen. Also, she was good in 'he is Psychometric'. I wouldn't call her exceptional, but so far she has been good in her roles. I would say, she has potential and probably will be much better in a few years.

I have to agree with everyone that responded. For a new actress that caught her break on a short web series, she's pretty good. Not best new actress award level but way better than alot of other people with more experience. She has a charm to her.

😂😂😂😂😂😂, thanks for the laugh. I'll probably check it out anyway, but this is so accurate.

What's up with Kdramaland this year and people hung up on first love? It's one of my most hated tropes.

this is ticking so many old school kdrama boxes so I hope they do something fresh with them. I love the cast, but the second the male lead starts acting like an emotionally abusive manchild, I'm out.

I'm a fan of both Wanna One and ZE:A, so would just like to share the correct spelling for the 2 actors, based on their official sites. It should be Ong SEONG WU and Kim Dong JUN. This is just so that it'll be easier for the search function.

Thank you for sharing this wonderful news!

I think Dramabeans has a particular romanization pattern that they tend to follow for consistency purposes--for example, they also spell Seo In-guk (the actor's official spelling) as Seo In-gook.

Ahh..okay. Thanks for clarifying about this, mindy! :)

But "seung" is still wrong as it is written differently in hangul than seong/sung. His official spelling is seongwu but seongwoo/sungwoo/wu are also correct as they written by same characters in hangul.

Bring on the next Ong Seong Wu drama!! I love good old cliche dramas when done charmingly. They never get old. The Shin Ye-eun is cute and has charming screen presence. I am looking forward to a fun & summary romcom.

Yay! Ong as a photographer🤩