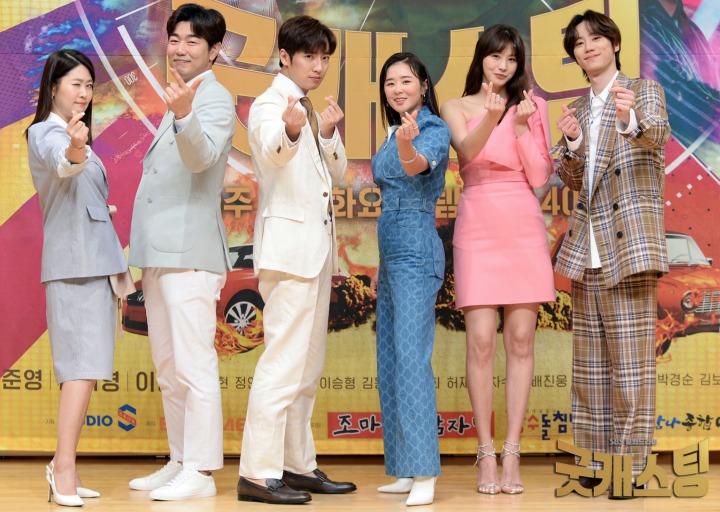 Choi Kang-hee returns to the small screen as a legendary black ops agent who thought she’d hung up her spy hat for good. Her spy career was over after an important mission went terribly wrong. She ended up losing her target and one of her colleagues in the field, which resulted in a prison sentence for Choi. But while serving time, she’s called up to serve her country once more…against the wishes of her new handler, Lee Jong-hyuk, who considers her a legendary handful. He’s not given much of a choice and the higher ups in the NIS pull together Choi Kang-hee, ajumma extraordinaire/NIS pencil pusher (Kim Ji-young), and timid tech agent Yoo In-young for a dangerous mission to take down a cyber criminal known as Michael. They set their sights on two known contacts of their cyber baddie, Lee Sang-yub and UKISS’s Jun. Chaos, comedy, and Choi Kang-hee? Yes please!

Anyone know where it'll be streaming from? Netflix, Viki, etc?

I’m from Australia and it won’t be available on Viki until the 27th of June :(

That’s disappointing to learn. I guess I’ll just have to wait as well.

It’s restricted in Australia and can’t get kocowa here. Any suggestions?

I’m from Australia too and Viki says it’s restricted access - not licensed for this area. So, can’t watch it which is very disappointing. Do you have that too? Not sure to watch it as we can’t get Kocowa here either.

Viki and kocowa have it :D

Viki is streaming it. I've just checked and in my region (southern Europe) it will be "coming soon". I hope this week!!

First episode is up on Viki now - not fully subbed though

Viki but this show is also KOCOWA so you may need the upgraded plan.

How does Lee Sang Yeob manage to do a weekend drama and this at the same time ?

I was just wondering the same thing!

Ah okay - Good Casting is pre-produced, so he must have finished filming that before Once Again began

Weekend dramas will give a couple days ( ~2-3 days at a time) of rest in between filming, especially if they’re ahead of schedule and especially if the weekender is a long-running and ongoing one (50 episodes or upwards) ☺️

Thank god this drama is pre-produced, because this plus a Weekend drama = torment lol.

Speaking of, we get double the Lee Sang Yeob haha!

I'm so excited for this.

I correct myself: tomorrow in this part of the world.

It has lot of nonsense but it's entertaining. I hope that they'll keep up the pace and wackiness for other 14 episodes. Yeah, I have my Mondays and Tuesdays nights covered after Weather!!! Do I sound like Hwi?

First episode was really fun! I am looking forward to watch episode 2 and see puppy Jun in action.

Yoo In-young is so pretty. She is aging backwards!

It had great ratings as well .Infact more than that of King's premier rating.Who says people don't watch tv nowadays 🤔

I hope the show gets to have even higher ratings so we could see the rise of more female-centric fun dramas!

I think they just don't want to watch anything cuddling or sad because of social distancing and all those deadly ill around.

Is the enemy Jang... Michael?

Choi Kang-hee?! Yes please!!!! Omg I have missed her on my screen!!

I couldn't believe she is older than me! In-between these young beanies I started to feel like dried bulb of Poppy Anemone.