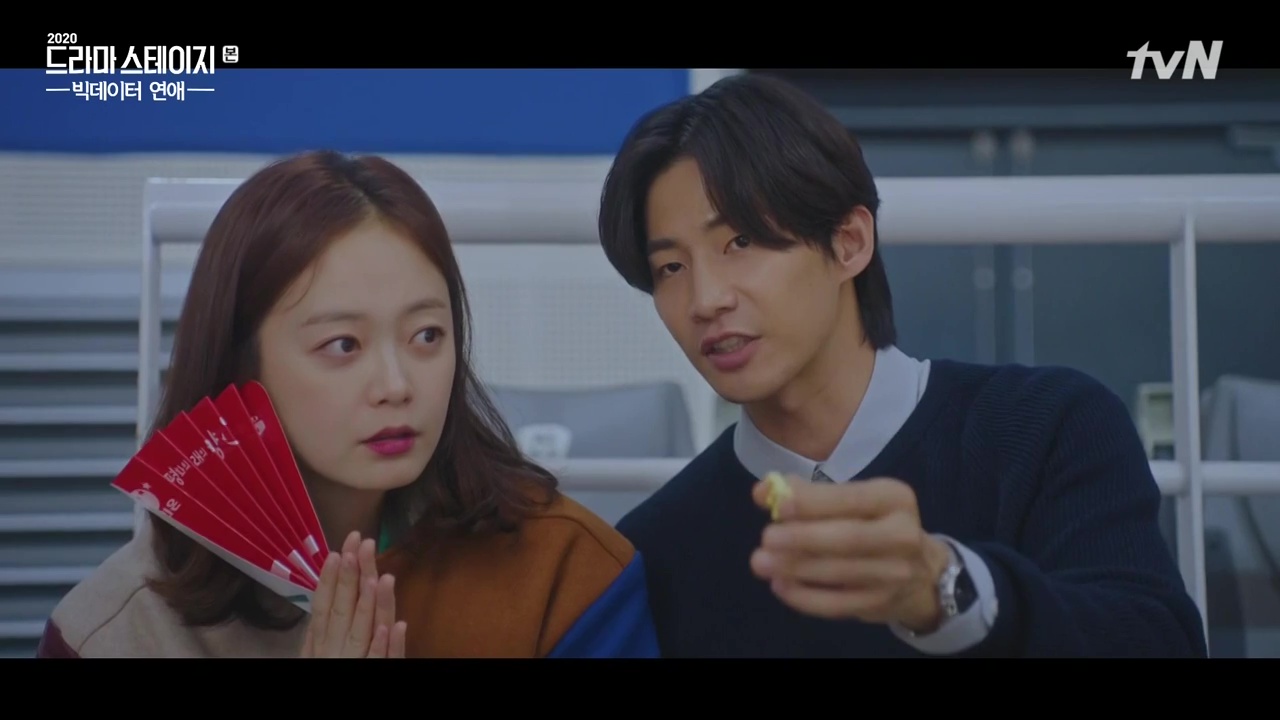 Big Data Romance is a one-episode drama special that aired last Christmas on tvN, and it’s every bit the heart-warming, by-the-books rom-com you’d expect of a holiday drama. While Big Data Romance asks some interesting questions about compatibility versus attraction, it chooses a pretty standard means of answering them. There’s nothing new here, but that doesn’t mean it’s not cute. 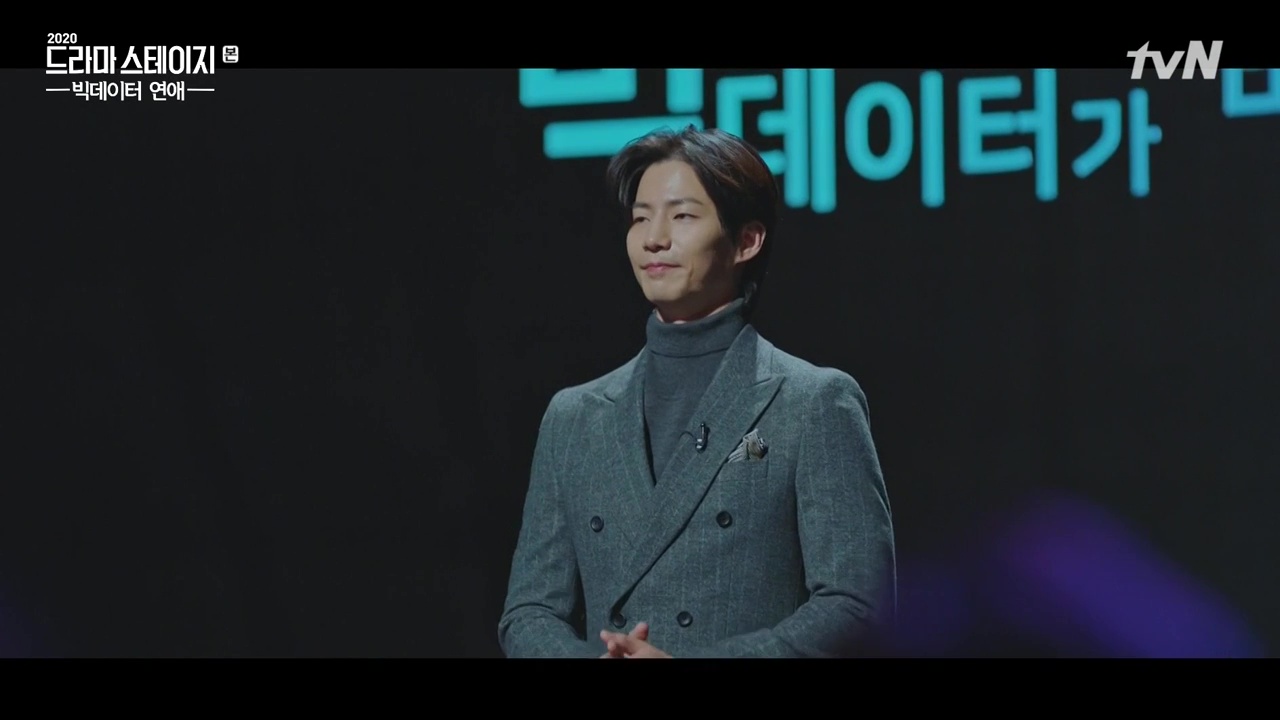 Can a good match be predicted by data? The CEO and developer KIM SEO-JOON (Song Jae-rim) behind the Big Data Romance app sure thinks so. His app is taking over the country by leveraging big data to make matches that last. Seo-joon brags to his users that they don’t have to even bother sharing their likes and dislikes with their match because the app guarantees they’ll be a perfect fit.

Our heroine, a lonely store owner by the name of AHN BIT-NA (Jeon So-min) believes in big data, too, enough to use the app — but she’s also a hopeless romantic that is waiting for her true love. She’s been badly dumped by her past boyfriend, and though it’s left her a bit defeated, she still believes there’s someone perfect out there for her.

The Big Data Romance app has to be able to help her, right? It takes all the question marks away. She’s paired with a guy that matches her likes and tastes to an impressive 94%. She’s positively giddy, but he’s so completely uninterested. He uses the app’s “reject” function to dump her. 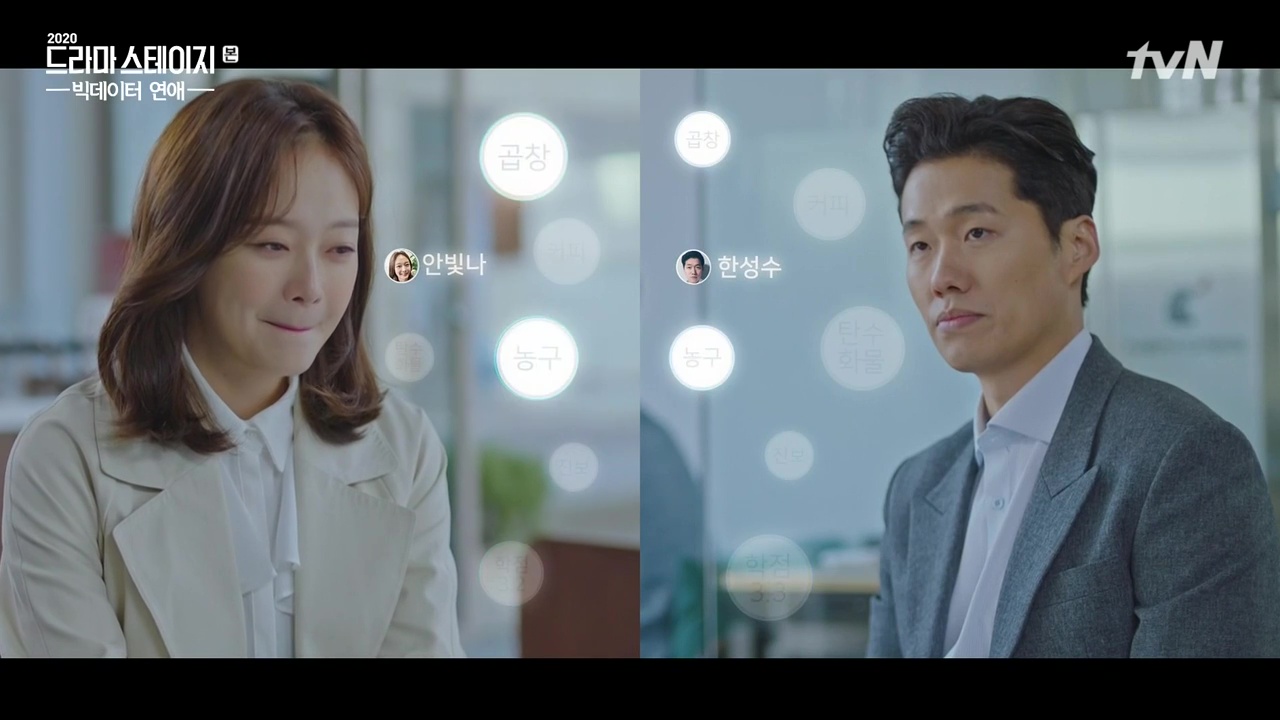 The drama, of course, tells the story of what happens when our two very different leads accidentally get matched up by the app. Seo-joon is the CEO but he’s also a bit of a celebrity. He’s pushed by fans to join and use the app himself (even though he is equally torn up over his past dumping, like Bit-na). He gives in for the sake of the app’s success, and winds up on a date with Bit-na. The app gives them a 90%+ compatibility rating. Imagine his horror when he realizes his big data has failed.

Basketball, vintage, horror films, coffee, and gopchang? These are the things our heroine loves — and our hero shudders at the thought of each of them. How the heck did his program fail? Seo-joon and his partner soon realize there’s a rather huge bug that caused this mismatch. What if it gets out to the press? They’re already analyzing his love life with a magnifying glass; they can’t learn the app has failed. So he does what most rom-com male leads are willing to do: embark on a “fake love” adventure in order to save face. 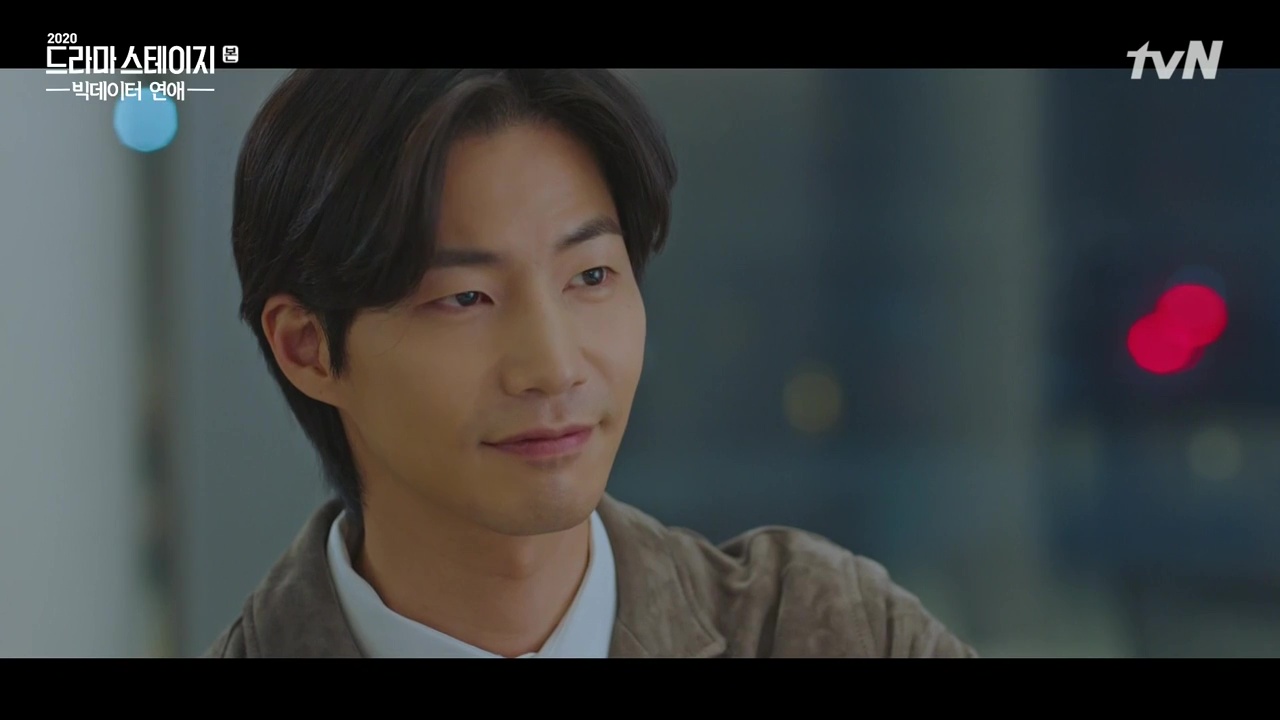 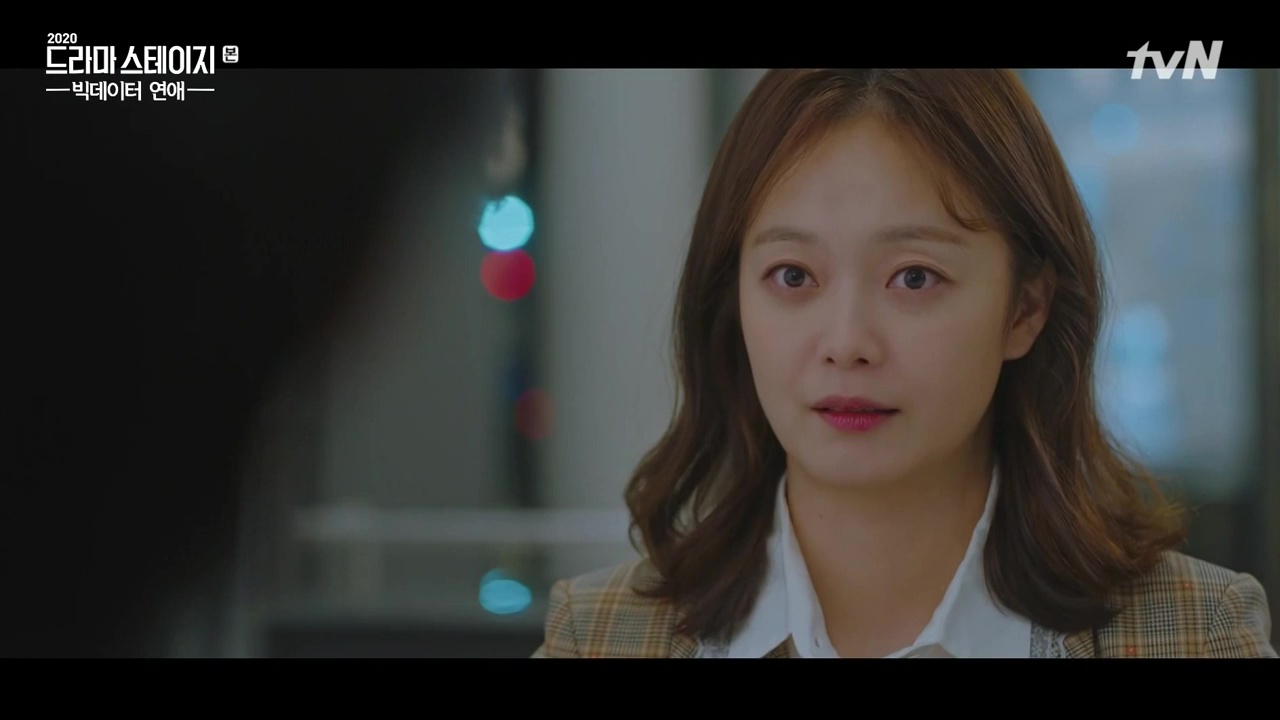 Since it’s a one-episode drama, Big Data Romance moves at a rapid pace. The story that unfolds is utterly predictable, but it’s saved by the fun of seeing Song Jae-rim in a leading role (read: he finally gets the girl) — and his chemistry with Jeon So-min is pretty good.

Where the drama gets a little confused is the true source of its conflict. As Seo-joon and Bit-na start to fall for each despite their huge differences in taste, both have to contend with their exes who come boomeranging back for round two. Both exes are swiftly dealt with, though, and it almost feels as if the drama didn’t need them. Why not focus more on the better, richer conflict of a man who thinks love can be quantified, and a woman who wants to trust her heart and feelings first, but is pressured into trusting data instead. 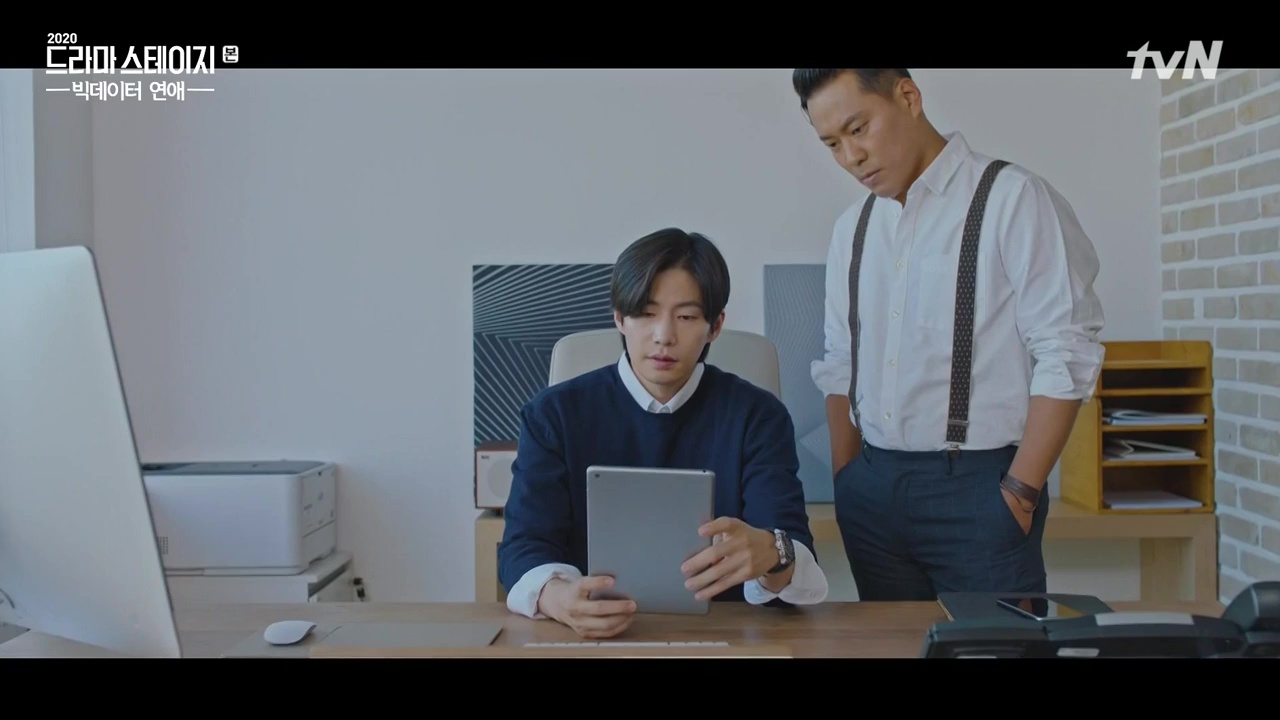 When I heard the concept of this drama, I didn’t expect it to be so much like Love Alarm. Of course the apps themselves are different. In Love Alarm the app uses an unknown means to alert users of physical attraction; in Big Data Romance, the app is all about alerting users of compatibility, and it’s a far more “technical” approach. What they have in common, though, is that both stories look at match-making technologies that expose human emotions (or try to), and then ask what happens when that information is shared.

I really like these kinds of questions and I think they’re pretty germane to our current day, and what dating looks like in 2020. But admittedly, I was looking for a little more substance from Big Data Romance. Love Alarm was a little trippy, but I found it layered enough in its discussion of making attraction and emotions public, or keeping them as something private/internal. In contrast, the argument of Big Data Romance is that data (and having preferences in common) aren’t enough to make a good couple. But we kinda knew that already, right? Well, we might know it, but we must watch our leads learn it. 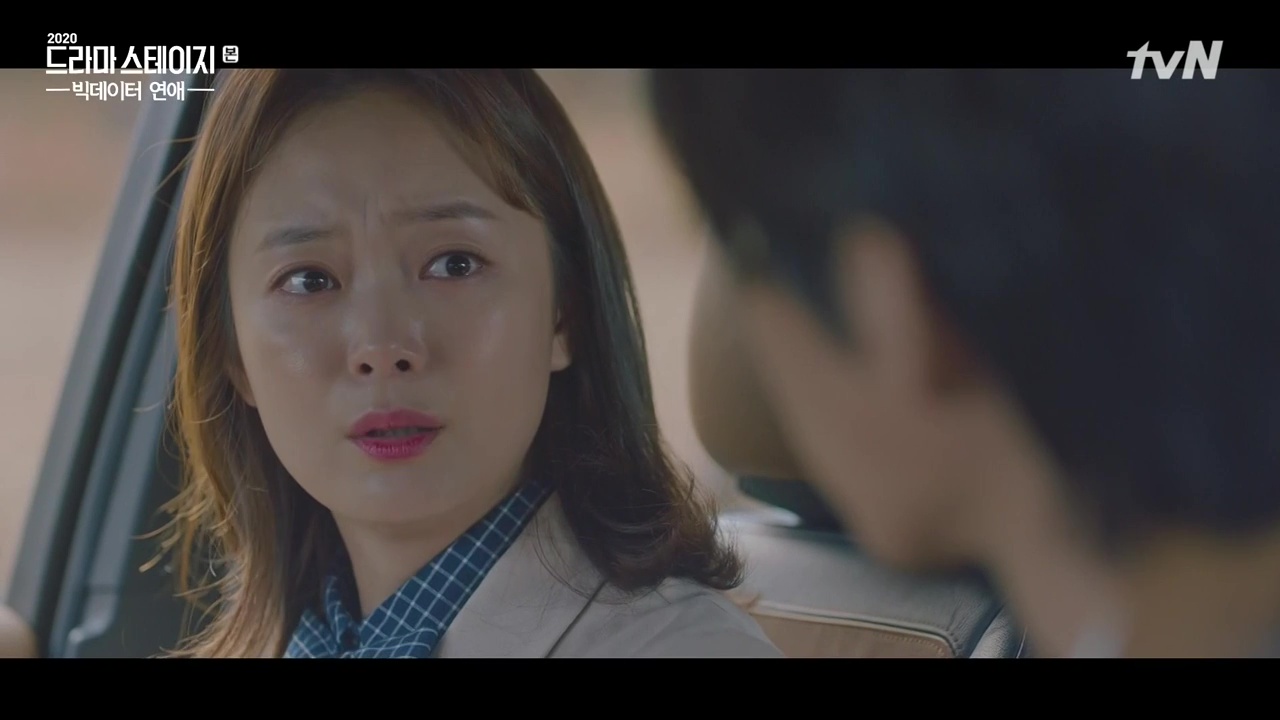 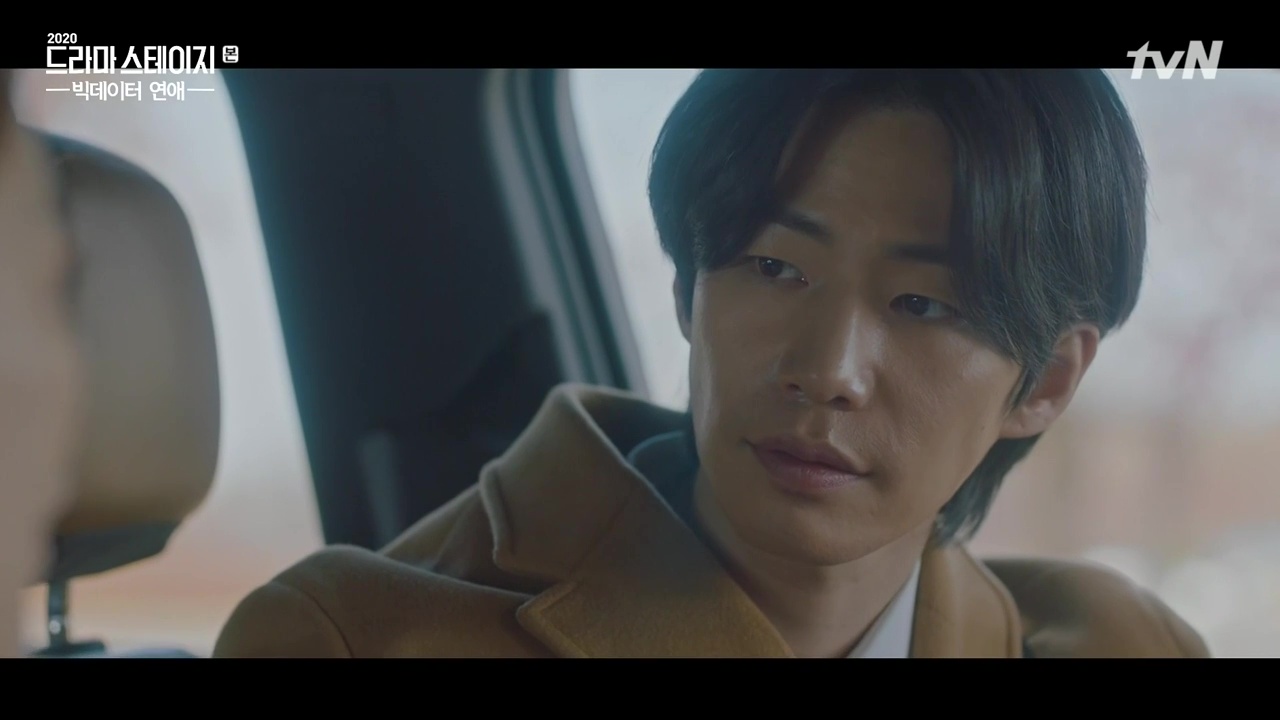 Seo-joon believes the strength of his app is that while humans might, “big data doesn’t lie.” Well, except when it does. Once they fix the bug in the app’s code, Seo-joon learns his true compatibility rate with Bit-na is a depressing 23%. But, to his credit, he’s already in too deep at this point, and beginning to learn that data isn’t enough to guarantee a lasting love.

We see this idea seconded, too, when Bit-na’s friend hits it off with a big data match on the first date. She says it’s like they’ve known each other forever and is over the moon — but a week later, it’s as if they’ve been married 50 years, and they’re already bored. The moral? They’re too alike. 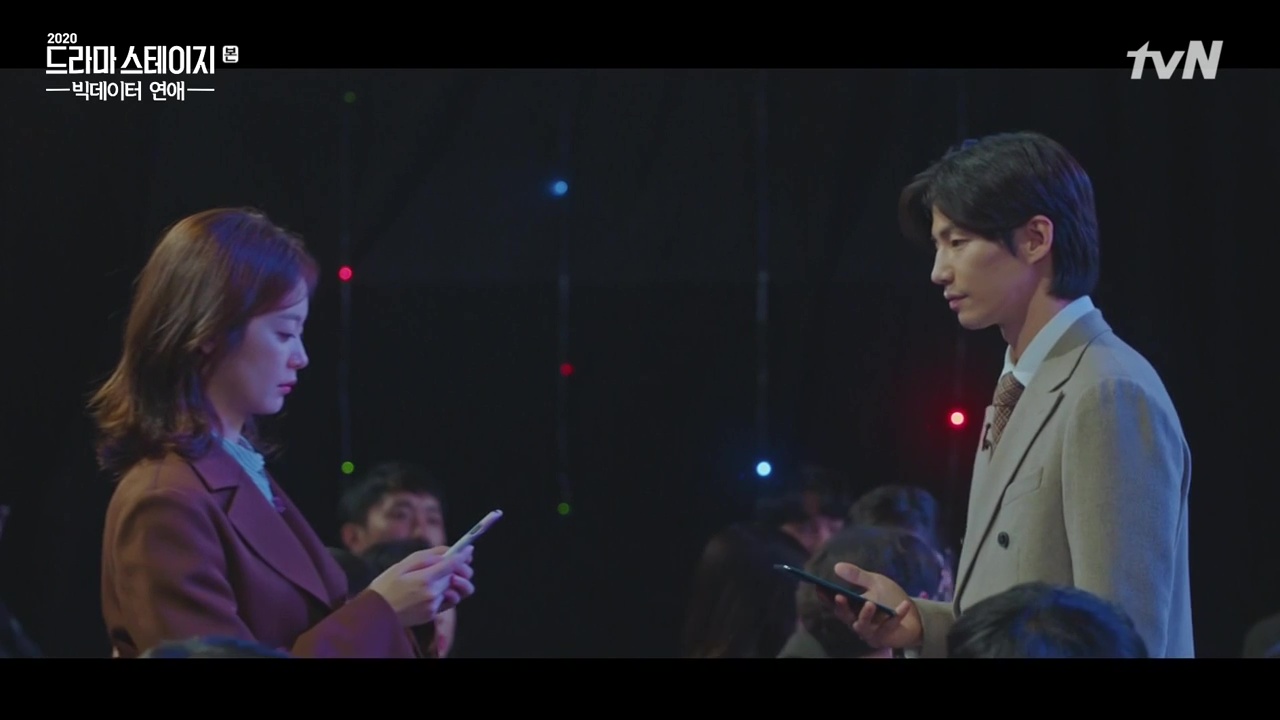 Differences make life, love, and relationships interesting. They also make dramas interesting, because the best parts of this drama were watching Seo-joon pretending to be into all of Bit-na’s things. Whether he’s crying over manhwa or pretending to understand basketball, he’s pretty entertaining.

But the best scene, hands down, was the two of them at a local gopchang restaurant. Seo-joon doesn’t know how to grill it, or how to handle the situation at all, but he flubs his way through. He’s got his phone out under the table and is reading off all sorts of data about intestines as they eat, his best line being, “Do you know the difference between large and small intestines? The large intestine is large, and the small intestine is small.” LOL. And his horror as he reads the details of various animals’ intestine lengths is pretty hysterical. 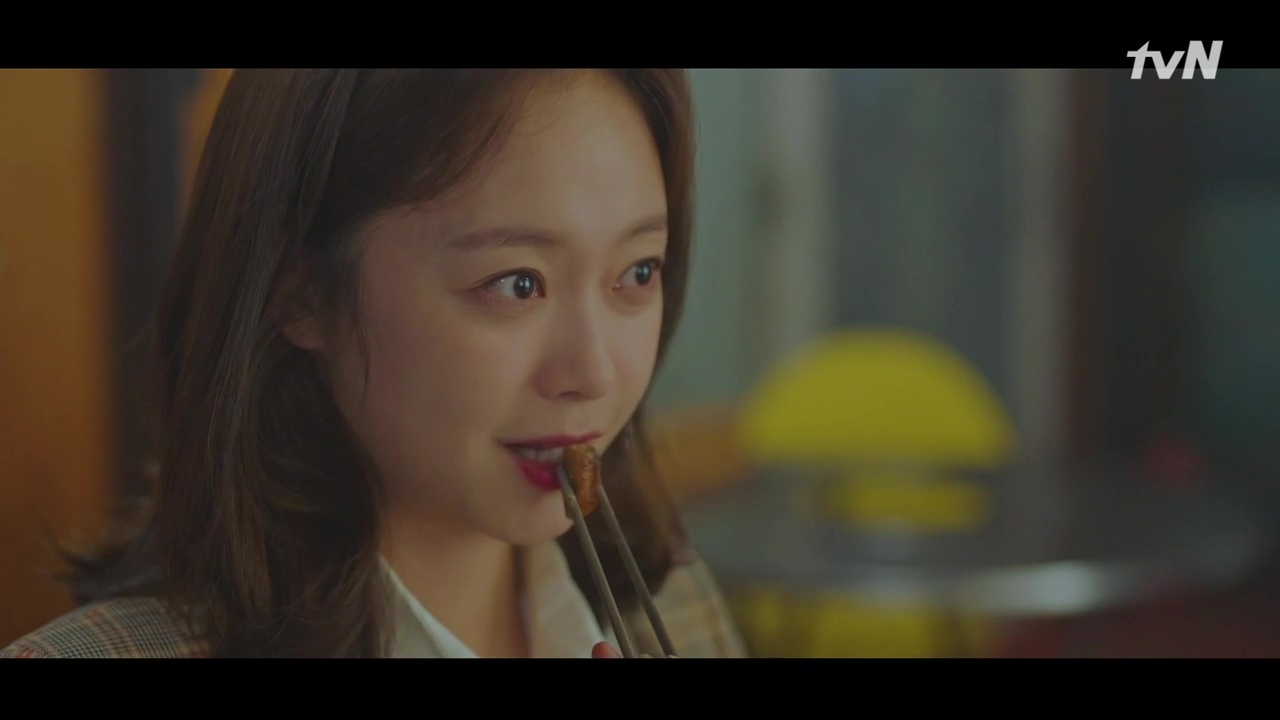 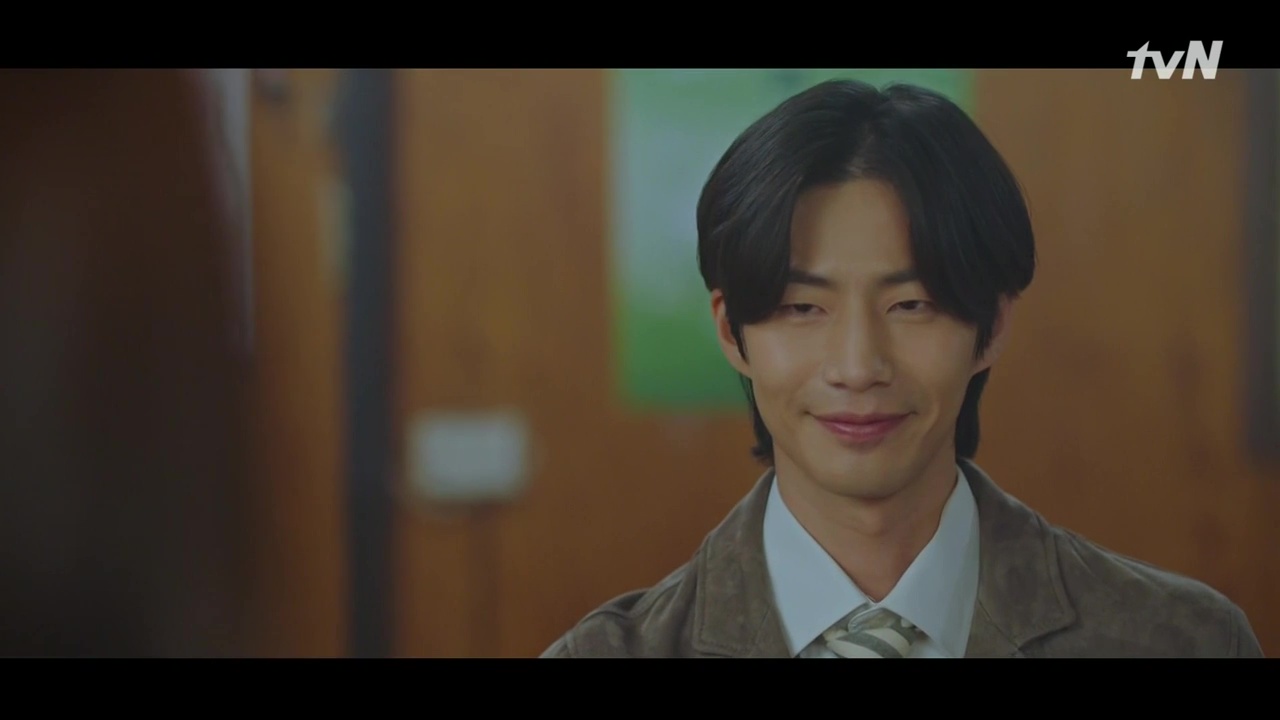 The drama goes all the typical places when Bit-na learns he was faking it all along, and of course, doesn’t believe him when he says he’s truly in love with her. These two not only have totally different tastes, but they think differently too. Seo-joon says to forget someone in your past you just “press delete and then empty your trash bin” (spoken like a true developer!), whereas Bit-na is hung up on hurt from the past and believes that it’s time that will help her heal. But what is it that will help these two, who actually make a great couple, come together despite the data that separates them?

This is where I wish Big Data Romance had done a better job. Instead of trusting their hearts and not caring what the data says, they let the data and the lies tear them (briefly) apart. It’s not until after a brush with the Truck of Doom and a bit of a time lapse that these two can reconcile. 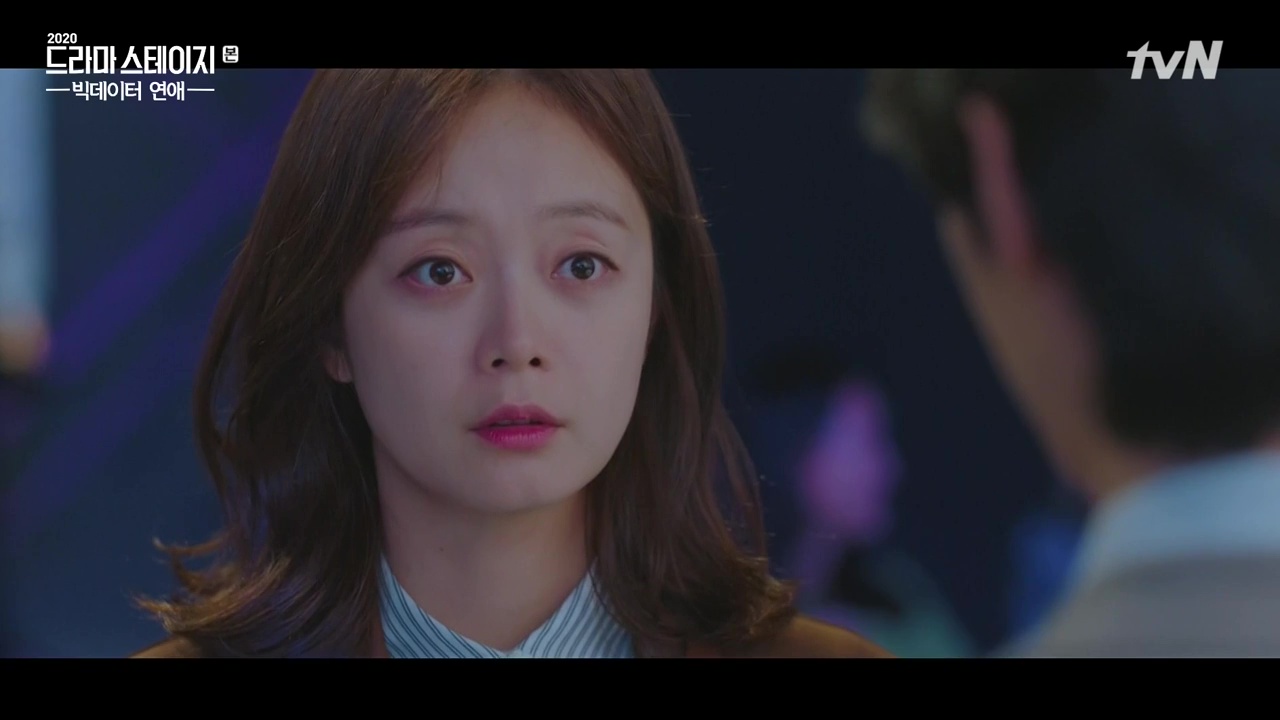 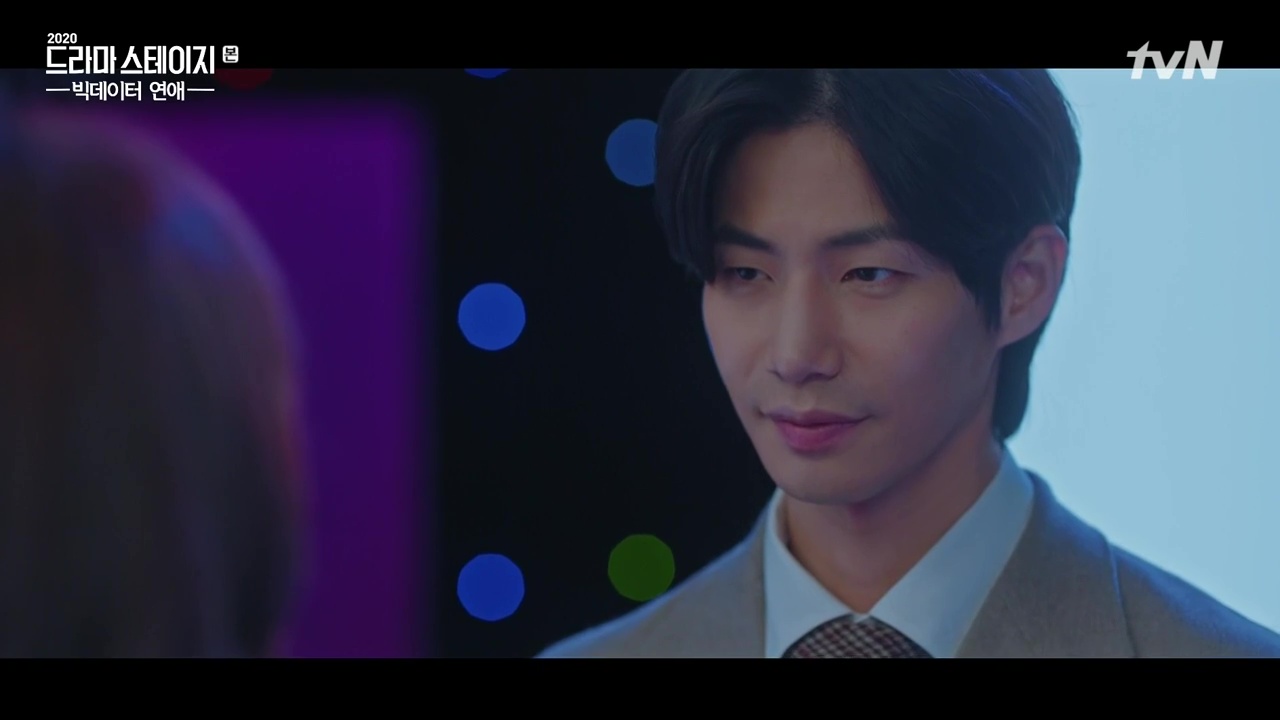 But they can’t reconcile without the app, too — and this is where our drama comes full circle. Seo-joon has learned that data ain’t enough. He has carefully built a heart rate monitor feature into the app. Now, instead of being a rather clinical, data-driven match-making tool, it assesses that data while taking into account the invisible attraction in the air between potential partners. The app is now beautifully accurate. Our leads test the new feature… and they’re told they’re a perfect match.

Our hero has learned that love is “a chemical reaction” and that data is just an auxiliary to that. While I don’t really know how much I like the perfected app and its ideology, the idea that differences keep life and love interesting is a nice one to see confirmed. Some push and pull is necessary, acknowledges our heroine — otherwise, you just have a stagnant relationship. Or drama. 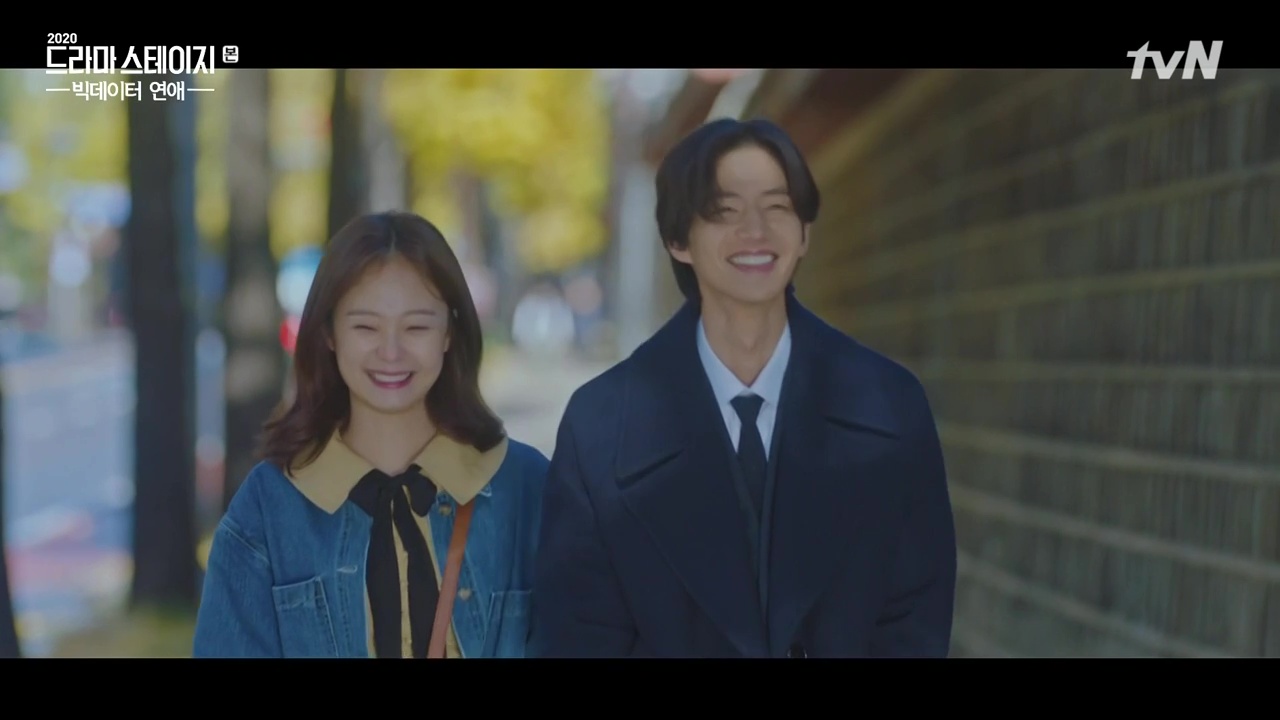 Awh, Jun So Min (the Viki name spelling). I haven't seen her since a brief cameo in Drinking Solo opposite her old '1% of something' co-star Ha Suk-jin.

Yeah she went through some mental health and health issues recently :(

She talked about her depression and her overall mental state. I hope she's in a better place now.

Sad to hear this and all the best to her! Really like her lovely and spunky portrayal in 1% of Something and Top Star Yoo Baek. I always think she could be the next Jang Nara.

She seems sweet. I have Top Star on my watchlist, and noticed some users here talking about this recently. Is it worth a watch/11 episodes too which is good?!

It's an easy and lovely watch with no villain or annoying characters - I like it a lot. Kim Ji-Suk as the lead is a plus.

Did anyone know where i can watch this drama?

This is when we wish we were fluent in Korean.

Anyone know where we can watch this drama with eng sub?

I can't find it. Wish someone would let us know where we can watch it.

can't find it either! :(
@missvictrix do you know where we can find this?

One hack of desperation is to watch raw and read the subs side by side. It's not exactly fun but it works.

i'm going to check this one out. I'm having a hard time picking up dramas after i binge watched the first 10 eps of A Piece of your mind then couldn't muster up the will to watch the last 2 eps or anything else after that.

Thank you for your review/recap of the drama special BIG DATA ROMANCE, @missvictrix. I've watched a couple of raw installments of tvN's DRAMA STAGE SEASON 3, and found them intriguing (i.e., Ep. 2: MY WIFE'S BED / REST IN PEACE MY WIFE; Ep. 4: MY UNCLE IS AUDREY HEPBURN), but I really need subtitles in order to comprehend exactly what's going on. I think I have a good shot at understanding BIG DATA ROMANCE thanks to your recap and commentary. Needless to say, I'm tickled at the prospect of seeing Song Jae-rim after his turns in I WANNA HEAR YOUR SONG and CLEAN WITH PASSION FOR NOW. I can picture him as a computer geek.

I have found the videos still awaiting subtitles and listed under the series title by season and episode # only, like so:
DRAMA STAGE SEASON 3 EPISODE 5

Note that AsianWiki's filmography for Song Jae-rim inconsistently lists the show as a TV movie under the title DRAMA STAGE: BIG DATA ROMANCE (without mentioning TvN).

DramaCo*l usually has the subbed Drama Stage seasons, but it takes a loooooong time.

This one isn't there yet. Don't ask me how I know.

Thanks for the review.

To those who wants to watch this drama...can go to d****cool and download the substitle from subscene... or you can watch it on JeonSominTadpoles fb page.. she share it there..