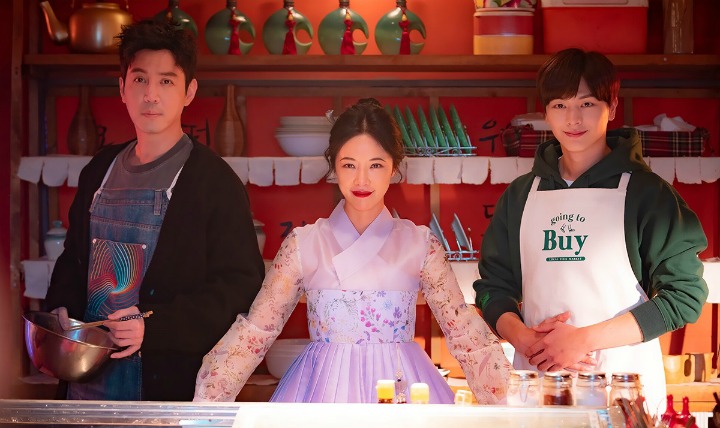 Yook Sung-jae (The Lonely Shining Goblin) just enlisted in the military this year (tearface). For all of us fans, he left a sweet in-character video message about his time at the Mystic Pop-Up Bar, his new fantasy drama.

In the video message, he describes a day in his life working at the Mystic Pop-up Bar. First, he says he starts the day with making 20 skewers of fishcakes. Sometimes when the owner auntie gives him the signal, he has to naturally brush up against a customer in order to read their inner concerns.

Thankfully, he can address these concerns, because they have a special drink that allows them to enter their customers’ dreams and help alleviate emotional scars and longstanding grudges. He ends the message by saying the most important thing is that their Mystic Pop-up Bar is open for business starting May 20 on JTBC.

In the drama, Yook Sung-jae starts off as a lowly customer service employee, and somehow is entranced into working for Hwang Jung-eum (Handsome Guy and Jung-eum) at the Mystic Pop-up Bar. In the recently released teaser, it’s revealed that Yook Sung-jae is a kid with an especially unique constitution.

The teaser begins with Hwang Jung-eum pouring Yook Sung-jae the special drink. The next scene shows him interacting with a customer at his day gig as a customer service rep. Then, Choi Won-young (Hyena) determines that Yook Sung-jae was born with an especially healthy constitution where he’s nearly immune from harm.

Possibly, that’s led to some difficulties in his life because in his voiceover, Yook Sung-jae asks whether Hwang Jung-eum can improve his constitution. Then we see him being chased by a horde of ajummas, presumably for some customer service concern.

As soon as he enters the Mystic Pop-up Bar, Yook Sung-jae is transported back to his supermarket workplace, where Hwang Jung-eum is dressed as an employee. She asks how he got there, and he has no clue how. It looks like he’s perfect to serve as the bait she needs to help her accomplish her goal of helping 100,000 people in one month so that her soul isn’t dissolved. She rejoices with Choi Won-young, bragging that she’s finally found her fly catcher, referring to Yook Sung-jae.

In the last scene, Yook Sung-jae meets Hwang Jung-eum across a bridge in the middle of the city. Appealing to her sense of pride, he says: “Auntie, I heard you were a skilled person who helps people with their wishes and grudges. I beg you, please save my life.”

Wednesday-Thursday JTBC drama Mystic Pop-up Bar, written by Ha Yoon-ah and directed by Jeon Chang-geun, will begin airing on May 20.

I like both Yook Sung-jae as well as Choi Won-young, so will definitely check this out!! I hope it has good comedy as well!!

I'm in. I hope this is wacky like Pegasus Market.

Sungjae-ya! 😢 I got so used to seeing him every week in Master in the House, now I won't get to see him except for this drama. Can't wait!

Thanks for explaining the teaser! I've been waiting for this drama because it looks really fun! =D

I've never seen any drama of Yook Sung-jae! Sad that he can't join in the promotion of this drama! Hope it'll be a success!

Here is a short promo for Goblin that he was in(along with Lee El). https://www.youtube.com/watch?v=IXfDyLkXv5g&list=PLQ_RBv_9DVc8V9gvEiaD-78NsQpB2fMLV&index=23&t=0s

This sounds kind of similar to XXXholic anime from CLAMP only that was more sinister.... I'll give it a try... Love supernatural comedies....

I've been waiting for this drama together with Jang Nara's Oh My Baby. Start of summer dramas line up are looking good!

Wow, this sounds GOOD. I've never heard of an MC "nearly immune from harm." because it's a given that an MC is ALWAYS in harm's way.

I just saw the first episode and it was a blast. It evokes different feels especially the issues presented. And the chemistry of the trio together are on point. Can't wait for the next episode.