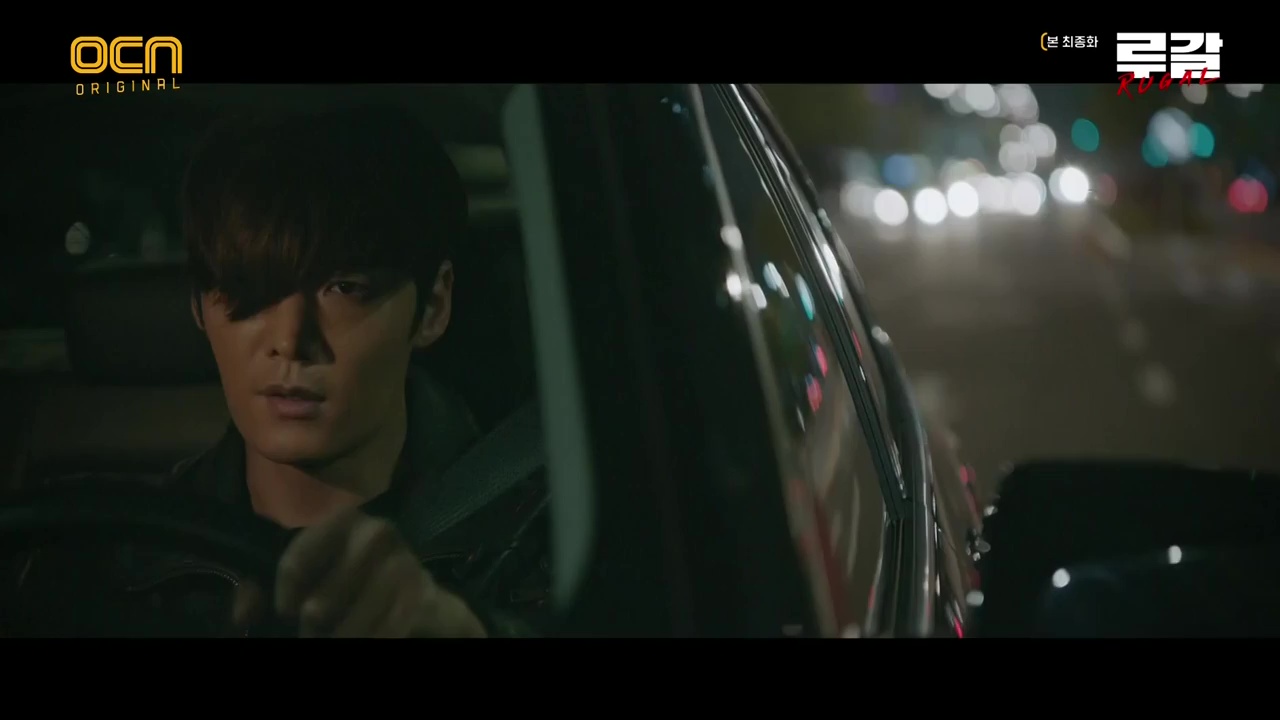 There’s no lack of fights, more fights, and cold hard truth in Rugal’s finale week. When our fighters come face to face with the truth about their pasts, their purpose, and their beloved leader, Rugal just might never be the same. 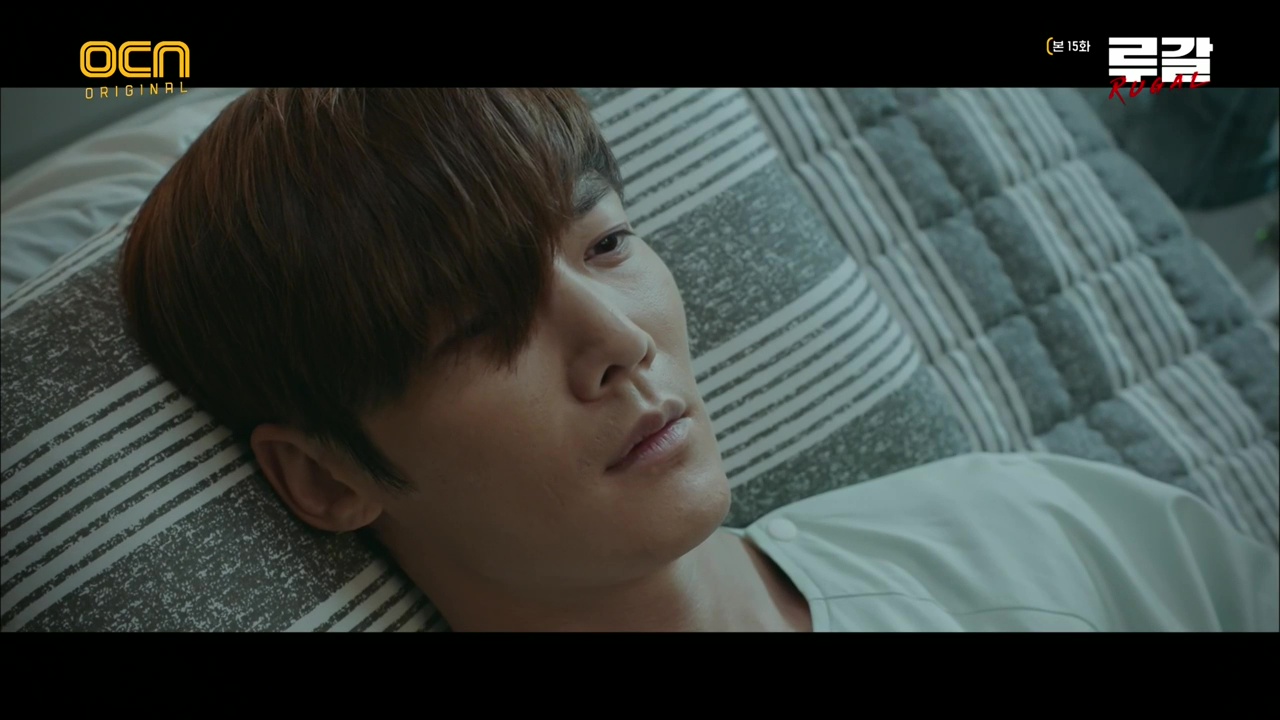 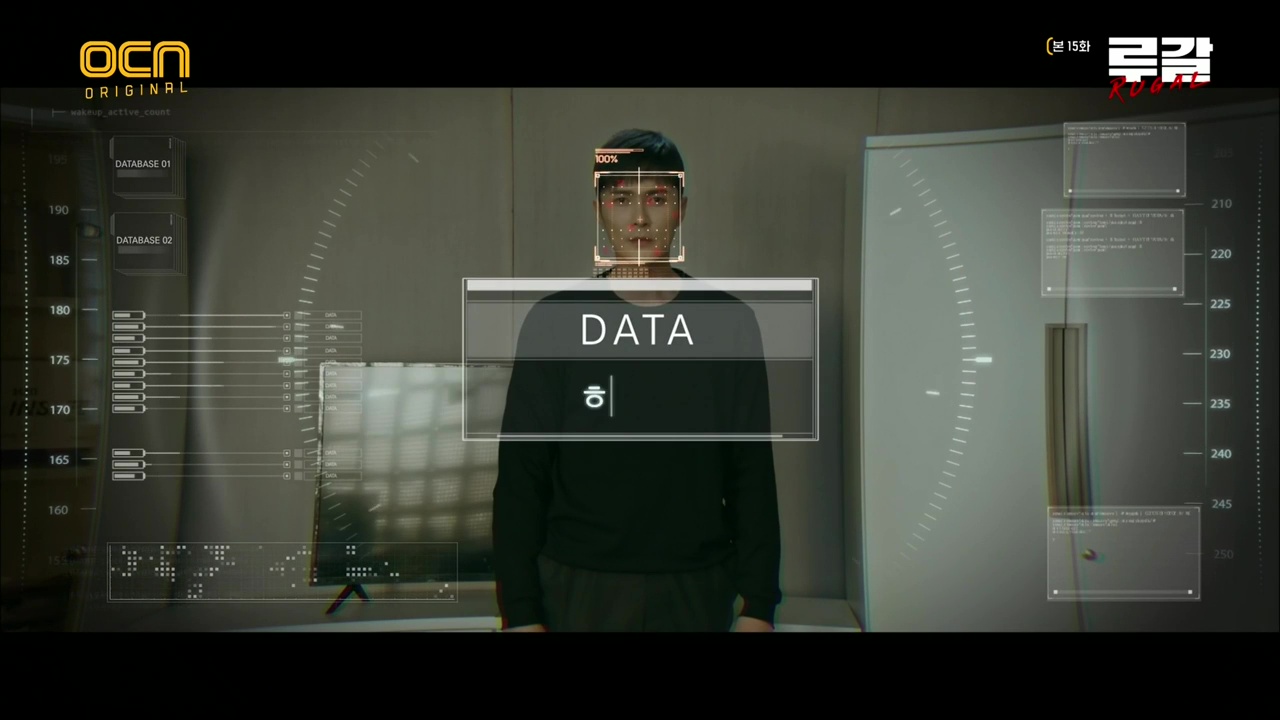 We left off with Ki-bum going berserk and ripping the chip out of his neck. He’s hoping to stop the AI takeover — and also to wipe out the memories of everything that’s happened to him, which he says is the only way he’s going to be able to survive (and I kinda feel the same way).

Both he and Mina are rushed into surgery at Rugal HQ, and are fine in no time, and ready for the final battle. Well, Ki-bum has some shocking amnesia after his chip replacement, but not to worry, his memory comes back rapidly. In a fight with Tae-woong, they spot Duk-gu’s zombie fighters, and something about their electrified veins sparks a memory for Ki-bum, and he’s back to his old self. 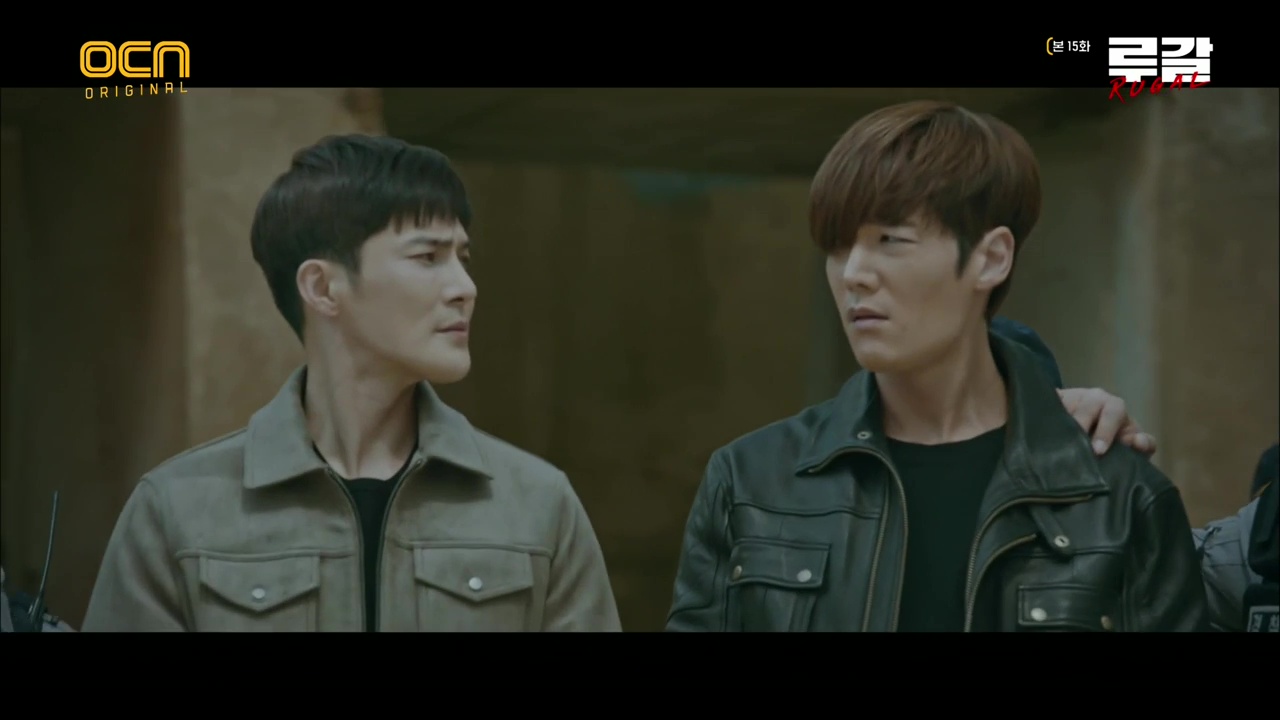 In fact, I’m not sure why he pulled out his chip to begin with. The AI is still in his eyes, and there’s no explanation at all about its whispering/advice/mad takeover. Also, getting his memory back means he remembers everything he had wanted to forget. So, we see him reliving all the pivotal moments of the drama thus far, from the murder that opened it, to his whole experience at Rugal, to the re-death of his wife. (This makes me think that perhaps this story would have been better told in the space of 90 minutes instead of sixteen hours, but that’s neither here nor there.)

The police invade Rugal for real this time, and Director Choi pops out and says he’s shutting down Rugal. Tae-woong and Ki-bum are arrested, and it serves as a good time for them to realize something is rotten in Rugal. Ki-bum accepts that even though Director Choi “saved” him, he also destroyed his life for the purposes of furthering Rugal.

This spawns a really cool moment, possibly the best of the finale, where Ki-bum suddenly has a eureka moment. He asks his buddy Tae-woong how sure he really is that their stories aren’t the same. Was Director Choi also behind the death of Tae-woong’s sister, and the arm dismemberment that necessitated his bionic surgery and induction into Rugal? Sounds an awful lot like what happened to Ki-bum, eh? 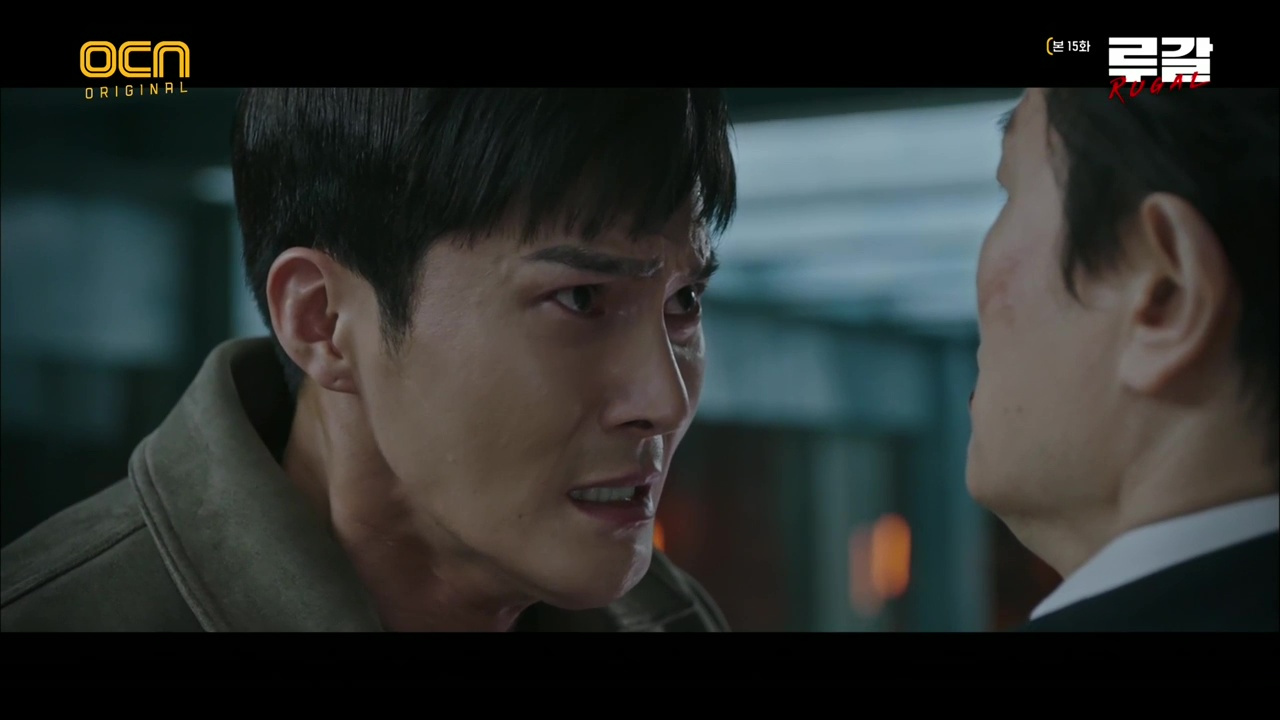 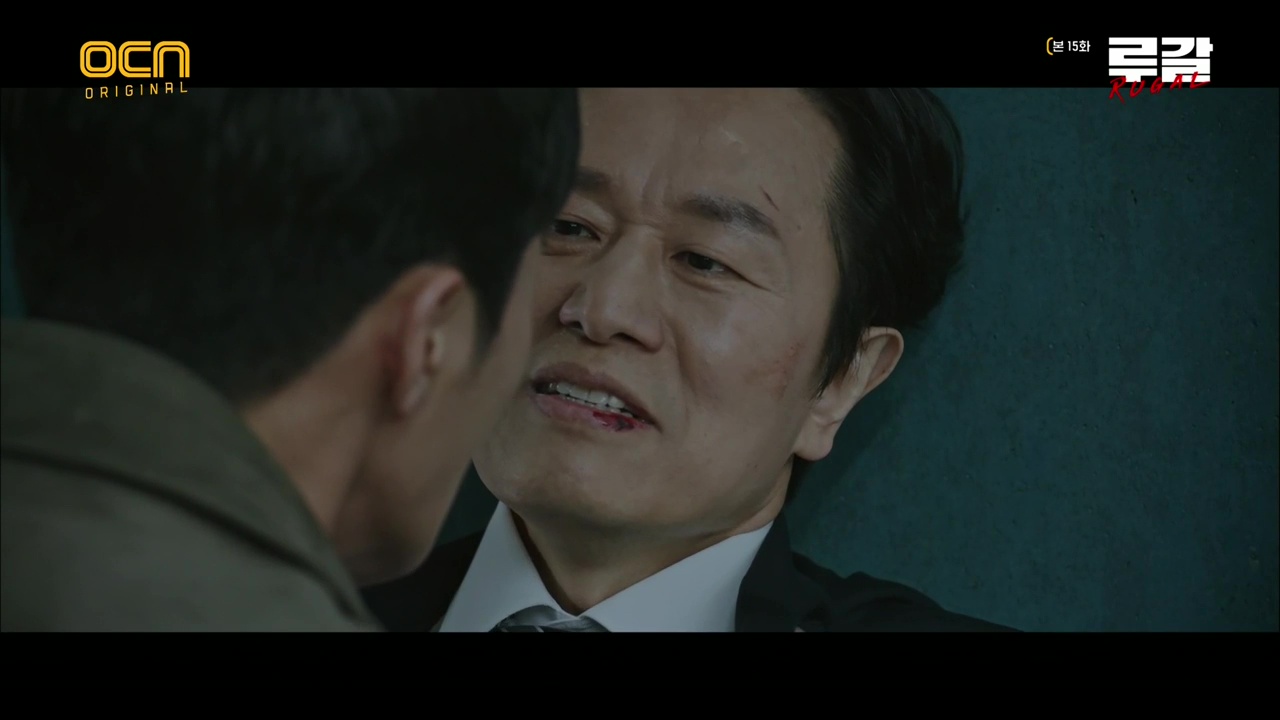 Welp, it’s true, and it turns out that Director Choi isn’t really much better than Duk-gu: both are obsessed with making human weapons (though by different means) to achieve their ends. Director Choi’s was the defeat of Argos, and Duk-gu’s was…. Well, actually I’m not sure. World domination?

It’s clear we’re heading to the climax of our plot because everyone’s getting beaten to a pulp. Mina saves Dr. Oh but is left half dead; Gwang-cheol gets captured and injected with Duk-gu’s bad guy juice, and is narrowly saved from the chemical by Ki-bum (but after they fight each other viciously, of course). Tae-woong and Ki-bum split up and each take on a baddie.

Tae-woong has a charged scene with Director Choi, and confronts him about the truth. The man shows zero remorse, and sends in some crazy swordsmen to attack Tae-woong (swords! Why didn’t they do that sooner?). Tae-woong is millimeters away from slaughtering Director Choi, but the scene ends with a rage scream instead; we know he’s a good guy and can’t kill his mentor like that. He leaves instead, to the sound of Director Choi shooting himself. 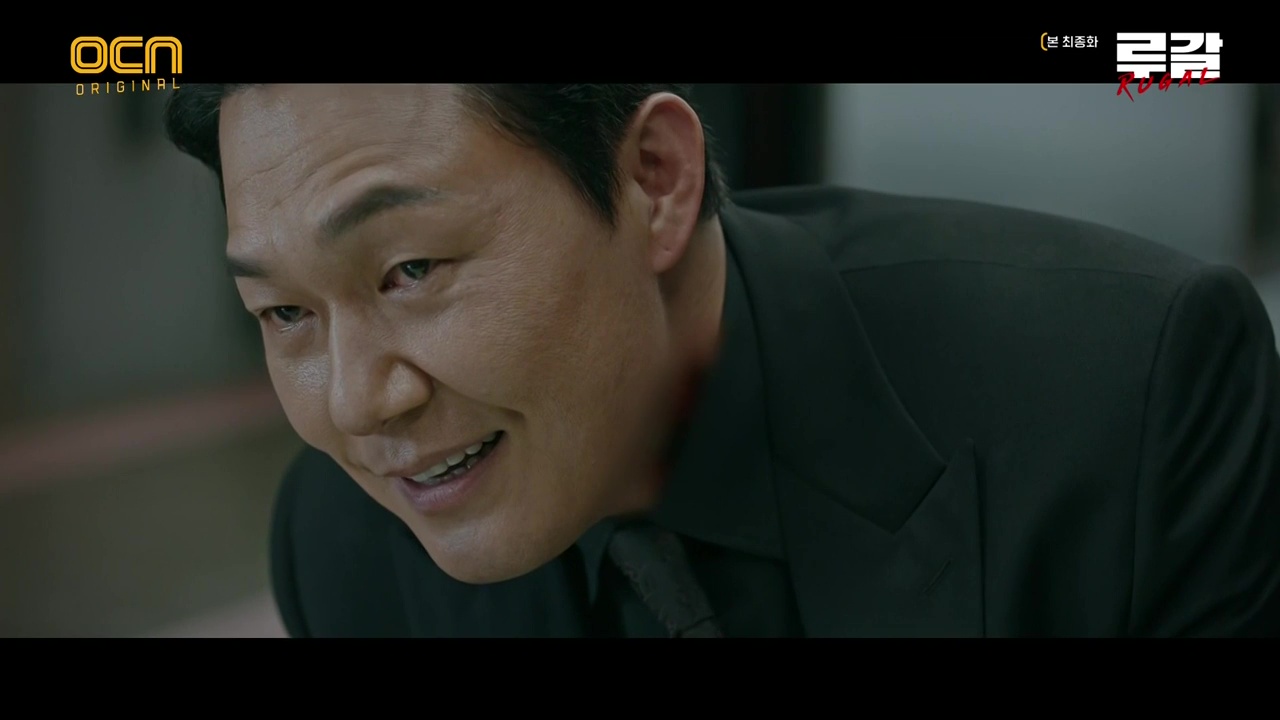 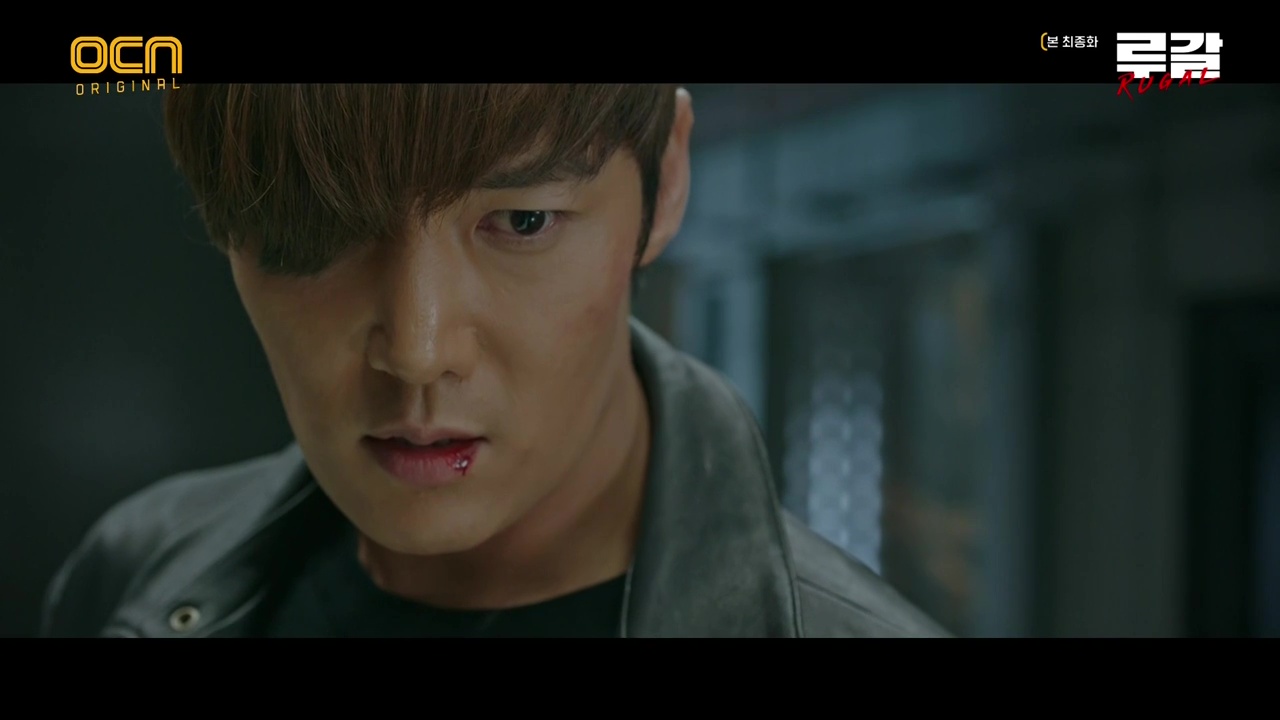 The final final showdown belongs to Ki-bum and Duk-gu, of course, and the two have their gazillionth fight scene, both intending it to be the last. No argument here. The fight drags on forever and ends with Duk-gu stabbed in the jugular. He was pumped up on his enhancement chemicals, but even that wasn’t enough to make him a worthy opponent of our hero.

Rugal is no more, but everyone still hangs out there, trying to understand what happened as the dust settles. Ki-bum says, “I’m relieved, but it doesn’t feel like it’s over.” And indeed, there are still a few things that have to happen before the drama can conclude. And by that I mean an onslaught of PPL, a multi-year time jump, and Duk-gu still breathing — in short, enough to hint that the story could continue (God forbid!). 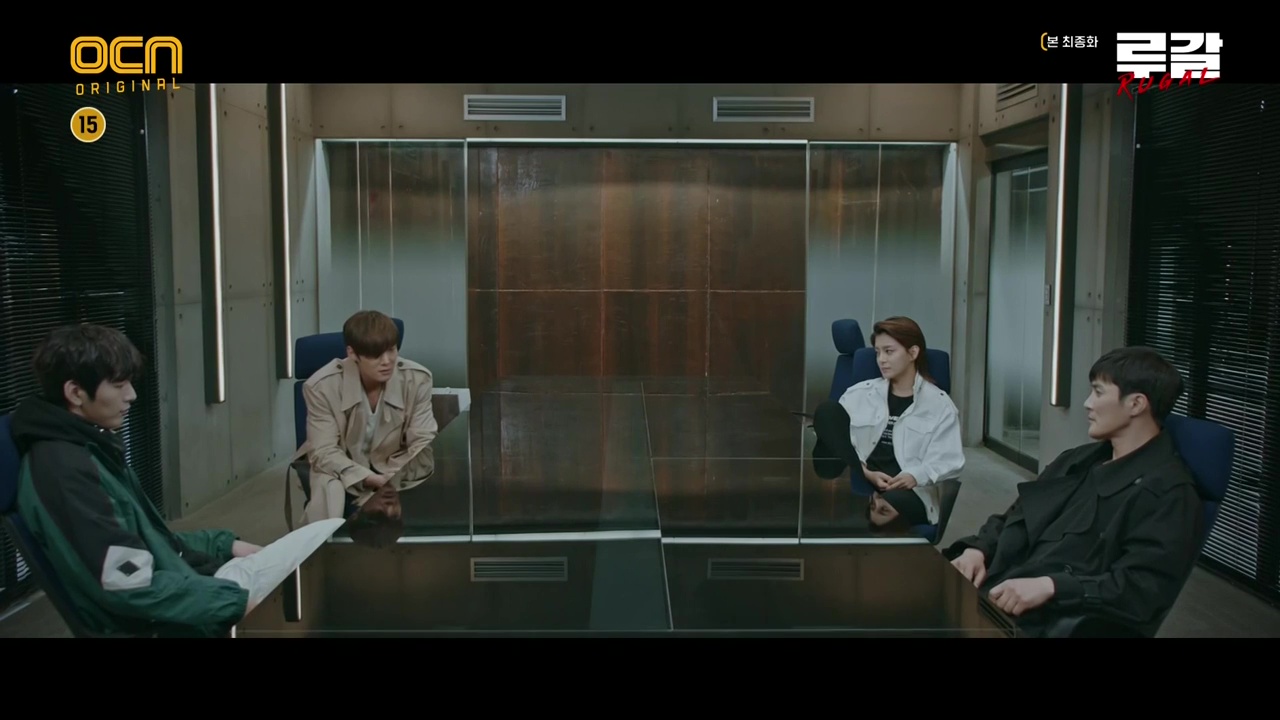 At last our Rugal fighters leave HQ, thinking of happier times, and then part ways. This makes no sense to me whatsoever, since they all have nothing but each other, are incredibly fond of each other, and are reliant on technology that only the four of them (plus Bradley and Dr. Oh) know about, since everyone else is dead (even Susan of fifteen lines).

We get a little vignette of what each of our fighters are doing years later. Mina is riding around on her motorcycle like a badass, Gwang-chul runs a moving company and employs Tae-woong and other ex-Argos people, and Ki-bum started a little security agency where he gets to be a cop still, but according to his own rules. 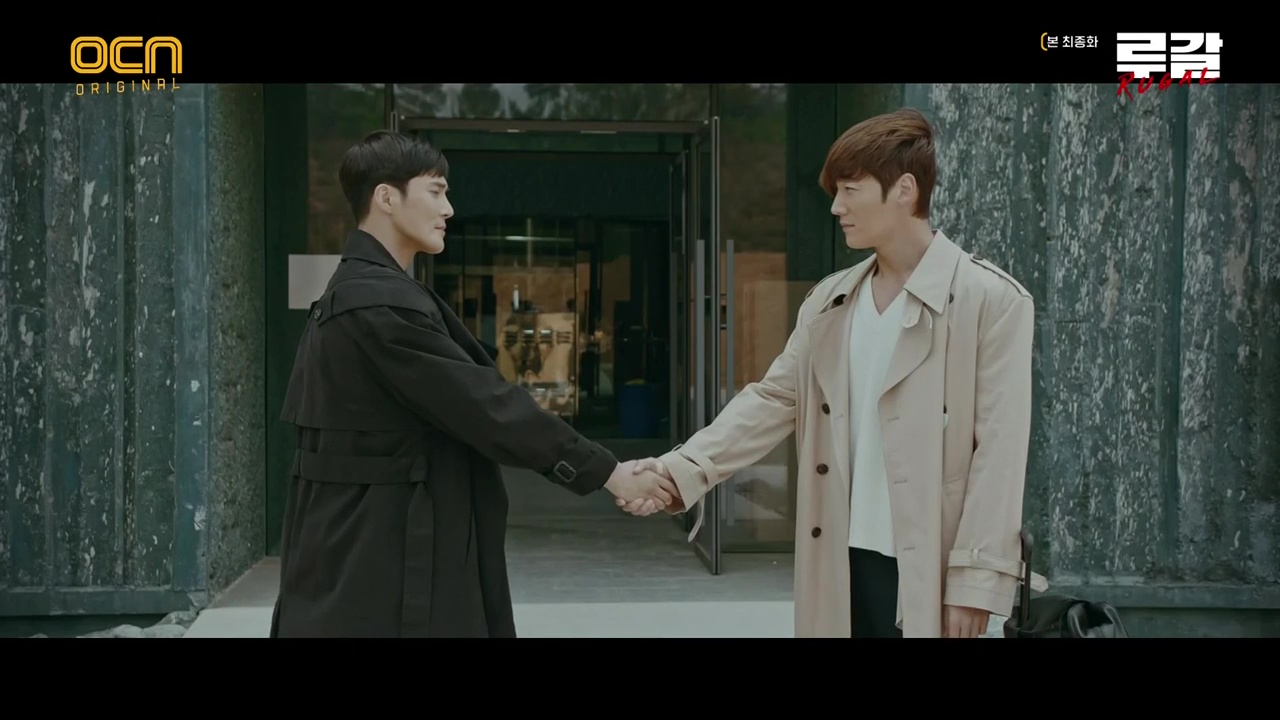 It’s a really poor ending, and pretty unsatisfying in every way I can think of — and I consider myself rather forgiving of endings that a lot of people don’t enjoy. But really, Rugal did not give themselves much to work with, so what can we really expect from their conclusion.

They brought in some nice twists and reversals in the final weeks, but then didn’t use them for anything, or flew through them so fast that there was no time for us to feel anything. If I’ve learned anything from sixteen hours of Rugal, it’s an all-new appreciation for what it takes to build a good character, and to make that character feel like a person and not a cardboard cut-out.

As usually happens when I’m disappointed by a drama, I start to think of elements, angles, and moments that had promise, and then think of what the drama could have been like if some worthy screenwriter had come in and chopped it to bits, took the best, burned the rest, and made something worth watching. It’s not as easy to do as we think, and we can thank Rugal for the reminder. 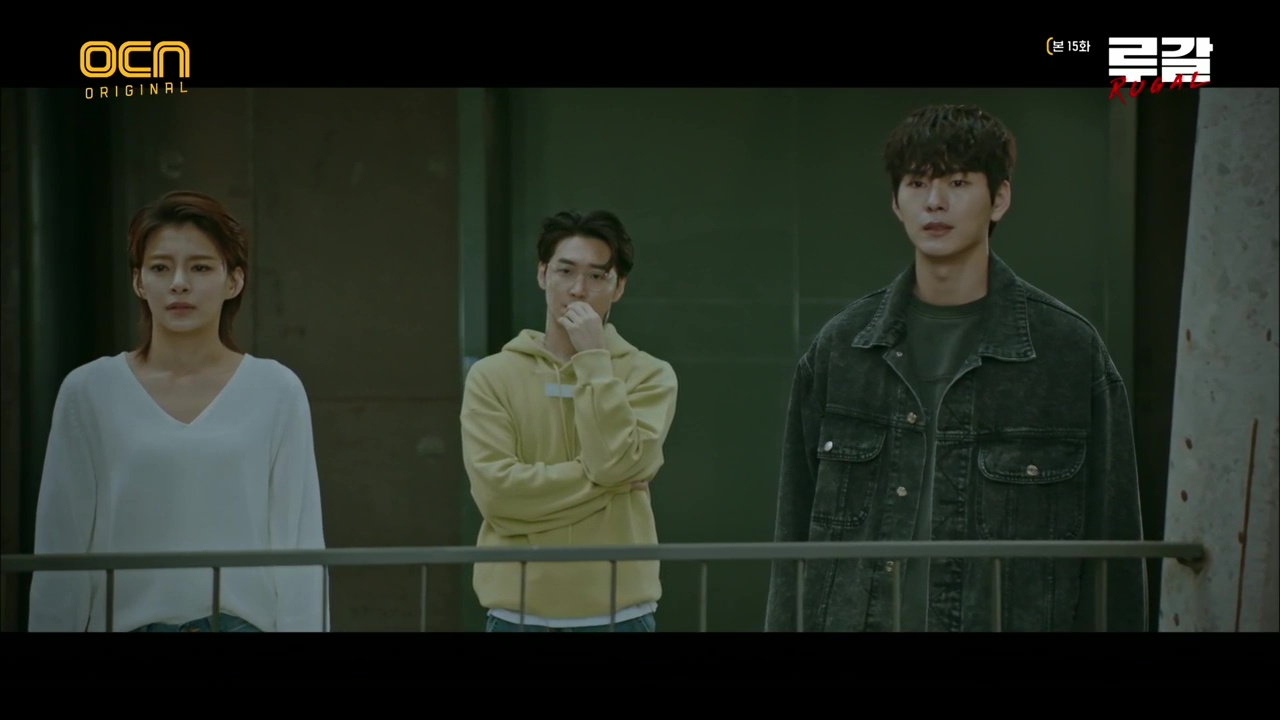 I am so glad I dropped this show but equally glad you kept watching it @missvictrix (sorry!). Thanks for the hilarious recaps.

Really disappointed with how this fizzled out. I was planning to binge it with When the Weather’s Nice, but at least that’s 16hrs less screen time for my eyes.

Unfortunately it took me three days to get through episode 15 and just finally gave up and read the weecap. Thank you @missvictrix for watching the last episode for us. You are a trooper!! Even I could not finish. This has so much potential and it fizzled quite early on. But I tried to be optimistic. Alas it was just not meant to be. Choi Jin Hyuk, please pick a better drama next time.

Does this make me the lone survivor? lol

I think so. I really tried, truly did. But just couldn't. Maybe next time. Thanks for hanging in there till the end. 🧡

Are you tired today? You only managed to make me laugh out loud once...
On to look for your other weecaps - what's next?
Poor Choi Jin hyuk, he hasn't had any good dramas lately (and that includes Last Princess where he got cheated). And his next role is some zombie thing.

I was wheezing with each line. @missvictrix my cheeks hurt so much from laughing. Did Ki Bum keep his emo hair after the time skip? Congrats for not abandoning this mess.

@yyishere I wish I could remember his final hairdo but it's already been blocked from my memory, mian mian~

Thank you @missvictrix for your efforts. I liked reading about this show I will never watch, I looked forward to it every week. My black mask I ordered on the internet at the beginning of your weecaps still hasn't arrived... I hope this is not foreshadowing that there will be a season 2 of this boring, confused mess. Wishing you luck on your next weecap project!

Oh, how I enjoyed reading this, @missvictrix. I would never have watched the drama, good or bad, but I literally stalked DB for the next episode of your weecaps each week. Thank you for making it such fun. Now, after a well-earned breather from the Memories of Rugal, could you take another one for the team soon, pretty please?

Brava @missvictrix, you made it through. I'm proud of you and hopefully you never have to weecap another drama this bad again.

You did it! Congratulation !

I'm surprised, it was based on a webcomic. It means the original story is so bad too? Or they really failed the adaptation?

Personaly, just their haircut already stopped to watch it :p

After Choi Jin Hyuk's transformation in The Last Empress, I didn't have the courage to try it.

The only thing I will say is the guy who plays Tae-woong is one hot ahjussi!!

I survived watching Rugal until the 16th episode (so much love and respect for my yeobo Choi Jin Hyuk) ♡ Since I am not really a fan of Sci-Fi dramas, I just did not expect too much and loved everything about Jin Hyuk's visuals instead :) I ended up liking Tae Wong's hotness and Gwang Cheol's cuteness too. The tragic love story of Ki Beom broke my heart and most of all, I hated Chief Choi in the last episode.

idk about y’all but the ending isn’t as bad as you guys complained. i mean i get it that they should been together since they’re always going to be rugal members but like they always wanna live their normal lives even tho they have artificial bodies ya know. the only thing i’m curios is who took the rugal chip but overall i really enjoyed the action drama

Thanks so much for sparing me.
I have been disappointed in bad endings too often, so now, I am willing to put up with some spoilers just to get an idea of everyone's comments about the end BEFORE I start.