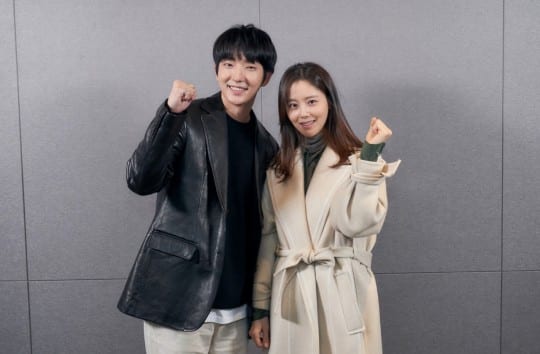 tvN’s upcoming Flower of Evil recently held their first script reading and stills have now been released. Lead actors, Lee Jun-ki (Lawless Attorney), Moon Chae-won (Mama Fairy and the Woodcutter), Jang Hee-jin (Babel), and Seo Hyun-woo (The Lies Within) were present at the reading along with members of the supporting cast and the production team.

The story is based around the question of what if you suddenly suspected your loving husband of 14 years to be a cold-blooded serial killer? And it follows the wife as she grapples with what is true, whether her husband’s love was just an act, and what to make of who he really is.

Lee Jun-ki plays the suspicious husband, Baek Hee-sung. As his wife eventually discovers, however, his name is not his birthname. He changed his name before he met his wife in order to conceal his terrible past.

Playing his wife is Moon Chae-won, whose character’s name is Cha Ji-won. Loving and charismatic, she works as a police detective in the violent crimes unit.

Jang Hee-jin takes on the role of Do Hae-soo, who has had a troubled and lonely life as the daughter of a serial murderer.

And Seo Hyun-woo plays a journalist named Kim Moo-jin. Although determined and persistent, he has a tendency to become blinded by his desire to catch the exclusives and breaking news stories of the day.

Supporting cast who were also present at the reading included Nam Ki-ae (I’ll Find You on a Beautiful Day), Choi Dae-hoon (Crash Landing on You), and Choi Byung-mo (Money Game) among others.

Writing for the drama is rookie writer, Yoo Jung-hee (Naked Fireman). And directing will be done by PD Kim Chul-gyu (Mother) who has an interesting filmography which includes On the Way to the Airport, My Beautiful Bride, and Hwang Jin-yi.

Flower of Evil is currently set to premiere in July and will be airing Wednesdays and Thursdays on tvN. 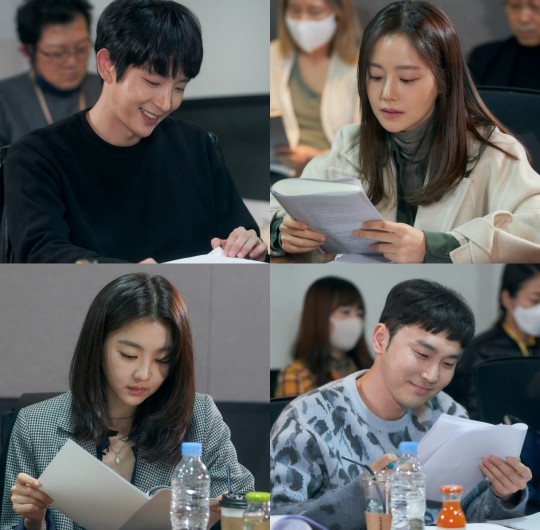 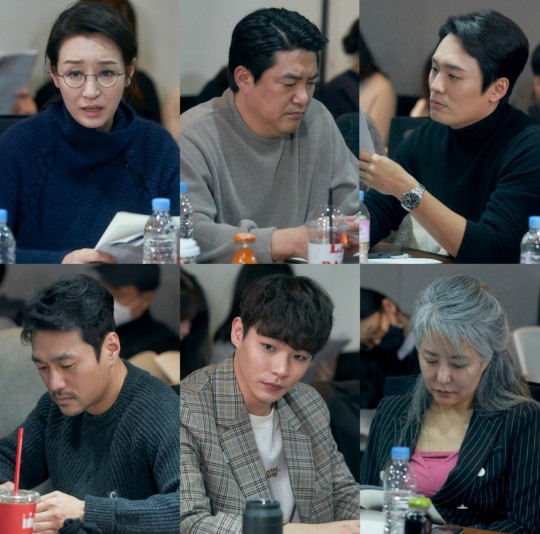 The 2nd woman in the first collage of photos looks a lot like the FL of cdrama Take My Brother Away & Dr Cutie, at least from this angle.

Here's to hoping Moon Chae Won gets a good script this time around, she was quite awful in Mama Fairy.

Guess it's time to move up Naked Fireman on my schedule. I was going to watch it for Lee Joon Hyuk anyway, now I have added incentive for LJK's drama's writer.

And she's reuniting with her beautiful handsome Vampire Scholar! I was on that ship. But I guess there's no chance in this show, what with her character being the daughter of someone he might have killed.

I'm oddly looking forward to this. Oddly just because while I like suspense it is not always my first choice, and I have a feeling I might end up shipping our heroine with her husband. Who might be a serial killer.
I mean that's wrong, right?

I'm just putting it out there now.

I am aboard that ship!

I'm worried about shipping them as well!

I haven't watched Naked Fireman. I should check it out.

This premise looks interesting and I like both leads! Both can depict the
conflicted and troubled personalities well. Too many interesting summer dramas coming up!

This sounds totally dark and delicious. I'd love to see an evil Lee Jun ki. 14 years...they probably have kids, too.

i read somewhere they will have a kid..

Yes they have a girl :) Early character description says he is very content being husband and father, and very comfortable with housework and childcare. He provide money to his family as a metal craftsman having his own studio. He is a man without greed being satisfied with what he haves.

Can they just make a drama of LJG doing housework and childcare... I'll watch it forever ❤️

I love PD Kim and the leads. I’ve missed them and I hope this will be much better than their last drama that I couldn’t finished.

I was so happy when news came out they could be working together again, but then I learned the drama's genre and my heart sank a bit. I do love these two, but after Criminal Minds...🤔🤔🤔

I like both the leads, I really hope this is good!! I think dark roles suits lee Jun-ki more, but let's see if he truly is the murderer or not?

so looking forward to Lee Jinki on our screens again. love his acting!

Looks like in Korea, the only dept. they have in the police force is Violent Crimes >.<

I hope I can enjoy this drama after half-heartedly watching Lee Jun Ki and Moon Chae Won in Criminal Minds. Please don't waste their chemistry for the second time ! 🙏🏻

Please drama Gods, please, be kind to them!

What a coincidence! I just finished re-watching Scarlet Heart again (I was in the mood for some self torture) and I was thinking how it's been a few years since I've seen Jun Ki's gorgeous face on screen and then I see this article!
Definitely looking forward to him being back!

Oooh! This premise sounds very interesting! Hoping for the best! By the way, is South Korea not under lockdown? How is it that dramas are still being made in this pandemic? Where I live, the entertainment industry has just stopped working for more than a month.

S.Korea is not under lockdown. They are the role model to the world on how to deal effectively with this pandemic.

That is amazing! It is so nice to hear that at least some countries are handling the pandemic responsibly. Such positive news is a welcome. Stay safe guys!

Love the leads and sounds so interesting!

This looks so promising. One of my favourite actor and actress is playing leads.

Cannot wait to see LJK playing a serial killer. He is such a great actor. I am sure he is gonna nail this role.Dark roles suit him more, but i love to see him smiling and being happy. The guy so far has played such lonely roles.

So wait... He is a serial killer who marries a cop.... Boy he likes to live on edge.. Huh? ... Definitely an interesting premise.... But will it top the con artist marrying a police offer??? From my fellow citizens??? Will be watching

Wait, so they're pitting the Husband and the wife against each other?? And Le Hubs is serial killer maybe? And not only that, said suspected serial killer is Lee Jun Ki, our tortured Wang So and able Scholar??? Sign me up!

Also, if not for anything, I'M MOST DEFINITELY HERE for the Pd of OTWTTA and Mother.
I'm also here for Jang Hee Jin. I love that woman, she's so hauntingly beautiful!!!

The husband and wife part reminds me of Blacklist. It’s been a long time since I watched Moon Chae Won and Lee Jun Ki so I might give this a chance.