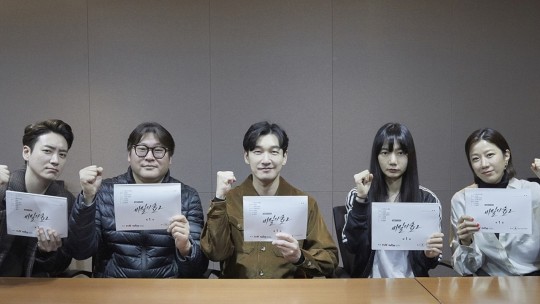 tvN’s upcoming Forest of Secrets 2 is well underway and stills have now been released featuring the new season’s first script reading, which took place this past January.

The cast is a mix of old and new with lead actors Jo Seung-woo (Life) and Bae Doo-na (Kingdom 2) both returning to headline the new season.

The story in season two continues on from the first. The lonely prosecutor Jo Seung-woo and warm-hearted police officer Bae Doo-na team up again to investigate a mysterious case and uncover hidden truths.

Also reprising their original roles are rival prosecutor Lee Jun-hyuk (365: Repeat the Year) as well as Yoon Se-ah (Melting Me Softly), who was the wife of the previous chief prosecutor. For season 2, she’s now the owner of her father’s company.

The new additions to the main cast are welcome faces: Chief officer Jeon Hye-jin (Search Query: WWW) and Choi Moo-sung (Nokdu Flower), who plays a top figure in the prosecution team. Through their characters, the story will highlight the existing conflicts between prosecutors and the police force, as well as the question of which responsibilities fall under which jurisdiction.

Directing for the drama is PD Park Hyun-seok (Dance Sports Girls) who replaces season one’s director, Ahn Gil-ho. But the original writer Lee Soo-yeon will be penning the scripts for season two.

tvN drama Forest of Secrets 2 is currently being planned to premiere in August and will broadcast on weekends, following It’s Okay to Not Be Okay. 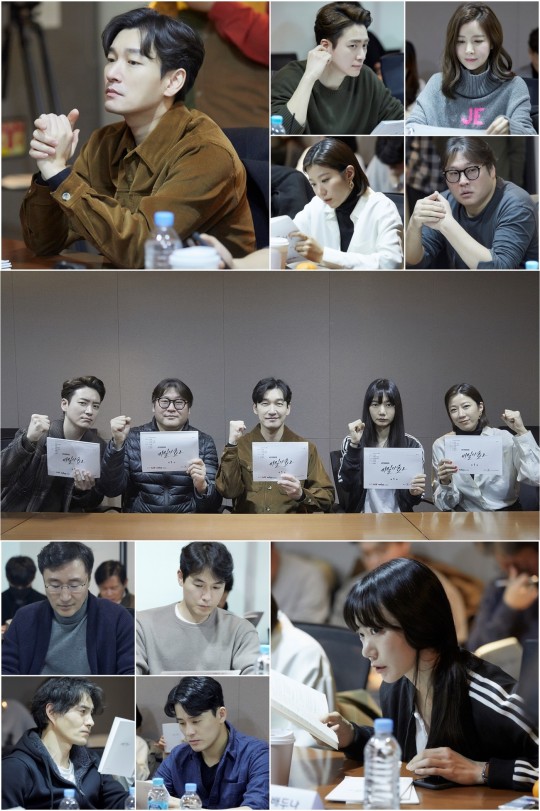 I'm so freaky excited. As long as the two leads are back and writer is the same, this should be as great as the first season.

It's good to see Lee Sun Kyun's wife in the cast. I hope he'll make a cameo.

What a shame that we won't have YJM, SHS and LKH who are part of the pillars in S1 but that cannot be helped.

I am nonetheless excited to see Jeon Hye-jin (who's excellent in everything I've seen her) and Choi Moo-sung of whom I have been a fan since I Live in Cheongdam-Dong.

Anticipating this so much even more when almost all the cast reunited,hope the writing will be of the same high quality as the first!!!

For a long time, I thought it would never happen. I should re-watch the first season :)

I intend to do that too!

Wait, I think there's a typo? Yoon Se-ah's character was the wife of the previous chief prosecutor, not Lee Jun-huyk's character's wife.

I think you misunderstand the sentence..

There is a conjunction AS WELL AS there..

That's the edited sentence to clarify this detail! :)

I see..
Sorry for my above comment then :)
Peace..

that's ok!!! :) It took me a few moments to make sure I was reading the original sentence right too.

Somebody help me to manage my expectations. Please please.

After Life and the first season of Forest of Secrets, it's impossible to lower my expectation. Please bring on your best capability, Lee Soo-yeon writer-nim.

I'm nervous about the change in director. I loved Dance Sports Girl, but it had a very different tone from FoS. The first FoS was perfection and I hate to see anything throw off that magical combo.

I don't trust the PD. I don't know any of his works. I wish they brought back the old one 😭

He's the director of Just Dance, which is a perfect gem of a drama.
I know this is a very different type of story but I'm sure he can do a fantastic work. His directing in Just Dance with so many young actors was great.

Let's not expect it to surpass the first season. It was just too good. Even the writer couldn't pull the same success with Life. I hope it would still be as good as the 1st one though with a tight plot at least.

lol, I like this approach. Best to temper your expectations.

Great news and great additions to the cast.
‘Safari’ himself Choi Moo-sung is coming onboard. He gave a memorable performance in NOKDU FLOWER.
Jeon Hye-Jin was terrific as Kevin Lee’s wife Eun-joo in MISTY.
I am also pleased that there will be no availability angst since this drama has been picked up by Netflix under the title: STRANGER: SEASON 2.

I am sorry but it just struck me. In the header pic, that maybe the only time we see Jo Seung-woo smiling. Better enjoy it now.

I wonder which way Choi Moo-sung will swing: good or evil? He was a pretty convincing bad guy in Lookout. And not over the top with the evil laughs or other bad guy schtick.

Omg, Jeon Hye-jin is in this?!

This drama was already a must-watch, but I'm excited to see her again after her awesome performance in Search: WWW. ♥

I have had zero interest in the promos for It’s Okay to Not Be Okay so far, but I suddenly find myself deeply curious about the show times and airing dates for that show!

But I'm also trying hard to keep my expectations in check! Second seasons are never as good as first seasons, are they? Also, the director is different. But the writer is the same.
*staying calm*
*keeping fingers crossed*

Looking up It's ok to not be ok airing dates was also the first thing I did! hehehe But I failed in that since there isn't an episode count I could find. lol

Feel like plain shit just want Changjoon and Eunsoo back

I'm super keen for this in general though!!

Lol you're so hilarious I'm crying

Me, armed with a shovel: Dead characters? Not on my watch!

Soon, we'll be comparing this 2nd season with the previous one and it'll be long discussion. It's okay just don't forget to count me in. Maybe need to rewatch to reminisce how well done FoS 1 been made. Anyway I'm soooooooo excited just like everyone else here.

I was worried that there was a change in PD but Dance Sports Girls/Just Dance was well directed as far as I can remember. Those shots of the main lead dancing was beautifully done.

Though half of my fave casts are not appearing, but soooo excited for Jeon Hye-jin! I wonder which side she'll be on. But with this writer, it'll probably be awhile to know exactly.

Just Dance was really good and the direction was innovative. It did have a strange palette but quite a few dramas were experimenting with that at the time. And it worked with Just Dance. It's a very underrated drama.

I remember the directing had that nostalgic sort of aura, maybe it had to do with the palette. It was a little gem.

Should probably get around to watching the first one at some point eh...

Uuuuuuuuuuh switching PDs... I dunno about that T___T. Even if the Dance Girls PD is a great one, I've been burned by Mystery Queen. I'm wary of a different writer/PD combo not catching what made the first one click.

(For context: Mystery Queen had the same writer for S1 and S2. But S2 switched to the PD from Chief Kim--which I assumed would be great since Chief Kim was hilarious and awesome, but the S2 combination just came out weird.)

Welcone to Waikiki 2, Mystery Queen 2, Vampire Prosecutor 2. I think there's a reason why Korean TV doesn't do much multi-season programming.

I also felt a bit.. insecure if that's the right word reading that it'll be the new PD..

I'm worried about this too because MQ2 broke my heart. But I'm praying.

MQ2? I thought we all agreed that there was only MQ.

Yes @mary! If Lee Joon-hyuk (1984) did not return as (like you said) that weasel Prosecutor Seo Dong-jae it would be a real bummer. I enjoyed LJH in casual clothes in 365: REPEAT THE YEAR. It is back in suits for him.

The chance this is going to be behind a pay wall I don't have a subscription for is pretty high.

It's going to be on Netflix.

We need a Beanie-rewatch in July or something to PREPARE for the new season.

*throws confetti in the air*

my gosh, I cannot wait! I have always considered this drama such a game-changer in the way I view Korean dramas in recent years that besides the common tropey rom-coms that I used to love so much, there are real gems that will dig into your mind and have you waiting on the edge of your seat week after week. I'm so unbelievably excited for this~

Oh my! I just went and read the article on db about the news that the studios are tentatively considering season 2 for both Signal and Forest of Secret, checked the date and saw that it was published IN 2017!!!!!!! WHAT?!!!
How did the year(s) run so fast?? How is time speeding so so so...*deep breaths*...

On a more serious note, I'll need to hurry and watch Forest of Secret in order to catch up with the second season.

Yes. you should first watch S1. It was amazing

YAYYYYYYYY!!!!!!! OMG ! I was waiting for this for so long. Definitely excited for S2. I just hope all of that elements in S1 will be seen in S2.

AAAAAAAHHHHHHH!!!
I can't wait hopefully I'll be able to watch it as it airs.
*tries to temper expectations and fails*

YAAAAAYYYYYY!!!!!!! Last time I was this exited was the release date announcement of Avengers Endgame. Can't wait!!

Goddamn, I am so excited for this.