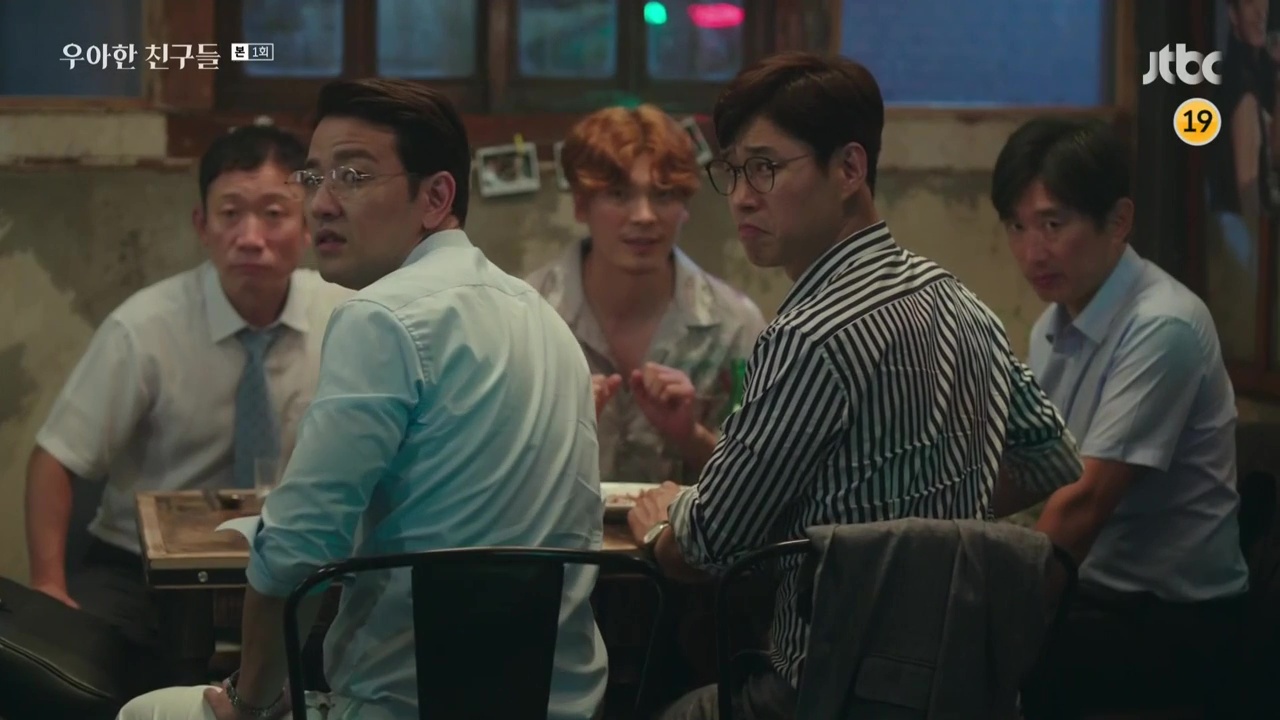 As expected for a tangled story and ensemble cast, we get a lot of introductions in our opening week — strategic glimpses of our graceful friends, their wives, their workdays, and most importantly, the dynamics of their friendship. I came into this drama expecting high-style suspense, but Graceful Friends is more intrigue than suspense, and certainly more relationship-driven than I was expecting. It’s a bit heavy, but I’m not complaining. On the contrary: I’m hooked. 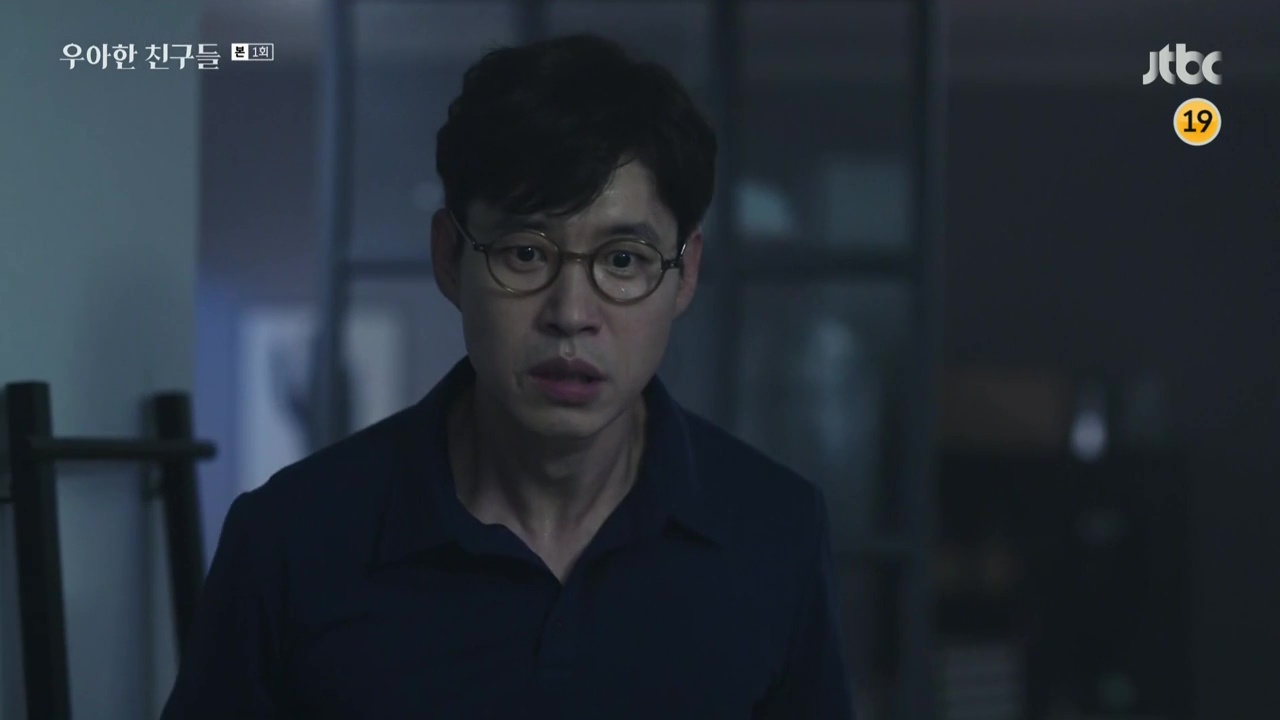 We’ve been told Graceful Friends is something of a murder mystery, so when we open our drama at the scene of a murder, it’s effective to jumpstart the plot, and also to introduce us to our main players. Our ajusshis are a group of friends that have stayed close since college. But while their relationships look ordinary from the outside, there’s actually a bottomless well of intrigue around each character. The storytelling is tight and dense, so while there’s a lot to take in (especially during all the early exposition), it’s also pretty compelling.

The man at the scene of the crime is our lead, AHN GOONG-CHUL (Yoo Joon-sang). He’s clearly committing a crime of passion, but we don’t learn much more than that. It a rough scene to begin a drama with, but it’s tempered with cuts of his friends talking to investigators about what a kind person he is, and how he would never be capable of murder. And true enough, the Goong-chul we meet this week is all dimples and heart. He’s a devoted husband to psychiatrist NAM JUNG-HAE (Song Yoon-ah)… but perhaps too devoted? They seem like a happy and compatible couple, but nothing is as it looks on the surface — this drama makes sure we realize that right away. 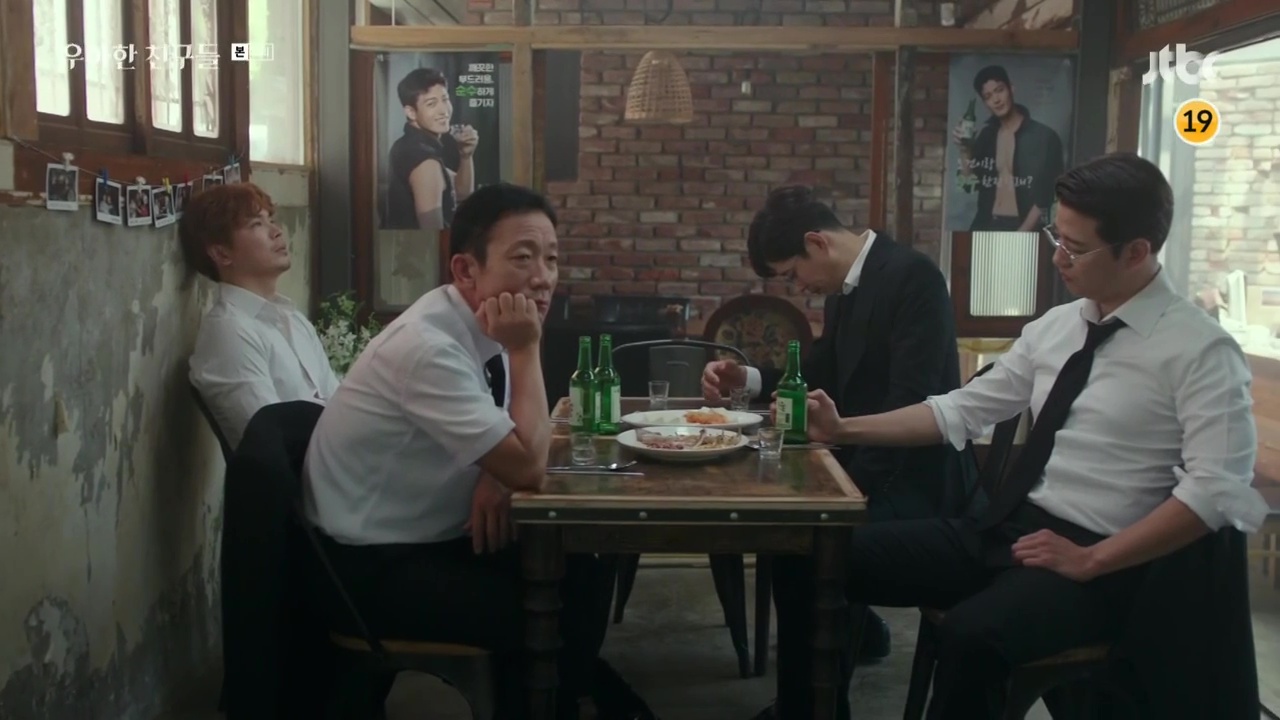 Goong-chul’s buddies and their stories are also introduced to us. There’s JUNG JAE-HOON (Bae Soo-bin), a divorced urologist who seems to be secretly (or not to secretly?) in love with Jung-hae. Then there’s JO HYUNG-WOO (Kim Sung-oh), an adult film director married to a wealthy wife that adores him that he feels stifled by (or at least says so). PARK CHUN-BOK (Jung Suk-yong) might be married to a young wife, but he’s not only having problems in the bedroom, but working himself to the bone to keep food on the table. Finally, we have CHUN MAN-SHIK (Kim Won-hae) who’s treated like dirt at work, and doesn’t seem very happy with his wife, who’s incidentally seeing Jung-hae for her depression.

If you’re a little overwhelmed by all these characters, you’re not alone — there are a lot of players, and their roles might be more convoluted than we’re led to believe at first. Because as we get deeper into the story, that very factual introduction of the characters and their situations that I ran through above seems somewhat false. There’s so much more going on than meets the eye, and we’ve only just scratched the surface. And the drama is not just in our present day, either — there’s also a much talked about incident in the past (20 years ago) that will have an important part to play. 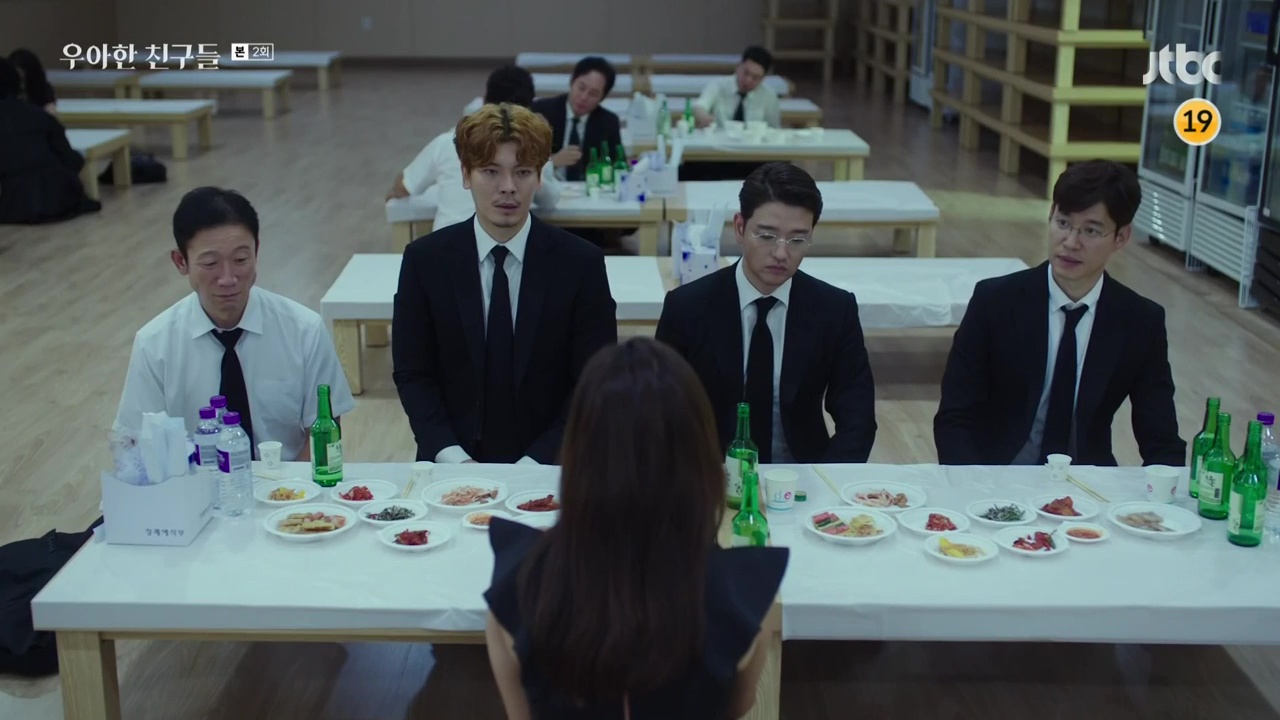 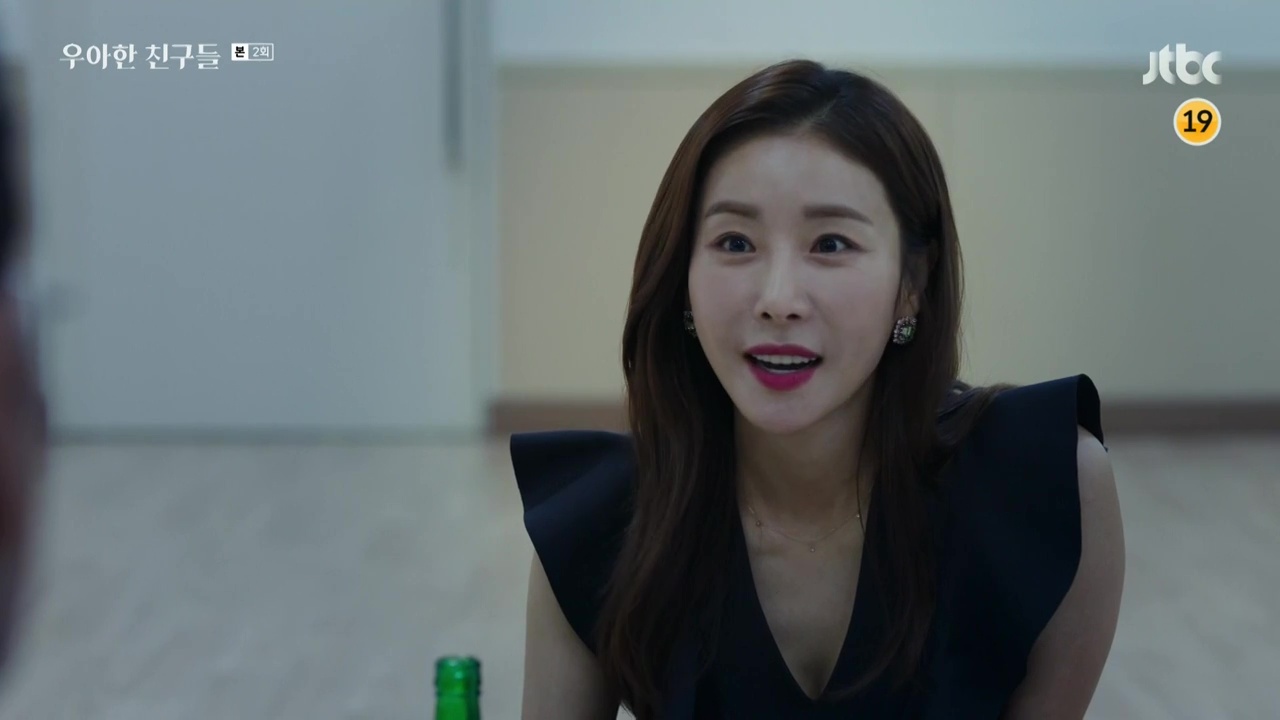 We might open our drama with a jarring murder scene, but it’s the sudden death of Man-shik that actually acts as the catalyst to really start our plot moving. His death hits our ajusshi friends hard, each one grieving in his own way. But it also sets off a chain reaction of events that are set to make some serious waves in our characters’ lives: an unknown woman appears at his funeral and is inconsolable; Man-shik had just sold off all of his life insurance policies and the money disappeared; there is a string of messages between him and Jung-hae; and finally, an important player from the past arrives back on the scene.

This is our femme fatale, BAEK HAE-SOOK (Han Da-gam), who all our ajusshis were crushing on in college. They’re flabbergasted when she appears at Man-shik’s funeral, and it doesn’t take more than a scene or two with Hae-sook to realize how manipulative she is. In addition, she’s got a particular interest in Goong-chul, and he seems just as swayed by her presence now as he was in the past. 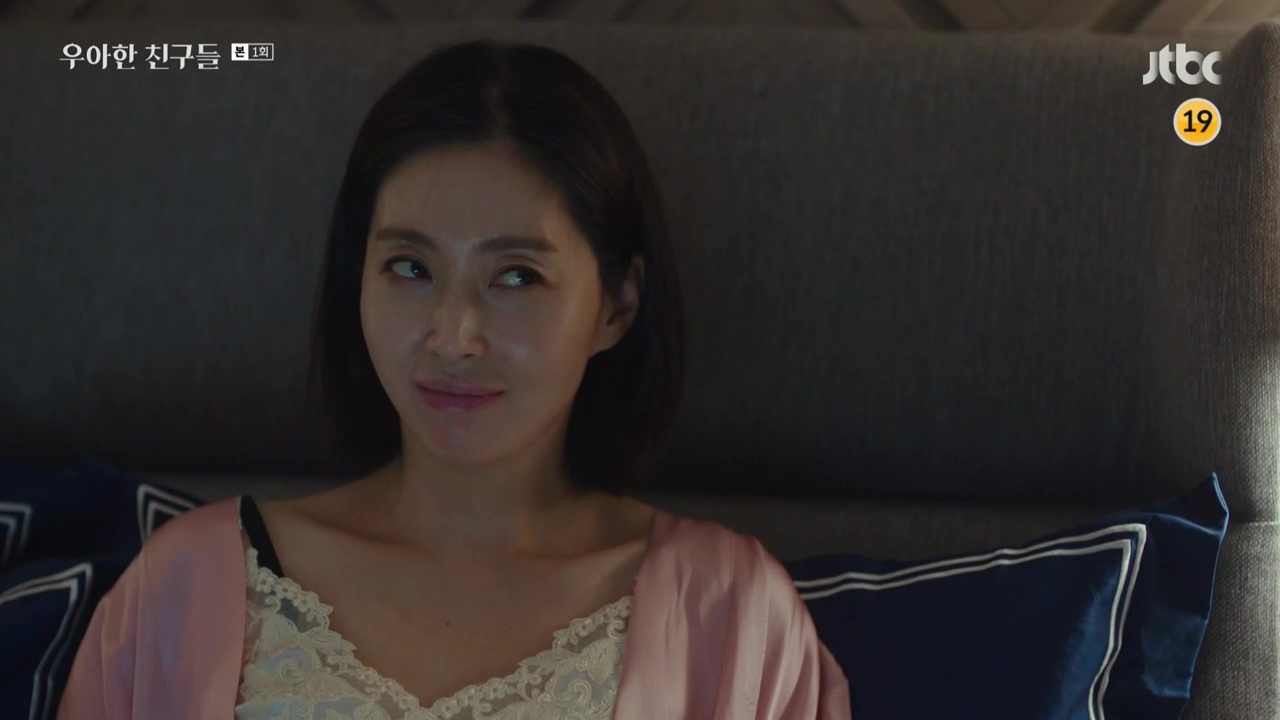 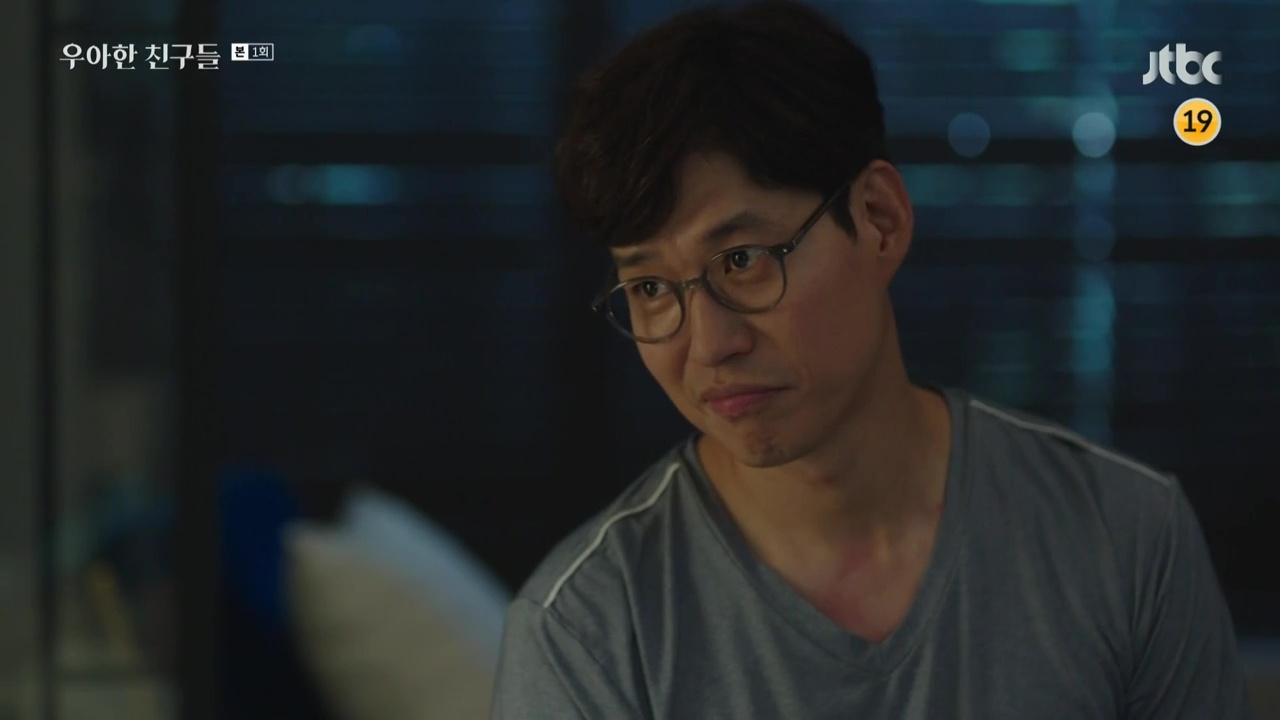 Goong-chul and Jung-hae might humble-brag all day about their adoring marriage, but isn’t that a major red flag? It sure feels like one. Seeing Goong-chul affected by Hae-sook’s return confirms something is off behind the scenes, but it’s not just one-sided — Jung-hae has got some serious question marks around her too.

Not only is she newly suspected of an affair with Man-shik, and seems to have some understanding with Jae-hoon, but a new wild card is also introduced in the shape of JOO KANG-SAN (Lee Tae-hwan). The two meet a few times accidentally… but there’s nothing that feels accidental about it after the second time. There’s tension between them, surely, and an even tenser plot stirring up — at the end of this week’s episodes, she’s sleeping in Kang-san’s bed while he prank calls her husband. Agh! Things are getting messy fast. 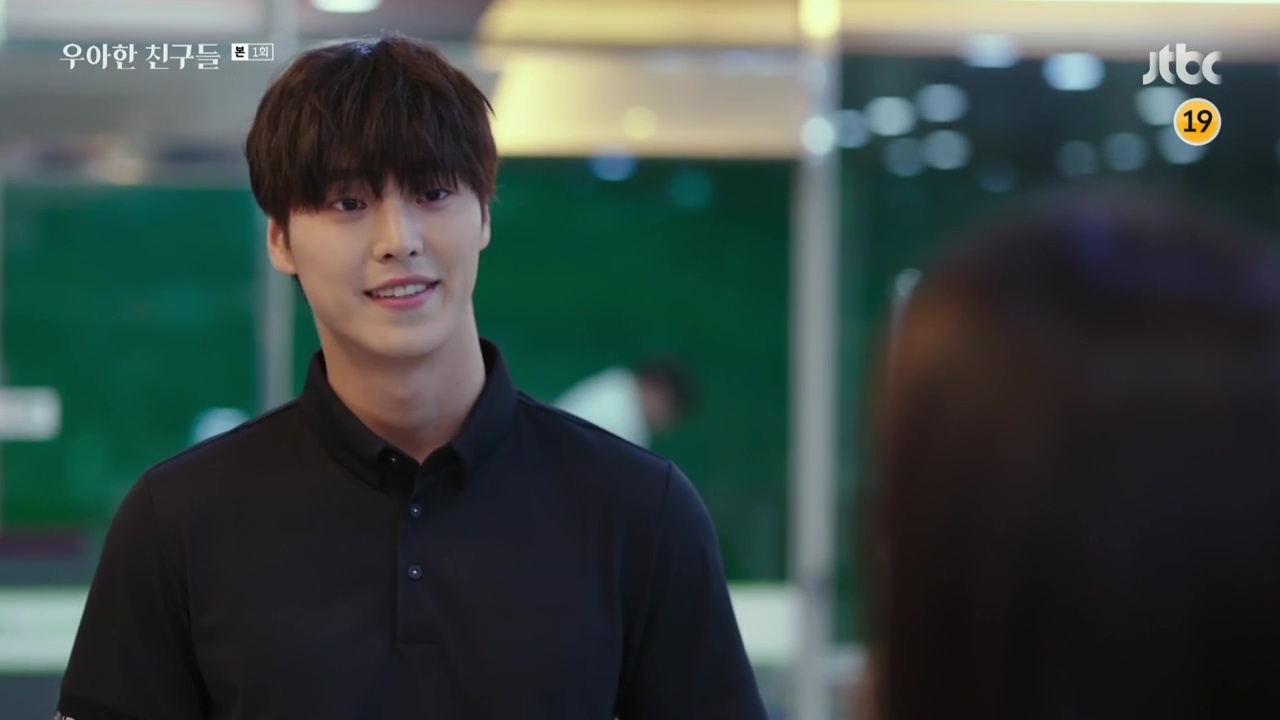 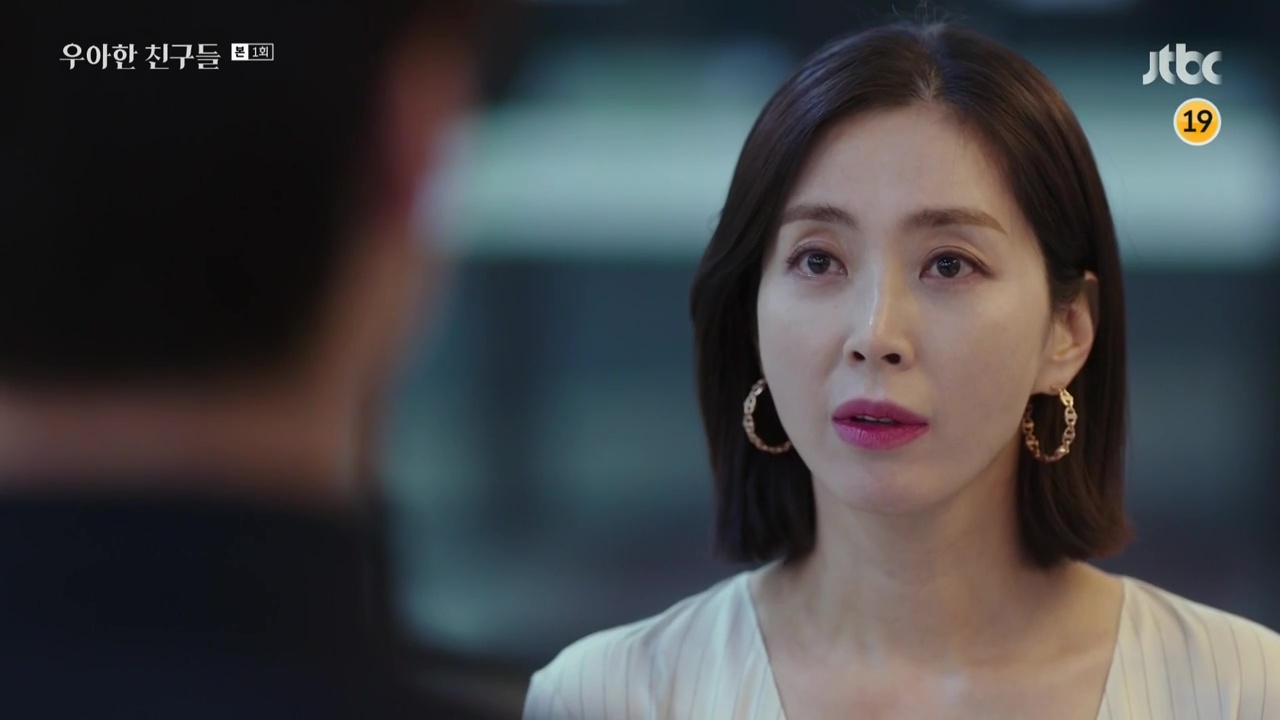 There is so, so much to unpack already, and I really love a drama that can balance an intriguing and juicy story with depth and intelligence, too. There are a gazillion moving parts to this puzzle, and though we’ve had some clues, I think there are a lot more puzzle pieces coming first, before we start to piece things together.

Amongst all the other mysteries and intrigue is the murder scene that opened the drama — we haven’t gotten a glimpse of it beyond that, and we’re left to wonder where in the timeline that event will occur. It adds to the tension, because we’ve seen something of the climax, and now have to jigsaw our way there. But the more we’re shown, the more questions we have. Are all these incidents connected somehow? They feel awfully orchestrated, but they’re so disparate at this point, it’s hard to be sure.

All in all, it’s quite the strong start for Graceful Friends, and I’m looking forward to where the drama goes next. In its first week, it’s proven itself an intriguing story capable of quickly luring you in — but as much as it hooks you, it also sticks with you. I know this story will be on my brain all week until we get more episodes. 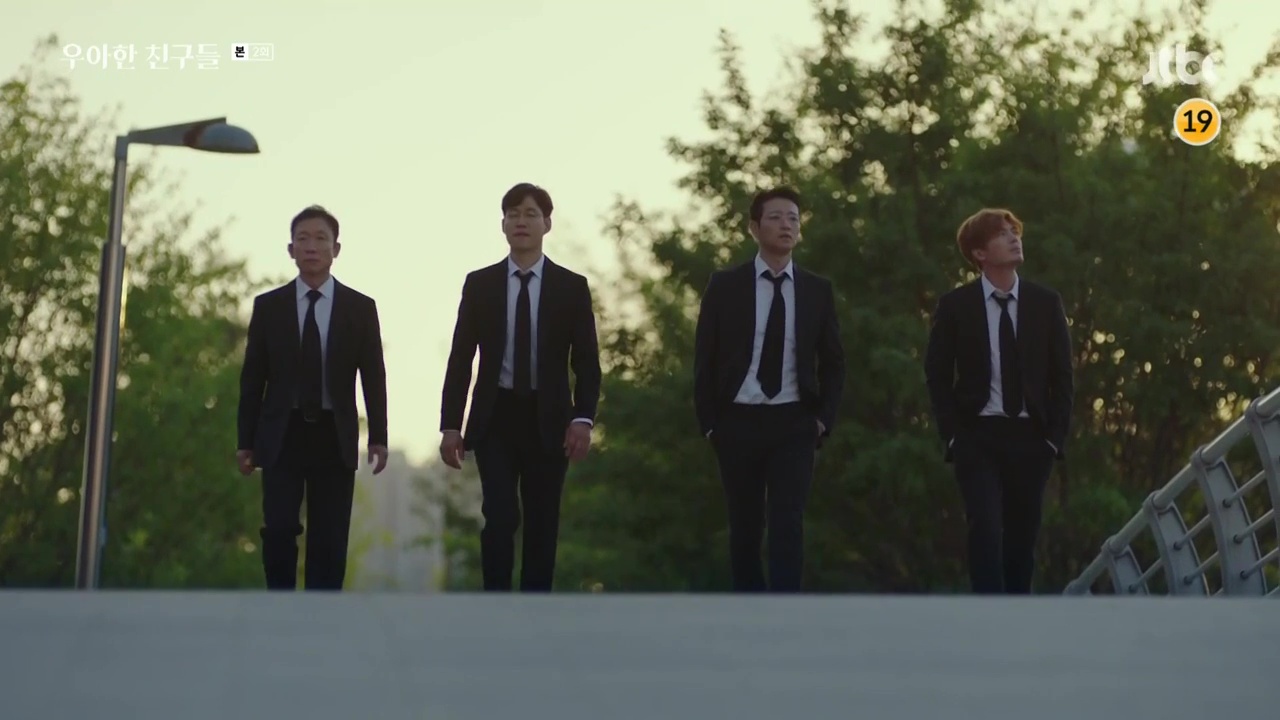 Given Sky Castle vibes, it’s less glamorous than I expected. Though there are heartfelt scenes, I felt the writing wasn’t as clever as - say Unfamiliar Family. I’ll hold from further watching but will monitor reviews if it gets better.

This has the VIP / Sky Castle / World of the Married vibes. Been a Yoo Jun Sang fan so I am sticking it out and following through.

If not for JTBC's promise of Sky Castle'esk plot, I probably would drop this series after week 1. It was not well done premier week.

Not sure if the target audience to this is male because I kinda could not relate to some of the humor elements. When did men in 40's develop sexual issues, or urine pressure issues? And what is all the talk about hanging out with girls in bars when they are all married? It was quite icky.

But, if JTBC promoted this as thrilling as Sky Castle, I feel I should give it a bit of chance. So, I will be watching at least next week.

🤔Maybe I don't want to watch it after all.

The jokes and 40 old men problems is the part that made me give up to compare to Sky Castle or World of Married.

As a doctor, I see a lot of men in their 40s and 50s with poorer urine stream due to BPH (benign prostatic hypertrophy) , and also erectile dysfunction. All these not-uncommon issues can really hit them hard. I personally thought the jokes were funny and not distasteful.
To me this show is as good as Sky Castle (one of my faves) and even better than World of the Married.

What? Sexual and urine issues can be any age...40's is quite normal...very normal.

nd what is all the talk about hanging out with girls in bars when they are all married?
- this is what men do.

The conversations are real and normal. It's not a a fake kdrama romance where guy is 100% perfect.

The first week episodes was nice.

Will wait and see how this one goes before deciding to watch it. Although, from what I can see, it looks dark and intriguing.

This could have used the director or PD of WOTM. There is a good story in this somewhere but drama doesn't know if it wants to be a dark comedy or a funny melodrama or a mystery. It also needs at least one very likable character to drive the narrative and too many little mysteries will make people confused. I have a feeling this will turn makjang with many crazy twists instead of fulling exploring the relationships between characters.

Everytime I hear someone commenting about how 'perfect' his/her life is, I start laughing. 😂 I can't help it the delusion 🤣

Thanks for the recap thread. I wanted it to watch it, but it seems Viki nor Netflix is carrying it in the US.

My goodness all these people are a mess ..... or soon to be in a mess! I almost want to ask, "What is NOT going on here?" because apparently everything that you could think of is happening to these individuals.

Lead character, Ahn Goong-chul seems to "over do" everything, if that makes any sense. Hmmm. Then there's the urologist, Jung Jae-hoon. He just exudes bad news. After one episode you just know things are not going to end well.

What is the name of the song played at cheon, man shik funeral?

I am late to this party and by the looks of the number of comments it got from week to week (sometimes as low as 4 or even 1), not many people came to the party anyway, perhaps because it was hard to find where to view it. But now it's on Netflix, in my geo-block, at least. Nonetheless, I have to say that like @missvictrix, in the opening thread, after two episodes, "I'm hooked". I need to know what happened. Also, since My Unfamiliar Family, which I loved so much because of what Jung Jin-young did with his character Kim Sang-shik, I am now bizarrely entertained by older to middle-aged Korean men going through their mid-life crises. They are funny, poignant, and true, all at the same time, and it does have SKY Castle vibes.

Ooo, enjoy! This show was sadly overlooked but fantastic all the way through.

I'm up to episode 5 and there are a number of possibilities!! It's so disappointing that it has not been appreciated. I've decided it has Misty vibes, but so far, not so dark.

I'm thinking the men in this one represent a cynical version of "A Gentleman's 'In'-dignity". They're aging men, unhappy with their work lives and messing up their wives. Lots to work with here. The addition of a murder should make this an intresting melodrama. Worth a watch.

I live in Fort Lauderdale FL and it is showing on Netflix here.

I don't like the whole story that much compared to AWOAMC and Sky Castle but kudos to all the actors and actresses, for a job well done 👏 Song Yoon Ah, you're the best!