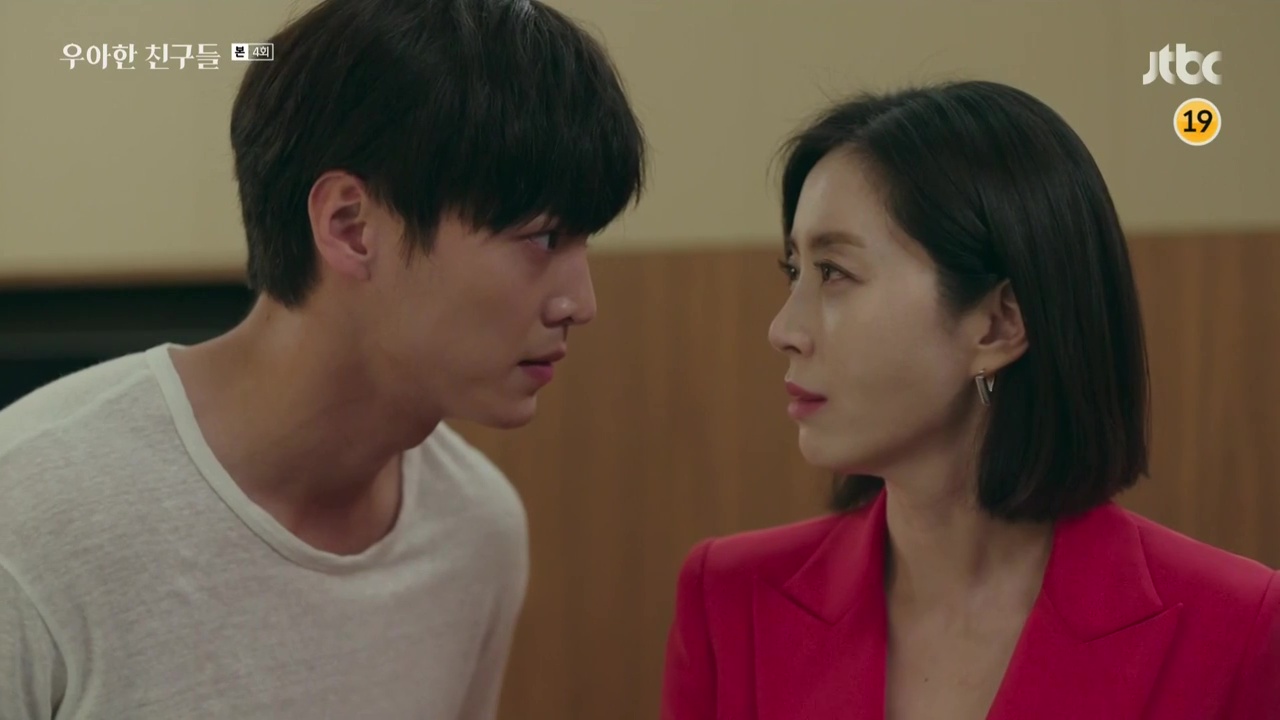 After getting acquainted with our friends last week, this week things fall into place for our leading couple. And those things are not good things. Our heroine is caught in the crosshairs of a stranger’s devious plans, and the repercussions start to echo through her family, and their circle of friends. 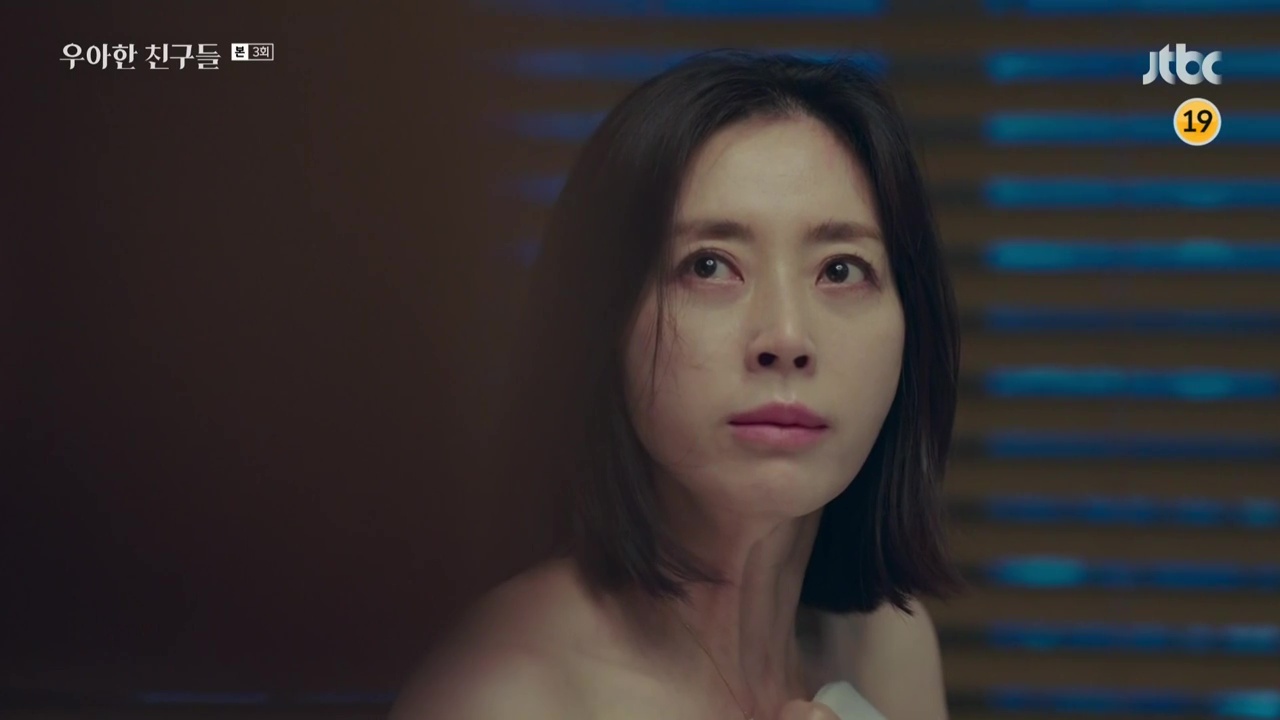 Last week we left off with Jung-hae waking up in the bed of the super-hot-yet-absolutely-terrifying Kang-san. This situation is really as bad as it looked — possibly worse, even. Jung-hae knows she was drugged and put in that circumstance for the sake of incriminating photographs (for blackmail and leverage), but it turns out that’s only the tip of the iceberg. “Things are about to get really difficult for you,” Kang-san predicts.

She’s amazingly strong and put together for a woman who’s just been through such an ordeal, but the way things play out this week only make the situation deteriorate further. At first, she refuses to tell her husband Goong-chul, or even admit that anything is wrong. Their total lack of communication drove me crazy at first, but then I thought: in this moment, she thinks he’s been meeting with Hae-sook, so she’s naturally quite distrustful of him. Meanwhile, Goong-chul’s received the packet of text messages she exchanged with Man-shik and he’s suspicious of her and also equally distrustful. The timing and confluence of all these things couldn’t be worse. Our couple is at an impasse. 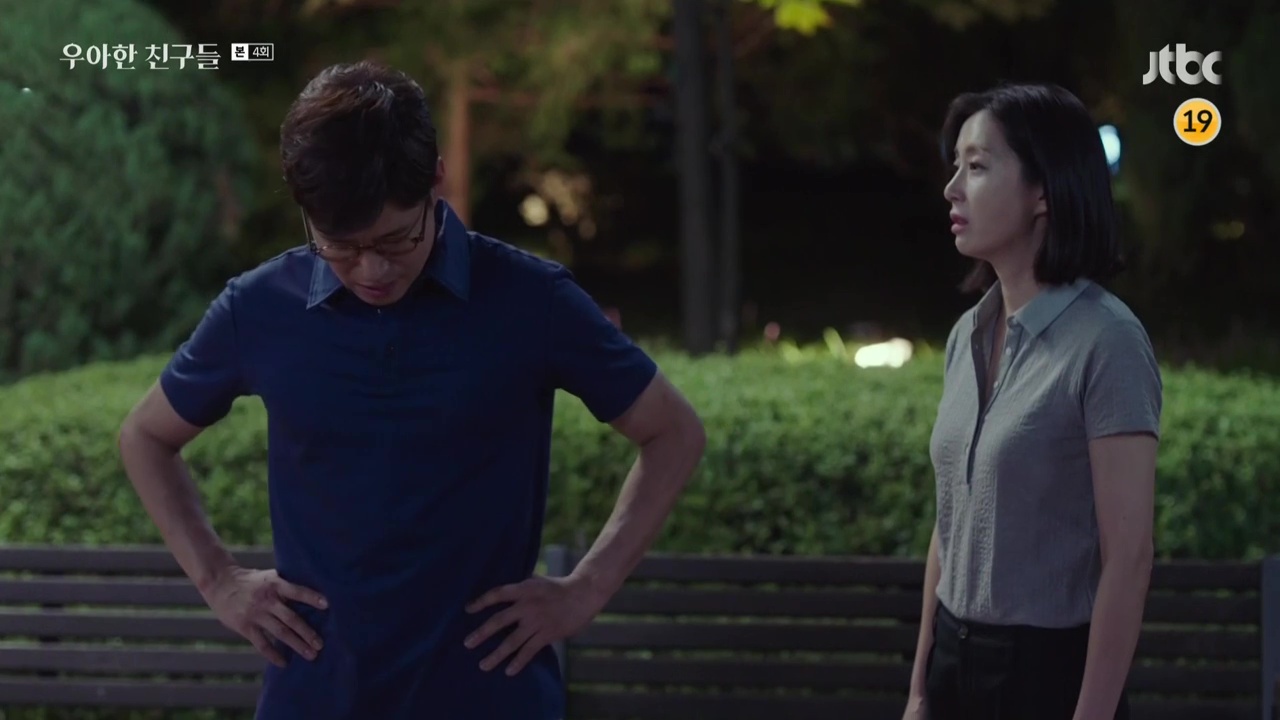 As predicted, difficult times lay ahead. With his plan set in motion, Kang-san is like a dog with a bone. He makes Jung-hae’s life miserable just in a matter of days, threatening her with releasing the photos, actually sending the photos to her husband, boldly calling her to visit him in a fancy hotel, terrorizing her and her husband on his motorcycle, and the list goes on. And it’s all the more freaky because of how Kang-san carries out his plot.

Nothing seems studied or strategic about the way he operates. Instead, he’s completely haphazard and unhinged. He can go from strangling Jung-hae to wanting to sleep with her to purposefully inciting her husband to beat him to a pulp, all in the space of five minutes. Kang-san is so off the wall that this situation quickly escalates — and props to Lee Tae-hwan here. I never would have guess he could play such a convincing maniac, but that deranged, desperate smile of his is now lodged in my brain forever. 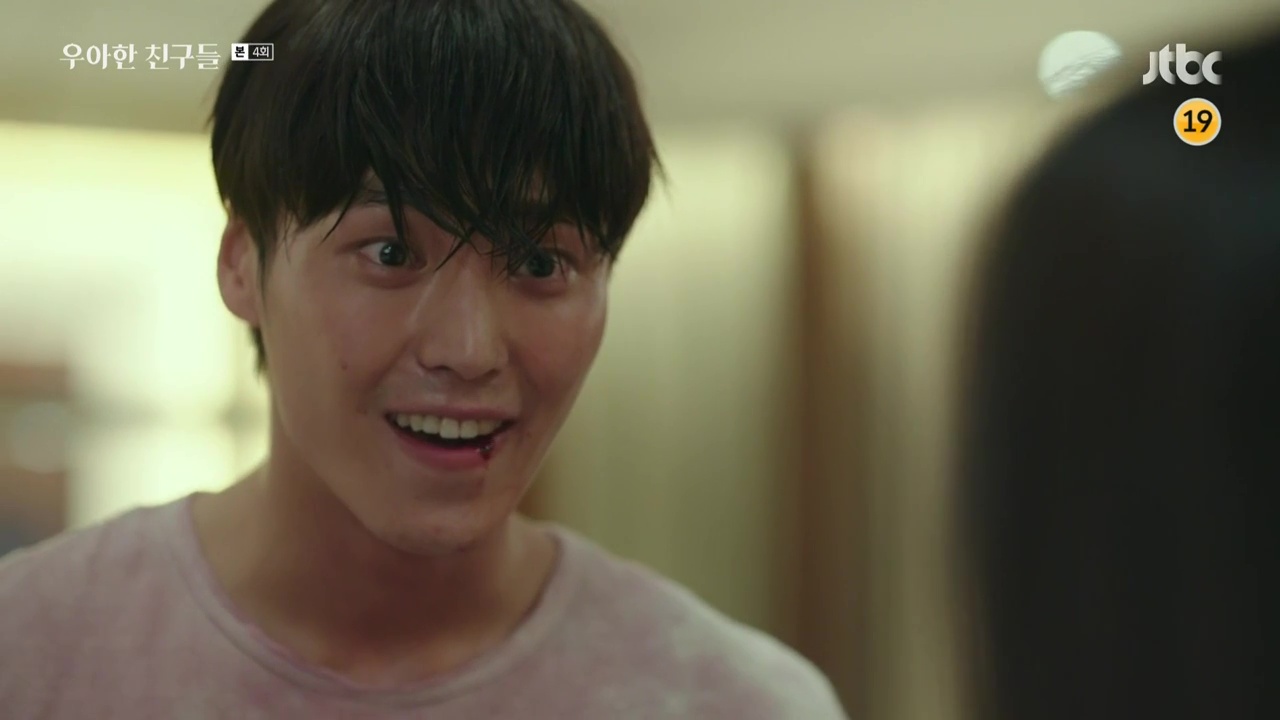 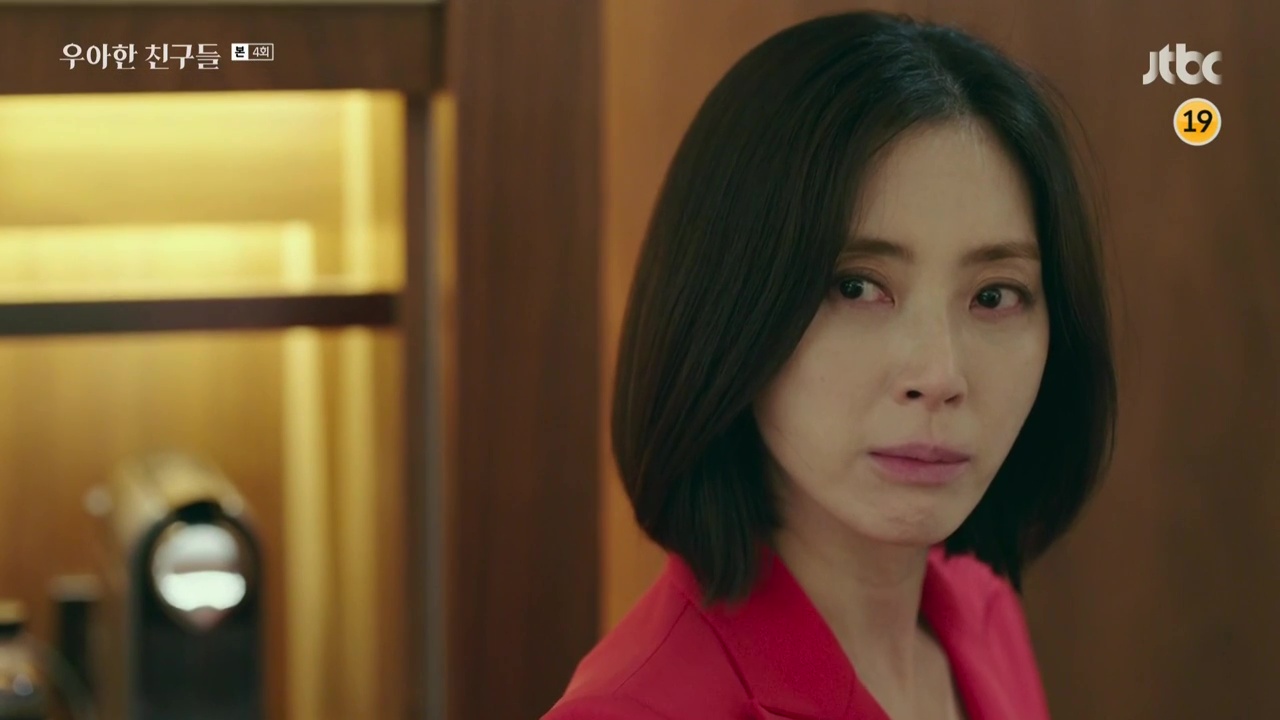 But is he just a deranged psychopath? This week we learn that Kang-san also has a hand in the lives of our other friends, too. There’s clearly some kind of weird recognition between him and our adult film director, Hyung-woo. And, worse than that, we see Kang-san pressuring Hyung-woo’s son to get with a girl he wants to introduce him too… and lo and behold, this little guy finds himself in an eerily similar position as Jung-hae. Kang-san is the thread that ties all these unfortunate events together, and there’s definitely the feeling of something deeper and darker going on that no one realizes yet.

Jung-hae certainly doesn’t seem to realize how bad things are going to get — while she’s going through this nightmare, she blatantly refuses to go to the police. Why?! I mean, this guy is clearly a criminal doing horrible things on repeat, and is a danger to society. She seems to think her reputation (i.e., the photos not getting released) is more important than dealing with this through the proper channels.

That decision has some major consequences. When Jung-hae finally tells her husband what’s been going on, and he (somewhat appropriately) loses his mind. But Goong-chul is violent and furious in a way that’s kind of upsetting. When he takes off in a fury for Kang-san’s apartment and tries to strangle him, sure we’ve been prepped for this scene, but it somehow doesn’t feel out of character at all. 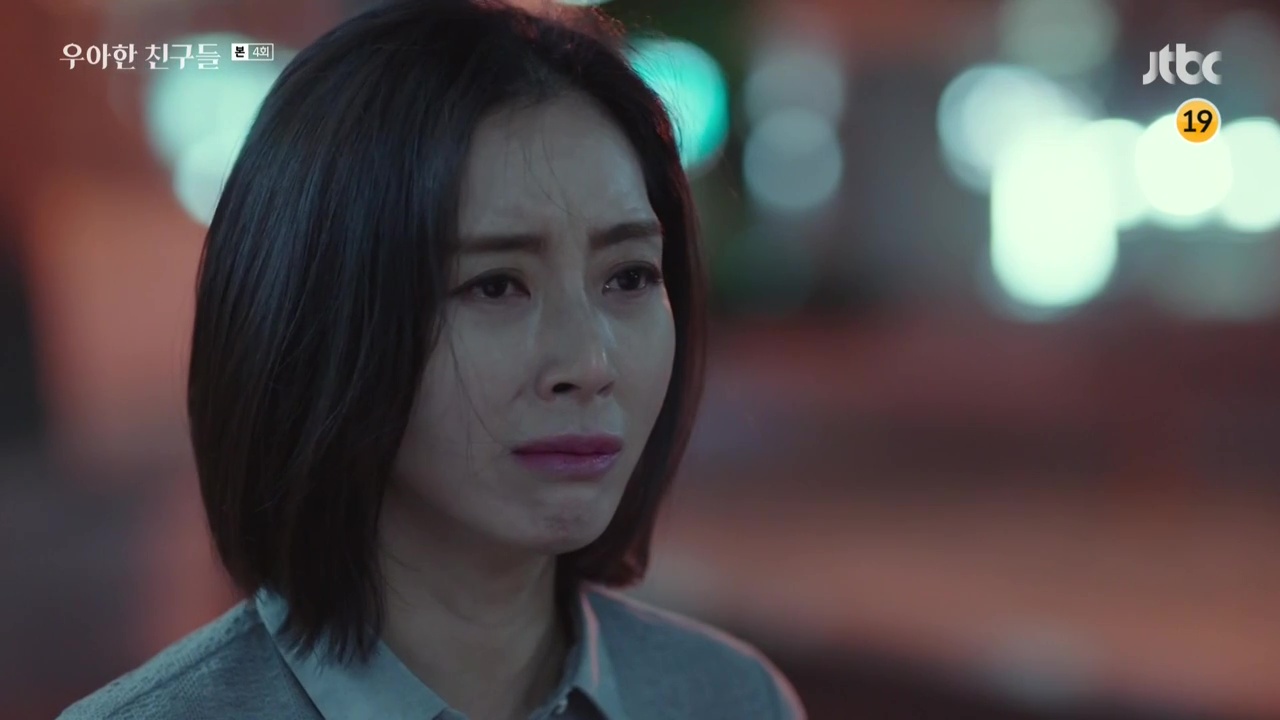 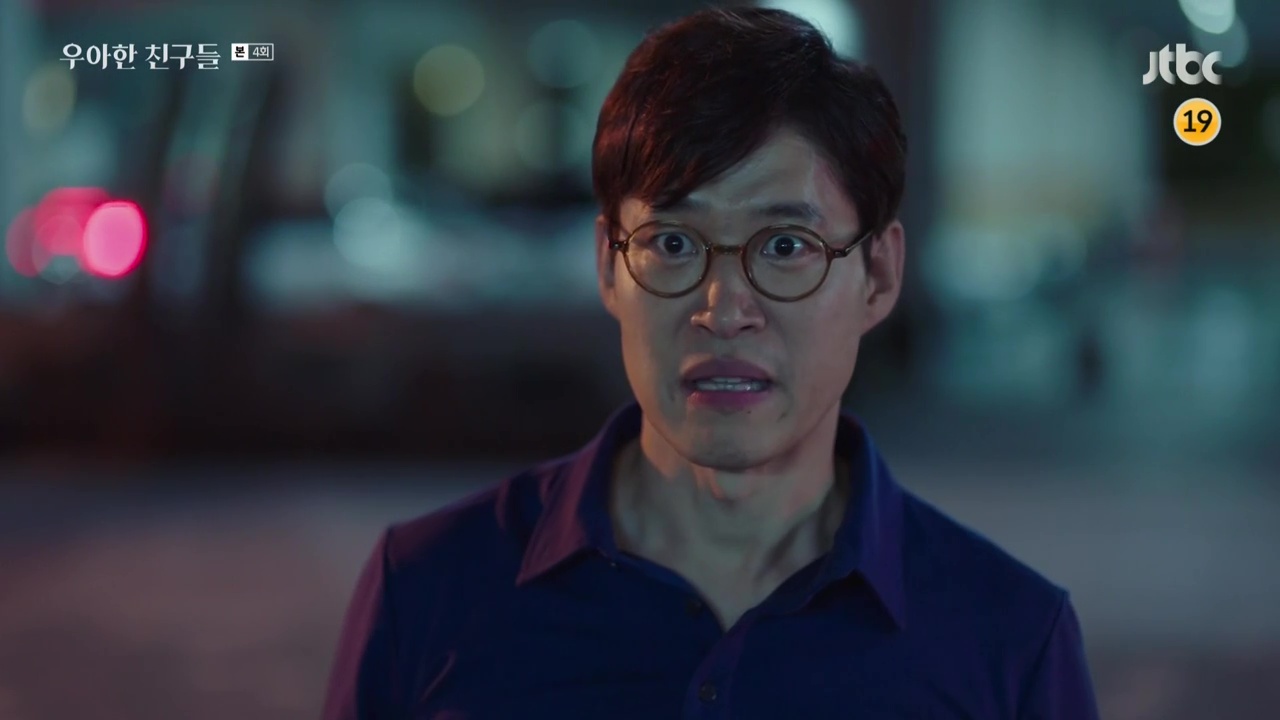 And just like that we’re right back to where we started — the murder scene that opened the drama. The four-episode journey we’ve taken to get here seems like the perfect amount of time to me. We’ve gotten to know our characters, saw the direness of the situation first-hand, and have all the context we need to now understand what happened (and why) at the scene of the crime.

Now, ostensibly, we’ve got the rest of the drama to deal with the aftermath – and if the preceding string of horrible situations is any sign, it’s going to be a rough ride. One of the most disturbing things we learned this week (as the episode closed) was the fact that Goong-chul has already been through a very similar event before.

That “thing” that happened 20 years ago that our friends don’t speak of and Hae-sook threatened Jung-hae about? We learn this week that it’s all too similar to the murder we just witnessed: in a fit of rage to protect his woman (then, Hae-sook), Goong-chul marched to the abusive professor’s office. Our friends run there after him, much like they followed Goong-chul to Kang-san’s apartment — and then find the same thing: Goong-chul standing in shock over a dead body, blood everywhere. 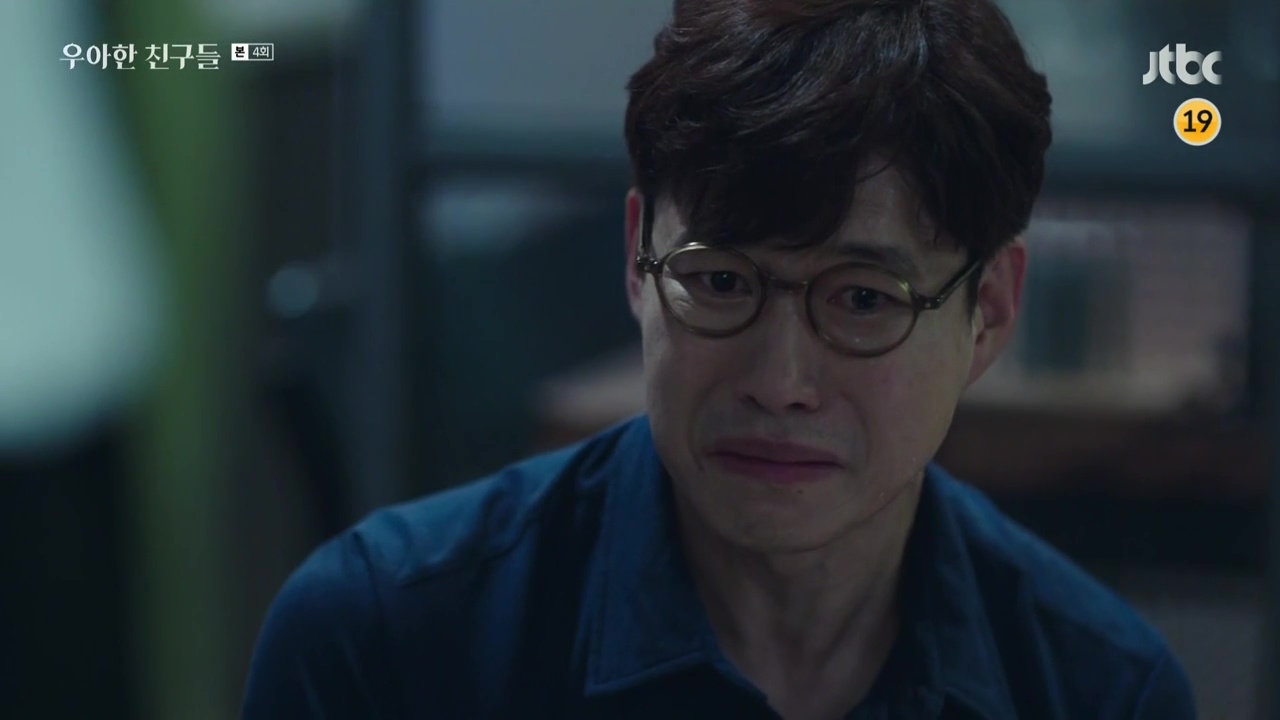 Can we believe what Graceful Friends is showing us at this point, or are there more twists in store? I like how we’re never quite sure how much we can trust the storytelling — or our hero. I really like Goong-chul as this sort of short-fused unreliable narrator. He seems sweet and earnest… but he’s also really violent and can’t seem to control himself when pushed to a certain point. While we’re not sure what did it in the past, in the present day, we see all too well that Kang-san’s taunting and manipulating (and of course the crime he committed) brings Goong-shul to the breaking point.

I hope our graceful friends step in to help this family in their hour of need, because this week our storylines were more separated than when we met them last week. Each of the storylines is interesting enough (Chun-bok being mistaken for his wife’s father, Hyung-woo getting humiliated while trying to land a directing gig), but I like them most when they’re all together, being the grown-up boys that they are. While their relationships seem pretty solid, I have a feeling that loyalties might be tested as we venture into stormy waters. 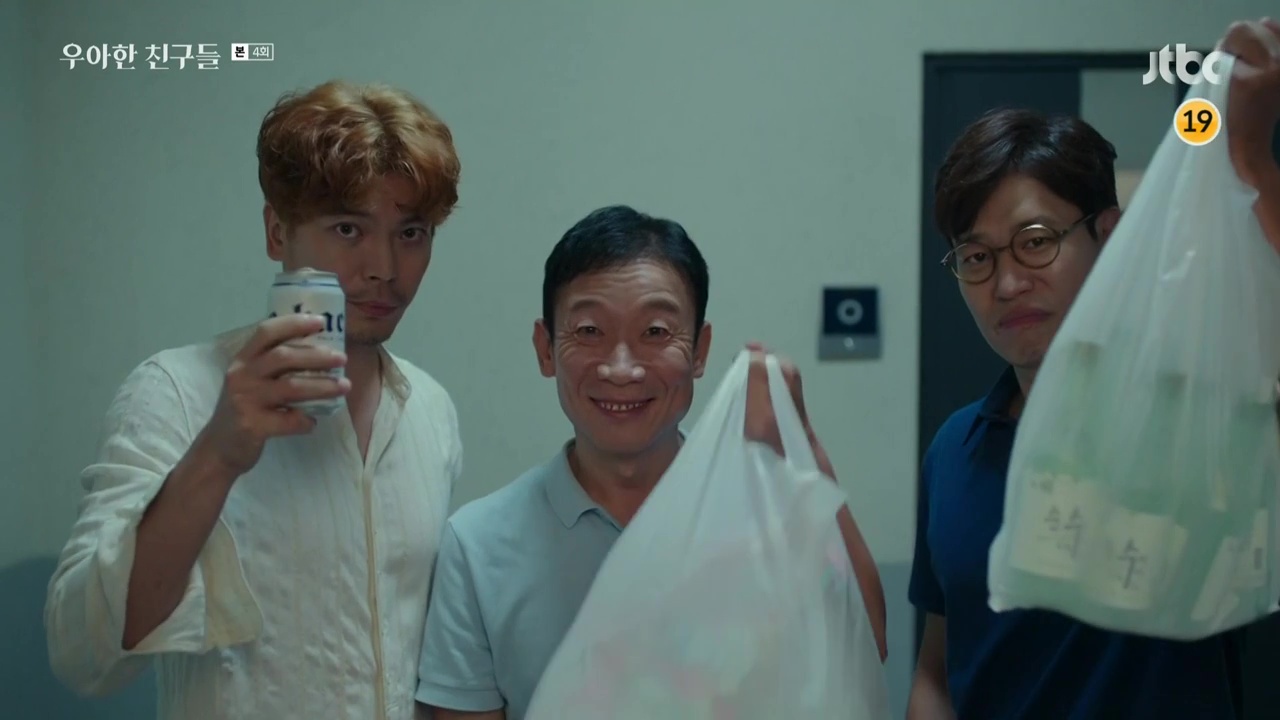 I think I'll watch this one, if I have the chance.

Agreed, Tae Hwan is killing it in his role. This would be his first really bad guy role methinks?
But oh my, i have to prep myself psychologically everytime before watching this cuz it really messes u up man-same dark vibes as couple's world and what was that jang nara's drama about a cheating hubby? That one.

"Tae Hwan is killing it in his role" and quite literally too. Too soon?

Thanks for the weecap. This drama is quite engaging so far. Looking forward to the coming episodes :)

The writing on this drama needs a tiny bit of polish. I am okay with the plot and where it is going, but the bar scene was a bit weird. I feel like it was there, but also was not there. She is not only a doctor, but also a woman, she should know better about drinking from strangers. But yes, Ill keep watching.

And yes, it is good to see a pretty boy playing a bad guy for once.

There are so many plot holes I have seen. Like, how did Goong-chul know Kang-San's apartment? There aren't details or scene how he got the apartment location/number of KS. Or I just missed it?