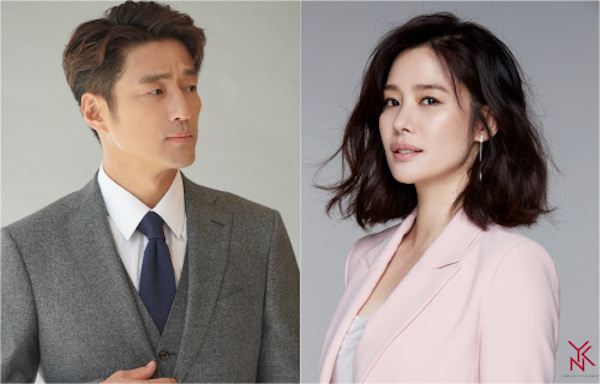 Kim Hyun-joo (Watcher) and Ji Jin-hee (Designated Survivor: 60 Days) will reunite in upcoming JTBC drama Undercover, which is the Korean adaptation of a BBC show by the same name. Ji Jin-hee plays an NSA agent who has been hiding his identity for a long time. Kim Hyun-joo plays a righteous human rights lawyer who becomes the first-ever commissioner of a civil servant corruption investigations ministry.

The two confront immense powers that use the country as an excuse to pursue their own profitable agendas. In discovering the truth behind these powers, they find different aspects of humanity revealed, and a battle begins to defend justice and fight for love.

Previously, Ji Jin-hee and Kim Hyun-joo worked together in passionate melodrama I Have a Lover, in which they played a married couple. In Undercover, they play a married couple again, but the circumstances are very different. Ji Jin-hee’s character was handpicked to be an NSA agent right out of police academy because of his extraordinary reflexes, and his daring bravery allowed him to enjoy a successful career within the organization. He falls in love with Kim Hyun-joo while he’s on a top secret mission, and they get married. When she becomes a candidate for commissioner, his secrets make them vulnerable to a spiraling power struggle.

Ji Jin-hee said, “I picked this project because I was so touched by Han Jung-hyun [my character] and how he sacrifices himself for the ones he loves. I’m looking forward to working with Kim Hyun-joo, whom I haven’t seen in a long time. I promise this will be a good project with good acting, so please look forward to it.”

Kim Hyun-joo said “I became immersed in the project as soon as I read the script, and it showed complex relationships between all the characters. I wanted to return to the screen with a good project and character. I felt strangely drawn to Choi Yeon-soo [my character], perhaps because she’s close to being what people may expect in an ideal person.”

JTBC drama Undercover, directed by Song Hyun-wook (The Beauty Inside) and co-written by Baek Chul-hyun, Song Ja-hoon, Jung Hye-eun, will begin airing in the first half of 2021.

Song Hyun-sook PD is quite busy as of late, with Graceful Friends premiering this week and his next project already announced.

It seems he's veering away from his usual rom-comy, cheery dramas, which is what I'd come to associate with him. So I'm curious and a little nervous to see how he handles this change in tone. I did like what I saw of the teaser of Graceful Friends.

Maybe we'll forget about My Shy Boss, Revolutionary Love, Meloholic, and The Beauty Inside? 😅

Based upon the source material (which I strongly recommend!) this suggests a "Misty" kind of vibe, but hopefully, without the oft-seen truck of tragic fate.

These two were amazing in I Have a Lover.
Will definitely look forward to this.

I am so excited for this!!! I've watched all their collaborations. Have you also seen their 2004 rom-com, Miss Kim's Million Dollar Quest? It's kind of dorky but a lot of fun. She plays an interior architect who gets dumped on her wedding day. He plays the wedding photographer who ends up whisking her away from the wedding to help her avoid embarrassment. (They're also fated in other ways, involving her ex. and the ex's new lover.)

They end up partnering together to rebuild money they've both lost. Cohabitation/fake marriage follow along with cycles of boom and bust with various businesses thriving and crashing. Hilariously, their fortunes take them from a two-bedroom flat down to a storage room, where they live with all their boxes and sleep inches apart—separated only by a sheer curtain.

As we already know, their chemistry is fantastic. It's fun seeing them kind of baby-faced and goofy.

I feel I need to watch this.

Fun fact: Ji Jin-hee used to be a professional photographer so he holds his camera with real authority.

They have incredible chemistry in I Have A Lover. Both are in my favorite book, especially KHJ whose can virtually take on any role. She practically plays three roles in IHAL with marked difference in each.

I did watch Miss Kim’s Million Dollar Quest but that was ages ago that I couldn’t remember anything LOL.

Will definitely check this out because both know how to pick a good project and their last outings respectively - Designated Surviver 60 Days and Watcher - are two of the finest in 2019.

I miss Kim Hyun-joo. Good to see her back in a JTBC project.

Yes! I fell in love with her chiseled beauty in Miracle That We Met (2018). I love how her emotions shimmer right below the surface. Have been catching up with her work since.

I liked The Miracle We Met. One of my favourite dramas of 2018. The cast were amazing, both adult and child cast.

These two being paired a lot, it's not like I'm complaining though. They could be Korean version of Shahruk-Kajol lol. Too bad it's not aired this year.

I'll watch anything Ji Jin Hee and Kim Hyun Joo star in together. So happy we get to see this pair for a third time! They had so much chemistry in IHAL, it's unreal.

I love both actors, I think I’m in.

Loved him in Misty and Designated Survivor. Enjoyed Watcher too. Another one to look forward to.

I'm So excited! Good luck to you both.hoping that you'll build a good chemistry again like your previous kdrama (I have a Lover)

It's always great to see him.

Netflix has changed the official title of this one to 'Nemesis' (네메시스). I guess they didn't want it confused with the upcoming JTBC drama 'Undercover.'