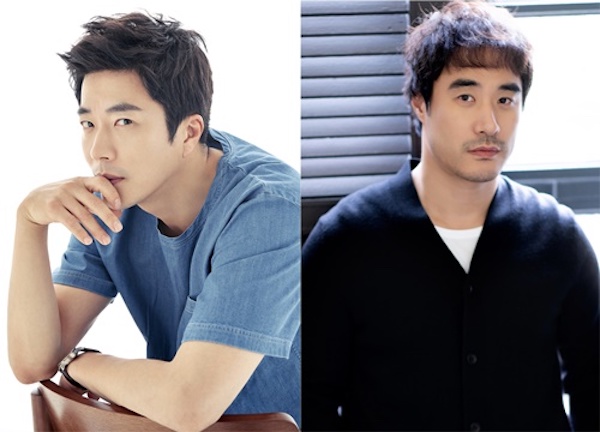 Kwon Sang-woo (Mystery Queen 2) and Bae Sung-woo (Live) have confirmed that they will be starring in the new SBS drama Fly From Rags to Riches. It will tell the story of how these two men defend and help raise the voices of innocent victims who have been framed in court.

Kwon Sang-woo plays a public defender who only graduated from high school. Born on a small island to an undertaker father, he realizes late in life that he’s interested in the law. He has ambition and fiery passion that drive him. Without any connections or resume-worthy experiences, it’s only his meddlesome personality, empathy for others, and belief in justice that have gotten him this far. He listens to the petty offenders that have all been ignored by the system. Finally, he comes across a case that makes him the first to get a retrial and win for a common criminal offense.

To reveal the truth, he teams up with Bae Sung-woo’s character, a crude but expressive reporter. After college, he worked as a part-time laborer and became a reporter because of his extraordinary writing skills. He threw away the path of success in order to pursue the stories that no one tells. Unlike his appearance, he’s an affectionate crybaby. The team-up between these two buddies against the corruption of the judicial system promises to be a refreshing and comic drama.

Directed by Kwak Jung-hwan (Miss Hammurabi) and written by Park Sang-gyu, SBS Friday-Saturday drama Fly from Rags to Riches has begun filming and will air in the latter half of this year.

The character descriptions make this sound interesting. While no wholly original, they seem different enough from the usual dramaland character profile. I enjoyed Miss Hammurabi, so fingers crossed.

I loved Bae Sung-woo in Live and am happy he's back in drama land. I could go for a good bromance.

BSW in live is fiery, heartbreaking and awesome all rolled into one - unforgettable performance!

He was top-tier and I have an entire thesis on here to prove it :3

What does "fans self" mean? Btw, I'm a big fan of KSW. He's my fave Korean actor!

that they find them very attractive normally :D

Kwon Sang Woo! I liked him in Mystery Queen.
I hope this underdog drama is a good one cuz I wanna tune in.

HELLO THIS HAS REVIVED ME FROM MY HIATUS ON DB

"A crude but expressive reporter" My tears are freely flowing at Bae Sungwoo being funny as he deserves to be, thank you

Kwon Sang Woo was probably my first Kdrama love from the ever-so-epic-torturously-makjang Stairway to Heaven...

while i hated StH, i embarked on a marathon KSW watch of all his dramas and movies. his works then led me onto other actors/actresses' works...

so i guess Kwon Sang Woo was my "gateway Kdrama actor".
; )

i try to watch anything that he's in... don't always finish, tho...

and that is how your one sided love for kwon sang woo starts! but it won't end for a long time

KSW is my fave Korean actor. Have you seen Sad Love Story? That's my fave from him.

Finally someone who loved Sad Love Story like me. That is where I first saw KSW and he became my first Kdrama love. Its my favourite drama of him, followed by Temptation. Still dont get why most say it was not nice.

He's also my getaway to K-dramas and K-movies. Love him to bits and pieces in My Tutor Friend and Once Upon A Time In High School. Those are classics.

Haven't seen Kwon Sang-woo in a while, so it'll be nice to see him in dramaland once again!

you only have to say one name: kwon sang woo and i am on board!!!

I'm so happy to hear my oppa (I'm wishing), Kwon Sang Woo, is back. He's a really good actor, especially in Romance and Comedy. Although, this one will not be in those genres, I'll still check it out just because he's in it.

no problem. he can work it out! could be some hijinks!

Kwon Sang Woo is my favorite actor forever, i will watch his new drama series.