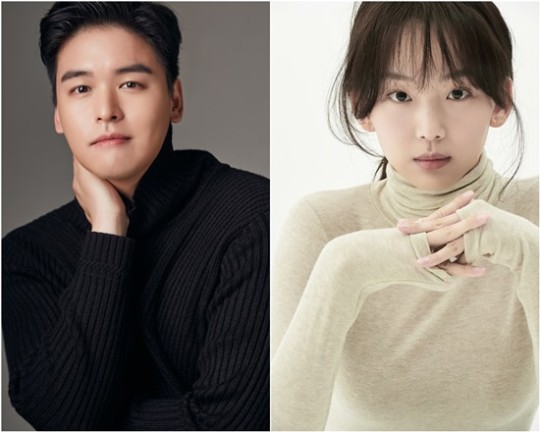 A new weekend drama is being planned on KBS, called Oh! Samkwang Villa, and casting has been confirmed for actors Lee Jang-woo (Graceful Family) and Jin Ki-joo (The Secret Life of My Secretary).

The drama is centered around the Samkwang Villa neighborhood and the different relationships between the residents who call it their home. The story’s focus will be on how they came to live in the area and their growth as they become a tight-knit family community.

Within this story, Lee Jang-woo takes on the role of Woo Jae-hee. He comes from a well-off family and his father (Jung Bo-seok) is the president of a large company. However, Lee always clashed with his father’s conservative and old school mindset and left home as soon as he was accepted into college. He stayed independent by supporting himself through part-time jobs and worked hard to become an architect after graduating university.

Jin Ki-joo plays Lee Bit-chae-woon, who has a tough and straight-forward personality who dreams of one day becoming a textile designer. She works as a technician for an interior decoration shop and visits the home of customers to install furniture, curtains, and lighting. As the eldest child and breadwinner of the family, her younger siblings look up to her and depend on her. And she often has to step in and protect her mom (Jeon In-hwa), who is too trusting and is easily hoodwinked by others.

On the production side, directing will be done by PD Hong Seok-gu (My Only One) and scripts will be penned by writer Yoon Kyung-ah (A Moment at Eighteen). The two previously worked together on Perfect Wife.

KBS’s upcoming Oh! Samkwang Villa is currently being planned to air in September, following Once Again.

Sounds boring - another rich man meets a poor girl and they fall in love. I already predict low ratings by the Knetz.

This is a KBS weekend drama. It will have higher ratings than all the other dramas. Once Again's highest ratings to date is 33.0%.

U are right!The ratings will fly high like all KBS weekend dramas... I have quite the soft spot for Jin Ki-joo even if the story is clishe and very weekend centric feel drama.Glad if Jin Ki-joo gaines more spotlight...

It will have good ratings but unless it is actually a vey good show it will not match ONCE AGAIN, which has been an unusually good weekender, and is well worth watching.

KBS family dramas are indeed very successful but this upcoming drama didn't sound to me like a family drama but rather a 16-episode drama (or 32-episode drama technically). But after reading your comment, I read again the synopsis and I guess you're right and it IS going to be kind of a family drama.

The success or not of a weekend drama depends on how family relationships play out - rather than depending on a main plot. And strong veterans and side characters or 2nd or 3rd pairings are as important as the main leads.

Eccentric grandpas or grandmas are always winning. So are the younger sis and bro. I can recall right away two recent dramas that the second or third pairing steal the show: (1) Park Hyung-sik and Nam JI-hyun in What's Wrong with My Family and (2) Sung Hoon and Shin Hye-sun in Five Enough. All four have since been launched to bright leads.

I like both actors! Lee Jang-woo is cute in an underrated drama: I Do, I Do. Jin Ki-joo was really good in Come and Hug Me and TSLOFMS. Weekend dramas are mostly miss for me, but it could be a cute pairing plus more offers since KBS weekenders do well in ratings.

This is a maybe.

Sounds like every other other weekend end drama ever but what can you do LOL? They are great And should be a fun show.

Lee Jang-woo and Jung Bo-seok as son and Dad? LOL because Jung's character hated Lee in Rosy Lovers and Lee ended up being Jung's son-in-law.

So happy I discovered this now😍
They're both my fav actors😘🥰