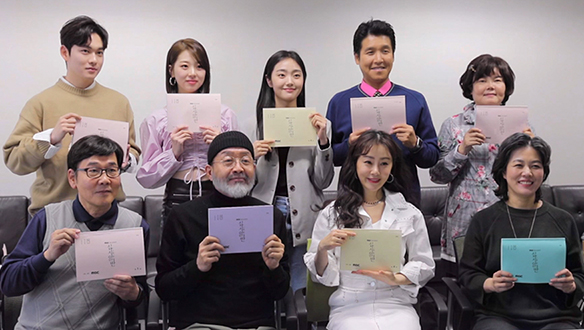 Kim Hye-joon and Oh Nara costar as a mother-daughter duo in the latest from MBC, United Effort to Accomplish One Thing, (also known as Chip In). Kim’s father (Nam Moon-chul) is fabulously wealthy and, less fabulously, prickly artist. When he beckons Oh Nara and Kim Hye-joon back “home,” they find he’s gathered all his living family members together. As his only child, Kim is ideally placed to inherit his multi-million dollar estate, but that means she’s in the crosshairs of all the other potential heirs–and even her mother seems to be affected by the wealth that’s nearly in their grasp. Kim is the only person unaffected by the prospect of wealth and unsettled by returning to her father’s home. The new living situation is made even stranger by a series of letters and keys sent to each person in the house but the sender remains unknown. When a life-changing amount of money is at stake, how far are people willing to go to secure their place? I have been looking forward to Kim Hye-joon’s next drama ever since I finished Kingdom, and I’m excited that she’s already managed to snag her first leading role in a drama. With Oh Nara by her side, I’m expecting equal doses of thrills, laughs and eeriness as they (and we) try to work out who will inherit it all.

Ooooh I'm excited for this! I like that it's only eight episodes since that means it'll probably be really well paced and not drag :)

My thoughts exactly! The premise seems interesting and I’m always down for a mystery! It does remind me of that movie Knives Out (if you’ve seen it) though probably without the murder aspect... unless...

I've only seen the Knives Out trailer but I also got the feeling that this show might have a similar vibe to it :)

What's up with the shorter episode counts lately? I wonder if it'll tighten up the plot... side note, I agree it feels like a Knives Out or Westing Game-esque plot :)

i think the shorter dramas have to match the longer titles

Hopefully, the short episode count means we will get a nice, tight plot. I'd love it if the characters were mostly likable, as well.

For a minute I thought this was dramabeans' live screening event/ fundraiser lol
I hope this is a whodunnit kind of drama, maybe kim can play the accidental sleuth?

Oh this is already out? I think I saw the teaser, everyone had floating numbers above their heads?