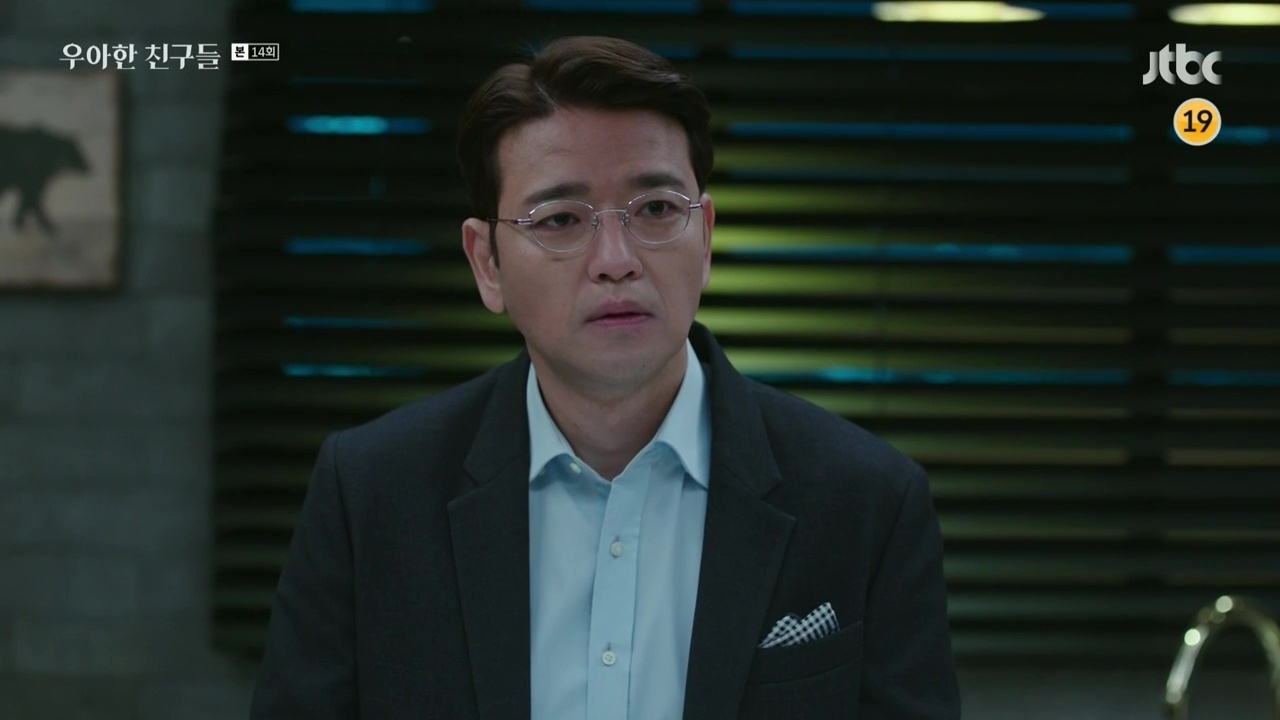 Hurt and pain change people, and this week we see how that plays out in our characters’ lives. Whether its old pain that’s been nursed over the years, or a frightening new event, mindsets, motives, and life views are all radically altered as our friends face the truth. 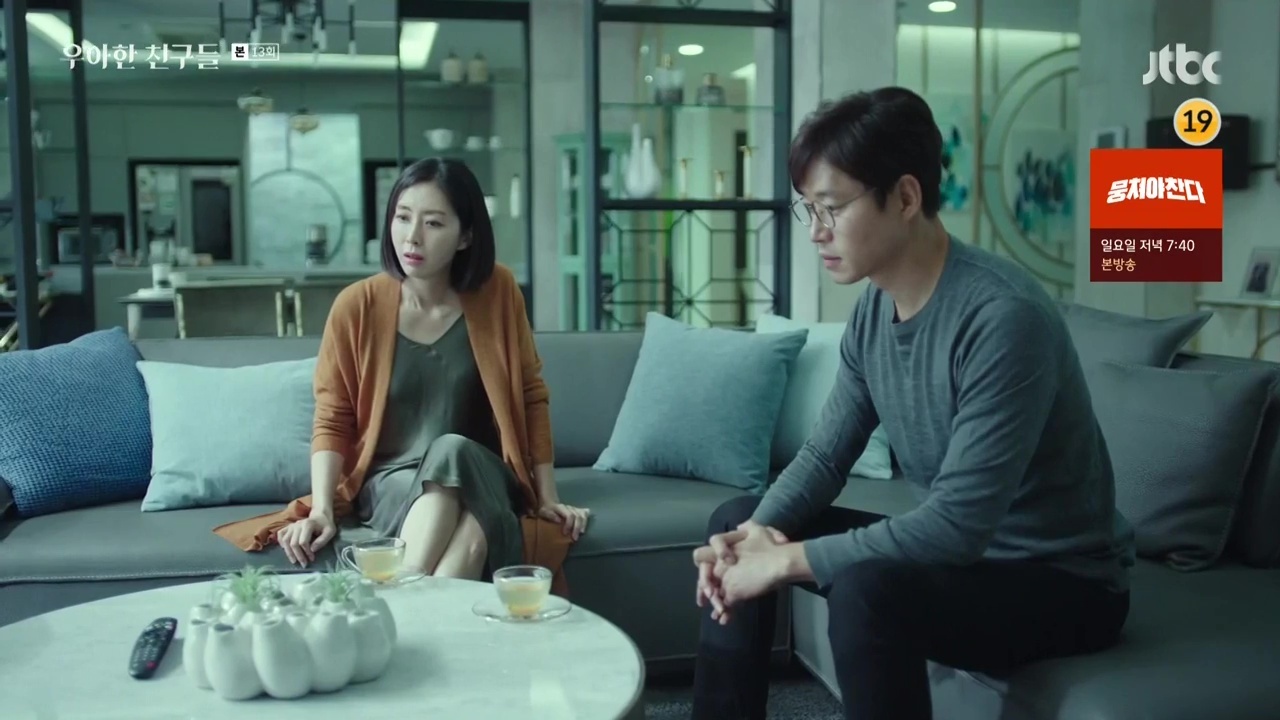 Graceful Friends is nearing its close, so you’d think that after so much coming to light around Jae-hoon last week, that that would be our climax, and that the plot would react to it, and settle. Not so. Instead, the vortex is still ongoing, as if each reveal and bit of truth only feeds the storm around everyone even more.

Even so, there’s a significant shift this week in our drama. There is no more playing pretend, no more subterfuge, and one by one the secrets are told, and left to have their impact. The first of these shifts is during the conversation between Goong-chul and Jung-hae, where the truth is finally out. Goong-chul has confirmed that his best friend has been in love with his wife, and even more so, that they were engaged in the past. Understandably, this huge secret shakes their marriage because it shakes Goong-chul’s trust in his wife, and perhaps reveals how little she trusted him, as well. 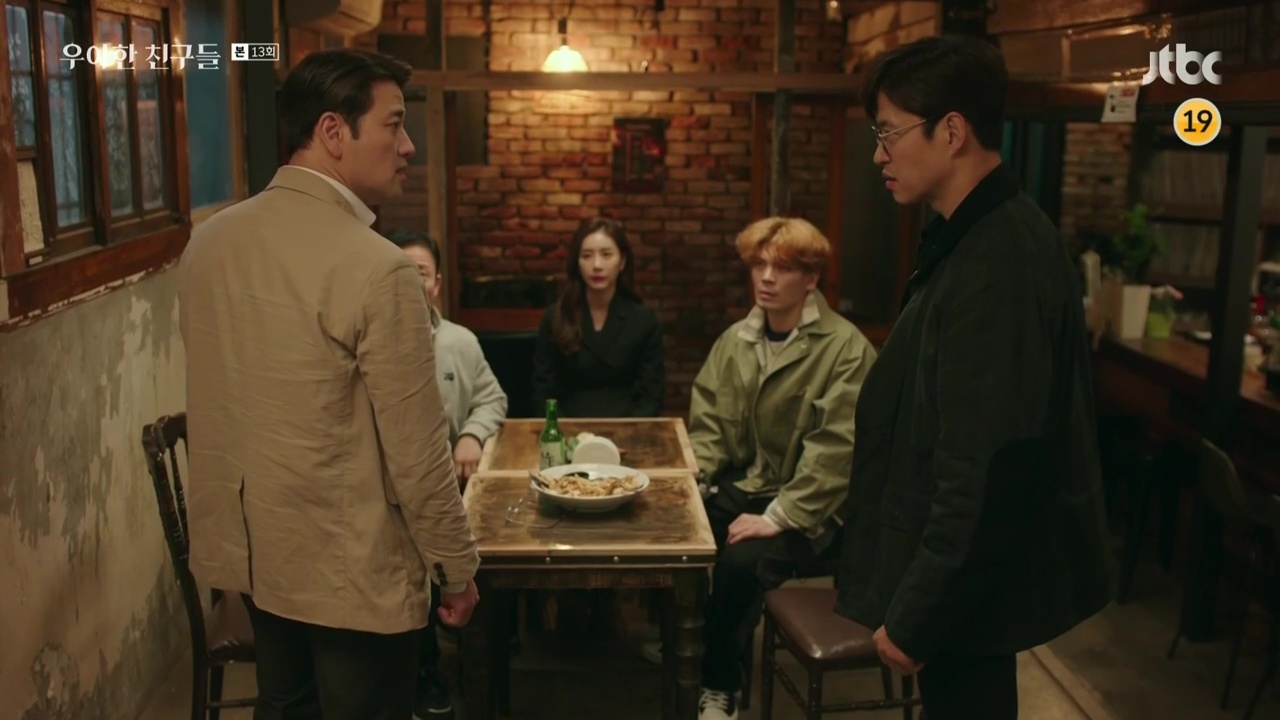 Goong-chul is on the war path, and heads straight for Jae-hoon, who he finds drinking alone at Hae-sook’s bar after being released from police custody. It’s an awful confrontation scene, but it’s somehow fitting that everyone is there. Jae-hoon is past trying to hide what he did, and admits that he hired Kang-san to break up Goong-chul and Jung-hae’s marriage; everyone is as shocked and horrified as can be expected.

With this horrible scenario out in the open, it’s kind of amazing how it breaks down the layer of artifice they’ve all been living behind. Hae-sook’s demand to know what really happened with the professor 20 years ago is met with a quick confession — and it feels natural for a group of friends who’ve just been blindsided to just release all of the secrets that they’ve been trying to live through and push past all this time.

Hyung-woo urges them all not to repeat past mistakes and put everything out in the open. So first, they confess that it was Man-shik that accidentally killed the professor, and talk about the cover-up that followed, and how it slowly ate away at each of them. Then, Hyung-woo urges Goong-chul to turn himself in for the murder of Kang-san. What! 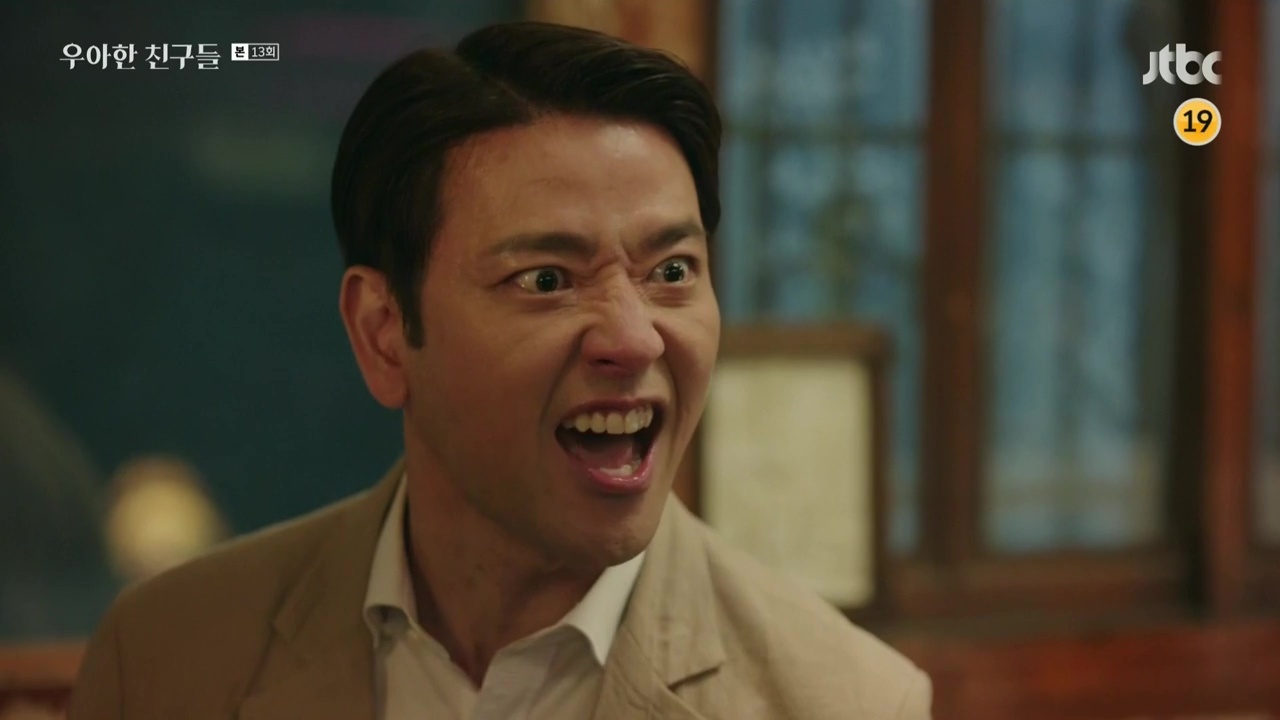 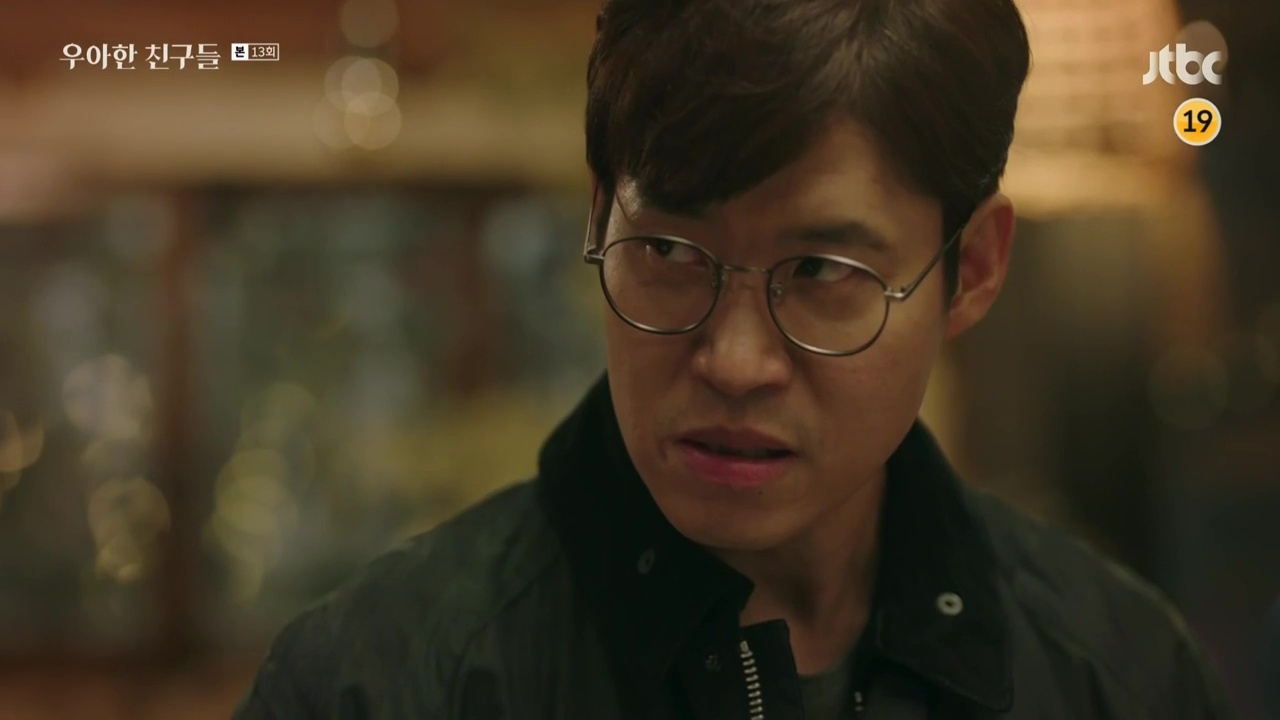 Both Goong-chul and Jae-hoon deny being the murderer, and all the pent up emotion and aggression come flying out. Jae-hoon is practically rabid, saying, “You married Jung-hae and rubbed it in my face. You acted like you were so happy, but nothing made me happy.” But there’s just devastation on every side of this thing. Then Jung-hae shows up, crushed, and tells Jae-hoon and Hae-sook they got exactly what they wanted. Uh-oh.

Whether they were truly as happy as they pretended, I don’t know, but something is definitely broken between them now. Jung-hae tells Goong-chul they should get divorced, and he doesn’t disagree. It’s not a debate or an argument; it feels more like they are trying to put themselves out of the misery they’re both in.

It’s not as easy as divorcing and walking away, of course. Both our suffering couple, and the instigators around them, still have a lot to work through. Hae-sook meets with Jung-hae and confesses that she’s terminally ill. The two don’t seem to see eye-to-eye on the past at all, with Jung-hae convinced that Goong-chul still loves Hae-sook, and Hae-sook broken because Goong-chul chose Jung-hae over her. If anything is certain, it’s that both women have held onto some serious hurt. 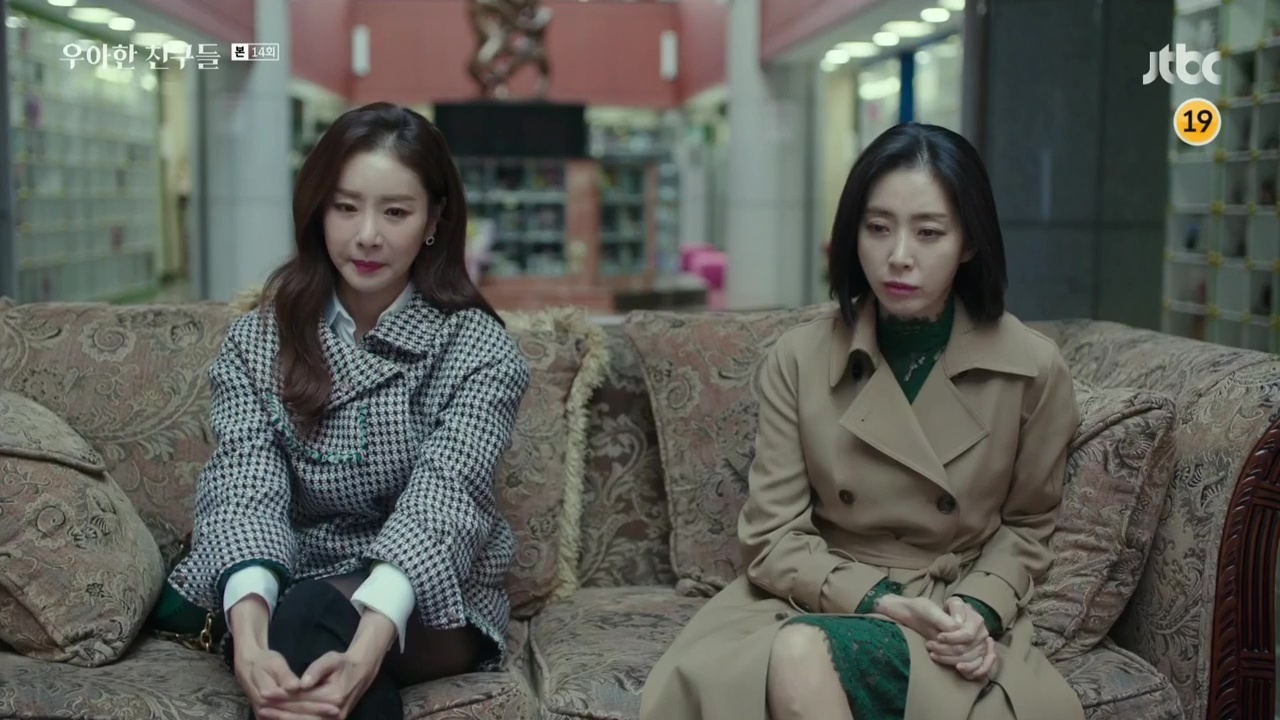 Similarly, Goong-chul and Jae-hoon have much more to talk about, and now that Goong-chul has less temper and more clarity, he seeks out Jae-hoon again. It’s even more heart-wrenching than the first fight, because it’s so much about losing the friendship between them, too. Goong-chul says (responding to their previous fight) that he wasn’t purposefully rubbing his happiness in Jae-hoon’s face — he really was happy. And how could he be blamed for a past he had no knowledge of? It’s really true, and that makes it all the more heartbreaking. Goong-chul tells Jae-hoon that what he’s done is unforgivable, and that their friendship is over.

But this is why I love this drama — even our totally evil-doing characters are so amazingly human. I am aghast by Jae-hoon, and his violence and hate, but we’re given such a look into his soul that it’s hard not to find his story completely compelling. We hate what he’s done, but it’s almost as if he hates it more. He looks more ready to break than ever. “I can’t forgive myself either,” he later admits to himself. 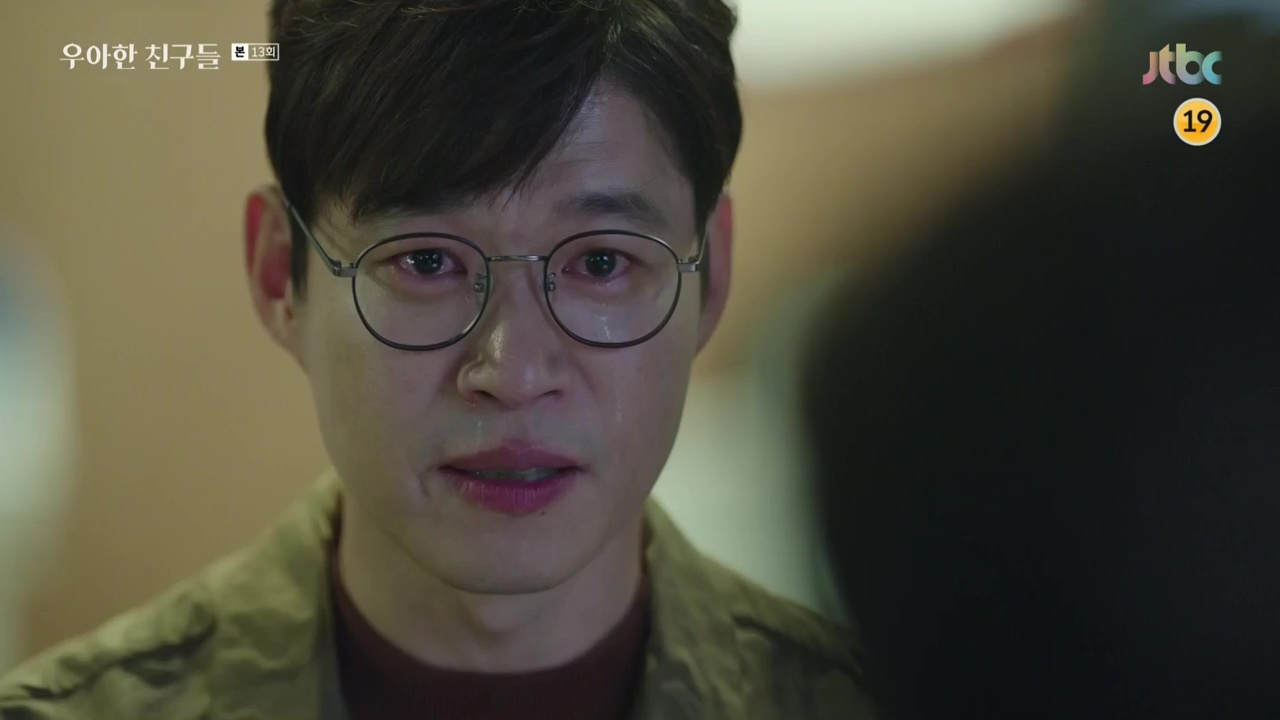 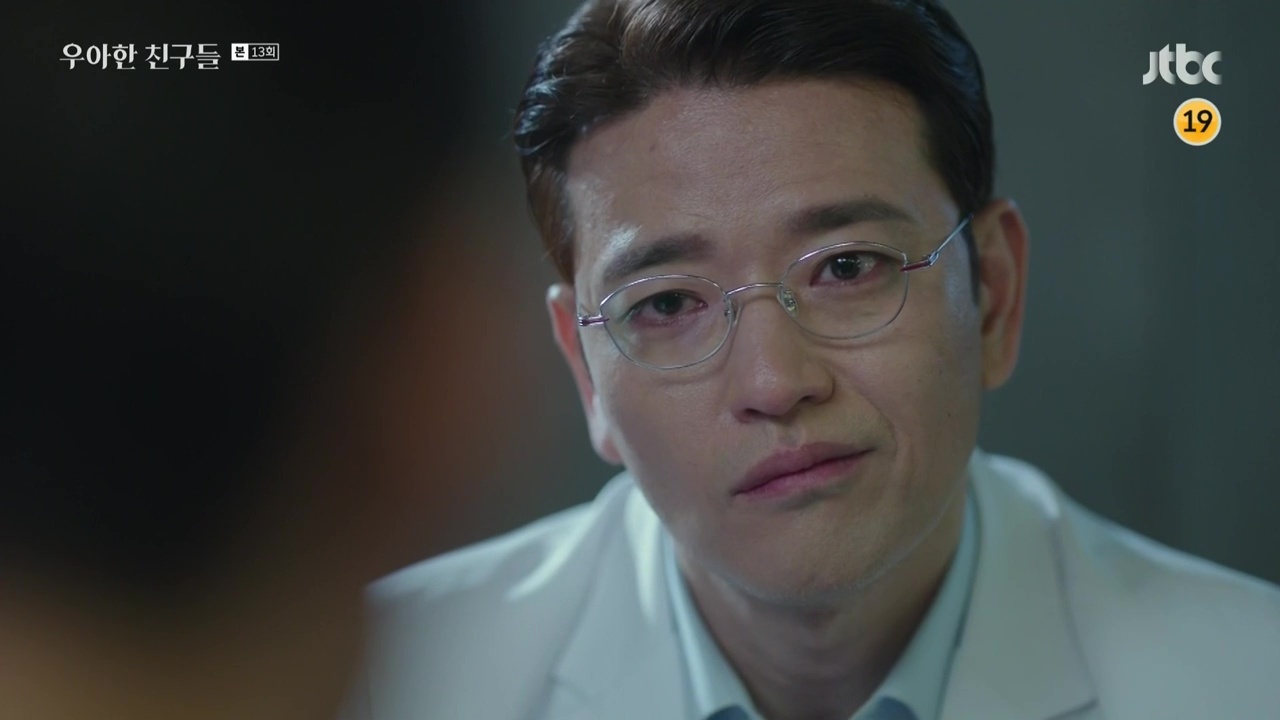 All this aftermath, and still there’s more drama to come, as Goong-chul and Jung-hae’s son Yoo-bin finally comes into the center stage. The treatment of their son has been tangential (and also a little odd), so I expected the plot to spin around him at some point — but I didn’t expect this.

Walking home one night, he’s hit by a speeding car that zooms off. Or does it? Jae-hoon suddenly appears on the scene, and immediately defaults to being a heroic doctor. He rushes over to save the kid, not realizing until he sees him up close that it’s Yoo-bin. He’s damn good in an emergency, and effectively saves Yoo-bin’s life. Jae-hoon even calls Goong-chul so they know he’s in good hands and on his way to the ER. 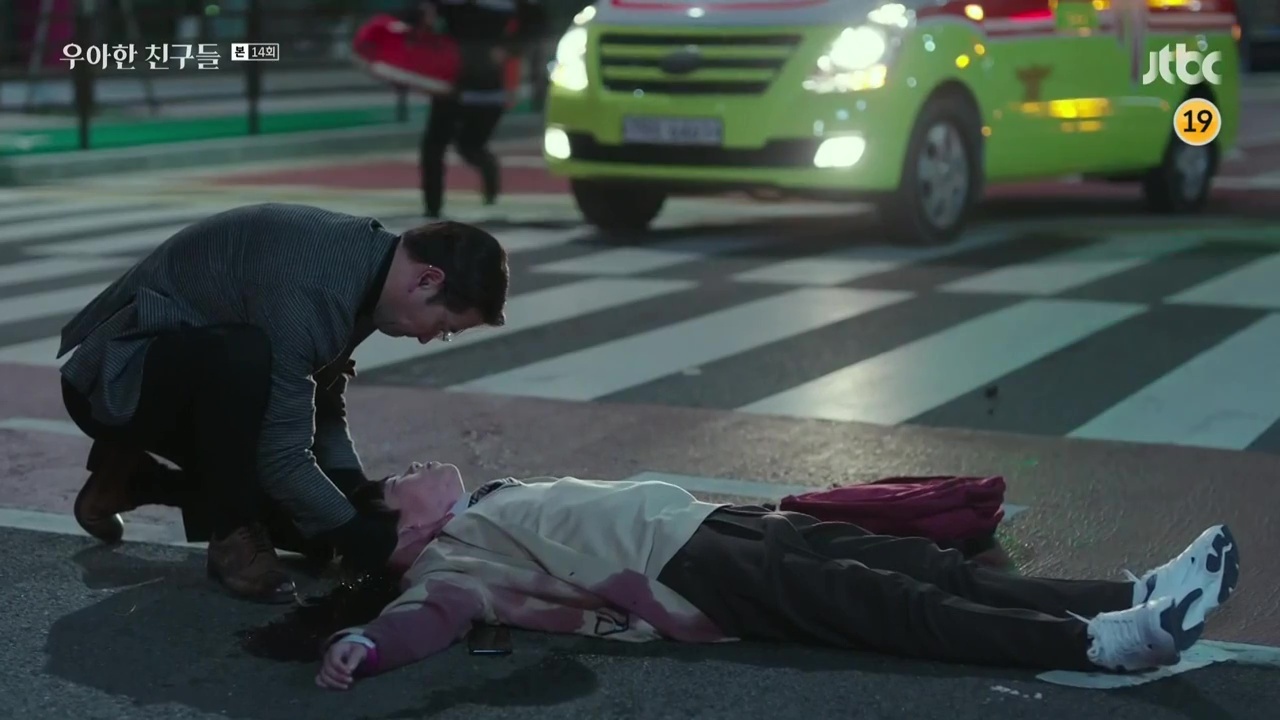 There is so much packed into this plot arc, through pretty much all of it is tear-your-heart-out. For Jae-hoon we have this man who’s done so much harm saving a child’s life and becoming a (momentary) hero. For Jung-hae, she’s utterly crushed, but a little more light is shed on her as a mother, and it’s quite poetic. This tragedy also brings Jung-hae and Goong-chul together, as crises often do, and they agree to lean on each other and focus on Yoo-bin for the time being. That’s the bright side, I suppose. Because the downside is an utterly broken hero.

We see a side of Goong-chul we’ve never seen before, and his agony and desperation are palpable — it’s incredibly acted by Yoo Joon-sang. Seeing Goong-chul brought to his knees by life (literally and figuratively) is enough to break down whatever plot it was that Jae-hoon had been clinging to. As our episodes end, we see him going to the police station and confessing to the murder of Kang-san.

This whole week of Graceful Friends has packed a serious punch, and even though the facts are out in the open, it’s still a pandemonium of emotional aftermath for everyone (including us). The drama shows no signs of lightening up, but with only a few episodes to go, there’s an awful lot of plot to wrap up. What will their world look like when we leave our friends behind at the end of this drama? I hardly know, but I can’t wait to find out. 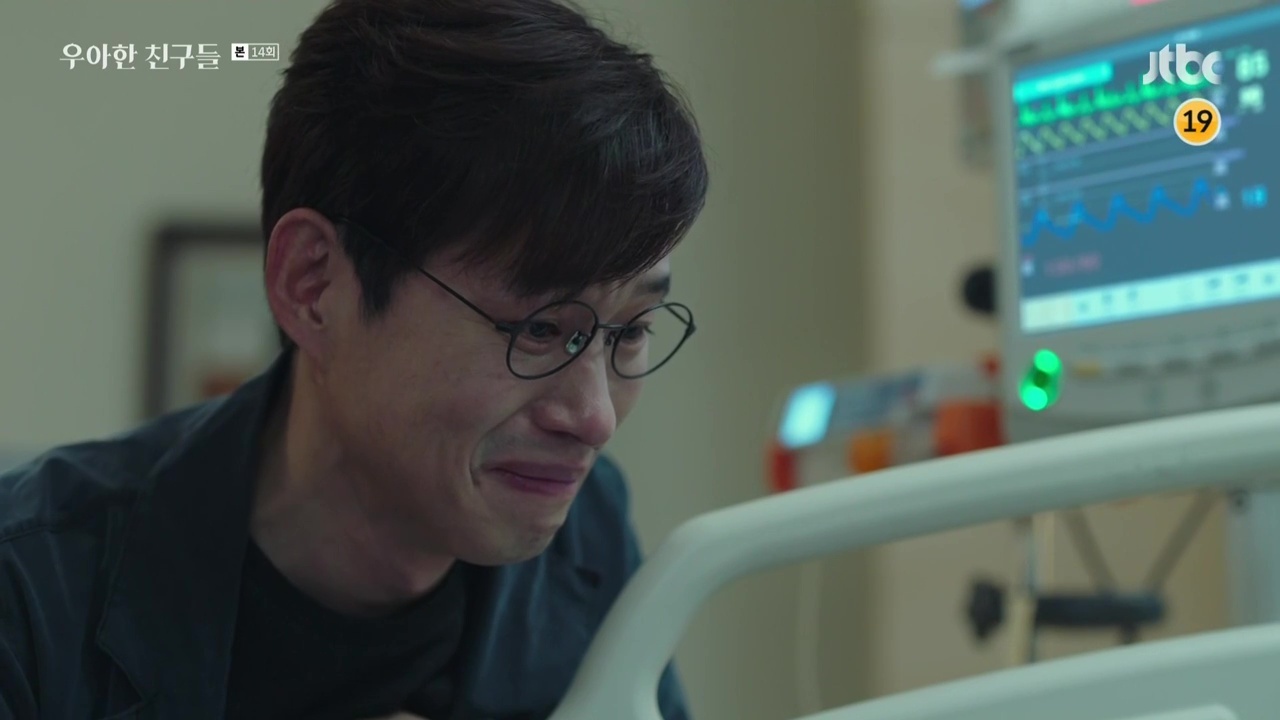 Thanks missvictrix for the weecaps :)
Graceful Friends is really dramatic in a sense and I'm really enjoying it so far. I thought it's ending this week but there are 17 eps in total it seems....

Thanks for this weecap, @missvictrix!

What? I still think that I bet that I didn't know what surprise for two/three final episodes strategy! It should be the last three episodes?! I told my guess for one of the last three was the special.

But in my good news, I still not dropped this thrilling show until the end, but we'll see for me if the last two/three episodes' mystery seems to be confusion.
On the other hand, I didn't know if this show's schedule might affect with the Tvn programming due to Covid-19 infamous tests of several Korean actors (including veterans) as possible.

Im so scared that Ae-Ra is Kyung-Ja's daughter (accidental pregnancy) thats why she is so against her son dating her. Eun-Sil is the cutest character, my goodness i love her innocence in this drama, and its definitely something we need.

Oops... @missvictrix,
that 15th episode of Graceful Friends will be broadcast on August 29. That today (August 28) was pre-empted by Night Debate on tackled about Covid-19 measures here in South Korea.

Oh too bad... that effectively kills the fun of the mysterious 17th episode.