Framed for the murder of her abusive husband, a woman is imprisoned for many years. The promise of seeing her young daughter keeps her going, but when she gets out of prison, she finds more lies and injustice awaiting her. She seeks revenge for these wrongs.

Framed for the murder of her abusive husband, a woman is imprisoned for many years. The promise of seeing her young daughter keeps her going, but when she gets out of prison, she finds more lies and injustice awaiting her. She seeks revenge for these wrongs. 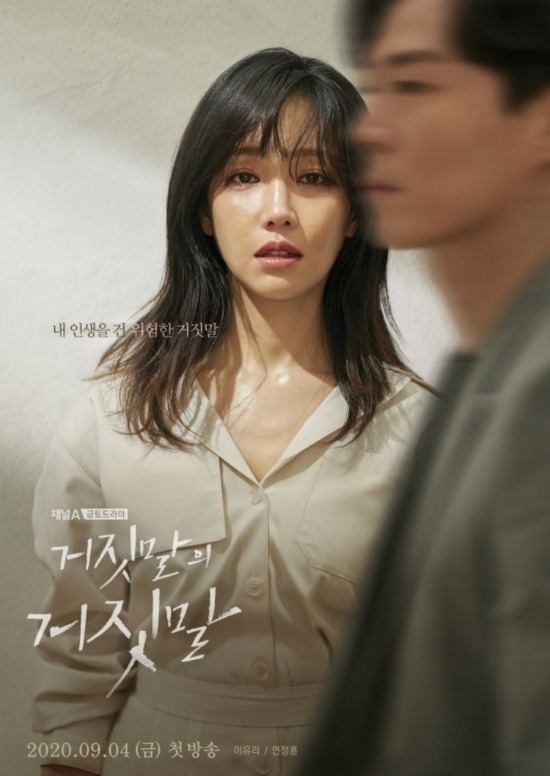 In upcoming suspense melodrama Lies of Lies, starring Lee Yuri (Spring Must Be Coming) and Yeon Jung-hoon (Posessed) has just dropped a new teaser. Lee Yuri plays a woman who once had everything, but lost it all when she was convicted of murdering her husband and was sent to prison. Upon her release, she learns that her beloved daughter was adopted by Yeon Jung-hoon, and she plots to find a way into their lives.

The recently released teaser shows her costar Yeon Jung-hoon falling for her, only to realize there might be something dark and sinister at play.

Lee Yuri meets Yeon Jung-hoon through several chance encounters. In one, she’s at an arcade and bows hesitantly as he smiles back. His daughter asks him: “Do you know that ajumma?” Then, there’s a typical drama moment where he saves her by twirling her to safety, away from oncoming traffic.

To his daughter, he explains that he’s seen Lee Yuri a couple times, but she always looked like her mind was elsewhere and he grasps for words. She completes his thought by saying that the ajumma looked sad.

The two of them have some quality father-daughter time as Yeon Jung-hoon narrates: “After that day, I thought just having my daughter was enough, but more and more, I feel concerned about this woman. My heart goes to her.” In the dark, Lee Yuri lurks and watches them. Copy appears around Lee that says, “She appeared out of nowhere, like a lie.” Some clips of the Lee-Yeon courtship is shown, and there’s a hint that a steamy night that ensued. The caption says, “I fell for a dangerous lie.”

Then the teaser grows darker as Yeon continues to narrate, “I’m afraid that all of this might be a lie.” He witnesses Lee, covered with blood, stabbing a man on the floor. The next thing we see is Yeon outside. Shocked and devastated, he collapses by a streetlight. His daughter’s voice asks, “Do you like her?”

This actor was so good in Mask as a villain, so I trust his acting in melos! Lee Yuri was also stellar in Jang Bo Ri is Here. I am so excited with this pairing!

Not only in MASK he was a really good actor but he is underrated you have to watch his drama Vampire Prosecutor 1 and 2. First like him in the drama East of Eden. Most of his drama are good quality and interesting to watch,. Can't wait to watch this drama.

he's been gone a long time! good to see him back. i loved the vampire 1 and 2 so i will be trying this although it looks kind of dark-----

This looks genuinely fresh and interesting, except for the tired "twirl away from traffic" bit.

Hmmm... I tried to do my best if I will watch this revenge drama.

I wasn't the most interested in this when the first couple teasers got released but this premise seems exciting!

It is strange that you talk about dramas that probably won't be included in the drama list on the right, just because they are not on the main channels.

Well, for the first time, even when a murder is involved, I am interested, because of the child. Wow!-how can a single man be able to adopt a child by himself???
Wow, wow, and how come the law wouldn't give her her daughter once she is free???
I am so curious I will, probably, be watching....

I find the premise interesting!

I prefer Lee Yuri in more comedic roles but I like both her and Yeon Jung-hoon and will probably tune in. I'm kind of in a melodrama mood right now.

This premise looks interesting but I would love to watch a light drama right now!

Looks like Lee Il Hwa plays a baddie mother-in-law. Will definitely check it out!

A must in kdrama Melos!

The good news is that there will be no availability angst for little Channel A’s LIES OF LIES. Viki has picked up and of course changed the title to LIE AFTER LIE. LAL is on its “Coming Soon” list with the note: “Available on 9/4/20”.
O/T. Viki has picked up a number of Channel A’s dramas over the years including recently CHEF MOON, TOUCH, and one of my favorites TWELVE NIGHTS.

Any idea if it is on Netflix?

No idea. However, I can't recall where both Netflix and Viki carried a live drama at the same time. It may have happened.

His role in "Possessed" gave me chill all-over (oh well, I dropped "Possessed" at the end because the horror was too much for me).

But seeing him so sweet in "2D1N", had me wanting him to play a non-villain role....

This actually looks really good! I've been wanting a change of pace after all my crime dramas (but please don't end, Flower of Evil!!) I may tune in!

Lol scratch that, I just remembered this drama also has a murder mystery and lies at the center. Why are my tastes so predictable??!

This is a big story pass/ fail from the beginning. Yuri kills her husband and goes to prison. OK. What happened to her or his parents taking care of their grandchild? Why did they give up their rights? What happened to Jung-hoon's wife so that he is a single father? Those questions needed to be answered quickly to move on to the stated story line.

I guess I am hooked!

Channel A has these under the radar shows that are very good. Ex. Love Affairs in the Afternoon was an underrated and incredible gem of a show. Cable channels trying to move their way up typically choose interesting and diverse scripts that are a bit out there. This could be one of those shows.

Also random: I would always encounter Vampire Prosecutor on MyDramaList, and I would always think it was Shin Sung Rok in it. So when I learnt it was Yeon Jung-hoon (Han Ga-in's hubby in rl), I was stunned b/c he looked super hot/edgier on the poster lol.