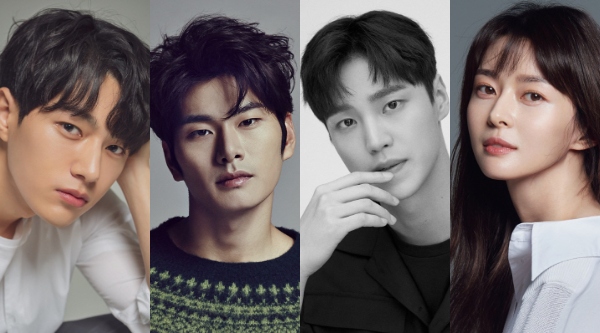 The drama is about how the Secret Royal Investigative Bureau fight to uncover crimes and fight against corruption to help wronged citizens. Think a combination of the FBI and the Secret Service that only answers to the king. They have a duty to guard the highest power in the country, a.k.a. the king, and they also have the authority to conduct investigations.

L plays a low-level administrative recordkeeper who, while lauded as a genius in his youth when he ranked first on the civil service exam, doesn’t have any goals or ambitions. When he’s caught gambling, his punishment is to join the Secret Royal Investigative Bureau.

The closest person to L would be his talkative, warm-hearted, crybaby servant, played by Lee Yi-kyung. Lee Tae-hwan has taken the role of L’s younger illegitimate half-brother. Due to the circumstances of their birth, he and L are natural-born adversaries.

Meanwhile, Kwon Nara’s character is a gisaeng with a beauty and vitality that rivals even the most celebrated women. However, her gisaeng identity is actually a guise she uses to get information for her real occupation as a damo, the historic equivalent of a female police officer.

KBS drama New Secret Royal Investigator, directed by Kim Jung-min and written by Park Sung-hoon and Kang Min-sun, will begin filming soon but no air date has been set yet.

I would be far more excited about this if L wasn't the lead. I am a Kwon Nara stan, I maintain she was the best part of Itaewon Class. L is a mediocre actor and he holds no special place in my heart, so he acting actually bothers me. Meh, I hope it is good because I also really really like Lee Yi Kyung.

Yup, I completely agree with you. Kwon Nara was the best part of Itaewon Class. L is not a good actor. Only decent acting he has done was in Angel's Last Mission: Love.

L could do a good job in ANGEL'S LAST MISSION because he had the fabulous Shin Hye-sun as his female lead- and her performance in that drama was positively luminous. I had hoped that he had fully absorbed his lessons from her but his performance in WELCOME was not encouraging. But given the rest of the cast this may not be too much of a problem.

Yup, Shin Hye-sun was a revelation in that drama. I became instant fan of her after that.

She played a much different character in THIRTY BUT SEVENTEEN, and was wonderful there too.

Sadly i also find L a so-so actor to put it nicely and would be way more excited if Lee Yi Kyung or Lee Tae-hwan had the main role as hands down better actors...Will still watch it because i like the other actors...

I only tolerate L in Miss Hammurabi, really liked that show despite him and Go Ara.
Not such a fan of the rest of the actors.
And the comedy - action - mystery reminds me of Good Casting and that’s not a good thing either.

Has there ever been a sageuk damo who HASN'T gone undercover as a gisaeng? I am surprised they don't issue a fancy hanbok and head piece as standard regulation along with the requisite headband. Not that the other sageuk cliches are ignored -- in fact, it seems the show wants to check all the boxes: "genius" protagonist, heir vs. illegitimate son rivalry, pile of mush/chatterbox servant and confidante (hero is not a royal so this character is not a eunuch). At first blush, i wonder if good execution would be enough to ave this one...

As a practical matter Sageuk Damos must be a fairly rare breed. And Giseang must be the 'role' that works best a far as being able to meet and interact with a large number of people- so this is actually a logical cliche.

Shows that use a lot of standard tropes can be very good- if the writing and execution are done well.

I understand your points but if logic is applied (surely, an imperfect proposition when Kdramas are concerned), it's not like there is a strict axiom that conspirators must plot and connive at a gisaeng house. I may not be well-versed in Joseon social mores but common sense dictates gambling dens, market places, eateries and inns can be infiltrated and are good places to pick up information, illicit and otherwise.

That is right- and a Giseang would be far more likely to be accepted and be free to move around in those places than most of the other women of those times.

This is a good role for Lee Yi-kyung. Hopefully he can help L deliver a good performance. Kwon Nara is also a plus for this show. I will give it a try when it comes out.

I would have been more excited had Lee Yi-kyung been the lead and L his servant. :(

OMG same, like I liked L as an idol but he still is ways from being a good actor

Amen- particularly since he actually has experience in the police investigator/detective role in CHILDREN OF NOBODY- where his performance was both noteworthy and convincing.

L is still coasting on his performance in ANGEL'S LAST MISSION- but that good performance was drawn out of him by his co-star (and a good director too). In fact, ANGEL'S LAST MISSION was quite remarkable in another way - Good acting, cinematography and direction actually created a good show out of a horribly flawed and internally inconsistent script.

Weird that 3 out of 4 leads were/are from idol groups though.

I'm excited for this. I love historical+comedy+mystery is my jam combo. I do hope Lee Tae Hwan isn't like some big bad or anything. Like can't he be a frenemy or an enemy who eventually joins the group to fight off some other big bad?

I know he can nail it, it's just that he already played a funny secondary character in Waikiki. I wanted to see him take on a bigger role than a sidekick. Hopefully you're right and this will be an exciting drama.

I would have been much happier had Lee Yi Kyung chosen another serious drama instead of a comedy. He was wonderful in Children of Nobody.

Tho I'm not averse to seeing him in another comedy

He gave a good performance in the non-comedic CHILDREN OF NOBODY so he is not limited to comedic roles (which are actually harder to do). But, that being said he does have real talent for comedy and I hope he does get more lead roles in that area.

i am emotionally drained after FLower of Evil and need something light and fun so this is welcome for me. and Lee Yi Kyung will not be forgotten---bet he will get another lead role in something that fits him

One bit of casting that caught my eye is Lee Tae-hwan. I thought he was terrific at age 19 in PRIDE AND PREJUDICE (2014/15) (5 stars). I have only seen him in one other drama: W: TWO WORLD APART which I enjoyed. I am looking forward to seeing him in NSRI.
I see that he has sageuk experience being part of the cast of HWAJUNG (2015) right after P&P. I have not seen it and at 50 episodes I probably won't get to it.
Any comments/memories of LTH's performance in HWAJUNG?

I haven't seen HWAJUNG. Looking at the cast on asian wiki, I see that he played the role of young Prince Gwanghae, so maybe he only appears in the first few episodes and not all 50?

I somehow dropped all other dramas with Lee Tae-hwan, but the web drama THUMPING SPIKE is my guilty pleasure (also starring Song Jae-rim and Hwang Seung-eon).

Toki, I am surprised you are not a P&P fan.

I haven't watched it! It's on my list though.

Highly recommended and available at Viki and Kocowa.

He was in What's Wrong With Secretary Kim as the brother of Park Seo-joon's character. That role was pretty flat IMO. He's also been in Graceful Friends, which I haven't watched.

Sigh... Lee Yikyung was probably better in that Hotel Del Luna faux sageuk cameo than L will be in this entire sageuk.

I’m also not that fond of Nara and Lee Taehwan, so the likelihood of me giving this a miss is high :(

Am I the only one here wondering why Cat, L's furry doppelganger in the aptly-named MEOW THE SECRET BOY isn't acting in this drama? @bbstl's cat is not pleased, I can tell you that.

The cat population is woefully unrepresented in the current crop of dramas. Something needs to change in the industry, to reflect the true picture.

And, in case you think I am exaggerating, I would have you know that I consulted my neighbour's tabby cat, Tabs, and its distant cousin, Alley, and they are NOT happy as well. @eazal is nodding in approval. @wishfultoki and @leetennant feel as strongly as I do about this. And @ndlessjoie, @poliwag and @diana-hansen, are equally passionate about this meowst troubling issue, when they are not otherwise preoccupied with debating the (non) existence of hair follicles on SSR's kairostic chest.

Sorry, I dont know how to make this show up as a graphic:

true that! my 2 cats are in complete agreement. they might even start a union for fair and equal treatment of cats in dramas! how many hair follicles have been found and who got to be the counter? please say NONE!

I love most of this cast! A must watch for me!

Sageuk you say? Emm...I don't know~
I just finished "Tale of Nokdu" 2 days ago (I know..late) and I'm having very much intense JDY withdrawal since then. Actually No! I was in crisis WHILE watching the show too. Like I always say, Sageuks are dangerous for fangirls like me...😄

but this is a comedy so it should be fun!

It's no fun when you fall for the guy HARD!! You know how I know this??? Because it's a freaking SAGEUK!! BECAUSE IT ALWAYS HAPPENS TO ME!!! 😭😭

L is one of the worst actor I've ever seen if not worst & yep I said this after I saw his performance on ALM.
His acting on Angel Last Mission was painful to watch, nothing natural in his acting, it's either dead pan face or exaggerated everything, nothing in between, he can't barely running like a normal person would be.

Fom all the casts he's the weakest yet he's given the main lead role?
I shall pass then, will watch it only if he wasn't in it.

this sounds so fun! hope we don't have to wait too long for it to air. i like all of them so it will be a fun ride. i think L is improving every time he acts and his last one was bad for me cause the story and execution was bad.

Lee Tae-hwan again as younger brother, jeleous of his older brother. (Or was he the older one? I don't remember much of his character in WWWSK). L's character sounds like slight variation of his character in Ms Hammurabi. I am in mood for light-hearted show, I will give it a chance for Lee Yi-kyung and Kwon Nara.

Yesssss! Could really use a laugh these days :/ I also feel like there are less historical drama these days...a shame because I love how vibrant they are (some of my favorites: https://youtu.be/SbprERsC_A0)

Looking forward to this one! Its a dolid lineup 💕