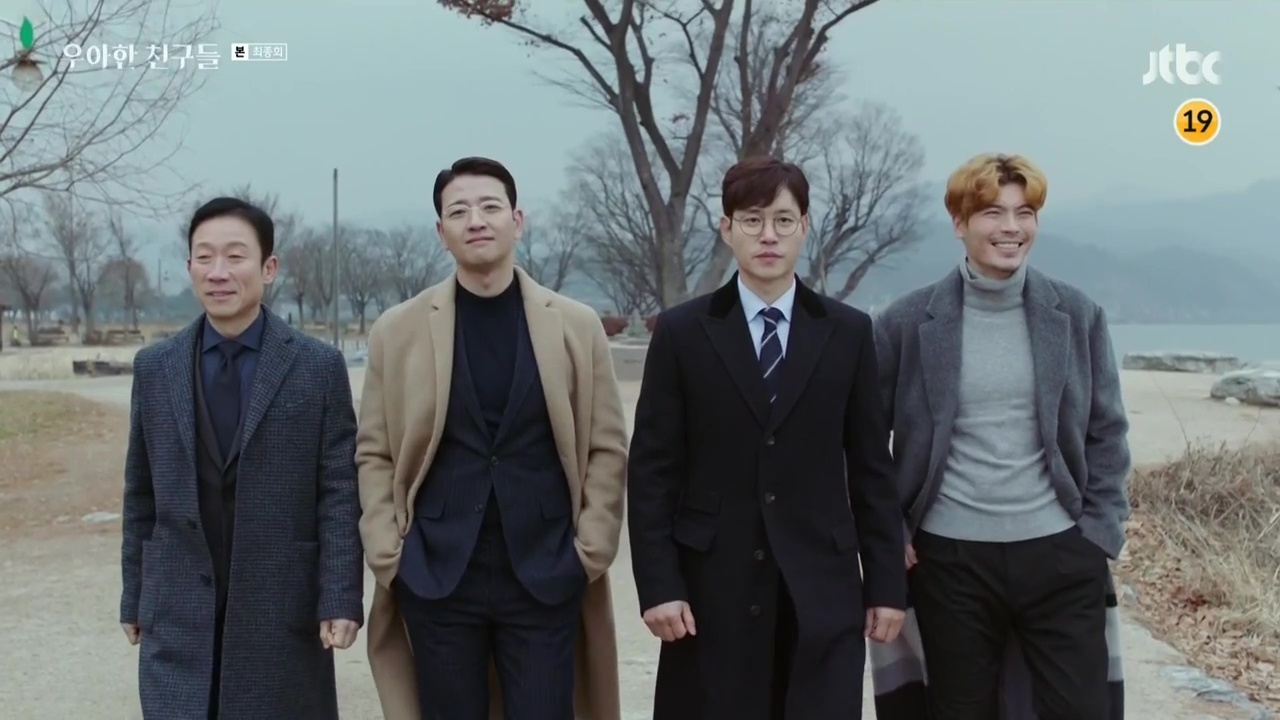 Graceful Friends finds its conclusion this week, and it’s every bit the grand finale, with meaningful wrap-ups, final battles, and a few gigantic twists. In the spirit of the show, nothing is as it seems at first, but everything comes down to the relationships between our characters, and in the end, the power of friendship. 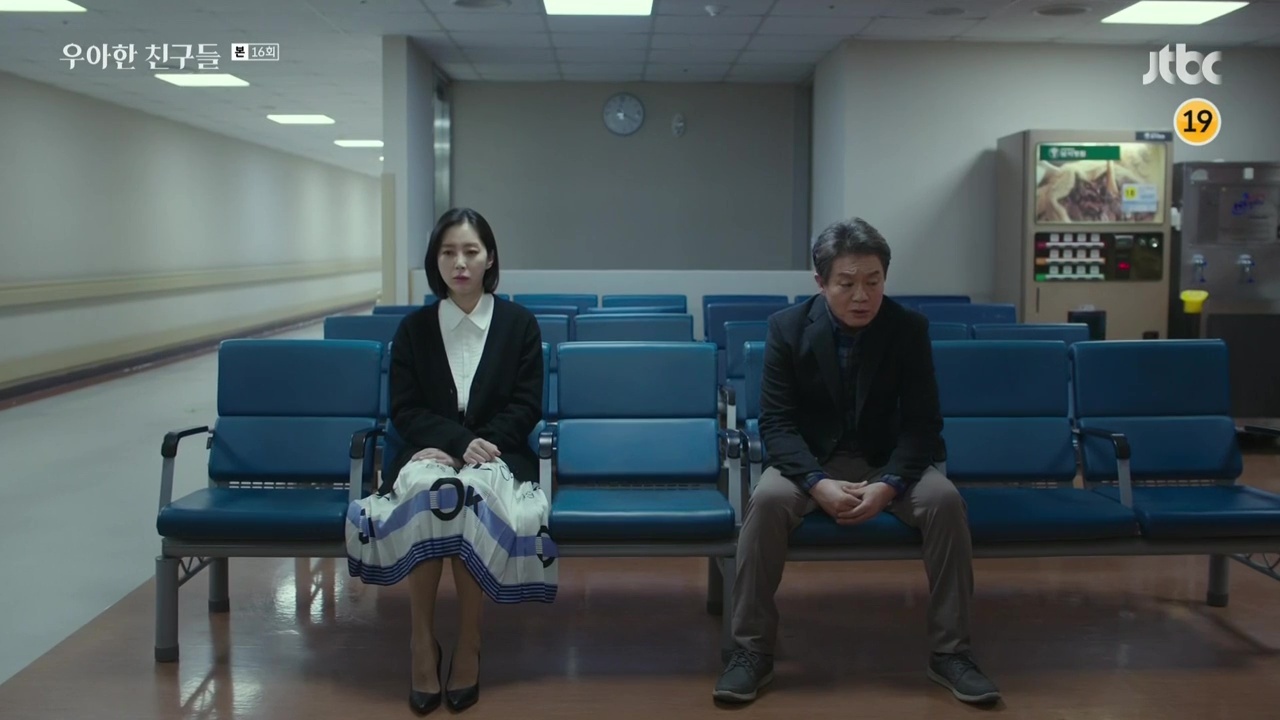 There’s so many great plot arcs to be wrapped up this week — I’m quite glad that Graceful Friends was set at an interesting count of 17 episodes from the start, because we definitely needed each one of them to finish our story strong.

Last week we were left with a lot of questions — the main one being where the evidence around Kang-san’s murder actually went. That question is quickly answered as we follow Hae-sook’s meaningful farewell to Goong-chul, and soon after, her departure from this world. Our friends (and investigators) hear that she’s been cremated and, illegal though it is, her personal belongings have been cremated with her: a trophy, a cell phone, and a pair of red heels. 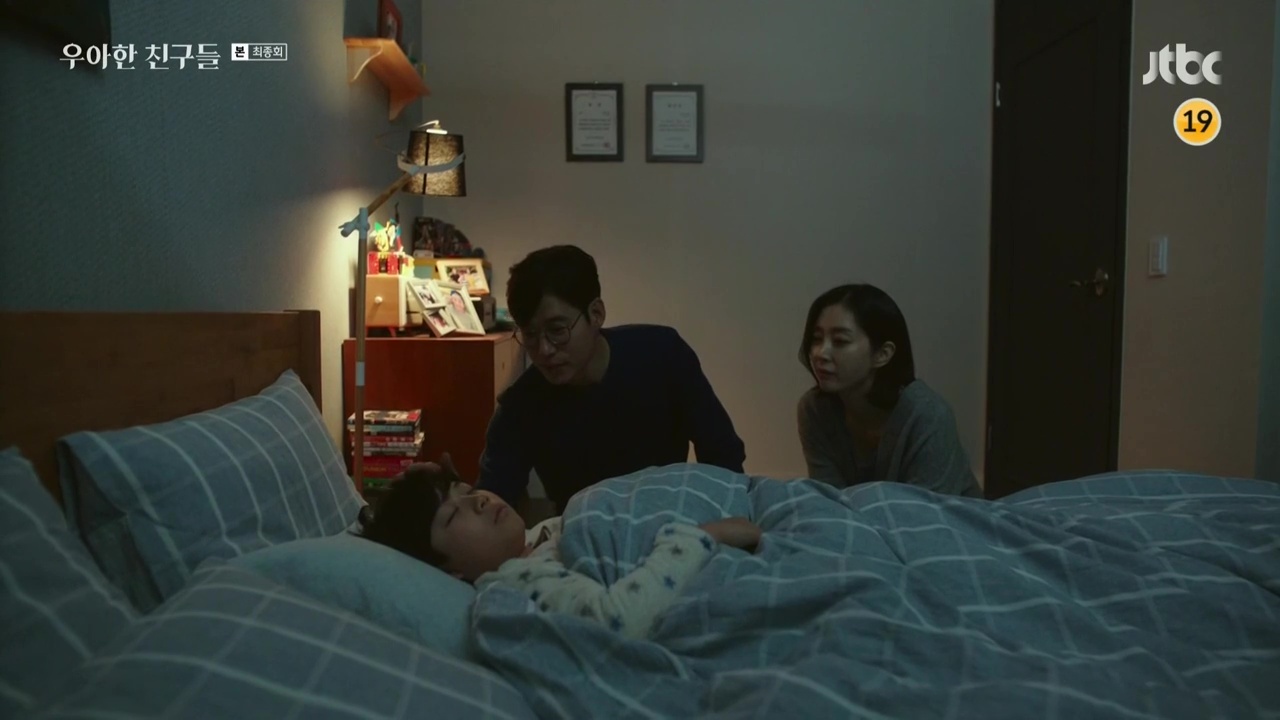 With the physical evidence destroyed, the murder case is officially at a dead-end, and our characters are forced to continue on with their lives without any real kind of closure. But is this a bad thing? Jung-hae and Goong-chul, both saying they feel “reborn” after Yu-bin’s recovery, agree to put the past behind them, and to accept the “gift” that Hae-sook offered to them. That gift was, according to her letter, her way of protecting her friends after they all did the same thing for her 20 years prior.

Of its many strengths, one of Graceful Friends’s greatest was that each character was so completely human and understandable. Though the drama chronicled some terrible things, from actions to emotions, by the time the story wrapped up, we were essentially left without a villain. I love stories that are strong enough to do that. 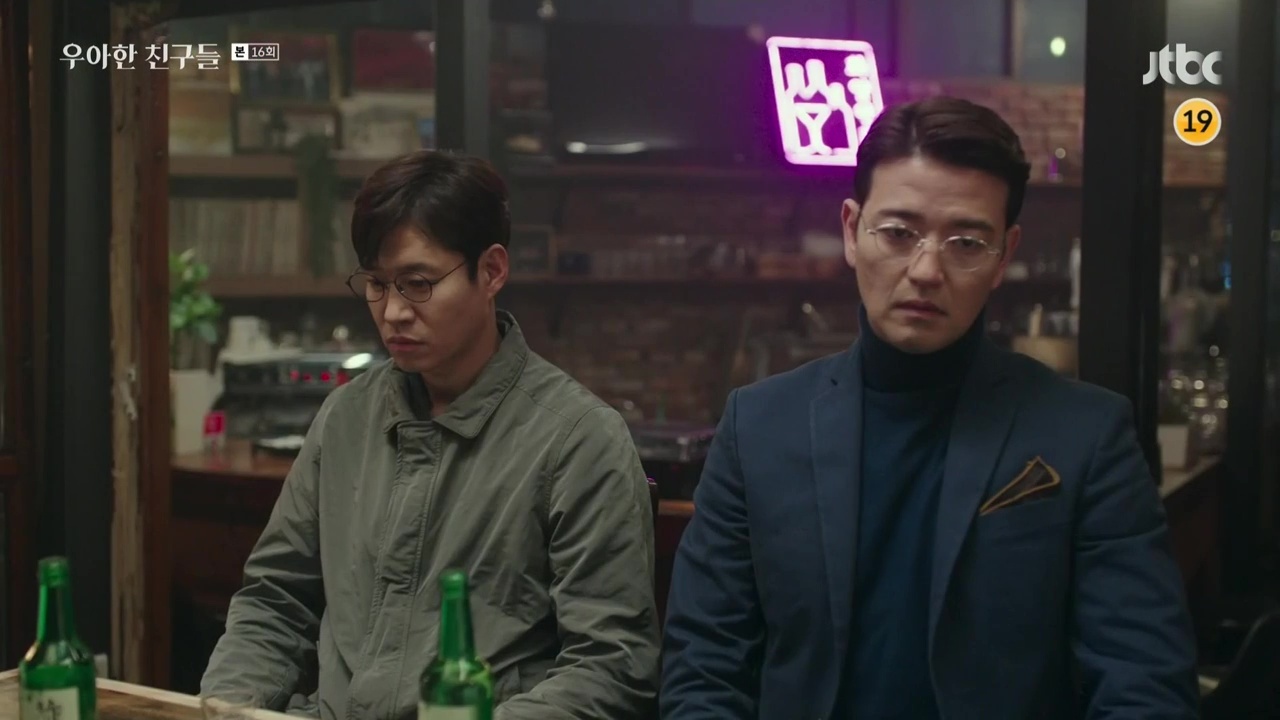 We watched Hae-sook redeemed in the drama’s penultimate week, and this week, we travel the same path with Jae-hoon. His character has been handled so well from the start, and even down to the last episode, I was never exactly sure if he was indeed the murderer. Even Goong-chul asks him once if he just “put on a show” for the police, knowing that the evidence to convict him had disappeared.

In our final episode, we again return to the scene of Kang-san’s death, as if to confirm to us that the murderer was Jae-hoon. But it’s so like this drama to leave just enough questions while it’s also feeding us information. In the end, we’re only really sure he’s guilty because of the depths to which he sinks. Unable to take accountability for his crime, the man is more of a mess than ever — and it just turns out that this is the punishment that Goong-chul wants for him.

In one chilling twist of a moment I was hoping for, Jae-hoon’s ex-wife whispers in his ear that it wasn’t Hae-sook that took the evidence after all. No biggie, just another brilliantly handled moment from this show that effectively makes us rethink everything we’ve just been convinced of. 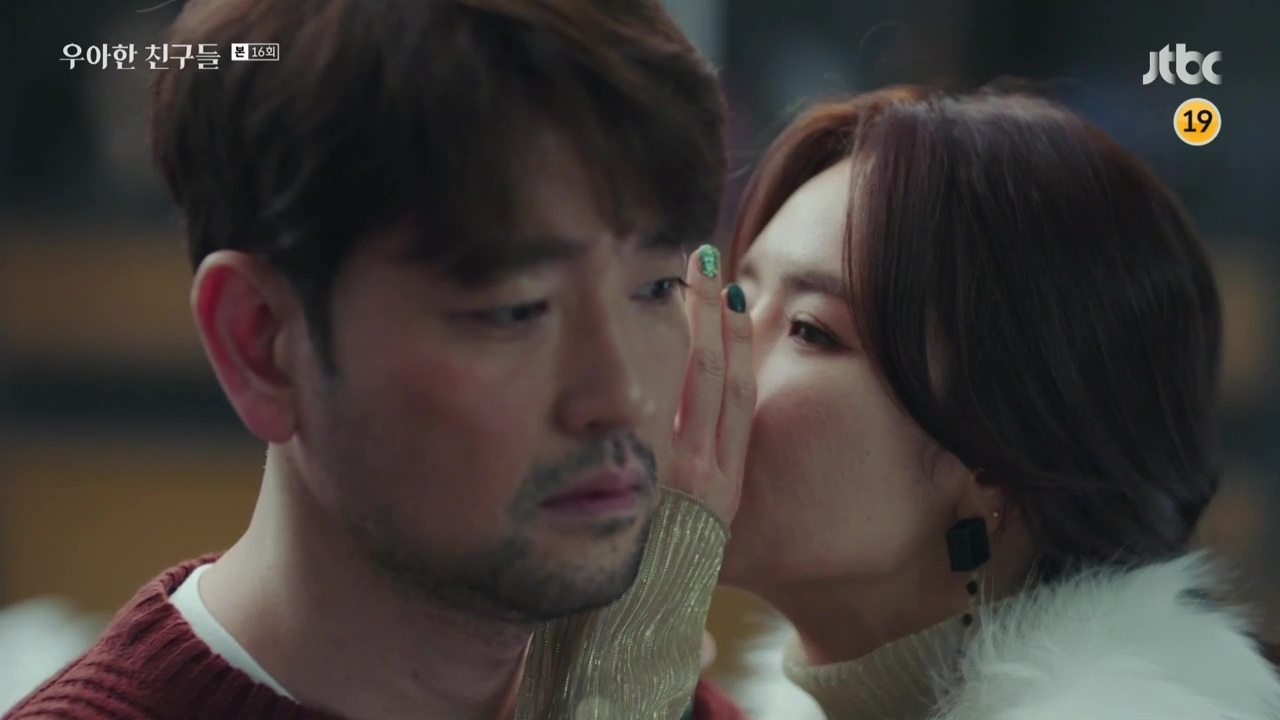 Not to neglect our other characters, each of the side plots was really nicely wrapped up in our finale, and with quite a bit more attention than I was expecting — from Chun-bok’s wife finding out about his dementia, to Kyung-ja’s unique way of welcoming Ae-ra into her family, to the closure Kyung-ja was able to provide for her husband. So many of our stories came full circle, and we’ve watched our characters come face to face with the past they were trying to forget, whether it was regrets, decisions, or the incident from their college years.

It is so like this drama to be busy wrapping up plot lines and giving us closure — and then just when you were getting comfortable, to yank it all away. In Episode 16 it was the reveal that it wasn’t Hae-sook, but Goong-chul, that hid the incriminating evidence. For Episode 17, it led with the feeling of a new start for everyone (Jung-hae as a mother, Goong-chul and his pals running their favorite neighborhood bar, Jae-hoon completely ostracized) — and then this sucker punch of a scene that took it all back. 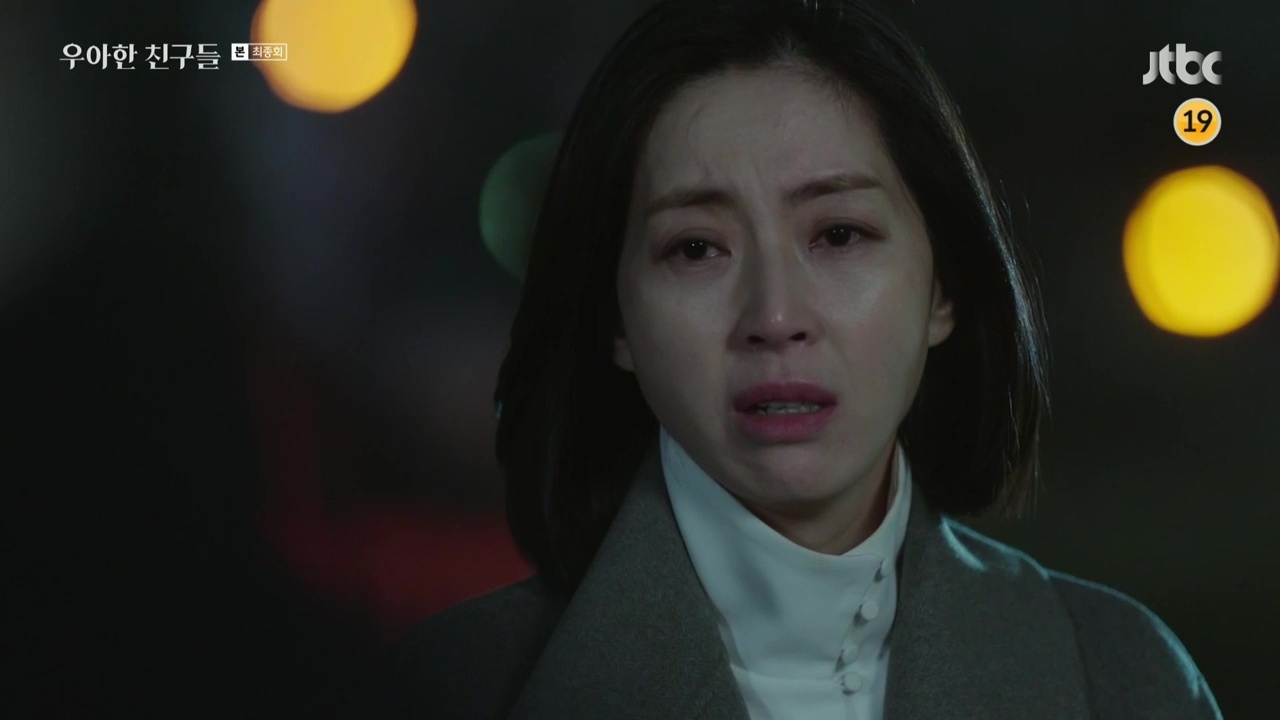 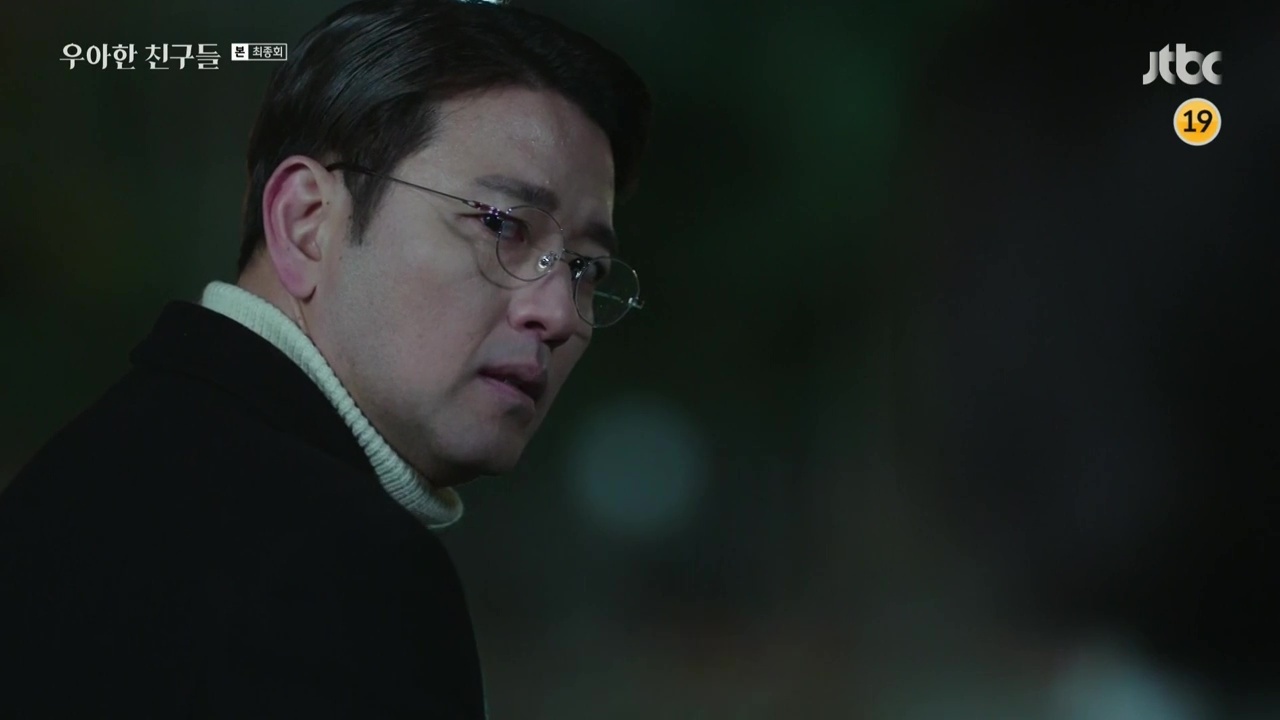 Jae-hoon, walking alone at night after leaving the bar, is suddenly and brutally stabbed by Kang-san’s escort friend. Shocking stabbings are not a new plot device by any means, but Graceful Friends really handled this so well. It’s the most dramatic scene on the planet, and yet absolutely full of subtleties and subtext.

Jung-hae happens to see Jae-hoon just moments after the assault, and walks over to greet him and thank him for saving her son. He quickly hides his wounds and manages to have a final conversation with her before hobbling away. What sends her after him when they’ve parted on bad terms yet again? Either way, she’s banging at his door and knows he’s bleeding out. Simultaneously, Goong-chul and friends are at the bar, and Goong-chul is singing that gorgeous song Hae-sook once sang there. It’s such a well-edited sequence — you don’t want to tear your eyes away from the screen. 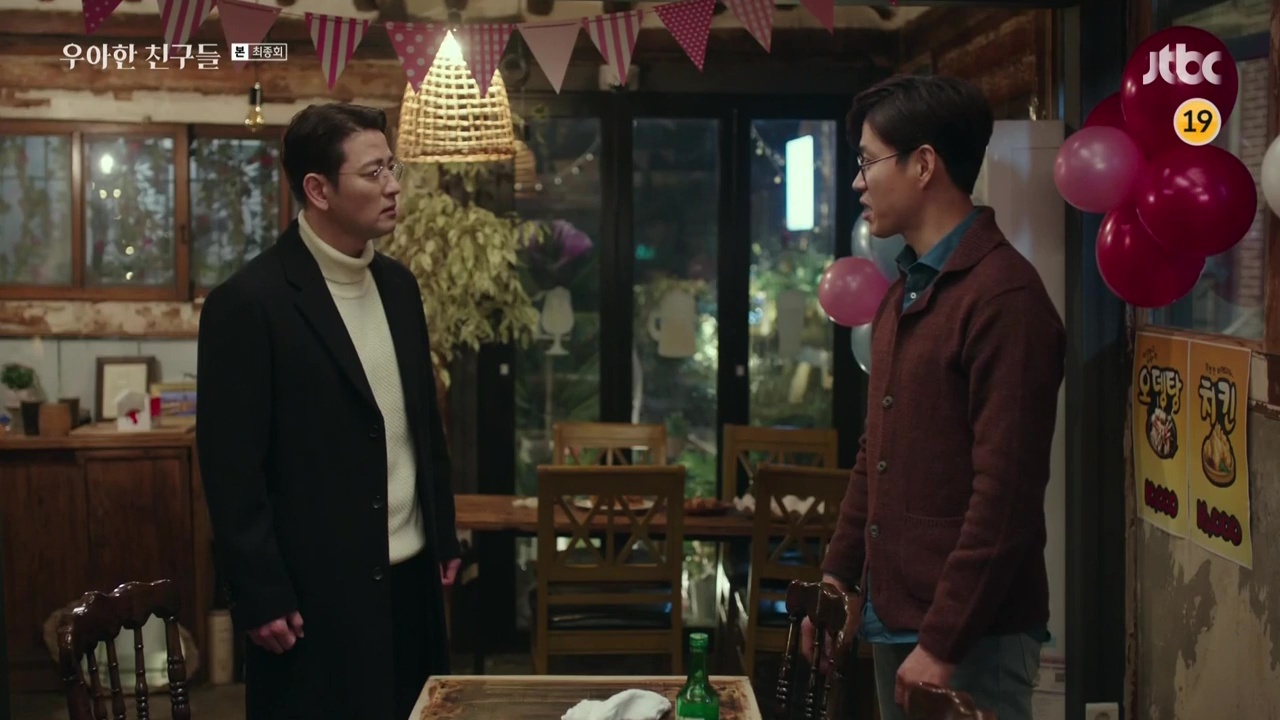 The drama keeps pretending to wrap up with these meaningful scenes, but then keeps circling back to us with more tricks in its bag. We’ve taken a month-long jump to see our friends after some of the mayhem has died down, but nearer to the close of the drama, we take another three-year jump. So much has been resolved, but so much still lurks in the background.

I could write a novel about each of these characters and all the nuances that we are left with at the end of the drama. Who asked Hae-sook to pretend that the evidence had been burned at the crematorium with her body? Why did Jung-hae sign for the release of Kang-san’s body and effectively steal it? Why was it not until after the three-year break that we finally see Goong-chul getting rid of the evidence (trophy, phone, heels) by dropping it at the bottom of a deserted lake? 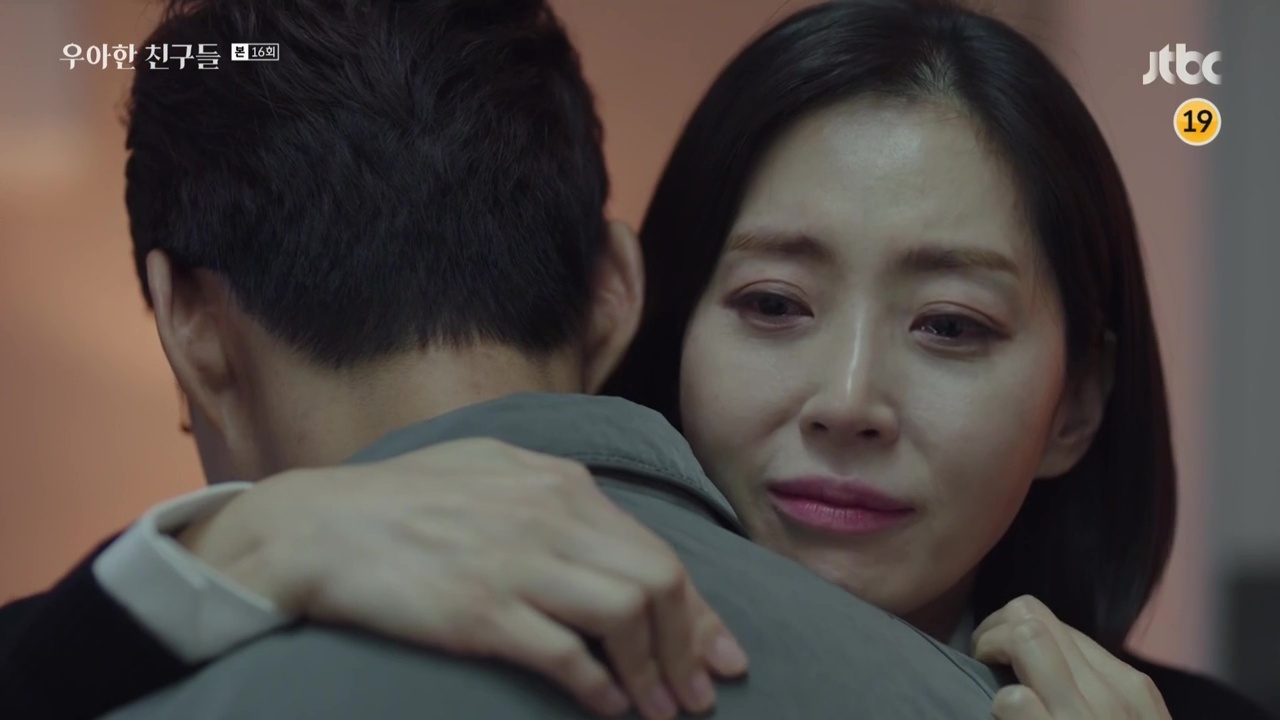 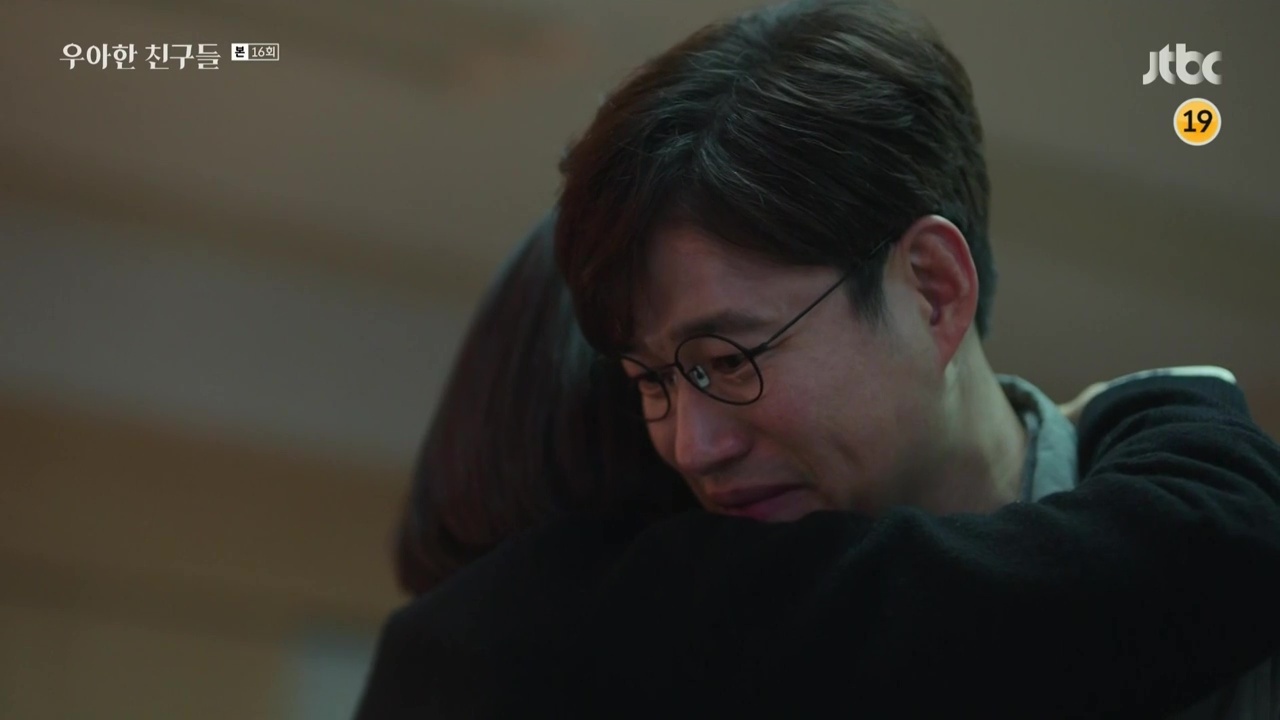 I’d never actually met a drama that did such a great job tying up plot lines, and yet left me with so many questions, all at the same time. That’s a compliment, though — Graceful Friends had great execution from start to finish, and did everything — and yet nothing — by the books.

Much of the drama’s success relied on the mechanics of showing us a scene, and then later, showing us more of that scene, and completely reimagining what we thought we knew. They do this at the close of the drama, too, as we take one final look into our friends’ college years. We see that while it looked like everyone was head over heels for Hae-sook, it was actually Jung-hae that was at the center of Goong-chul and Jae-hoon’s attention from the start.

Though much is revealed, much is left as a question mark. But the ending we settle on is one I’m quite happy with, and it echoes the words of Kyung-ja, musing that “some people say friendship is greater than love.” The truth of that statement, and the many ways it plays out, has been at the core of our drama. And so, we end where we started: with a group of friends that journey through life together, no matter what they encounter along the way. 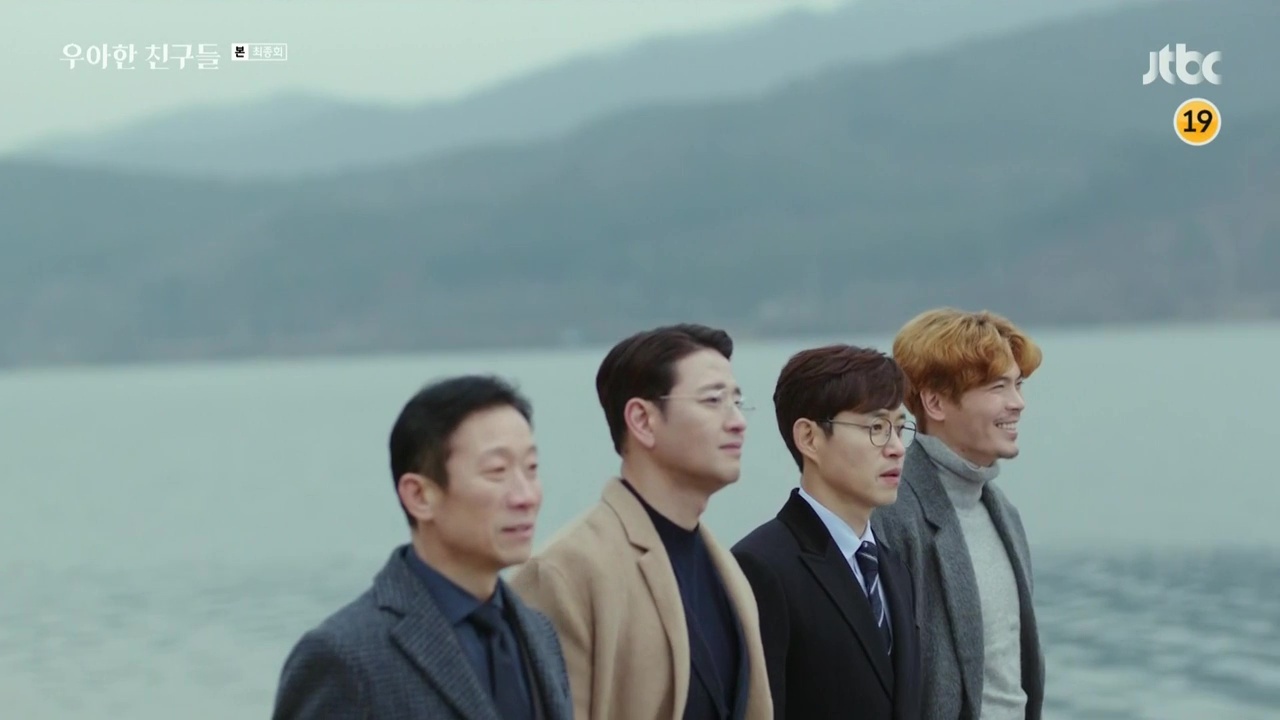 Thanks @missvictrix for being my purest fun of this show! :)

Sorry to ask this. So who murdered that evil stalker, date rape dude from ep 2?

Thank you! I left the drama and only read recaps and clearly lost that point somewhere. I thought they left it open ended or something.

Sometimes this reminded me of a movie I once saw! A group of criminals and trusted friends, plan things together and accuse one person for a crime and then when police investigate they can not prove it or stories conflict etc. etc. and then everyone goes free.

I really don't understand why Jung-Hae stole Kang-San's body and what she did with it. Does anybody have any plausible theories?

Also, was Goong-Chul the one that saved Jae-Hoon by donating blood to him? Is that what he meant at the crematorium when he said they share the same blood? Meaning Goong-Chul was able to forgive him despite him vowing not to.

Ya I have no idea what she would do with Kang San's body. Perhaps it's her way of burying the past? So there's no way detectives can reopen the case in the future?

Yes it seems like blood was donated and all was forgiven. Though I wish the ending was slightly different in that Jae Hoon could have actually paid for his crime, gone to jail and then rejoined friends. I wish they had not repeated the same cover-up mistake as they did with Mansik and the professor

I enjoyed this show immensely. Just a bit sad that it's not as hyped up as other JTBC dramas like Sky Castle or The World of the Married Couple.

hey does anyone knows what song that is used during the bus scene (when the young goong chul sees young jung hae crying in the bus) ?

Thank you so much @missvictrix for this weecap :) I thoroughly enjoyed this drama with all it's twists and turns although some of the questions I was left with did bug me for a while but hey that's life....we don't always get to know the reasons for everything :p It was good to see some of these actors in main roles when they are usually playing support characters....my only gripe is that there was not enough of Kim Won Hae's character.... I love his acting :(

Watching Jae Hoon bleeding out on the floor, leaving us with the impression that he died in that scene gave me a slight "City Hunter" ending flashback ("Noo...he died in front of us..but then oops...there he is again at the end?"). Jae Hoon's fake death-throes was my least favourite use of the 'delayed information trope/trick'. It worked okay when the writer kept moving around the bag with the incriminating murder evidence in order to place doubt on everyone, (although because the writer kept repeating this sleight of hand so often, I had suspended my belief in anything I saw by then, which weakened the great tension that the show had been leading me through). But when all is said and done, our four friends were the drama's centerpiece and who doesn't love a reunification story? My favourite people were the side dishes... the strong-hearted, nurturing Bar owner and her struggles with a dense immature husband, and I loved the super-plucky wife who loved her older husband unconditionally and didn't hesitate to pitch in and support him when they both learned about their dimly-lit future. These layered characters won my heart more than the love triangle between the male leads who were obsessively and inexplicably drawn to the very chilly charms of Jung-hae, whose reclamation came a bit too late at the end for me.