Lovestruck in the City

Two characters meet and fall in love one summer on the beach, but when the woman bolts, the man is left heartbroken. When they return to the city, the two struggle to reconnect and commit to one another, and have to come to terms with their relationship baggage.

Two characters meet and fall in love one summer on the beach, but when the woman bolts, the man is left heartbroken. When they return to the city, the two struggle to reconnect and commit to one another, and have to come to terms with their relationship baggage. 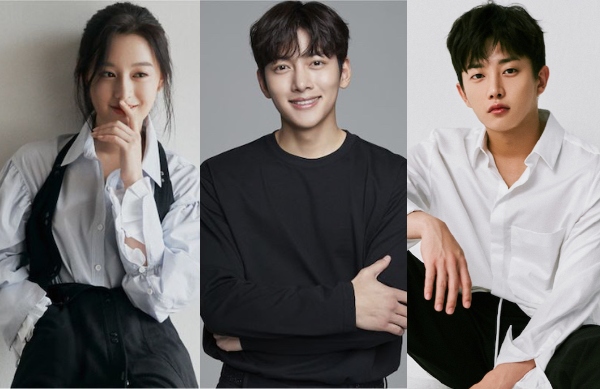 There’s a new drama, called City Couple’s Love Method, on the horizon. Ji Chang-wook (Backstreet Rookie) and Kim Ji-won (Arthdal Chronicles) are headlining this project, and Kim Min-seok (Because This Life Is Our First) has recently announced that his post-military small screen comeback will be with this drama.

City Couple’s Love Method shows the realistic romances of youths living in the city. Because of their hardships and the complexity of city living, they have to fight in order to succeed. It’s being planned as a multi-season show, and the first story has been titled “My Lovely Camera Thief.”

Ji Chang-wook plays an honest, warmhearted, and passionate architect. He’s the type of romantic who can love and be nostalgic about the friendly alleyways of city neighborhoods. His hobby is collecting more hobbies, because he approaches everything with an overwhelming passion.

Kim Ji-won’s character is a freelance marketer named Lee Eun-oh. She’s originally very ordinary, but she’s developed an alternate personality which is crazy and free-spirited. On an impulse, she came to a strange new place in order to begin a new life with a new mindset, and she ends up meeting and falling in love with Ji Chang-wook.

Last but not least, Kim Min-seok plays a fellow architect named Choi Kyung-joon, who is very practical and logical. He’s a cynical observer of the world, and unlike Ji Chang-wook, he’s not too hot or too cold in his passions and behavior. Although he’s not quick to anger, he does have a clear limit: If anyone hurts his long-time girlfriend Seo-rin, he takes decisive action.

Kim Min-seok said the following regarding his upcoming role: “I’m thankful and honored to greet viewers after my military service through this great project. I will try my best to show a relatable and consoling character through Choi Kyung-joon, so please look forward to it.”

City Couple’s Love Method, written by Jung Hyun-jung (Romance is a Bonus Book) and directed by Park Shin-woo (It’s Okay to Not Be Okay), will begin airing in the latter half of this year on streaming channel Kakao TV. The channel was launched by the messaging app Kakao and they’ve made major moves this year to establish a presence in the streaming entertainment market.

I'm both excited about and dreading this show - on one hand, Kim Ji-won AND Kim Min-seok?? Brilliant. I can't not try it! On the other hand, I can't stand this writer. I've never liked what she writes, and I probably never will. But hey, maybe the direction and the acting and the soundtrack and the editing and every other little thing will miraculously come together so we can overlook the plot (assuming it's bad)? I guess we'll find out.

I didn't catch the writer before I commented. Hmmmm, but I've only ever seen and not enjoyed romance is a bonus book, so maybe second times the charm with this writer.

As someone who's seen the entire I Need Romance series... this is optimistic.

Oh she wrote those. I liked that series, I didn't know. Then I guess romance is a bonus book is the only one I didn't like. Probably because I didn't believe the couple and honestly the drama was kind of boring.

This is likeable casting for the leads. Anyone know if "multi-season" in this case means a true second season continuing the storyline or new casts each time a la I Need Romance?

LOL exactly my thoughts. so long as its pretty and the acting is great?

I actually liked Romance is a bonus book...
Maybe this drama could even be better???🙄🙄🙄🙄

I really wanted to like Romance is a Bonus Book.

Me too, but then I really didn’t.

I love Kim Ji Won and I usually like her projects, so I have hope. I also love Ji Chang Wook, but most of his projects leave me frigid not even cold(not a reference to drama that shall not be named). I also really enjoy Kim Min Seok. So I am cautiously optimistic.

I love JCW, I guess in Healer only 😭🤪 hahaha
Hoping that this series would be good 🙏🏻
(I adore KJW and KMS ~ hello DOTS fam!!)

I liked him in suspicious partners too.... 🙄😅🙃
But I haven't watched anything else. The two new dramas he has made... I just followed the reviews or recaps and the beanies' comments, and that was enough 😅😂

Haha! Tried following him after Healer but til now, Im still hoping for a greater character he'll play, sooner or later!

Well, basically me too... I loved him like crazy in Healer. There is nothing better than that until now

I feel like this is a lot of us... O_o I mean I doubt myself you know? Do I even like him any more or do I just like Healer? *shrugs*

Me thinks the same with @sicarius 😅

I'll also vote for liking Healer, the show and the character. You know at times good actors can make you stay for bad shows but he doesn't have that in him, I think he overacts quite often and even more than a better writer, he needs a good director to work with.

@wapzy i agree with you. I watched Personal taste for Son Ye-jin... and you have to take into account I don't like Lee Minho 😂😂😂😂😂
JCW is gorgeous, but man, he needs to learn to pick up dramas to work in....

He's added several dramas that shall not be named. I'm close to giving up.

It's partly a zero tolerance for racism issue which made the last drama abhorrent. I'm not sure if he or his company is terrible at picking dramas but I think it started with the management company he's currently with.

OMG THIS CAST AND DIRECTOR. YES. This better be good to my broken heart.

May this one be the first Ji Chang Wook’s drama that I finish without dropping for like 8 times! Dear, don’t disappoint us again •.•

I really like Kim Min Seok! I guess I will give this a shot because of this.

On one hand, I am plainly curious whether Ji Chang-wook will outdo himself and choose an even worse project after Melting Me-Backstreet, but on the other .. I just like Kim Ji-won too much to not feel dreadful/hopeful ㅠㅠ

Just as I am so pleased with ZOMBIE I can finally enjoy a Choi Jin-hyuk show again (not sure exactly what genre it is yet lol) CITY COUPLE may be the one that gets me back to Ji Chang-wook. I plead guilty. I passed on both MELTY and BACKSTREET. I only know Kim Min-seok from DEFENDANT (2017) but his performance was riveting. I am glad to see him back.

On the question of availability I hope CITY COUPLE will be picked up by Viki like MELTY was. Viki is currently subbing LOVE REVOLUTION (not to be confused with REVOLUTIONARY LOVE) which is a Kakao TV production. BACKSTREET ROOKIE I believe was only available on iQIYI.

I’ve always liked Kim Min-seok; he was very endearing in his first drama SHUT UP FLOWER BOY BAND and more recently in DOTS. The only show where I didn’t like his character was as the longtime boyfriend of the female lead’s friend in BECAUSE THIS LIFE IS OUR FIRST. That only shows he’s a solid supporting actor.

I haven’t seen a Ji Chang-wook drama since Healer! Mianhae.

No need @wishfultoki. Besides HEALER, SUSPICIOUS PARTNER is my only JCW drama. SP was a 40/20 drama that definitely should have been 32/16. Dong-Ha stole the show. I am eagerly awaiting his return to kdrama land since he has completed his military service.

Dong-Ha!
I love him!
I really really hope he is coming back to Kdrama land soon. Very soon!

Thanks @ayalynn123 for the good news about Dong Ha’s return. STEALING SLEEP has been added to MyDramaList.

Thanks again @ayalynn123 for the heads up. I saw that 2020 KBS DRAMA SPECIAL was on Viki but didn’t connect it with STEALING SLEEP. I am looking forward to watching.
Also I see at MDL that Dong Ha is listed in the credits for the S/S drama HOMEMADE LOVE STORY. Unfortunately that will be a pass but I am glad to see he is getting parts.
Interestingly recently I have been thinking about Dong Ha. In KAIROS actor Cho Dong-in plays the personal assistant to Shin Sung-rok’s character and he reminds me of the character ‘Mantis’ that Dong Ha played in LAST (2015).

*hides behind @marcusnyc20* You first. I suffered through both dramas that shouldn't be mentioned.

Well, this would be a reunion for Kim Ji-Won and Kim Min-Seok from DOTS.

I‘m not very excited about the fact that it’ll be another multi-season drama, but hopefully this means Arthdal Season 2 has been well and truly ditched?

I stand by the hope that Magical Horse and the horse from Eternal PPL are happily roaming the fields together. Perhaps they should add an asterisk next to multi-season with a long legal disclaimer (if all the actors are available, if season one gets a certain % viewership, if the stars align the month before filming...) .

Oh they are. Can confirm.

Please be good. Please. I love JCW but I haven't watched anything of his after Suspicious Partner. KJW is amazing and I love this director so I'm gonna be cautiously optimistic. Also Kim Min Seok's character has my interest

I’m optimistic about this. Please be good. I really want this to be good.

I really hope this will be a good one. I really like Kim Ji Won. Her dramas are hits. I like Ji Chang Wook, but most of his dramas are.. well..