A mafia consigliere heads to South Korea to claim a gold stash that's hidden in the basement of a commercial building. However, he soons finds himself drawn into a legal battle against a corrupt pharmaceutical company. He grows close to the attorney on the case.

A mafia consigliere heads to South Korea to claim a gold stash that's hidden in the basement of a commercial building. However, he soons finds himself drawn into a legal battle against a corrupt pharmaceutical company. He grows close to the attorney on the case. 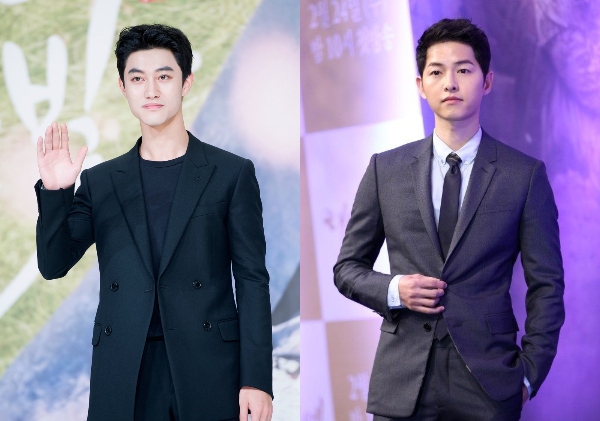 Kwak Dong-yeon (My Strange Hero) is the latest addition to the cast of tvN’s upcoming drama Vincenzo. Starring Song Joong-ki (Arthdal Chronicles) as the titular anti-hero Vincenzo, it’s the story of a top consigliere who comes to Korea after internal struggles within the mafia family forces him on the run. He teams up with a veteran lawyer to punish slippery criminals through methods not strictly within the law.

The character Kwak Dong-yeon will be taking on is Babel Group’s maniacal leader. Because of the power and wealth he had at a young age, he’s grown into a violent, competition-obsessed man. Although he seems remorseless and sneeringly superior to all, he’s actually filled with fear on the inside.

Taecyeon (The Game: Towards Zero) and Jeon Yeo-bin (Be Melodramatic) have already confirmed their roles in the drama as the lawyers who team up with Vincenzo to destroy villains who keep escaping justice.

tvN’s latest darkly comedic critique on society, Vincenzo, will be directed by Kim Hee-won (Money Flower) and written by Park Jae-bum (Fiery Priest). It is set to begin airing in 2021.

Sad he's still not a lead, but he'll eat this role up like no business.

He's very young. Much younger than he looks. He's got plenty of time to be the lead.

Well, this is the first bit of casting that sounds interesting... but after DOTS and Arthdal I am convinced SJK cannot act, I already know Taecyeon can't, the other guy I don't know.... nah, still not going to watch. There is going to be way, way too much Serious Gazing Off Into the Distance. Seriously.

Lmao, everytime I think of this drama I laugh. I will be watching the heck out of all of this because there is no way it isn't ridiculous.

Is this show based off an unmentioned, over-ripe source material? That is the only reason I can think of as to why Vincenzo (BTW, I think the title would have been more effective if they used an Italian pejorative for Asian) is an Italian mob figure, rather than a native Korean crime lord or even one from L.A, Vancouver or NY, without affecting the story one bit. And would certainly cut down on the number of induced eye rolls.

I haven't the faintest, but the entire premise is so absurd that nothing they do will make me think this show is stranger than it already is.

I’m dying to hear Vincenzo speak Italian.
I also find this so complicated to work, but it has Taec Yeon, and KDY and I love them both, but then I think about the story, and... I want to believe!! (But it is a hard task, si hard...)

Yes. I get the giggles every time I read about this show 🤣 It sounds soooo nutty. I can’t wait for the recaps.

Me, too! It's so weird. I hope Vincenzo has a cat. Called Cat.

Lol. It would then be the perfect drama.

His cat’s name should be Gatto!

oh I do hope this will be recapped! the comments will be a riot.

It would be such a lovely mess!! I wouldn't want to miss it.

So he's the bad guy? His character reminds me My Strange Hero's character.

Everything about this reads a damn mess.

DOTS was a mess, imo, but it got 40% ratings even without ppl physically distancing and staying at home due to a pandemic 🤷🏻‍♀️🤷🏻‍♀️🤔🤔🤔

DOTS was a total mess that didn’t make any sense and yet I binge watched in 5 days. It was fun, but don’t ask me what it was about, please 😆😆😆

I never watched it, never approached it even with a 10-foot pole, was never interested, never will be interested.

You are WISE and I bow before you!

I just find that I can never get into the super hyped up dramas...

I didn’t watch “Boys Over Flowers” until about a year after it aired, tried “Goblin” & “Misaeng” but was never Interested enough finished episode 1, never approached DOTS, still haven’t started “My Ahjusshi”...

I watched 2 episodes and thought, "What the heck is this?" and I never looked back.

I think you would enjoy My Ahjussi though...

I’ve been going thru Kdrama fatigue—for a while now, actually— and it’s been so hard for me to start one nowadays 🥺

Question is whether it will be a gloriously flaming mess or a cold old soggy bowl of ramen kind of mess.

Oh, the eternal dilemma!! Will I love this mess or quite before episode 1 finishes?

Gloriously flaming, with that cast it has to be.

Both. The answer is both. That will be the only successful thing about this.

It sounds like a plot straight out of Mad Libs lol.

I'm pretty sure this drama is comedy (I hope) and the story will take place pretty much all in Korea and we will see Song Joong-ki as just Korean.
It will probably focus on what he is now, not what he was in the past, just like Chief Kim or Fiery Priest (an accountant who worked for the mob or a NIS agent).
And fighting against the evil using unconventional methods....
That's what I want to see at least!

I got really exited seeing it was written by the same writer for fiery priest, then I realized the main lead is Song Joon Ki and not Kim Nam-gil or Namgoong Min, then for some reason my excitement went downhill........Not that I don't think Song Joon Ki has talent but still......

I'm not a big fan of Song Joong-Ki but I'm expecting he will show a different side of him like what Namgoong Min did in Chief Kim.
(more like Gu Yong-ha type of guy in Sungkyunkwan Scandal?)

KDY seems to be really good at those menacing type of roles.

i.e. in Moonlight Drawn by Clouds and Revenge is Back.

KDY was the brooding swordsman in MDBY 😱 Dang, how could I not know this!

Gasp. Indeed, how could you not!

Shame on You ! xD

For me, KDY was more the second male lead than the other guy.

In the BTS, it was funny to watch the trio Park Bogum, KYJ and him.

He was a Brooder indeed. He's pretty much the only thing I remember about that show!

@pickleddragon him and the scenes he had with Park Bo Gum and Kim Yoo Jung. I wanted more of these 3 together, especially in the final epsiode 😒😕

I'll be honest, every time I hear about this drama, I chuckle to myself bc it sounds bonkers. But so do a lot of dramas on paper, so who knows what this will actually be like?

In any case, the cast is great.
I'm still waiting for that KDY leading role though 🙂

With every casting I get more and more excited. I loved KDY in all of his works, especially his most recent appearance on IOTNBO. Although I’d love to see him as a lead one day, sometimes supporting characters are much better to bring out a better range to his acting, I just know he’s going to do so well in this role. Yes, the story sounds like a mess but 1. it’s a comedy so I don’t think the writer them self is going to take this drama seriously and 2. it’s the Chief Kim and Fiery Priest writer, which are one of my favourite dramas, so I’m really looking forward to this one!

I will be curious to see if Kwak Dong Yeon can do comedy. Him and Jeon Yeo-bin (who had a fine turn in Be Melo) are the only two I'd be interested in. That said, I couldn't warm up to The Fiery Priest in the first episode I watched (maybe I need to give it more time?), so I am not sure...

Yes to more time to warm up to The Fiery Priest.

hah, how much would you say? I'll try and stick it out and see.

I don't remember. I'm usually hooked or not after four episodes but I think this one took a little longer. I love the camaraderie/teamwork that developed, the humor (with the exception of the bathroom humor) and the found family aspect of the drama.

thanks @ndlessjoie and @katakwasabi - This was in my abandoned list, but I'll revisit it based on your assessment some time soon. I have heard so much about it on DB here, and I always wondered what I had missed out on.

I watched the first episode Fiery Priest yesterday but didn’t find it funny :( As I am getting older, only a few things that make me laugh nowadays: animal vid and MokJae banter 😜 i will wait for your assessment to decide if I should continue :)

Haha. MokJae will stay a chart topper for a while, in the books of everyone who's watching, for sure!

The humor builds as it goes along. I don't remember it starting out funny at all.

This could be salvaged if the following are incorporated into the plot:

A cat? It's about mafia, it should be a tiger!

A cat wearing a slinky bathrobe.....getting ready for a shower?

I'd pay to watch this.

An LT jacket on someone's back?

At least he is the main villain? He is the kind of actor whom I hope will get a lead role soon. I honestly don't know what to think of this drama but I know he will do well in his role.