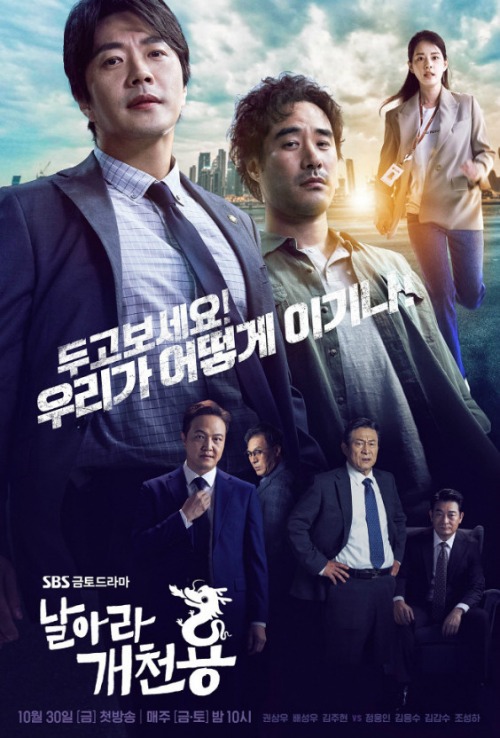 Formerly known as Fly From Rags to Riches, Kwon Sang-woo (Mystery Queen 2) and Bae Sung-woo’s (Live) new drama Fly Dragon has released another teaser in the run-up to its premiere. Kwon Sang-woo plays a penniless high school graduate lawyer, and Bae Sung-woo plays a cynical, unemployed journalist. Together, they team up, fight against the legal injustices perpetuated by the powerful elite, and give a voice to the common folk.

In the teaser, Kwon Sang-woo strides into his office, convinced that if they can just get the retrial approved, the world will change. Bae Sung-woo’s cut has him smiling brightly, convinced that they’ll definitely fail, “It won’t work, it’s too hard. But Kwon Sang-woo wants to push through precisely because it’s difficult and “No matter what, I’ll show people the power of truth.”

When an article pops up announcing the commencement of the retrial, Kwon Sang-woo rejoices at the opportunity. Bae Sung-woo begins to track down the real criminal of the case, but he faces a lot of rejections.

Kwon Sang-woo thinks the best way to approach the case is to target the weakest link. Then, we see mayor Kim Eung-soo (Old School Intern), who is introduced as central to the investigation of the case by Kim Joo-hyun (Rich Son). Then we get a quick shot of Jung Woong-in (9.9 Billion Won Woman) playing a prosecutor who is known to be the very image of ambition.

Narration plays as Kim Eung-soo meets with unreadable Supreme Court justice Jo Sung-ha (Memorist), legislator Kim Gab-soo (Hospital Playlist), and Park Ji-il (Forest): “A prosecutor let a murderer walk free!” Kim Eung-soo has a brilliant thought: They should trap their enemies by luring them with what they want (i.e. a retrial). Copy onscreen says, “We will create justice. A little slowly, but surely!”

A funny series of cuts has Kwon Sang-woo furiously munching away at an apple and Bae Sung-woo chewing away at a piece of grass. Then we cut to Bae Sung-woo running full-speed through a pedestrian area, which Kwon watches through his binoculars. We hear Bae in voiceover proclaiming that Kwon Sang-woo’s genius began materializing only because Kwon was lucky enough to meet him. In the courtroom, Bae Sung-woo cheers for Kwon Sang-woo: “A hero of reversals! A master of flipping! My brother, Park Tae-woong.” Embarrassed, Kim Joo-hyun tries to drag him back to his seat.

The next scenes show some great combative energy, and the narration has Bae Sung-woo challenging the status quo: “Watch and see how we will win.” Kwon Sang-woo adds, “Let’s fight and see who will win. Everyone, come at us!” In the mini-scene afterwards, Kwon Sang-woo comes at Bae Sung-woo with a pen, pretending to be stab him in a play fight.

I hope there's a little drama with the most humorous scenes. May the funny legal theme be with you!
... So might Kwon Sang-woo and Bae Sung-woo's characters might turn into rich by the end of Fly Dragon.

oh kwon sang woo how i have waited for you! to return to our screens with your smiles and great scenes of fighting and talking and generally making me swoon at how great you are at acting and just generally being YOU! welcome back and thanks!

its got a great cast and fun hyjinks are sure to entertain!

The poster isn't photoshopped well lol. Solid cast of actors, full of character actors which I like! Bae Sung-woo is oddly attractive, right? His voice is distinct.

Having the person of Chief of Staff write this is intriguing since the political stuff there was handled well, but that was a straight drama than this which looks like a slapstick comedy+law drama.