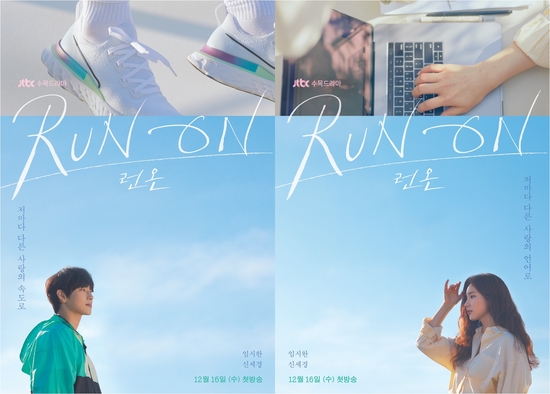 New promos have been released for JTBC’s romance drama Run On, featuring Im Shi-wan (Hell Is Other People) and Shin Se-kyung (Rookie Historian Gu Hae-ryung) in new posters and stills.

The drama takes an introspective look at how people become so engrossed in their individual lives, like they’re each living in their own bubbles. Understanding one another becomes difficult when everyone have different nuances and intentions hidden behind what they say, even when speaking the same language. The story then follows the characters as their individual worlds collide with one another and as they try to break through barriers in communication and forge connections.

In this drama, Im Shi-wan plays Ki Sun-kyeom. Although now retired, his job as an athlete and sprinter defined who he was and still is. He’s learned to value every moment in life, understanding acutely the difference one second can make in competitions. He’s also become sensitive to the importance of timing, knowing that once he decides to move forward, there is no turning back. As such, in relationships, he has a tendency to worry about his actions: when to start something, when to stop, when to approach first, when to express, etc.

Shin Se-kyung takes on the role of translator Oh Mi-joo, whose job primarily involves translating subtitles for films. Similar to Im Shi-wan, her work reflects her character. She understands that translation isn’t simply replacing each word literally from language A to B. She puts a lot of care into how to best convey or express something, the way it was intended in the original language. As a result, even in her personal life, she puts a lot of thought into the words she uses and worries about how to best express what she feels.

The posters reflect the drama’s theme with the two leads in separate posters, each in their own worlds. But when placed together, we see that the two are standing under the same clear blue sky, looking and smiling at one another. 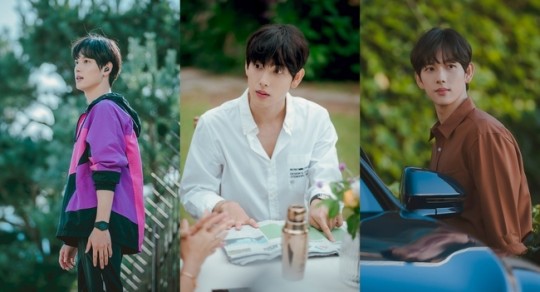 Considering the title, does she translate into run-on sentences?

I admit, I've been waiting for this one. Goo Hae-ryung got me through a rough patch last year, so there's a soft spot in my heart for Shin Se-kyung (I am willing to forget Black Knight ever existed). I'm hoping this is a good watch.

I have a soft spot for Im Shi-wan as I still remember him fondly in his role as Jang Geu-rae in Misaeng. On the other hand, Shin Se-kyung hasn’t impressed me yet with her roles in Habaek and Six Flying Dragon.

I’m not sure if I will check this one out.

Shin Se Kyung isn't the best actress but I still really love her. Im Siwan is the cherry on top so I'm hoping the drama is good...I'll definitely be checking the first 2 episodes out!

So excited for this one! That's an understatement coz I've been waiting for this to air for the longest time!
The posters are so beautiful! They look like novel covers.

I'm curious to see if Shin Se-kyung's English and/or Chinese skills put to use via her character, too.

I've never seen Im Shi Wan in a romance, so this should be interesting if for no other reason than that.

My watch of Misaeng is too close to skip this one. I'm here for you, Im ShiWan.

I'm excited about this. As far as I can tell, this Im Si-wan's first romance role (it'll be the first romance role of his that I've seen, anyway), so that's exciting. I'm generally quite impressed by his acting and he's a sweet guy on the varieties I've seen in which he's been a guest. I don't know anything about the female lead actress.

I just hope this isn't a melo. Based on the show description, it could go that way. After Brahms, I think I want to avoid all melos for the rest of 2020.

I truly loved BRAHMS- but I have to agree with you that it is too soon to go through something like that again.

Is it just me or does this one sound like a snooze fest?

Really? It sounds really interesting to me. Maybe because I do subtitles and I think I'll understand Mi-joo's character.

I was not thinking of the occupations but rather the description of the characters as people. A subtitler could be as interesting or more so as someone with a more 'exciting' occupation.

It kind of gives me JBL vibes, the description given to us is not much but the show itself may have a lot more and maybe they'll hook the audience in the very first episodes. Also Im shi wan and SSK both have a good eye for projects lately (especially ISW) so I'm optimistic but not keeping keeping my hopes high. Though it's very plausible to feel that it will be a snooze fest because they have only given us the character descriptions and mot much plot, for now I'm atleast glad that the leads are normal people rather than geniuses (hopefully, I'm kind of side eyeing ISW's role because he could be geniuuuus athlete). Also hoping SSK carries a normal phone and not a Galaxy fold because subtitling doesn't pay all that much.

Yep. I’m going to watch this one. I like both these actors.

Couldn't watch Strangers from Hell because it was too creepy, but I like both leads. Also like running, so I hope there's some of it in the drama. Dramagods handled athletics in a didactic and really cute way in Mr Heart, hope they manage to weave it into the story in this one too! Totally see how running influences one's outlook on life

I run long distance not sprinter (this pandemic makes me miss running sooo much), so question: how does running, especially the short distance one, influence someone's outlook on life? Ha ha ha

Hi, fellow sufferer! I went back to running after our lockdown, but a new lockdown doesn't seem far away, and I'm already feeling a bit down because of that! Hope they don't forbid outdoor sports again 😭
Actually, I like long distances too, so I was kind of thinking about that. It's a bit like a mindfulness practice for me, it relaxes me and helps me have perspective on things. It also helps me because it's something that takes practice: when I started, or after having kids, or being sick, of course I couldn't handle long distances... But with practice and a bit of patience I always got back on track, so I find running a great resilience builder.
About short distances... I don't know, but I'm sure it must bring something too 😉

I'm loved this show because these are both my favorite leading casts. I told it almost a sports drama but in the end, it's the one and only sports-meets-translation drama. Also, I hope Mi-joo will translate films into English aside from Korean.

I felt little bit disappointed when Run-On delayed multiple times due to Covid-19.

Jtbc rom-coms always get a few episodes watch from me. I'm not a fan of sageuks so I didn't watch Historian so my opinion of Shin Se-Kyung is from some of her less than stellar shows. But I'm really trying to give actors more chances, because it really can depend on the projects. I was indifferent to Go Ara but DDSSLLS made me like her alot.

Yes! Im shi-wan is back after strangers of hell, I've been waiting for his drama. Daebak.