New stills have been released featuring the cast of tvN’s new rom-com True Beauty, who recently gathered for the drama’s first script reading.

Based on a popular webtoon by the same title, the drama stars Moon Ga-young (Find Me in Your Memory) as a high school student named Im Joo-kyung. She has a bright and affectionate personality, and is generally quite optimistic. However, her biggest struggle and insecurity is her natural appearance, and she becomes overly reliant on cosmetics to make herself look beautiful in her eyes.

Enter fellow student Cha Eun-woo (Rookie Historian Gu Hae-ryung), who plays Lee Su-ho. As a Darcy-like character, he appears aloof and cold but is actually a sweet puppy on the inside. Naturally, he’s hiding his own insecurities and fears. However, he and Moon Ga-young end up sharing their secrets with each other and they bond over their individual insecurities. As their relationship grows, they reassure and encourage one another to realize their own self-worth.

Hwang In-yub (Eighteen Again) takes on the role of Han Seo-joon, another student at their high school. He’s described as wild and rough around the edges, but becomes soft-hearted and warm around his mother.

Supporting cast who were also present at the reading included Oh Eui-shik (Hi Bye, Mama!), Im Se-mi (I’ll Find You on a Beautiful Day), Park Yoo-na (Hotel del Luna), Park Ho-san (Will You Have Dinner With me), and Jang Hye-jin (Memorials) among others.

Writing for the drama is Lee Shi-eun (Top Star Yoo Baek) and directing will be helmed by PD Kim Sang-hyeob (Extraordinary You).

tvN rom-com True Beauty is currently set to premiere towards the end of year in December, and will be broadcasting Wednesdays and Thursdays. 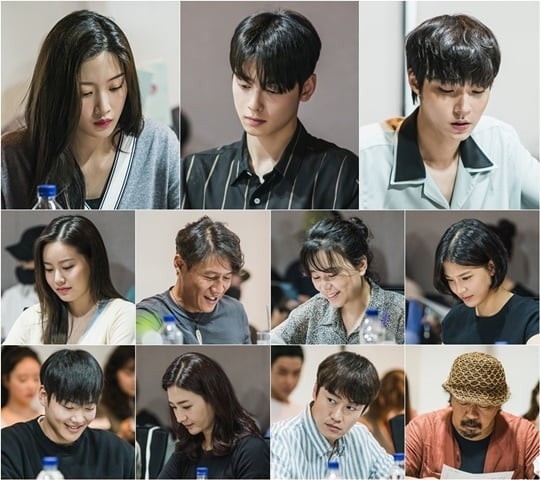 To me, Moon Ga-Young has the kind of face that looks thirty at twenty and will still look thirty when forty. Even though she is still in her early-mid twenties, I think she will look conspicuously mature in a high school setting. I think I will pass, as this one looks more tailored toward, shall we say, the more young at heart.

Thiss!! If this role was given to her maybe 2 years ago, around the time of Tempted, it would have been more convincing, but she right now, she has a more matured look. And for those who have watched her in Waikiki last year (where she plays a 20-something year old character whose wedding gets stopped) and in Find me in your memory (where she is a 30 year old actress), it becomes a little more difficult to believe that. Which I believe is a pity coz people will overlook her good acting skills because of that (which is ironical considering the drama is about insecurities about natural appearance)

When was excellent in FMIYM. Totally believed that she was late 20s. She even said herself that she wanted to play roles her own age, so regressing back to H.S seems like a step back imo. Still she’s now leading lady status now, and it’s a project that’s buzz worthy because of the source material.

While I'm not sure of whether I will be watching this or not, I do hope that this drama and the hype for it will remain to be about the female lead, considering she is the titular character. Because I have noticed that in the three dramas that Eunwoo has been the lead (including this one), the male lead is more promoted or hyped up, and not just by audiences, but by the promotion team as well (and yes, I do realise that he is more famous than the female leads). But in all three dramas ( Gangnam beauty, Rookie Historian and True beauty), the female character is the titular character and all with some message to deliver to the audience, but they were never hyped or promoted (and in True beauty's case, is not being hyped) and so, whatever message that was trying be told, never reached me, because somehow, I found myself focusing on the male lead. I really do hope that in the time leading to the drama and during the drama, the main focus is on the female lead.

I feel like so often K-drama would have female centered stories and all of a sudden, it switches to the ML. Giving him a boost and story arc in the latter half. Come to think about have we ever given a role where the woman Ian superpowered other than any Strong woman, as much as we given to men?

This is pretty much all Park Min-young dramas.. sigh

:( I didn't think about that, but your right. I think a lot of shows use a name female start o build up hype/interest at 1st. However, it turns to the male's perspective/his show 2nd half. Maybe that's why despite her success as FL, she hasn't blossomed career wise compared to Park Seo Joon, Yoo Seung Ho, and etc.

yes! I feel like she had more backstory in Healer where she wasn't the titular character than the ones she was for.

Exactly. And what makes me question this drama more is that, if you come across the script reading video of this drama, all the actors mention that this is similar to the webtoon. And as someone who read the webtoon before learning about the drama adaptation, I know that the webtoon itself is pretty much plotless at this point and can only be appreciated for its art. The message that it started out with is pretty much lost.

Wasn't there a music video with one of the friends from Into the Ring, that was loosely inspired by True Beauty? I think the vibe/looks there fit the webtoon more imo.That being said, I've no stakes in the original source material nor the actors excluding Moon Ga Young who surprised me with her performance in FMIYM.

Inner beauty dramas/looks based dramas in Korea are shaky imo given the culture/lookism it adheres its actors on. Ex: Park Bo Young who is very pretty, was called ordinary looking in Abyss?! And a downgrade from Kim Sa Rang. Dunno but its very rme.

My first impulse is to say that this cast and team is utterly wasted on True Beauty, but that's not entirely fair. True Beauty has its place in the world, the webtoon is fairly entertaining. I just don't know what more they can do with this, what this adaptation will achieve.

it's always nice to see rookies getting big breaks like this- good for Hwang In-Yub!

Yes, Hwang In Yub !! The first time I saw him was in The Tale of Nokdu and I was wondering who the hottie with the boyish face and deep voice was. And after seeing him in Eighteen Again I can say that he’s gonna be amazing here. Can’t wait to see him take on a leading role.

Agree. I enjoy his acting in Tale of Nokdu. I like the cast of this drama.

Cha Eun Woo’s character sound like his role in Gangnam Beauty. I hope his acting improves in this drama.

The only thing that’s making me tune in is Moon Ga-young and Hwang In-yub, I’m all for cliche rom-coms but the webtoon has no substance, so unless the writing can fill in the gaps and not just cater to the actors looks, it can be good

I just hope the writer adds something good of her own.

Hum... The plot reminds me a lot My ID Gangnam Beauty and they chose the same actor. I liked CEW in My ID, at the end his character was less cold and he didn't really show it, but it didn't bother me. But I really didn't like him in Rookie Historian, ok his character was useless but his acting didn't help... So I guess he's back in his confort zone.

The PD did a great job with Extraordinary You. It was beautifully filmed. The story was more serious than it looked.

I'm a fan of Moon Ga Young so I'm gonna check this out.

Moon Ga Young looks too old for CEW. She looks like his older sister. They should have offered the role to Kim Yoo jung.

Joane (aka Moonlight) - you are trying too hard. hahaha... you bias has lost out this time!

Yeah. I thought she's gone for good in the other site (A Koala's Playground). But surprisingly she's here spreading toxicity. CLASSIC HAHA

I am currently still following the webtoon and personally, I am disappointed with the development (?) Of the female lead. 🤷‍♀️
Here is to hoping that this Live adaptation of the webtoon would be better. In Ga Young I trust 🙆‍♀️