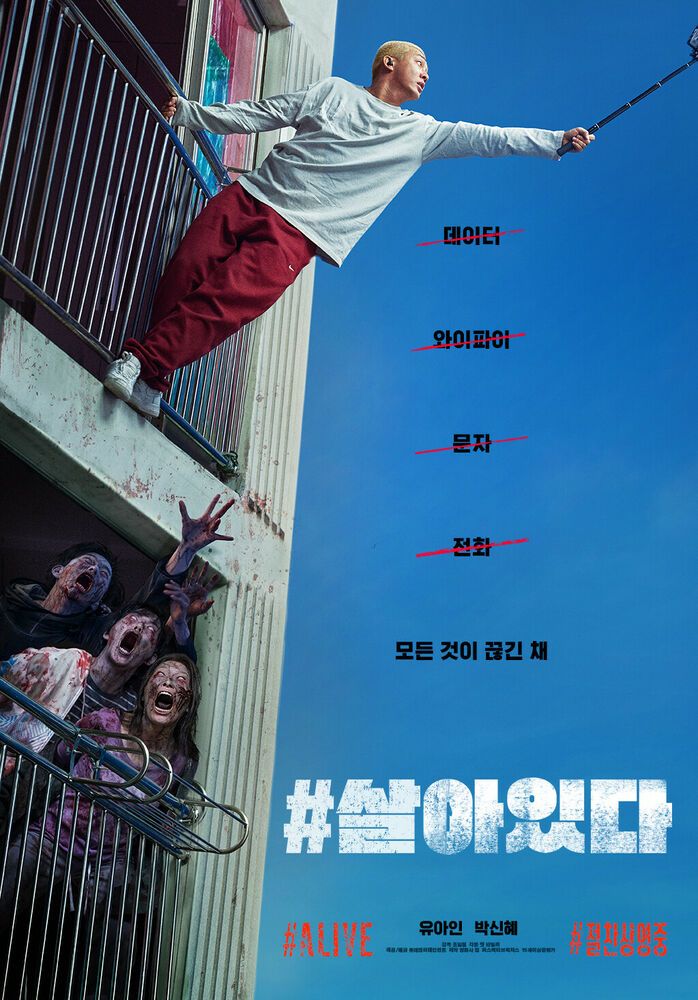 I’ll say this upfront—I’ve never watched a zombie movie before. I know, I know. But I’m not much of a horror fan, and in general I lean toward psychological horror that traffics more in dread and suspense, and less in gore and hacking off body parts. But the trailer for #Alive caught my interest, because it seemed to promise Park Shin-hye as I’ve never seen her before. So I girded my loins and jumped in.

#Alive is a zombie film, the feature debut of director Jo Il-hyung, adapted from the script of Alone, an upcoming American horror movie. (And yes, that annoying hashtag in the title does end up making sense.) The story begins with OH JOON-WOO (Yoo Ah-in) waking up alone in his family’s apartment, starting his day only to find he’s in the middle of a zombie apocalypse.

He soon loses touch with his vacationing family as cell and internet connectivity break down. Barricading himself in his home, he tries to survive until someone rescues him. He spends the next days battling hunger, isolation, fear, and the zombies that have taken over his apartment complex. He’s at the end of his rope when he encounters YOO-BIN (Park Shin-hye), another resident who’s trying to survive.

I appreciated that Yoo-bin is far smarter and more resourceful than Joon-woo, when it comes to both scraping together food and water, and defending herself from the infected with booby traps and weapons. Usually when we get these last-man-alive stories, the hero tends to be the mastermind of his own escape, but here, it’s Yoo-bin who provides the smarts, the badassery, and the lion’s share of the bravery.

I loved seeing Park Shin-hye as Yoo-bin, who is so different from her usual naive and soft-hearted heroines, falling in love with men who treat her with various degrees of condescension. She definitely gets a chance to stretch her acting chops here; she even has some action scenes, which she pulls off with calm and deadly violence. My only complaint is that Yoo-bin is the far more interesting character; I wish we could have started the movie with her, instead of Joon-woo. I’d have enjoyed viewing this story from her perspective.

The plot is straightforward, but it resonates differently now than it was likely intended to when the movie went into production. Horrifying as the imagery of people biting out each other’s jugular veins is—especially to a wimp like me who normally doesn’t watch this type of stuff—it was more chilling to reflect on the ways this reminds me of our current situation. (That opening sequence with mutating cells and viruses that look a little too familiar was rough to watch.)

There’s no escaping the parallels to the feeling of being in lockdown, carefully calculating when you need to go out next to buy food, wondering who in your vicinity might be carrying the infection. For these characters too, technology is a precarious connection to the outside world that can provide solutions for immobility and isolation. Joon-woo spends his first few days glued to the TV, listening to broadcasts about how the disease is spreading quickly in densely populated areas. Most striking now: the zombie virus doesn’t immediately become apparent after a person is bitten, which means they seem totally fine and not-dangerous until they… don’t anymore.

Then there’s the way that people who must be saved so easily turn into bodies that need to be disposed of, although here there’s the awful extra stage when they turn into monsters. (Even that isn’t a judgment the film allows us to easily make, forcing the viewer to ask what value people’s lives hold once they’re infected and unable to resist harming others.)

There’s also the feeling of inevitability, the literal wave of infection that advances on the protagonists in the form of lurching undead bodies, but is burned onto the insides of our collective brains as the graphs we watched climb with dizzying speed in the first months of the pandemic. It’s definitely cathartic, in that context, to see Joon-woo bashing zombie heads in with his golf club and Yoo-bin hacking and slashing at them with her arsenal of makeshift weapons. As though they’re trying to literally crush the virus into submission.

Although the chase and fight scenes are thrilling and well-done, the film is at its best in its quieter moments. Most effective is its portrayal of the protagonists’ loneliness and fear as they face their mortality in complete solitude. Joon-woo and Yoo-bin are both alone in their homes for many days, with communication completely cut off to the outside world and nothing to fill the empty days but waiting.

We don’t (unfortunately) spend these days with Yoo-bin, but the first third of the movie is entirely Joon-woo in his apartment, slowly starving and losing hope. Yoo Ah-in does a wonderful job at expressing the raw feelings of helplessness and rage that slowly come over him. The gradual rise of tension is both internal to his character and external in terms of plot development, in a neat mirroring of the two that works very well. The film builds to a climax that had me breathless and unsure if it would be the characters’ internal conflicts or the external threat of zombies that would kill them—or if they would realize their increasingly faint hope of rescue.

Putting my personal feelings about zombies aside (on that front, I really can’t say whether I regret watching this or not—I’m still a bit traumatized), and although I’m unable to compare this to the zombie oeuvre, #Alive is well-made horror that made me feel. It has enough resonances to the current moment to elicit some pangs, but the zombies’ over-the-top grotesqueness gives the viewer enough distance to feel release at the spectacle of them being actively vanquished. Moments of unexpected humor break the tension just enough. Summer has just about wound down where I live, but this felt like a perfect summer horror flick—perhaps not the most memorable, but an intense, vivid, occasionally horrid and often enjoyable experience.

This is an excellent review. Thank you! Like you, I don't watch zombie movies. They just seem to be the same old... And yet the two I have watched and enjoyed have been Korean: The Train to Busan and #Alive.

I held off on the Train to Busan for ages and finally was persuaded to watch it because of the great reviews that I kept coming across.

I'd watch Yoo Ah-in in anything. IMO he is a superb actor, and he is the same in #Alive. You are absolutely right about the contemporary resonances. I didn't mind about the logical gaps that other reviews have enumerated in this film because the predicament of the shut-ins amplifies what people all over the world are confronting. The virus was an allegory for infection, and it can work on many levels. Reality
always seems to go beyond anything that can be imagined. At the same time, I found several moments in the film terrifying, and I was deeply relieved at the end!!

I still wonder why I could tolerate the Korean zombie films and not any others. They seem fresher and not so soul destroying, born out of a culture that creatively nails the emotions of the human predicament in small and large-scale ways. At one stage I feared what it would be like for YAI's character to suddenly recognise the face of a family member in the crowd of infected people. That sort of small detail never eventuated for him, but that's where the film led us (not to give away anything that happens). That's the sort of thing that I constantly come up against in works produced in such a creative culture. It salvages a mixed and complex humanity out of the most dire circumstances.

"They seem fresher and not so soul destroying, born out of a culture that creatively nails the emotions of the human predicament in small and large-scale ways."

You totally nailed it! Just like you, Train to Busan and #Alive are the only two zombie films I can think of that I've enjoyed.

Thanks so much for the review, Laica!

It's almost scary how well-timed the release of this film was! Like you, I was most interested in it because Park Shin-hye seemed so different in the trailers (and I also really like Yoo Ah-in). I loved her here, and when I picked Memories of the Alhambra back up a few days after watching this movie, it was so jarring seeing her back in her typical type of roles.

I really hope she gets more opportunities to stretch her acting range in her future drama offerings, and be more than the sobbing damsel-in-distress. I honestly felt bad that she was in an interesting, high-concept drama with so little to do, so I'm glad she was at the forefront of the action in this film along with being the brain of the duo.

The movie as a whole was a great popcorn flick. I had snacks on-hand and used the crunch to relieve my stress while watching. Sure, it's not the greatest film, and I had to suspend my disbelief, but it was pretty fun to watch, and that's all I wanted at the time.

Thank you for the review @laica
I tend to steer away from zombie movies but Yoo Ah-in reeled me in.
Like you, I enjoy watching how clever, resourceful, and brave Yoo Bin is. The movie did a successful job of giving me the angst of being trapped and terrified of the world out there, maybe it's also part of being socially distancing from human due to the cororavirus (living in LA where the cases are still spiking).

Thanks for the review @laica!
I have watched enough recent zombie films to like the genre enough. so when I saw this in Netflix I knew I needed to watch it. I actually find it refreshing that our lead is inept at the survival thing. It adds to the level of reality, disbelief, hopelessness and desperation in the first half of the film as his resouces dwindled. I cant help but compare it to lockdown since I am sure we all had different level of anxiety when the world we know it changed overnight.
For me, it was a fun watch and the lead was relateable. In my mind, I think this can be in the same universe as Train to Busan. 😉

I love this film... what a great one of the Korean blockbuster hits of 2020.

Thanks for the review, @laica! Yes, this movie came out eerily at the right time, we've all been Joonwoo at some point, lying down on our couches glued to catastrophic news broadcasts. It's a good summer flick, no more no less. And props to Yoo Ahin, flawless as always, and Park Shinhye, coming out of her comfort zone as an arrow-shooting badass!

Thanks for the review! I'm not a zombie movie enthusiast, but I enjoy watching them nonetheless. So when this movie was released on Netflix, I couldn't wait to give it a try (also Yoo Ah in and Park Shin hye starring in it was a plus)..Overall it was an entertaining, one-time watch movie with relatable characters.