Mystery builds in new teaser for Tale of the Nine Tailed 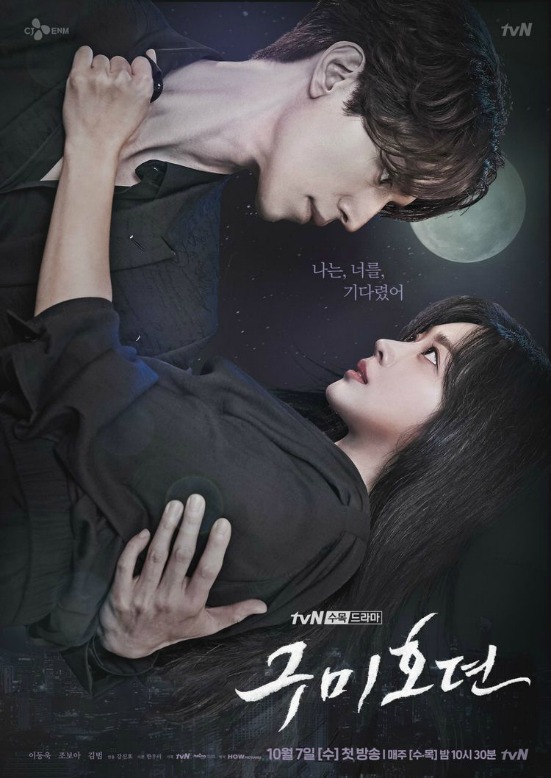 Lee Dong-wook plays a powerful gumiho who used to be the guardian god of the Baekdudaegan Mountain range. Now, he’s become used to all the comforts of the city, residing in Seoul while catching all the demons that slip through to the human realm and create chaos. Jo Boa plays a PD who specializes in the supernatural and begins a hunt to find gumiho Lee Dong-wook. Finally, Kim Bum plays Lee Dong-wook’s half-human half-brother who is also the most dangerous gumiho in the world.

Flashes of a rainy day and a mysterious car crash are accompanied by someone accusing Lee Dong-wook of breaking taboo and losing his guardian god privileges. In a luxurious penthouse suite, Lee Dong-wook sprays himself with cologne and replies with an unexpected answer: “Watch how you talk. If it weren’t for you, I could be spending the day eating ice cream and watching American TV shows.” Scenes show Lee Dong-wook enjoying mint chocolate chip ice cream, and rummaging through a local convenience store freezer full of popsicles.

Kim Bum and Jo Boa have a tense-looking confrontation that is followed by a wedding scene, where it looks like the bride suddenly sprouts claws. Jo Boa suspiciously watches Lee Dong-wook leaving the wedding and puzzles in her voiceover: “The witness statements and the scene evidence are strangely telling different stories.” The forest fight between Kim Bum and Lee Dong-wook is briefly shown.

Lee Dong-wook boards a bus that begins to waver in the middle of the road. Kim Bum who has transformed into a harmless-geeky-boy-next-door type tells Jo Boa, “I saw the man at the Fox Mountain Pass.” He transforms back into his suave self in the parking lot, and his voiceover continues: “Do you still wait for her? Your dead girlfriend?” Another quick fight scene is shown, and Jo Boa falls from a high-rise building, but luckilyk, Lee Dong-wook is right there batman-style to catch her.

In the next scene, Lee Dong-wook looks at the phone, thinking that Jo Boa is too similar to someone he knows, both her voice and her appearance. Scenes of their first meeting in that mysterious car crash are shown, and Jo Boa asks Lee Dong-wook what happened at the Fox Mountain Pass twenty-one years ago.

tvN Wednesday-Thursday Tale of the Nine Tailed, written by Han Woo-ri and directed by Kang Shin-hyo, will start airing on October 7. 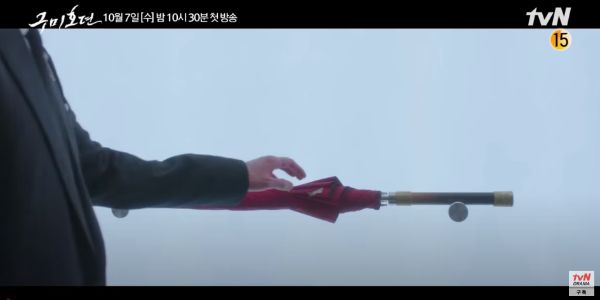 This better be gooood 😊

On a totally superficial note, I’m watching this because of how good LDW looks

they both are for me although my love for LDW runs deep!

After Lovecraft Country's gumiho, this should be a fun take too.

I was about to type a mention of that episode, myself.

Gah!! I really need to watch Lovecraft Country. I saw a lot of tweets surrounding Jamie Chung's episode. So cool to see Korea in Western settings than the K-drama settings lol.

It was really good, most of the episode was in Korean, the HBO translators are better than the Netflix one. It is super graphic though, but it is also HBO so that makes sense.

So excited for this! The cinematography looks really stylish and the actors are all beautiful so what more reason do I need to watch

With how much photoshop is done and how pale they made the 2 leads look, it seems more like a vampire drama, not a gumiho one 🧛🏻‍♀️🧛🏻

.... And at this point, I really should stop complaining and making fun of how campy this drama's promo is making it seem, I know XD Sorry not sorry

It's not a K-drama, if the ML and FL aren't white-washed to oblivion.

Speaking of: Lee Dong Wook should play a vampire next.

He might as well add it to his repertoire XD

That is one interesting array of extra-terrestrial like creatures on his resume lol. Might as well play a vampire to cap it off. 😩

Why is it from Guminho, Grimm reaper till Goblin, always seem having place of their own, they don't have to worry to pay rent or make a living? 🤭

That was the complaint of Choi Jin Hyuk’s impecunious zombie, who is beset by bills, wondering how they all managed to afford nice apartments while he didn’t have enough money to buy meat and BB cream...

His problem is so relatable 😄 for me

I feel like this has the potential to be really good-- but also at the same time it totally has the potential to be a super disappointing drama. Idk I honestly can't tell from the trailer; it could go either way. I'm excited for the first episode-- I feel like we need a new highly produced drama since Flower of Evil and IOTNBO both ended, but at the same time I'm not going to get my hopes up for this.

I totally feel you. It’s looks really exciting and fast paced but it could take the typical route and focus more on their relationship and the angst that comes from it because of their difference in species or whatever. Hopefully the world building and story is rich enough to be engaging till the end.

I have seen some trailers which were so good that you want to watch the film/serial just to realize that those scenes in the trailers was the only good part about them and the ones who made trailers was better than the makers. :-D

I am going to give it is try but not keep my hopes up. I am also not sure if I start in the first week or let it accumulate a bit more for binge watching later.

Kim Bum looks like he could be a lethal serial killer... so handsome, and yet so dangerous😂😂😂😂
He has an interesting face, no longer a baby face, by the way.... I hope his acting has improve as well...

i sure hope this is good! 😆

I love this teaser so I still loved Kim Bum and I hope to wish me good luck on return of Kim Bum's popularity.

''...but luckilyk, Lee Dong-wook is right there batman-style to catch her.''

@tineybeanie It should be luckily, not luckilyk.

13 YY Chats with Toast Between Bites

What happened at the Fox Mountain Pass twenty-one years ago? @leetennant?

Only the clams know. And they're not talking.

Honest Confession: Never seen Kim Bum in anything else. I was going to watch it for LDW (Grim Reaper). But that once shot of KB being that geeky (and still creepy) dude, I am interested to watch him in this.

For Kim Bum, I would suggest watching Padam Padam as he played a very troubled and strange character in that drama. https://www.youtube.com/watch?v=h73K8jUG78w

waiiiiiit... why does "watching American TV shows" trigger a deja vu in me, who else did this.... a god of sorts.

aha!!!! I know. It was in Ragnarok. The ancient gods becoming comfy.

The promo game of this drama has been A+. I hope the drama will be as good

idk why i accidentally hit the pancake emoji lol