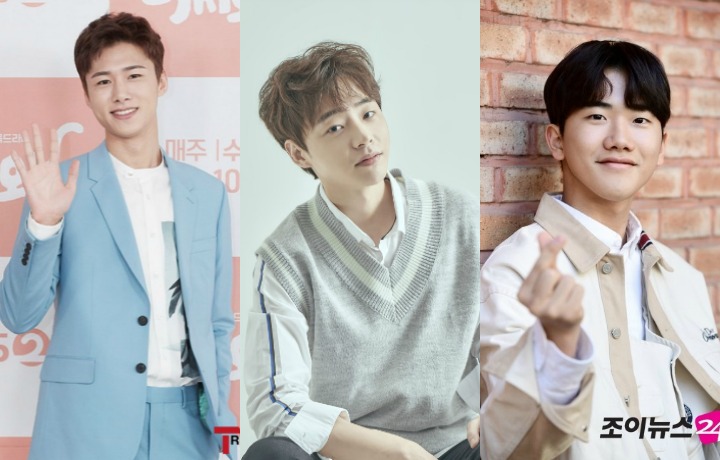 Upcoming drama Youth has announced its casting lineup of fresh-faced youngsters: Seo Ji-hoon (Men are Men), Noh Jong-hyun (Old School Intern), Ahn Ji-ho (Nobody Knows, House of Us), Seo Young-joo (Nobody Knows), Kim Yoon-woo, Jung Woo-jin (Vanishing Time: A Boy Who Returned), and Jeon Jin-seo (A Couple’s World). The drama tells the story of how these different youths mature through adversity and become a seven-member band.

Based on the stories from the BTS Universe (a fictional alternate reality inspired by the actual K-pop band BTS), the drama Youth will explore the brilliantly shining moments of the boys’ lives. Disclaimer: I have not yet been initiated into the BTS Army, so please bear with me if any BU-related details are incorrect.

Seo Ji-hoon plays a character named Kim Seok-jin, who seems like the perfect son, but he lives in the shadow of his congressman father. When he switches schools, he meets the other boys and begins to express his emotions more freely.

Noh Jong-hyun plays Min Yoon-ki who is the target of many malicious rumors. They say that he killed his own mother by setting fire to his house. He seems aloof, but he’s actually quite warm-hearted. His mother was his entire world, but now he’s left alone with only an old piano for comfort. Jeon Jung-kook approaches him without any prejudice, and they help heal each other’s wounds. Jung-kook will be played by Jeon Jin-seo; he is a depressed character who has an unstable family situation. He can’t seem to feel any happiness and doesn’t see any meaning in life or death.

Ahn Ji-ho is a relatively new face in dramaland, but he’s earned a reputation as a rising Chungmuro talent and he’ll be playing Jung Ho-seok. Despite being abandoned at an amusement park when he was young, Ho-seok is an optimistic, energetic dancing machine. Similarly, Park Ji-min (played by Kim Yoon-woo) always has a bright smile, but his smile hides secrets. Because of his overprotective family, he’s had to deal with so many lies about his childhood that he’s at a point where he has difficulty understanding himself.

Seo Young-joo plays Kim Nam-joon who dreams of having an ordinary life because his life has been so difficult and full of thorns. Although he works multiple part-time jobs, he’s never slipped from the top academic ranking in school thanks to his commitment and sense of responsibility. Finally, Jung Woo-jin plays Kim Tae-hyung, who has many emotional scars due to his alcoholic father. However, he still has hope that his father will beat his addiction and go back to being the gentle dad who threw ball with him, before his mother ran away. 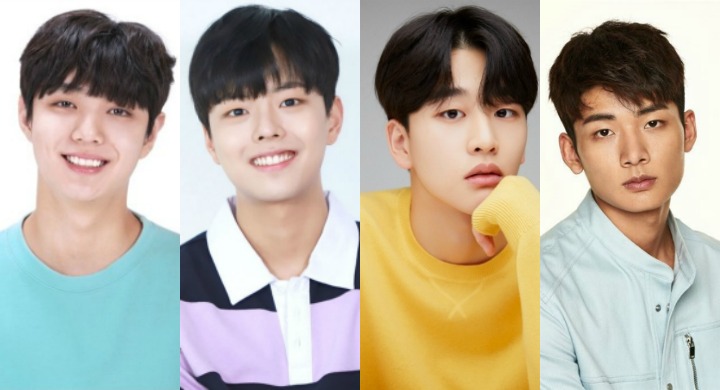 It's ridiculous they're using the members' real names.

Yeah, people not into BTS are going to think the drama is biographical when it's the story of the members in an alternate universe.

And so much pressure for the actors!

My favorite niece is a big BTS fan- I will have to alert her to this.

As an ARMY and Kdrama addict it is so amusing to see a drama that was inspired by BTS' Bangtan Universe actually happening. I think the BU is incredibly interesting and full of potentials, that said..it kinda sounds like the drama is an ordinary coming of age/slice of drama story. I was wondering if they will add the Save Me webtoon storyline (I was kinda hoping for it) but it seems not :/ Fun fact: (or not) Youth is also one of my favourite BTS songs even though it is a mashup of couple of their songs. It is an intro for one of their Japanese albums and starts with Namjoon introducing the members and talking about chasing dreams and being young. It always makes me emotional so I think Youth is a great title for the drama especially that the BU started out with a basic story of showing struggling people and their friendsip.

I dived into this news with my friend and we realized that there are more than 10 years of age difference between the youngest and the oldest actors. I am just not sure what the plans are especially that Jungkook and Yoongi supposed to have a really important relationship but I just can't see these two actors as soulmates basically. My guess is, it is very loosely based on the BU, they take the characters of that universe and that's it..welp, too bad.

Ok so not being a BTS fan and not being into kpop at all, I was just mildly interested in the drama however that all changed the moment I read that the writer is the same as WEIGHTLIFTING FAIRY KIM BOK JU!! I WILL NOW MOST DEFINITELY WATCH THE DRAMA, no questions asked!!
I just recently got done with rewatching it and was left wanting more of both, our OTP and the writer, so I'm glad the latter wish of mine is coming true. As for the former, rewatching BokJu×JunYoung moments on YT will suffice ig, sigh.

@bluewaters20 @tineybeanie Actually, I am very confused about the writer As far as I know Weightlifting Fairy was written by Yang Hee Seung who also wrote High School King of Savvy, Oh My Ghostess and Once Again and is rapidly becoming one of my favorite writers.... I have no idea who Kim Soo-jin is.

WLFKBJ totally has YHS's style, maybe the other writer assisted, who is the main writer of this show.

Yes, that's what it must be.

Please let Seo Ji hoon be the actual male lead for once.

Lead or just an ensemble member, I am excited for him to be in a drama where he won't be downtrodden or the loser in a love triangle.

What a weird idea...

Well, it worked for the Monkees...

Monkees...talk about a name out of the past!

It's kinda different, isn't it? The Monkees were created for the TV show. They didn't take a real and famous group to adapt in a TV show.

The Monkees had actual music on the airwaves.

are you trying to imply bts aren't popular? sorry i'm confused. do kpop and kdrama obsessives really live this far removed from reality?

No, I'm saying unlike the cast in this drama, the Monkees actually recorded music that was played on the radio.

Be careful, latebloomer, explain yourself before legions of enraged Armies descend upon you!
lisalogy I believe kpop and kdrama fans are well aware of who BTS is; we aren't living under a rock. But I would be careful about throwing around an "obsessives" label.

I live with an Army. I tried to explain this misunderstanding to her today. She was sure no one would understand and that all Armies would be offended, even though my comment had nothing to do with BTS, only with the drama cast.

The coincidences keep adding up, I just finished Nobody Knows with Ahn Ji Ho and Seo Young Joo!
I think they should just make it a stand-alone slice of lie drama though, why use the BTS names and stuff, it's a needless mess imo. Just let the actors portray fictional characters, now they're in a weird place of being compared to the actual BTS members and also having to act fictional events...

The same name thing is gonna be a huge mess. Those who don’t know BTS, it’s not actually their biography, ok? Also, since Suga (Min Yoongi) is my bias, I’m gonna look out for Noh Jong Hyun.

If they don't know BTS, they wouldn't know their names anyway.

Also, that's what BigHit is trying to sell, their names since the members won't be there. It was done for the business, of course.

I'm really excited about the Solomon's Perjury reunion between Seo Ji-hoon and Seo Young-joo, I hope this can be a great role for Seo Ji-hoon, I'm tired of him always being the second lead in a drama, he needs a good role for him because I loved him in Solomon's Perjury.

Aaw, Nobody Knows reunion for Eun-ho and Tae-hyung!

Spoiler-ish or maybe not?
If they really stick closely to the original Bangtan Universe storyline, there will be a bit of a sci-fi twist involved which centers around Seokjin's character which will be played by Seo Jihoon. I'm actually pretty excited. The Bangtan Universe is one of the reasons why I got so invested in BTS.

Do take note that this is not based on BTS in real-life (their music career or how they became a band etc) but it is based on the fictional storyline (coming of age story) they have throughout some of their music videos and there are also books and a webtoon published following the story. Just in case some people are confused.

Being an ARMY, let me just play my part to maybe list down some things you can take a look at if you're really curious about the fictional storyline. If not, then you can just enjoy the show as it is.

It starts with the HYYH (The Most Beautiful Moment in Life) era music videos.

Here is playlist of all the music videos that has BU(Bangtan Universe) content in it: https://www.youtube.com/playlist?list=PL97eA8noXXiL0bBY8FfdvbpWE1n52sj7Y

Here is the link to the Save Me webtoon which you can read: https://www.webtoons.com/en/drama/bts-save-me/list?page=1&title_no=1514

I recommend you to visit this website if you require a starter guide which would explain things better: https://www.thebtseffect.com/bu-starter-guide

I knew I'm interested already. BTS already became not only one of the greatest boybands ever in the world but also one of the greatest K-pop acts of all time (also included Psy and Blackpink). BTS got two US number-one hits (Dynamite/Savage Love) and I'm still a greatest BTS fan.

For the actors, I knew they're all seven male leads and I didn't think that they'll be joining all seven actors who's now or finally so-called K-drama male idols/icons.

I hope if Netflix will be picking "Youth", then I will be satisfied because Netflix now became a mammoth worldwide success so BTS fans will be happy.