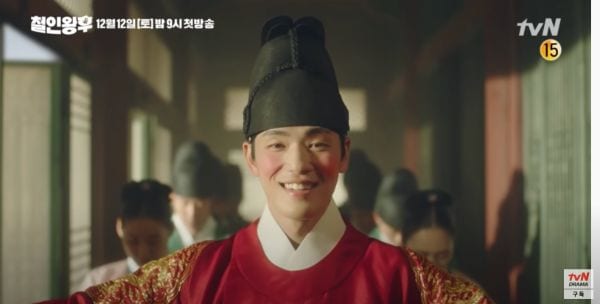 The third teaser for tvN’s fusion sageuk-comedy drama Queen Cheorin has been released. It features its two leads with Shin Hye-sun (Angel’s Last Mission: Love) playing the titular queen and Kim Jung-hyun (Crash Landing on You) as her two-faced husband and the King Cheoljong of Joseon.

When an unfortunate accident occurs, a blustering chef in the 21st century somehow travels through time and wakes up in the body of the Joseon-era Queen Cheorin. The recently released teaser shows a snapshot of the comedic hijinks that ensue when the queen’s body is overtaken by the male chef’s soul, unbeknownst to her king.

From across the hallway, King Cheoljong notices Queen Cheorin coming toward him. She begins running in his direction, and her attendants gasp in shock at their queen’s sudden lack of decorum and call out to stop her. Shin Hye-sun runs right through the onscreen copy which says: “A match made in heaven.”

Believing that her actions are due to her eagerness to see him, King Cheoljong blushes bright red and shyly opens his arms to receive her. She also opens her arms wide, as he narrates: “A match made in heaven. Even after thinking it over a ten million times, I’m always surprised. She is definitely…”

However, he trails off as she brushes right past him to grab the bottle of wine being carried by one of his maids. She exclaims with excitement, and gives her thumbs-up for the alcohol: “Wild ginseng wine, oh yeah!” King Cheoljong’s expression falters, and he finishes his thought internally: “… something from another world?” Queen Cheorin gives him a light punch, as she impertinently says, “What are you staring at?” In the last sound bite, Queen Cheorin’s lady-in-waiting whispers, “Your Majesty, you can’t…”

Though both Queen Cheorin and King Cheoljong were real figures in Korean history, it seems pretty obvious that there will be lots of creative liberties taken when it comes to history versus drama. They lived during a period full of intrigue, scheming, and sad events, so it will be interesting to see what makes it from real life onto the small screen.

tvN’s Queen Cheorin will begin airing on December 12; it will be directed by Yoon Sung-shik (Hwarang) with Park Kye-ok (Doctor Prisoner) and Choi Ah-il (Lovers of Six Years) penning the script. 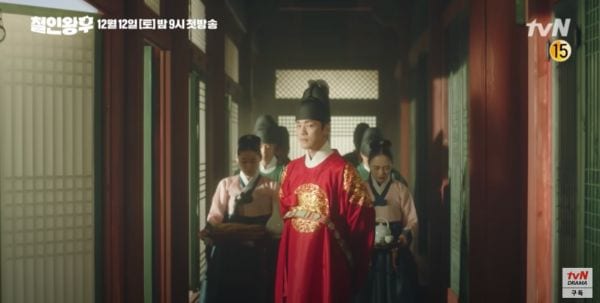 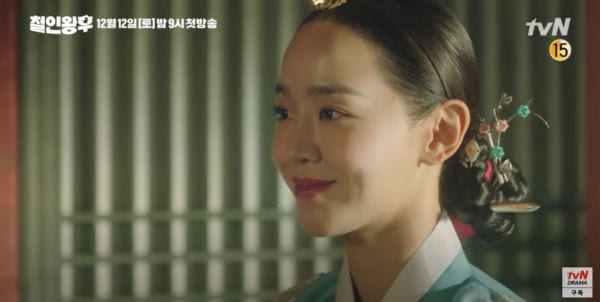 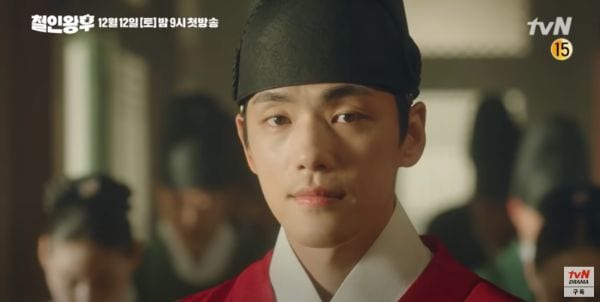 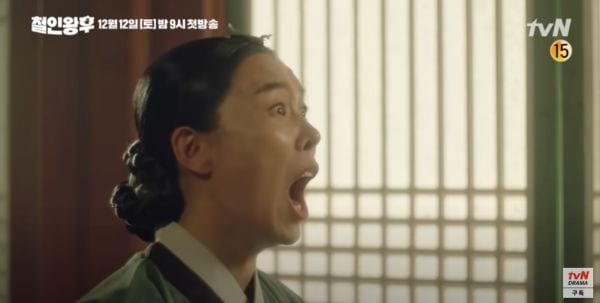 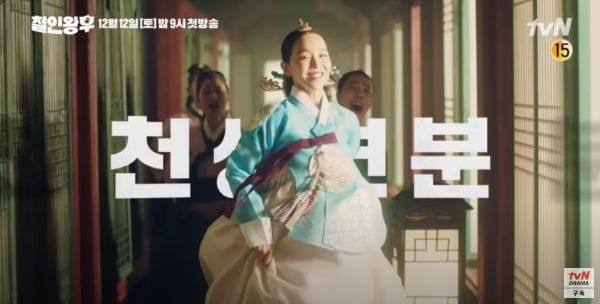 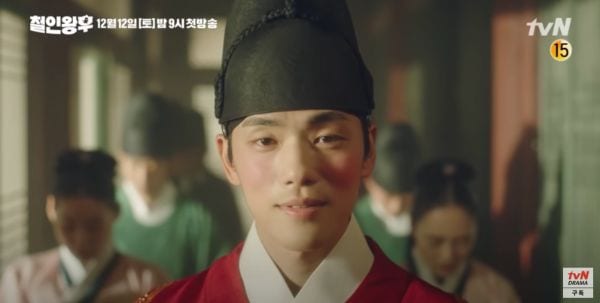 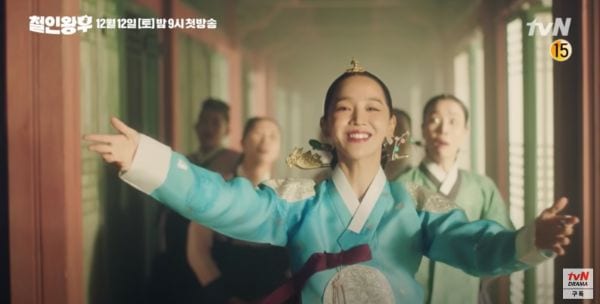 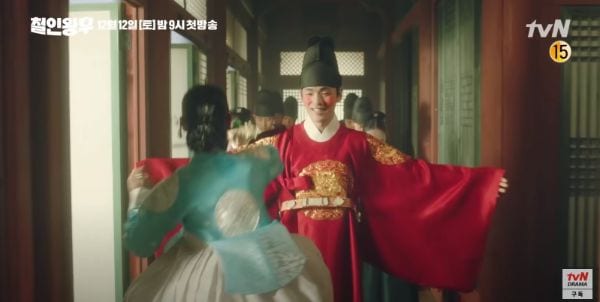 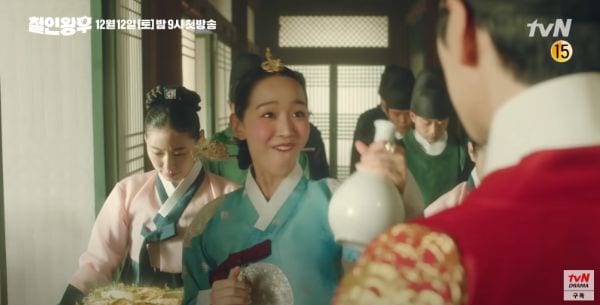 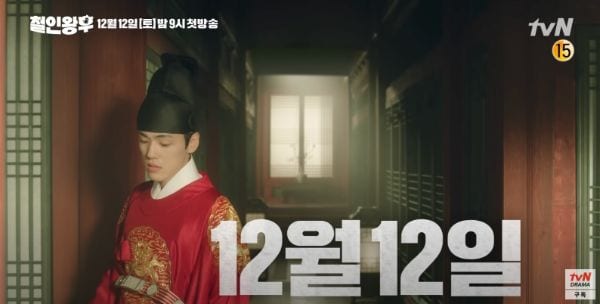 Gosh these two are gonna be so cute I can already feel it!! I love that this is a comedy drama and can already imagine the hilarious interactions they’re gonna have

Yes, Kim Jung-hyun is sooo good in comedy! Will definitely check it out.

Aww, so cute. This might not be the best drama of the year, but I bet it'll make me smile a lot. And during these times, that's good enough.

I'm more and more interested in this one!
I've just checked and it's on Viki, so I'll give it a try.

I don't recall hearing anything about the mind/soul of the queen while all this is going on.
Can we get a sequel about how she wakes up in the body of a *gasp* male **double-gasp** COMMONER in modern times?

It would be 3 minutes long. She wouldn't know what cars are and would get hit by the white truck of doom as soon as she went outside.

I want to know who is the chef actor in Shin Hye Sun's body~ The voice sounds like Kim Jung Hyun's voice 😅.

I believe the male chef is Choi Jin Hyuk. There were some photos released a few weeks ago on the set of the drama in chef clothes, along with the news he's making a cameo appreance in the drama. They might also be using Choi Jin Hyuk's voice to portray the male chef in Shin Hye Sun's body 9at least for some scenes)

The chest punch and his reaction! 😂 Looking forward to this drama!

The Queen for Seven Days series main theme is on power greed role on persons metamorphosis! Especially this matter is embossed on high ranking figures so more relatively too. A series on despotism and aristocracy dreadful aftermath!
Of course I have seen only the series one episode for 2 times eagerly so far!
Power greed metamorphoses persons to very diabolic and fiendish and hellish guys spontaneously!
A series on improper unworthy kings!
I like this attractive and interesting series and I watch it enthusiastically! I love these kinds of interesting and romantic and historical series genres!
The Queen.for.Seven.Days series is very interesting and attractive and entertaining one that I look at its episodes enthusiastically. I have watched its 6 or 7 episodes so far. I like these kinds of series genre a lot. I wish I could watch them originally and without any censorship and dubbing.
Becuse I hate dubbing and censorship a lot.

I have seen 13 episodes of The Queen.for.Seven.Days series eagerly hitherto.
My association of ideas from the series is as follow:
The series main message is on despotism and caste-kind aristocracy systems and their very terrible aftermath on humans behaviors and societies terms.
Despotism and caste-kind aristocracy metamorphose and diabolize persons, especially their high-ranking classes spontaneously!
Despotism creates power greed especially on despots spontaneously and power greed diabolizes and metamorphoses persons automatically.
Life in despotic and aristocratic countries is similar living in hell!
Of course I severely detest aristocracy with any approach, whether it be caste-kind completely or not!
Please pay deep attention that aristocracy is one of middle ages(dark ages)countries main elements!
As soon as aristocracy was faded away in Europe countries, renaissance movement was triumph and Europe countries rescued themselves from more than 1000 years darkness and obscurity and backwardness and oppression automatically!
Instead dynamic democratic systems based on dynamic human right principles are best superb systems for world countries governance!
But despotism synonymize militarism and aristocracy and medievalism and facism,…!
The Queen.for.Seven.Days series narrate Korea past dark eras (namely its feudalism and medievalism epochs)!
Although as this series filmmakers say, the series characters and adventures aren’t documentary and they are the series writers ,…minds creators made!
But the series topics happen in any country with despotic and middle ages and feudalistic,…norms of course with different(mostly lower) acuteness and intensity in practice!
And it isn’t restricted to only Korea country at all!
In any case, The Queen.for.Seven.Days series teach us that despotism and medievalism and (mental and material) feudalism systems diabolize and metamorphose societies and especially their elite strata!
So in order to rescue societies from mere darkness, we must adopt methods that despotic...

I'm excited for this. They look so cute and funny.