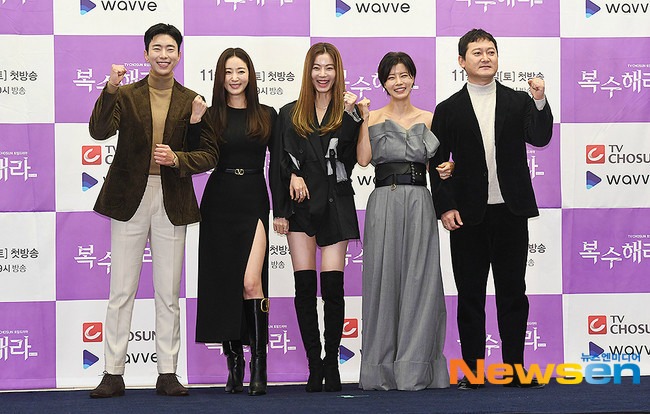 Subpar posters aside, being a huge fan of revenge dramas, I am definitely looking forward to Get Revenge! More than a mere revenge drama, though, it’s being classified as a “social” revenge story — and that’s because it’s the story of a heroine going against the upper crust. Kim Sarang stars as a celebrity influencer who falls from her high perch in society after a fake scandal, and then seeks revenge for said scandal. Yoon Hyun-min plays our hero, and is described as the typical hotshot attorney character we all know so well. But, when his family is ruined, he too seeks revenge at all costs. TV Chosun’s dramas are a little bit all over the map, but their recent Wind and Cloud and Rain surprised both with production quality and ratings, so I have high hopes here. Very high hopes, actually, because who doesn’t love an underdog, whether that’s a cable channel, a cast, or a story of those fighting against powerful evil-doers?

Conflict. I like underdog stories, but I don't necessarily like revenge plots... 😒
Don't know what to do...
Maybe just wait for the reviews...😅

Reading this and got a bit curious as to how many times Yoon Hyun-min has been cast as an attorney...

A bit puzzled by the inconsistency. DB cares enough about this show to give it a "Premier Watch", but not enough to list it in "Prime-Time Shows This Week".

I'm still traumatized by Kim Sa-Rang's acting and english since Secret Garden... So I think I will pass this one.

Why do I feel like though the premise seems promising from the first outlook, that it may fall back to being typical in the last 1/3 of the drama for the sake of fan-service?? 🧐 Oh right, because it’s happened before...

WIND AND CLOUD AND RAIN was great- but this show may not be my cup of tea.

I am a sucker for revenge plots, and so far the first two episodes have not disappointed me. This one seems a bit different perhaps - not just going after evil chaebols, but some all inclusive revenge by rich and poor alike?