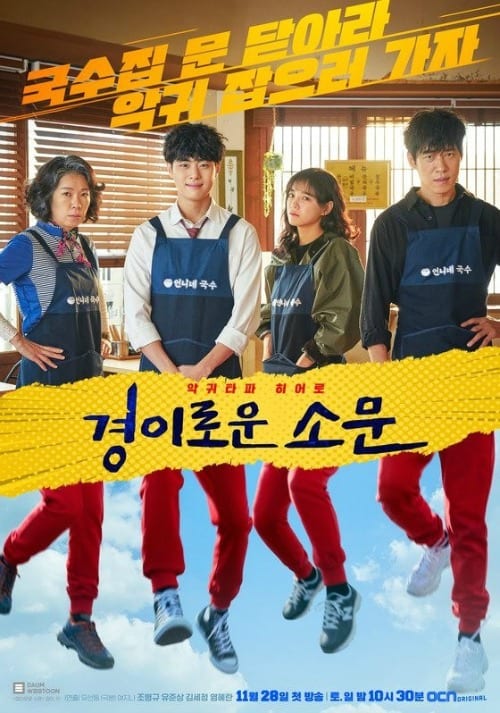 This seems like an interesting choice for OCN! The Uncanny Counter (previously Amazing Rumor) tells the story of four people that work at a noodle restaurant. They seem like normal folks, but in fact they’re actually demon fighters who hunt down and destroy evil. We’ve got Kim Se-jung, Yoo Joon-sang, Yeom Hye-ran, and Jo Bong-kyu in our leading roles, so if nothing else, the casting is interesting. Originally when I saw the early promo material for this show, I assumed our four main characters were a family, which seemed fun, but don’t follow my lead — it seems like they’re just co-workers and co-fighters. On the flip side, maybe this clears the way for some romance between Bong-kyu and Se-jung? (I’m game!) I’m not really sure what to expect from this show, and it probably could go either way, but right now I’m hoping for a compelling story full of matching track suits, secret underground fighters, and slickly choreographed action scenes.

this could be very interesting. at least you won't get all the well worn tropes here!
anything can happen in a workplace! many a girlfriend/boyfriend set up is born. i am curious how they will portray the evil too.

I wasn't paying much attention to this until I noticed the red tracksuit uniform. Action heroes are usually decked out in snazzy suits or tight-fitting clothes. Why NOT comfy tracksuits that gives you full range of motion and doesn't require special handling when you launder them?

Sounds like it's going to be a lot of fun!

This made me laugh out loud, comfy tracksuits indeed.

Where is this streaming in the US?

It will be airing on Netflix.

This really feels like a Mystic Pop-Up Bar spin-off... the lives of demon hunters. Can't wait to watch it, I really hope it will be good. I think it'll be almost the same as MPUB. KDrama fantasy dramas are something else.

I just watched MYSTIC POP UP BAR and loved it. The one degree of separation between COUNTER and MYSTIC is one of my favorites Yeom Hye-ran.

Also o/t YHR was in both LIVE and LIFE.

Love the premise, and that casting could sure do heartfelt as well as wacky (watched Jo Byung-kyu in Running Man before, and he definitely can pull off being weird ><), am so looking forward to watching this.

I just wanted to come back and report that I loved what I saw in THE UNCANNY COUNTER in episodes 1 and half of episode 2 The other half will be watched tonight. The cast already looks like they have great chemistry.
Jo Byung-gyu (at RL age 24) is credibly playing a high school kid.
(He looks like he could be Jang-Seung-jo’s dongsaeng.)